This is a tough one to post. One of my biggest goals, personally, was to shoot a deer with the recurve on public ground. Friday morning I hunted a public spot that I scouted out over the winter. It's a subtle little saddle that connects an oak flat that has a lot of acorns to a thick area I think deer are using to bed. I snuck in early in the morning and got into the tree in my saddle and settled in to wait for day break.

It's hard to see in this pano image, but the path leading up to the left behind me is up the hill, the depression in the saddle is just before the mowed area you can barely see to the right. I expected 0 deer to come from behind me, there's really not much back there.

Just as it was getting light enough to see into the path area, I heard an odd noise and turned and looked over my shoulder. There stood a deer at 25 yards. It was dark enough I couldn't 100% tell if it was a doe or a small buck. It slowly worked its way down the path, and when it was at 12-13 yards (yes, 12-13), I was confident it was a doe. I know that I do not shoot as well in low light. I think it's because I struggle to see the arrow in my peripheral vision, but I convinced myself that she was close enough I could make the shot. She was mostly broadside, I drew back and let fly...and hit her much farther back than I wanted. She bounded off pretty fast, sounded like she ran 80-90 yards and then nothing.

I waited right at 2 hours, climbed down and checked the arrow. Not good. Pass through shot, little blood on the arrow, but it didn't stink like a gut shot arrow usually stinks. I figured I'd start tracking, and if the blood was bad I'd back out and come back in the afternoon. 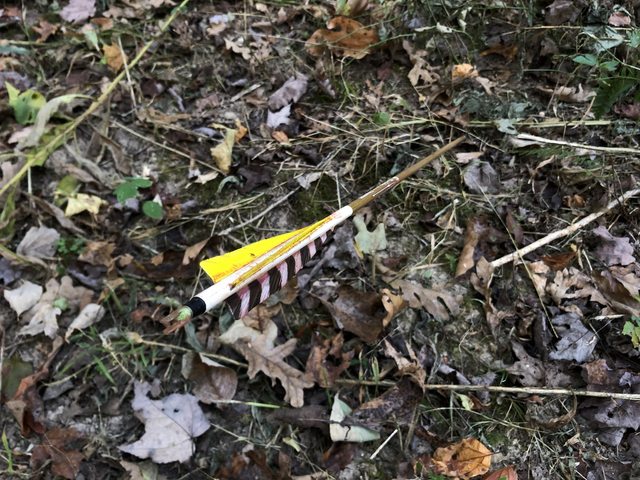 I was kinda shocked that the blood trail was pretty heavy considering she was going fast through the brush. Definitely no lung blood, but she was laying it down fairly well. 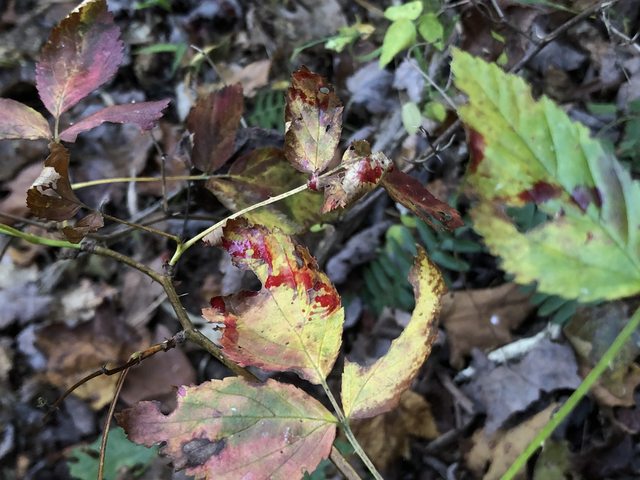 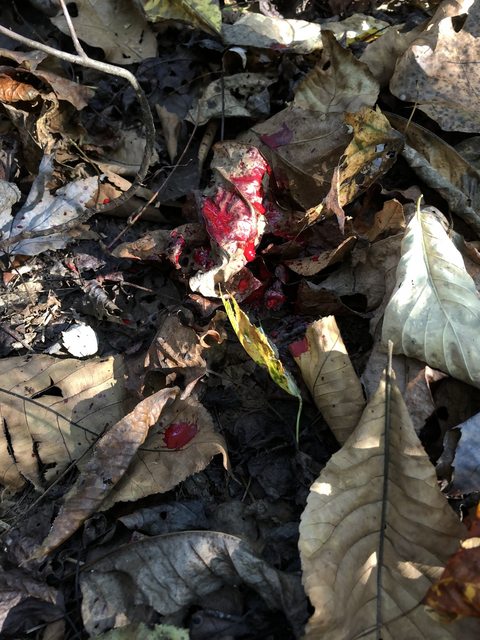 Then, after maybe 60 yards, the blood literally just stopped. I took maybe 10 more steps just to see if I could pick her up along the path she was taking, when I jumped her about 30 yards away. She moved at a fast walk downhill towards the thick stuff. I knew at that point I f*cked up. I got out of there and came back about 2:45PM. It didn't take long to locate her bed where she had laid. Shockingly, there were three DOTS of blood in the bed. I failed to locate any more blood past the bed. I swept through the thick stuff where she went and found nothing, never jumped her again, either. Just to add insult to the whole thing, my first shot as soon as I got home that morning... 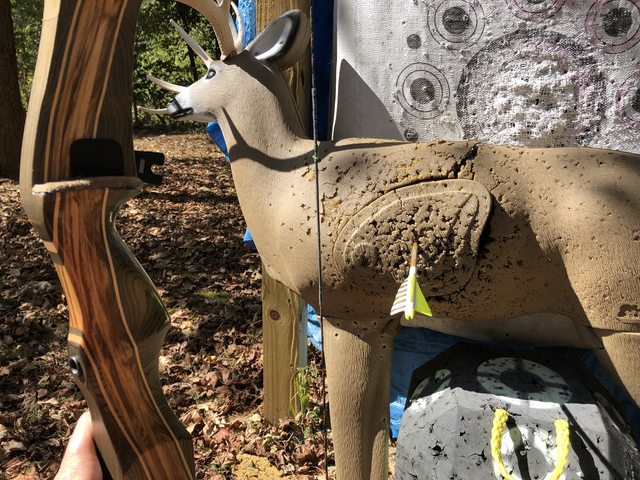 I hate losing deer. And I hate that after nearly a year of hard work, I gacked away the first opportunity I had. To top it off, I further screwed it up by not backing out immediately when the blood stopped. I knew better. I think she's dead, and I think had I just backed out for the morning, I would have found her dead in or near where she was bedded when I jumped her.

Always a tough pill to swallow. Learn from the mistake, regroup, and get back in the saddle. Pun intended...
Likes: Sgt Fury and Creamer

$#IT happens. Are you confident you hit her mid way up/down but just back in the guts? It's very possible you only clipped her, even though she bedded soon after the hit. Deer are tough animals.
Likes: Creamer
C

Big_Holla said:
$#IT happens. Are you confident you hit her mid way up/down but just back in the guts? It's very possible you only clipped her, even though she bedded soon after the hit. Deer are tough animals.
Click to expand...
Up/down looked good to me. Lighted nock so I was able to see it pretty well.
Likes: Big_Holla

Shit does happen. I'd say that deer is dead too, some pictures the blood looks dark like a liver shot. Sounds like you jumped her fairly close which would also point to a liver shot. Just keep at it and follow your plan next time, cause you had it all right but let your mind mess ya up in continuing.
Either way congratulations on connecting with trad gear. That's a big accomplishment in itself. Something I've wanted to do, just haven't put in the hours.
Likes: 5Cent and Creamer

Happens to all of us man, get back at it!
Likes: Creamer

Sorry to hear @Creamer , but just like the others said, "Shit happens".

I'm sure those yotes will have a good meal.

You'll get the next one no doubt!
Likes: Sgt Fury and Creamer

Sucks but ya gotta put it behind you. Get back in the saddle and remember ...anchor tight and pick a spot and it will all come together.
Likes: aholdren, OHIOOutdoors2, xbowguy and 2 others

Two kinds of guys miss. Those that do and those that lie about it.... the ones lying did not learn anything. I'll bet money you kill the next one!
Likes: aholdren, Hortontoter, 5Cent and 3 others

Sorry to hear that. I know it’s a tough pill to swallow. Jump right back in the saddle (literally) and get back after it. Good luck on the next one!
Likes: xbowguy and Creamer

Hate to hear it Jeff, but as others have said and as you well know, it happens to all of us at some point. Doesn't make it feel any better, but at least you're not alone!
Likes: Creamer
C

I did the only thing I knew to do and jumped back on the damn horse. I sat in the blind yesterday all afternoon in the rain waiting for the predicted window in the rain from about 4PM-dark. That happened, but the deer never moved where I was sitting. 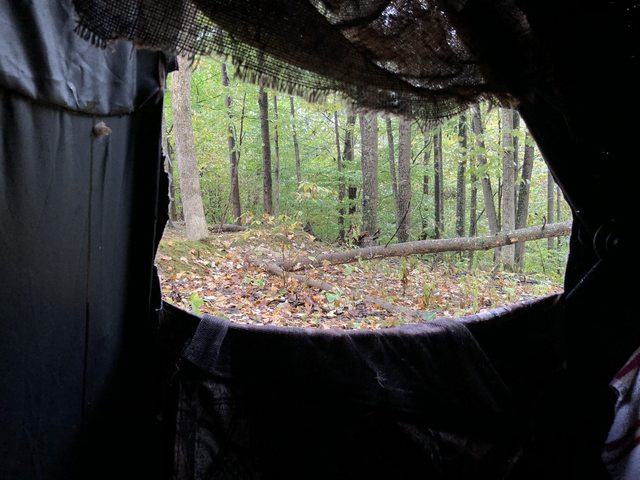 Same head I shot through the doe. Sharpened, spun it, good to go for some redemption. 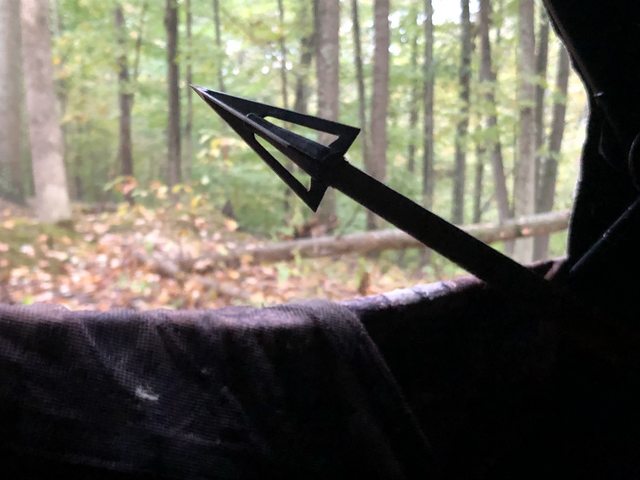 I told someone once "this year I'm gonna try to shoot one on the ground with a trad bow". his response was "Fuck yeah, gut shot a half dozen of them, You'll get the hang of it, its a blast!"

With that said, you have 5 more
Likes: jagermeister, Creamer and Chass

Jackalope said:
I told someone once "this year I'm gonna try to shoot one on the ground with a trad bow". his response was "Fuck yeah, gut shot a half dozen of them, You'll get the hang of it, its a blast!"

With that said, you have 5 more
Click to expand...
Genius
Likes: Creamer, OhioWhiteTails and Jackalope
S

Man I am sorry to hear this
But it happens, learn and move on
you have put in a ton of work shooting and tuning that bow. it will all come together next time.
Likes: hickslawns, Boarhead and Creamer

Keep after it Jeff.
Likes: Creamer

well, that sucks Creamer. you are playing an entirely different game now with your choice of equipment. in doing so, you made a conscious decision to seek opportunities, not advantage, with your weapon of choice. you purposefully handicapped yourself, which is admirable. no such thing as a "slam dunk" with traditional equipment. even the close, easy shots we strive for are difficult. Clearly, you are determined, and that is the whole game, imo. keep trying, and you will get another opportunity. Howard Hill called it "hunting the hard way" for good reason.
Likes: hickslawns, OHIOOutdoors2, Creamer and 1 other person

Jackalope said:
I told someone once "this year I'm gonna try to shoot one on the ground with a trad bow". his response was "Fuck yeah, gut shot a half dozen of them, You'll get the hang of it, its a blast!"

With that said, you have 5 more
Click to expand...
asinine. disgraceful. repugnant.
Likes: switchhitter