"and now for something sompleatly different"

Saw this elsewhere but it was to Cool not to post here...Anvil Shooting!

You just never know what kind of hobbies people get into. That was pretty cool!

That was SWEET. I love improvised weapons! I want to do it in a field full of chickens...is that wrong?

Did you catch that he is a respiratory therapist? Kaiser is going to be that crazy in a few years, he already has got the beard!

zacks already half way there,..

Holy Cow!
Have you tried to Google it???
Theres all kinds of stuff on it!!!

And to think I thought Pumpkin Chucken was cool...

Even in this book, it's going too far to call anvil shooting a sport, but Gene Mulloy, an old-time blacksmithing buff and co-founder of the World Anvil Shooting Society definitely disagrees. You see, in 1994 he organized the first anvil shooting competition in the nation, which has become an annual event at Laurel's Wood Expo held every April. "Anvil shooting dates back to the Civil War," he says, "when all them damn Yanks came through the South destroying all of our metal-working capabilities. They'd put powder underneath the anvils and try to blow them up. And up they went, up in the air." Now a small group of explosion enthusiasts from Mississippi and area states gather to compete for bragging rights in the South.

The rules are simple: shooters' anvils must be made of steel, weigh at least 100 pounds and no more than 2 pounds of black powder can be used to send that thing soaring. Two classes exist, those who shoot Traditional and those who shoot Super Modified. In the Traditional class, shooters use real, antique anvils. At the base of every anvil there is a hollow spot, where powder and a 90-second cannon fuse are packed. Then a second anvil is placed on top of the first. Once the fuse is ignited, the shooter has to haul ass to make it out of the 300-foot danger zone. "The first time I shot it went about two feet high," Mulloy admits. While anvils shot the traditional way now reach heights up to 100 feet, for some that just wasn't high enough -- hence the humble beginnings of the Super-Modified category. Not only can shooters in this class smith their own specialty anvils, but they are shot from heavy base plates that enhance height and accuracy.

At the beginning, Mulloy had trouble deciding how to measure height. "The first year, we tried tying a fishing line from a rod and reel to the anvil," he says. "But it just blew that thing all to heck." Then he got a little more sophisticated, had some local mathematicians clock the airtime. But that wasn't very accurate. Now he uses surveying equipment that offers precise readings. Then there's accuracy, which is measured by how far away from the launch pad the anvil lands. As odd as it seems, no one has ever been crushed by a falling anvil and no one has ever lost an arm to explosives.

While Mulloy calls himself the #1 anvil shooter in America, he doesn't hold the world record. You can say it's a sore spot. The world record is just over 400 feet and held by rival Mike Stringer. In fact, the competition is so heated between these two that Mulloy recently played a cruel trick on Stringer. He built an illegal aluminum alloy anvil that he shot over 800 feet. "His reaction was gorgeous," Mulloy says. "It was priceless. And we got it all on video. It still rubs him raw when I tell him I have the world record." Admission to the Expo is $2. 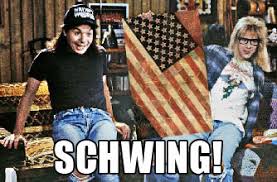