Finally! A chance to sit down and share a story!!! :smiley_carnaval:

This past weekend could possibly have been one of the best stretches of hunting I have ever been around. The weekend kicked off Thursday when Randy and his buddies Joel and Mickey had a great hunt at the farm. Friday proved to be another great day of hunting with Joel decoying in a P&Y 8 that he missed, while Mickey saw a shooter cruise past one of my new stand sets. Later that evening, we were joined by Wayne. After a few beers, we were ready for Saturday. Little did we know that it would be the start of three days of deer hunting pandemonium!

I started my weekend of hunting by sitting a stand located along a shelf adjacent to a thick creek bottom and cut beans on what I was considering to be my best farm. The plan was to sit all day, but after four deerless hours on stand, I decided to head back to civilization and see how the morning went for Wayne and the other. During my first skunked hunt of the year, things were going crazy behind my parent’s house and at our farm. Talk about rubbing sale in the wound!!! I spent my lunch break moping around the house before deciding to join Randy and the boys at the farm. Knowing I had pictures of a deer we now call “Moe” not far from a great observation stand, I decided to sit that stand and keep an eye on movement around the intersection of two creek bottoms. (I’ll go into more detail on this in another thread with more pics of Moe.)

Not long after I settled into the stand, deer started piling into the creek bottom. Around 6PM, I heard grunting on the ridge across from me and managed to locate Moe in the Bushnells as he dropped off the ridge and hit the shelf directly across from me. I listened to him rake his antlers in a scrape, sling dirt, grunt, and rub a tree for almost 10 minutes. Once he finished his display of rutting prowess, he dropped into the creek bottom 70 yards away. For almost 30 minutes, he milled around eating corn in front of my camera. Shortly after this pic was snapped, he strolled in for a drink of water at 44 yards. Thanks to one branch I have been meaning to trim for two months, I had no shot at Moe. All told, I saw 4 does and 3 bucks that night and had an encounter with a great buck that now becomes the primary target for me and my hired gun Tracie! 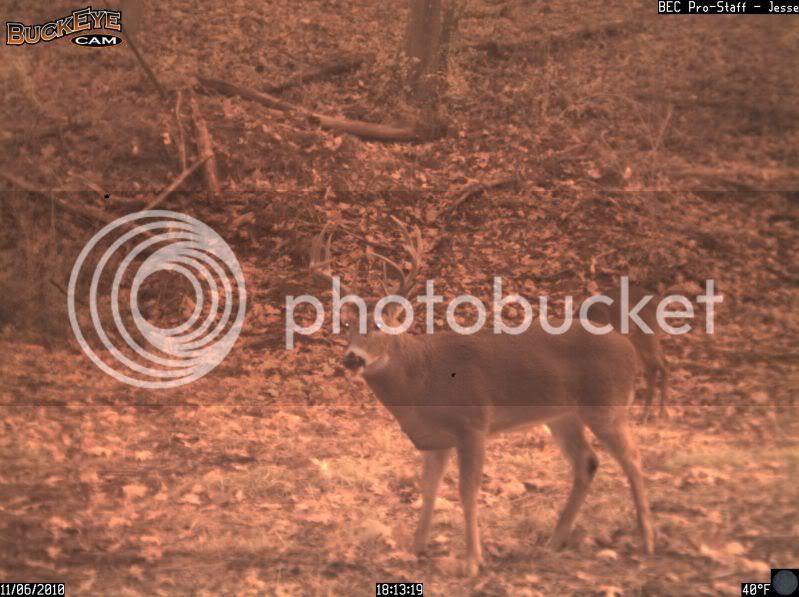 I met up with Wayne after dark and listened to him tell me about seeing 14 deer that morning, including missing a nice buck and seeing another monster behind my parents house. At this point, I knew I needed to abandon my “good farm” and spend the next two days hunting the two properties I know best. That night, we enjoyed an outstanding fish fry that was topped off by the recovery of my cousin PJ’s first bow kill/buck. (More on that in another thread.) After we recovered PJ’s deer, the celebration was on and we made the decision to enjoy our night and hit it hard Sunday night.

I rolled out of bed around 10AM Sunday and started listening to my gut. My parents only own 10 acres, but it is the right 10 acres and it had been good to me in the past. Knowing what Wayne had seen from the platform blind Saturday, I decided to hang in a tree I’ve long wished I had a stand in. So I headed out around 1:30 with the Millennium and LW sticks to climb a tree 70 yards north of the platform blind in a subtle, but now well understood pinch point. Once I settled in, I enjoyed a brief siesta before the deer started to grace my presence. After watching two doe fawns for nearly an hour in the food plot, I caught movement of a huge doe coming down the four-wheeler path 50 yards behind my stand. Within seconds, I heard a deep grunt and turned to see a huge bodied buck standing directly downwind of my stand at 45 yards staring into the food plot. The buck had a broken left main beam and two broken tines on his right side, so I decided to let him go if he gave me a shot despite him obviously being a very mature buck. Right at last light, all the deer moved off and slipped out of the stand knowing tomorrow would be a great sit.

I returned right at first light the following morning using the breaking dawn to keep an eye out for deer as I slipped back into the stand. Within 30 minutes, I had deer on the move. The first deer of the morning was the big buck with the busted rack from the night before. He cut across the overgrown field and entered the woods near my standing giving me a 30 yard shot in the process. I spent the next two hours watching deer nearly the entire time. By 9:30, things had slowed down and I started to doze off. At 10, I heard movement in the creek bottom and opened my eyes to see the left side of my buck’s rack sticking out from the side of a tree at 40 yards. In one movement, I was standing, bow in hand, release attached, tension on the string, and a focusing on my shooting lane. I should have put the binos on this deer and it caused me a little bit of heart ache when it was all said and done with.

Seconds after I picked out my lane, he was in it and a bleat stopped him a second too late, leaving a tree in line with his vitals and his rack obscured. I leaned out from the tree and slipped a Slick Trick Magnum tipped Easton through his liver and both lungs at 30 steps. He ran directly from my 9 o’clock in a counter clock wise route to my 3 o’clock where he expired 20 feet from my tree, and within 20 yards of where my buck from 2008 died. After a quick “Thank You” to the good Lord and some fist pumps, I climbed down to check him out.

I instantly recognized the deer from past trail cam pics and the twinge of ground shrinkage set in. While I do believe this deer is 3.5 years old, he’s not the caliber of deer I originally thought he was. I am still very thankful for the harvest as I learned a valuable lesson, while still enjoying a great morning in the woods. After another quick prayer, I gathered my gear and headed back to the house to get Tracie. The rest of the day was spent taking pictures, field dressing, tagging the deer in, and getting him to the processor. He dressed out at 175 pounds and sported 9 points. I’m going to do a European mount on him and hope to have that done soon. We took several pictures, here are some of my favorites… 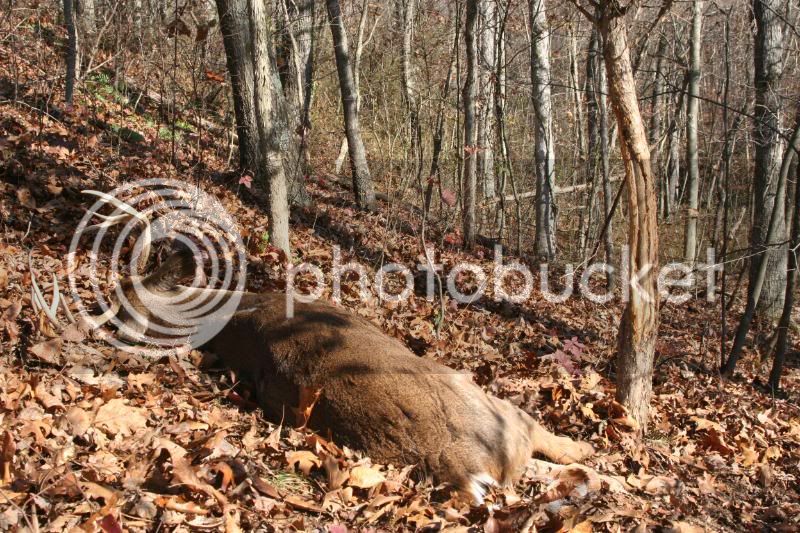 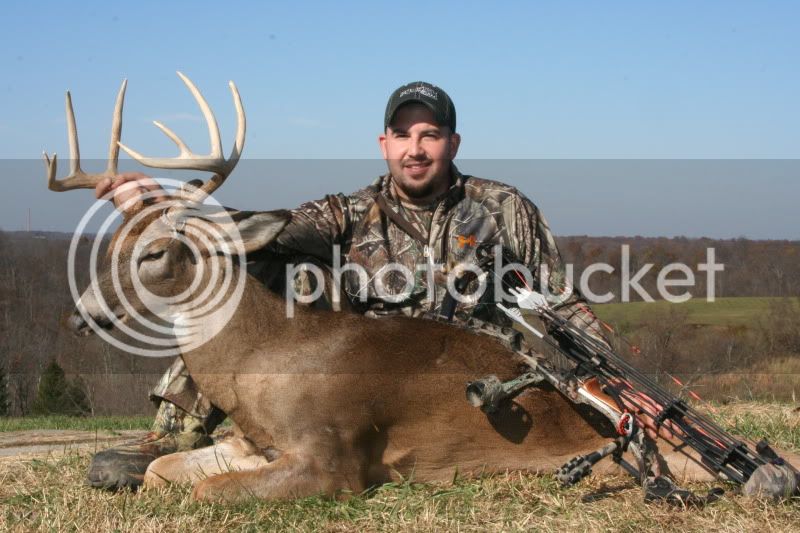 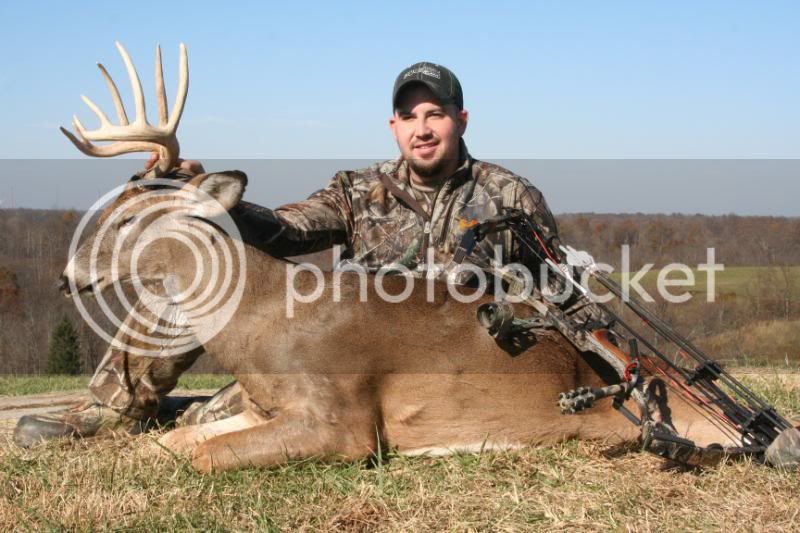 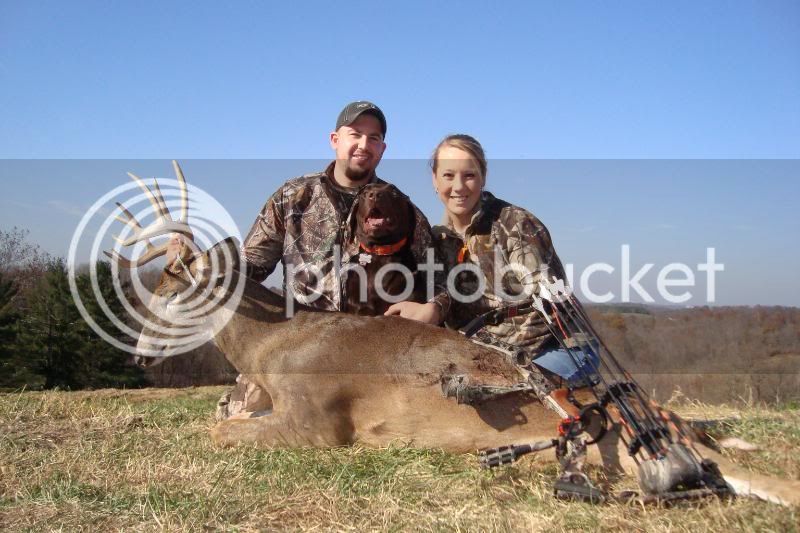 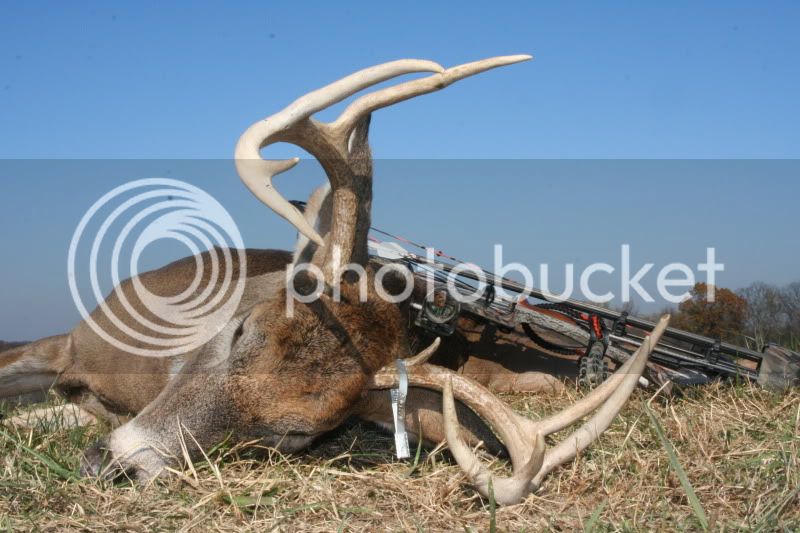 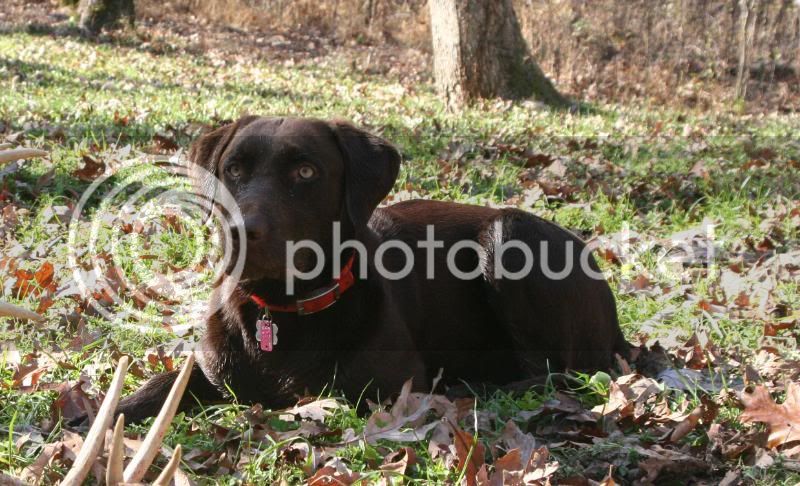 Hours before his demise… 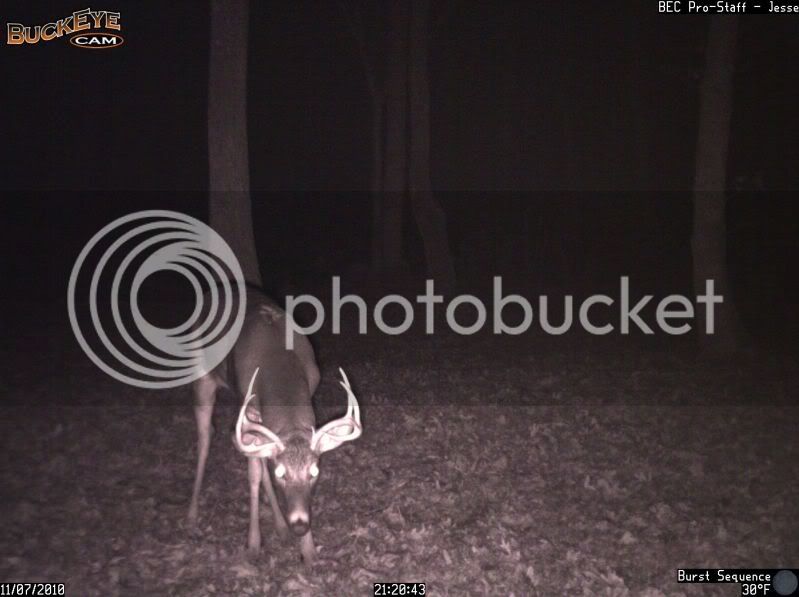 As always, great read Jesse. I'm glad your hard work paid off with this deer and I look forward to seeing and hearing about the rest of your season, putting Tracie on a buck, whatever happens with CR, Greg, and the rest of the gang.

Nicely done Jesse!
Very good write. I got to go on another deer hunting adventure thanks to you guys on TOO. Thanks. :smile:
U

You got some skills in the writing and hunting departments! Good job man!

Nicely done thru and thru

Great read as always buddy. Congrats on a great buck Jesse. He might not be a CR or Jr. but a respectable buck in his own rights and one to be proud of.

I like the pics as well. I think the best ones are the family pic and the one with a close up of the buck and bow .

Great story and pictures to go along with it Jesse. I guess all that karma finally paid off. Now you can sleep in on those cold mornings, and hit up the late season duck hunting like you want to, and try to get other people on deer. IMO, there's not a person more deserving than yourself. Congrats buddy!

Great story Jesse. Thanks for the writeup. Great pictures and a great buck! Congrats again!

Great story and Congrats on a great buck Jesse. As always a great read.

It is amazing how spotting a little bit of bone can get you so worked up in such a short time period, :smiley_crazy: but I guess that is why we do this.

Thanks all! This is perhaps the best part of the whole thing. I love sharing the story as much as sending the arrow on its way. Its the gift that keeps on giving...


Fluteman said:
Great story and pictures to go along with it Jesse. I guess all that karma finally paid off. Now you can sleep in on those cold mornings, and hit up the late season duck hunting like you want to, and try to get other people on deer. IMO, there's not a person more deserving than yourself. Congrats buddy!
Click to expand...


Thanks brother. But you sir, are every bit as derserving. I'm pulling for you right now. I wanna be there for the recovery, that's all I ask!!!

bowhunter1023 said:
Thanks all! This is perhaps the best part of the whole thing. I love sharing the story as much as sending the arrow on its way. Its the gift that keeps on giving...

Thanks brother. But you sir, are every bit as derserving. I'm pulling for you right now. I wanna be there for the recovery, that's all I ask!!!
Click to expand...


Says a ton about your guys' friendship.