An Amateurs Take On His First Longbeard

It was the spring of 2017 and I was pulling trail cameras in one of my favorite spots to shed hunt anxiously waiting to get home and see if any bucks have shed yet. I look around for some sheds with no success and head home. I get the computer out and pop in my SD –card. As I flip through the pictures it’s like any other time; doe, doe, squirrel, buck, doe, then bam, there it was, a video of 8 toms strutting right in front of my camera. I watched it over and over in disbelief, then the next one, and the next one was the same thing! This got me so excited I forgot all about looking for shed bucks on the SD-card. I hurry to get my wife and show her but she didn’t seem as excited as me! I called a few buddies to tell them and set out on a journey to get my first Tom.

In the beginning, I tried to learn everything I could from YouTube, podcast, and reading. Turkey hunting is something that has been reintroduced in my area so it’s not a very popular animal to hunt. This made it challenging because not many people could offer advice like they can for someone going out to deer hunt for the first time. I believe last year we only had 24 birds taken in my county and we only have a spring season. I spent all summer learning mouth calls and figuring out how to use decoys. I’m sure my wife was going crazy with all the practice, I know my dog surly was. As I continued to check my cameras to monitor the deer in the summer I eagerly waited for more turkey but had no luck. Fall came around and of course, the only thing on any hunters' mind is deer season and the rut! One day while sitting in a new stand I hear all kinds of noise coming from the creek bottom. I’m glancing around trying to spot what sounds like a heard of deer. Then there they were, about 25 turkeys came right under my stand and out into the field. I’m checking each one for a beard and I see about 8 with what I guess to be about 10-inch beards. Then all a sudden the toms start strutting right in front of me. To say I was excited is an understatement! I forgot all about deer hunting! I watched them carry on that night till dusk then roost in a nearby woods. The next morning I head out to the same stand and just as the sun was coming up the gobbling started. I pulled out my phone and started recording and sent it to my buddy Dusty who I assist with running our YouTube and Facebook page “whitetailjunkys”.

Spring of 2018 I ran trail cameras everywhere I think turkey would be and was getting closer but not right where they were consistently. I continued to read TheohioOutdoors, watch YouTube mainly the hunting public, carefully watching how they pick apart new areas. Opening day comes and dusty, his son Landon, and myself all sit on the ground with decoys in front of us listing, watching, waiting. Nothing. We were a bit disappointed but did not give up. Dusty had another spot along a river he wanted to check since we both took the day off and we were determined to get a bird. A few minutes after he leaves my phone rings and he calls. He says you're never gonna believe this, there’s a Tom strutting 200 yards from the back of one of the woods we hunt! He watched till it disappeared. We spent as much time as we could that spring trying to get one with no luck. Again in the fall I got covered with birds every time I sat in a few stands in a certain area, but in the spring they where nowhere to be found.

In March of 2019 while out shed hunting I would take a turkey call with me and hit it here and there then listen for a response. After a few places of nothing I figured I was either terrible or they traveled somewhere different then what I had permission for in the spring. One day while walking a fence row back to a small thicket I hunt looking for sheds I hit the call and actually got a response! I wait a few minutes and again a hen responded. I pull out my binoculars and start glassing and spot 2 hens in the field ahead. I immediately go back and get a trail cam from the truck and watch them until they are out of sight. I sneak in and hang a camera and wait for opening day. Opening day comes and I get tucked against a tree about 4:45 am full of excitement. I was sitting over 5 decoys in the field. I only had the first 2 days of season off so I wanted to be in the best spot I could. As the sun started to come up and the woods come to life I patiently waited to hear or see a bird, but nothing showed. About 9:00 I heard a Tom gobble in the distance and knew I was closer. I hunted till noon with no luck and went for a drive. I spotted some toms about a half-mile away. I knew I was getting closer now to seal the deal. I called Dusty to bounce some ideas off him as he was at work and could not get off. I came up with a plan and told myself tomorrow will be the day.

Tuesday morning comes and I get tucked in closer to the creek bottom and only set 1 lonely hen decoy out in the field. As I waited for the sun to come up a Tom starts gobbling at every little sound he hears. He sounds like he’s right above me! At this point, I try my hardest to calm my excitement. As it gets just light enough to see I start looking in trees but can’t find him. Then he gets quite. I eagerly await looking cautiously around. Then I hear him fly out of the roost. I spot him about 30 yards away. He notices my decoy and locks in. I watch through the red dot on my 12 gauge just waiting. I didn’t even let him make it to the field as soon as I seen his head I squeezed the trigger. He dropped in his tracks. The excitement and emotion were high I called my wife 3 times in a row till she answered. She asked what was wrong and I said: “I got one”! She was just as excited as I was. We made plans to take it to taxidermist but she had to work some that morning. I remember going to my in-laws to have my brother in-law take some pictures for me and called all my buddies. I took it to one of my good friends house to show him, then to Dusty’s work. My wife got off around noon and we picked up my daughter Addilyn. As we took the tom to the taxidermist she was just as excited as me. He scored it at 33lbs with a 10 and a half-inch beard and inch and a half spurs. I was only going to do a fan and beard mount for my first one. The wife had other intentions and said “why don’t you get a half body mount:, I wasn’t going to argue.


Lots of excitement and emotion went into that bird. It was all worth it and I can’t wait to see what the spring of 2020 holds. 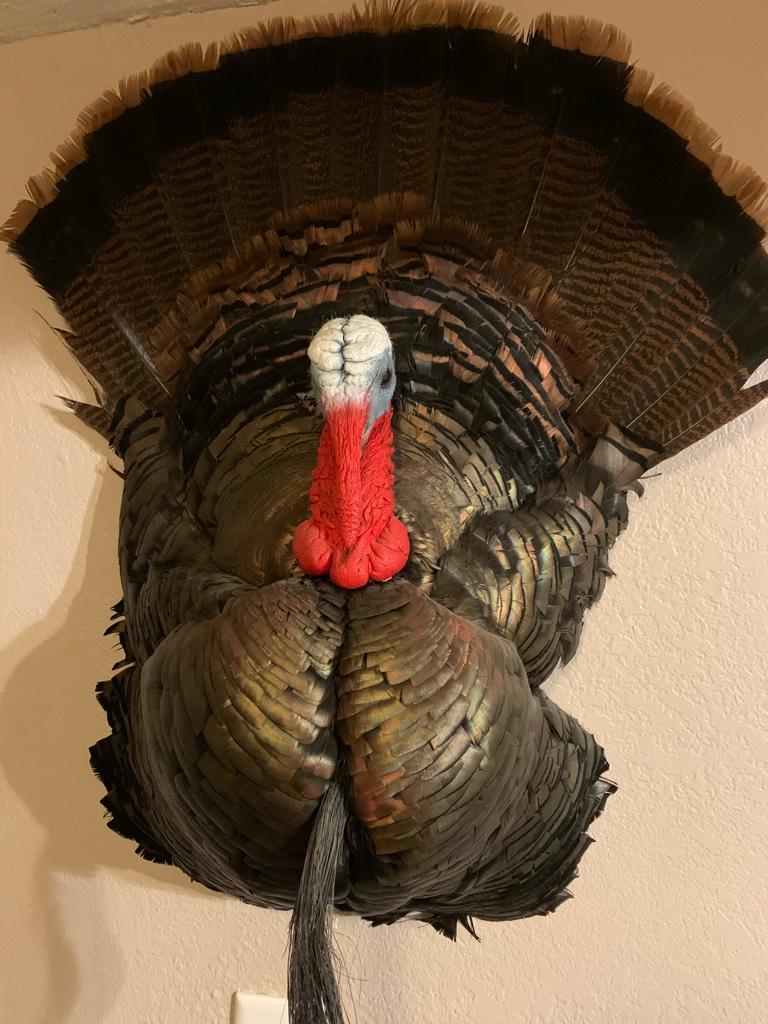 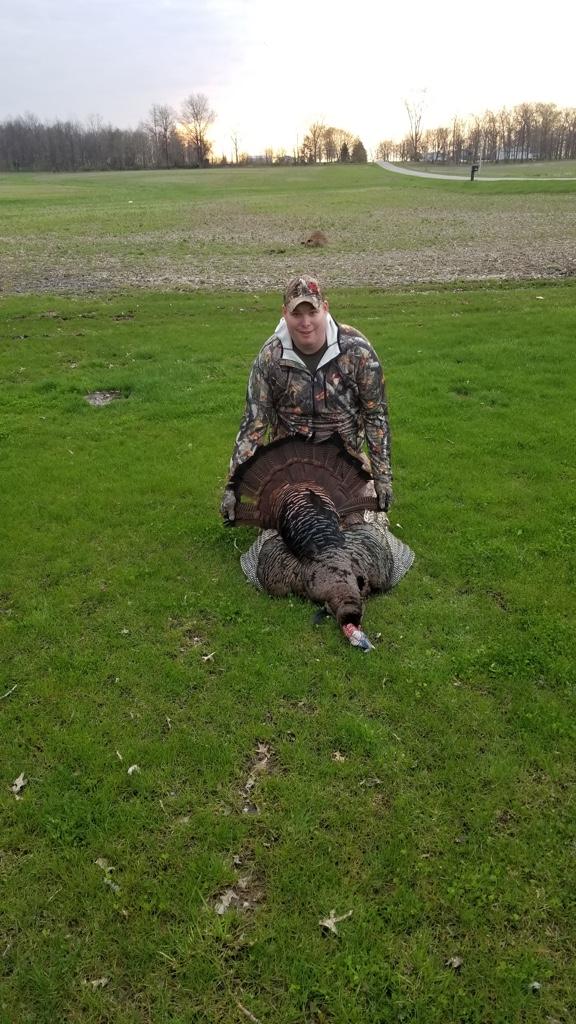 Congratulations. Great write up too. Thanks for taking me along

Nice write up Ryan. Congrats on a nice bird. Ill be trying to get my first turkey this spring in Kentucky.
Reactions: hickslawns, whitetailjunky3 and Fletch

Congrats on the bird, helluva ride with that one!!!!

Congrats. Thanks for sharing.
Reactions: whitetailjunky3

Nope, no way. You ain’t gonna talk me into buying a tag again this year. I won’t fall for it again.
Reactions: hickslawns and whitetailjunky3

Guess what I printed off last night...
Reactions: whitetailjunky3

Nice story. They can be a lot of fun to listen to and watch. Can also be pretty frustrating. Good luck this season. Congrats on a monster of a first bird.
Reactions: whitetailjunky3

giles said:
Guess what I printed off last night...
Click to expand...

You got another tag didn’t you lol. I’m excited this year because I’m going to try to do my first tail and beard mount if I get one!
Reactions: giles

Dustinb80 said:
Nice write up Ryan. Congrats on a nice bird. Ill be trying to get my first turkey this spring in Kentucky.
Click to expand...

whitetailjunky3 said:
You got another tag didn’t you lol. I’m excited this year because I’m going to try to do my first tail and beard mount if I get one!
Click to expand...