Well after yesterday morning to two pm hunt of lake effect snow bands and 4 degree chill factors in a tree stand, I hoofed home, grabbed the pop up shelter I got for x-mas and headed back down the woods. I was troubled because the ladder stand was 60 yards from the tree stand I wanted to be in. At noon between snow flakes (heavy) I counted 10-12 doe's come by the "other stand", mill around then head south. I only had 1 shooting lane to snake a round through and never saw the shot...
(I had intended to use the ground blind next year and set it up, brush it in and let the deer get use to it but...)

By 2:30 I was back in the woods w/ the friggen shelter backed up to a dead fall and way closer to the Other stand location (w/in 20 yards) It would have been as if someone had put a friggen pop-up tent in the middle of your living room walk way... I knew they liked the red oak acorns and had come to that location for years.

The ground blind was sweet. It kept the chill factror closer to the real temp. by blocking the wind. The shelter freaked out 2 deer just before dark last evening but it beat sitting in a tree.

This morning about 9:30, three doe's came in but again were bothered by the addition to the area. They almost came into a shooting lane but just couldn't deal with the new addition to the food plot. So close... another 8 feet and she would have stepped into the "lane-of-death"(muahhhhaaaaaaaaaaaaaa)

About 10 min to PM this evening, several doe came down the woods feeding along the run that follows the oak trees across the woods.They TOO spotted the pop-up-shelter as they came in at 40 yards. (its not that its a bad camo... Its just new to the deer)
Troubled but curious she came in slowly, circling down wind to try and get a better idea what the hell it was... she almost made it down wind to bust me had she she not paused at 20ish yards in the "LANE_OF_DEATH"

She ran about 75 yards, fell twice, then crashed 20 yards later. Over all I could see her go down from the blind. I waited a bout the time it took me to smoke a Swisser sweet, then walked the 5 min back to the 4 wheeler, drove it home, dropped off the gun, grabbed one of the kids plastic sleds, (hee hee. think they will know?) and drove back down the woods as the last of the days light faded. I field dressed her and drove home leaving a steaming gut pile for the critters and a smile on my face.

Congrats on the doe CJD!

Congrats buddy. Given the little time you get to be home I was waiting for you to be able connect and now the waiting is over :smiley_clap:

Can't wait to see the pics of a fine doe for the freezer .

Awesome Jim! Glad you could make it happen with the little amount of time you get to hunt! Congratulations! 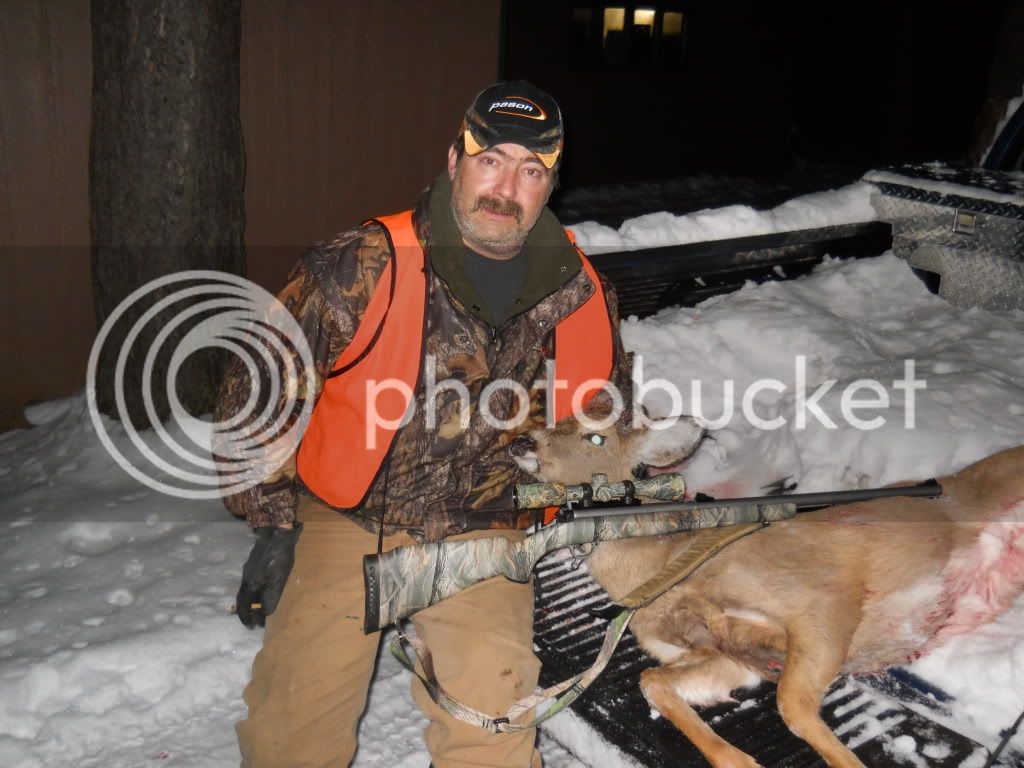 nice! Good amount of snow up there TOO
T

Congrats!
Good read on the story TOO.

I should add that is a fine looking muzzle loader you have as well! Thanks for the picture!

Great write up and a nice doe Jim!

Way to go Big Bro, I m happy for ya. :smiley_coolpeace:

Jim, glad to see you connected.... I know how you like the muzleloaders..... Good to mix it up evey once in a while to connect on one.... Sometimes it takes a little un orthadox methods to mix it and connect... When you heading back????

I was happy to connect!
I have carried the Omega for 2 past seasons w/ no harvest. I was looking at the Hawkin flint lock but felt I needed to take one w/ the Omega. Not much of a shooting challenge though (close range) I'm happy to get out.
Muzzy season is historically brutal in this county... lake effect,single dig. temps and on occasion, deep snow out of 1 storm. I did use the 4 wheeler the day before season to blaze trails in the general woods areas so when I did have to walk , it would cut down on the labor/heart attack/sweat factor. It seemed to pay off. The deer were using the tracks TOO.