I had been working out of town in Chicago rebricking a coke oven. My wife was at home pregnant with our son Zach. Night shift sucked so there wasn't a bunch to do besides drink. Well we got a break from the job and brought our bows back with us. Didn't take long to find an archery range and we were happy campers again before work every day. Then came the fact that we were missing almost all of Ohio's archery season. One day after leaving the bow shop I picked up a Petersons Bowhunting mag and read a story about an organized bowhunt in South Texas for javelina and hogs. We decide we were doing the hunt as we would be laid off by then. Come March, myself, long time bro Jeff, and an idiot from Detroit were headed to Texas.

We came away from that hunt with one javelina and a few misses. I seen a different land that I wasn't used to hunting and animals I had never seen before. It was so cool to be hunting around cactus and rattlesnakes! I was hooked even though i didn't bring back an animal that first year. As a matter of fact, it took me three years to finally draw blood in the brush country.

This hunt started as a javelina hunt where there would be about 200 or so shot each year, all with bows. But there was never more than 10 or so hogs killed. The hogs moved at night and were just taking hold of this ranch. Night hunting was not permitted, and you would hear the hogs waking up when it was time to come in. It didn't take us long to figure out a way to get after the hogs. We started hunting a 6500 acre pasture that was walk, or bike only. All the other pastures had trucks and atv's flying around them. We also got to know some good guys from Texas that taught us a few things about hogs.

We started concentrating our efforts on water & mud. I had found a dried up creek system that still was holding puddles here and there. It was way off the roads that the rest were hunting and was full of hog tracks. Next thing I need to do was figure out how to hunt it. Being a twenty foot off the ground guy from Ohio wasn't helping here. I decided to cut in a ground blind in some tall brown grass and hope no snakes would be waiting for me. Sure as shit about an hour before dark I hear squeals coming through the bush. I'm on my knees with a bow and about to encounter wild pigs at face level. Now I'm picturing a big old boar coming up that creek ready to mow me down the first time the wind shifts and he smells my nasty ass. Instead two young sows and about twenty piglets come into view. My heart was still racing a mile a minute and I'm trying to pick out one of the sows. It didn't take but seconds and I had a sow slightly quartered to me at 8 yards. I drew back and settled my pin on her neck. That should give me an exit right tight behind the offside shoulder.

To this day I don't remember releasing the string. All I remember is seeing my arrow bury in her neck. She made a high pitched squeal and all hell broke loose as the other pigs scattered. She made it a total of twenty yards before she ran into a big prickly pear and piled up in front of me. After skinning and gutting her we seen I took out the top of the heart!

This was the start of my hog hunting addiction. 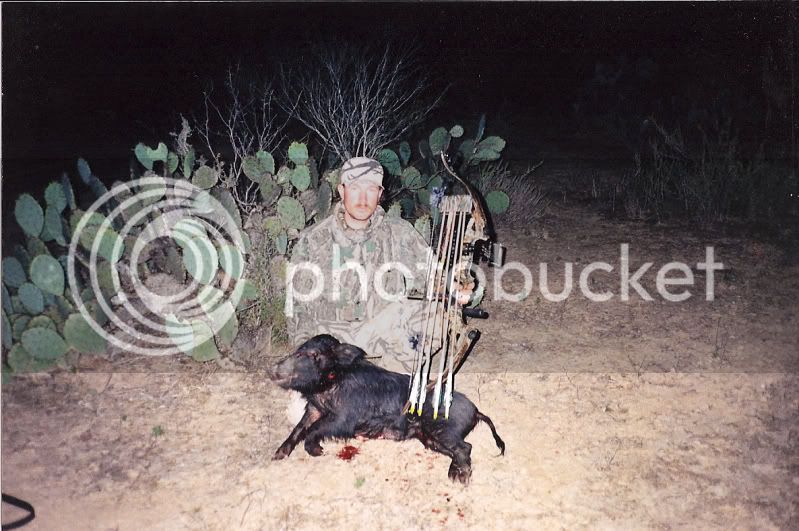 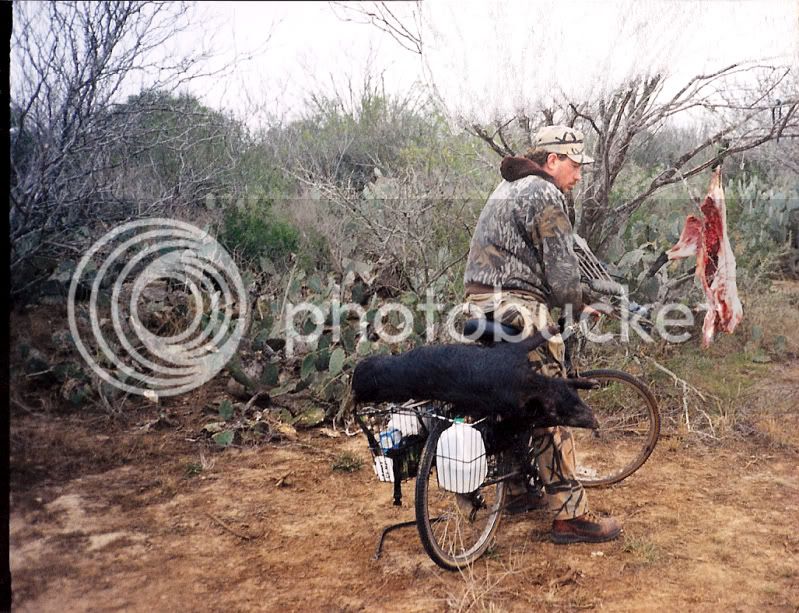 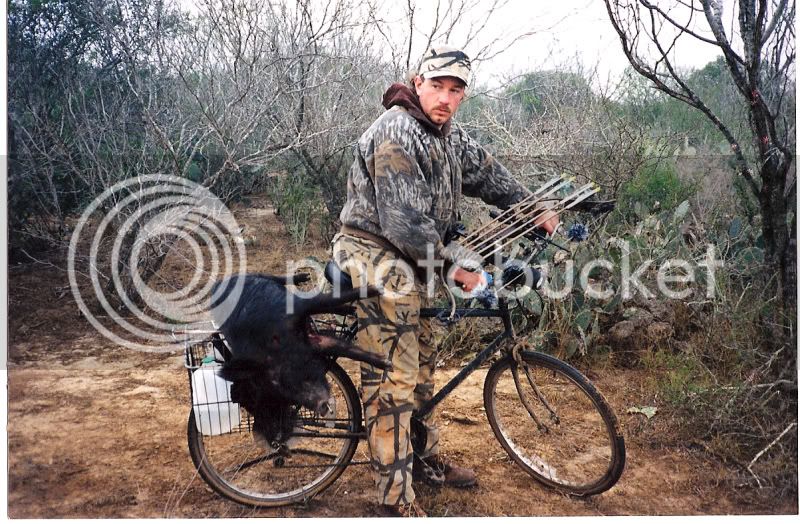 1. You should probably explain to most what a coke oven is. I know what it is.
2. Nice Huffy bike you have there. Was that your Mom's old paper route bike with the basket?
3. When you hiring? I'm armed ready and willing. I'll even order a cold steel spear.
R

That's sweet man. Last year I had a good buddy shoot a big old sow (I forget how much but it was big) in Oklahoma and a guy from college here shot a 250# on in California. Sweet stuff, I think it'd be fun. I won't hijack your thread but here are their pics: 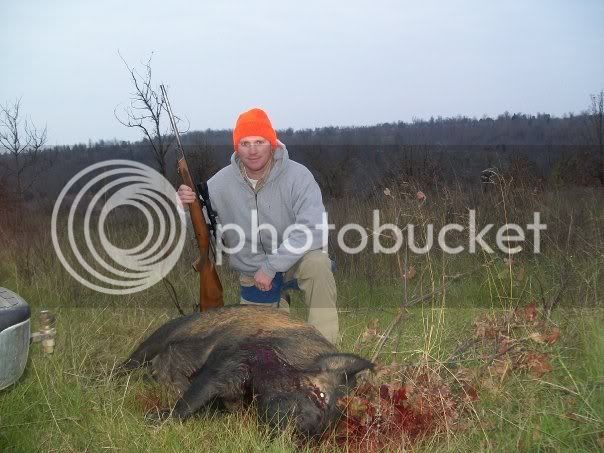 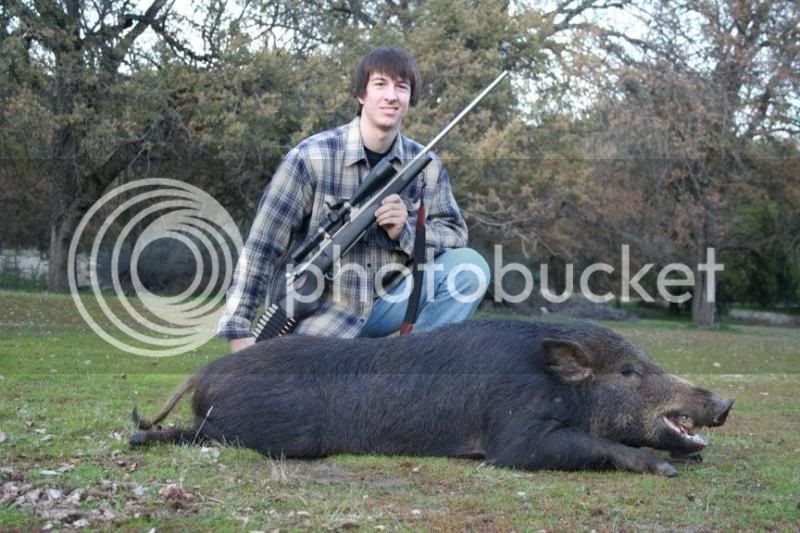 My other hunting buddy's (the ones that did the elk hunting in AZ) have also been out there for piggies and they said that its very difficult to judge the distance of the shots after being used to hunting in Ohio - it's just a different game out there in that terrain.

i have threatened to start something like this badger...keep after it man. hope to be there some day..

Thanks for sharing Badger. By the way, is that a mullet you were sporting? Hard to tell with the hood. "Business in the front, party in the back!"

No mullet here my friend! I grew up with the nappiest head on the block. I've never questioned where it came from.

Thanks for the replies. There's a good chance I'll be sharing lots more in the hog hunting department.

Great story Badger.
I've only killed 2 in Florida. They can get kinda pissy.

Keep up the stories!

CJD3 said:
Great story Badger.
I've only killed 2 in Florida. They can get kinda pissy.

Hey CJ, where abouts in Florida?

Those are some nice hogs Steve!

Good story....the bike makes it for sure lol

Great story and pics badger. Gotta love the " Back in the day " pics .

A buddy of mine wants me to come down to Lakeland, Florida and hunt some hogs with him and his friends lol. They don't use guns to kill them. They let the catch dogs out and run in and grab the hog by the back leg roll them onto the ground put a knee in their neck and tie up the legs. Toss them into the back of the truck and head for the next hog. They grab as many as they can and head back to the farm and cut the throats and hang them up to butcher. Craziness lol.

Great story... Is that a Pee Wee Herman bike?