Well, let me start by saying, I havent meant to be unsociable lately, I know I havent been posting much. My work schedule has me getting up at 2:30 AM and getting home around 5:30 PM. This past week and a half I have been going to the woods after work so I have been getting home in time to eat, shower, and go to bed. So I can do it all again in a couple hours.

That being said, I did whack one with a slug last year, but I had a real goal of puting my first bow kill on the ground this year. Last night... mission accomplished.

I was hunting the same farm capt. Ernie was on thursday. He was sitting in my ladder stand on the north side of a northwest inside corner of a cut cornfield. When I got there around 3:00 yesterday I decided to put a climber up on the west side of that same corner. there is a quad path that enters the woods right there and the deer use that path quite a bit. My stand was situated with my back to the cornfield, facing an open area with several acorn dropping oaks, and a couple different trails moving through.

At about 4:30 a dip stick in a pickup truck showed up, and of course, fired up a chainsaw and started cutting wood on the opposite corner of the cornfield. By 6:00 I was ready to call it a day, I did'nt figure I'd see anything with the chainsaw running, but decided, WTF, I'm here, there is only an hour or so of daylight to go, I'd might as well stick it out. About ten minutes later the guy finished cutting wood and left, and within 10 minutes I caught movement to my left. It was a deer coming up through the woods heading towards the cornfield on my left at about 100 yards or so. I watched it cross a quad path and then lost sight of it in some brush and trees. I wasnt sure weather or not it was going to come my direction or turn south and head to a freshly sprouting winter wheat field, that question was answered a couple minutes later with a doe, skirting the edge of the cornfield behind me.

She was'nt very big, I'm guessing a late fawn from last year, and I debated a little bit. But after passing the doe on tuesday and not getting a shot at that 6 point on wednsday, my desire to get my first bowkill won the debate... It was going to happen.

When she entered my shooting lane she was about 25 yards and walking towards the corner of the field, I was already anchored at full draw and had my sights centered in my peep, I put my 20 yard pin a little high on her and touched the release....I can still see the flight path of the green lighted nock as it dissappeared about dead center of her rib cage... (damnit, I thought to myself, a little back, but still should do the job) thud, jump, kick, run....

To this point, I had been rock steady, stone cold. I listened to the leaves rustling as she stumbled through the woods and I heard her pile up about 30 yards north of me. Thats when the adrenaline took over, I almost fell over I was shaking so bad. Luckily I have a flask of red stag in my pack, A little nerve tonic and it was time to start the search.

Redcloud was already in the woods when I got there that afternoon. I was'nt sure exactly where, but I knew he was in a climber to the north of me. It was going to get dark soon so I called him up and said "Hey man, I might need a little help." His response was "sweet, I was just coming down my tree, I'll be there in a second."

I lowered my gear, came down the tree, locked up my climber, and stepped out into the field just as he was coming round the corner. about 20 minutes had passed so we decided to try and find my arrow and look for the spot she entered the woods before we actually started tracking. The arrow was nowhere to be seen, even with a lighted nock. We figured it must still be in her, which would explain the lack of a blood trail. after spending about 15 minutes looking for the arrow, (which it turns out, deflected and flew another 15 yards or so to the right after a complete pass through) I said, "well, I heard her go down over there, lets keep looking for blood and work our way that direction" Redcloud enered the woods and started that way just as I had to answer my phone, the missus of course. I hung up the phone and stepped into the woods just as he said, "hey, I found your deer."

after tagging it and dragging her out to the middle of the cornfield, it was time to get bloody. The doe I got last year was gut shot, this dressing job was much easier. like I said I got her a little back, got the back of a lung, the liver, and just grazed the gut. I believe the lung filled with blood from the liver and that was that. There was a slight scent of stomach and a little bit of debris around the liver but the gut was still intact enough to allow the whole thing to come out in one package. loaded her up, checked her in and spent the rest of the night butchering.

So that takes care of one of my goals for this season, first bowkill... check.
The next one is either, first buck, multiple deer in one season, or one of the kids getting one.

I really cant thank redcloud enough, Adam, youre the man, thanks for the help buddy, I cant wait to return the favor.

first picture from the field 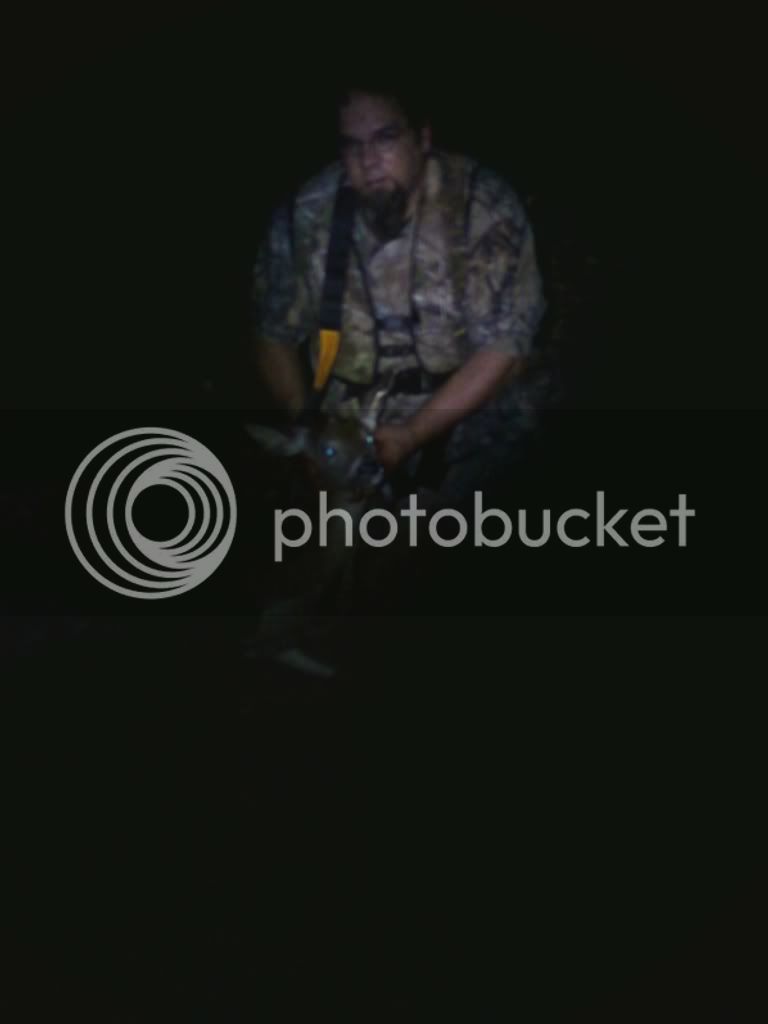 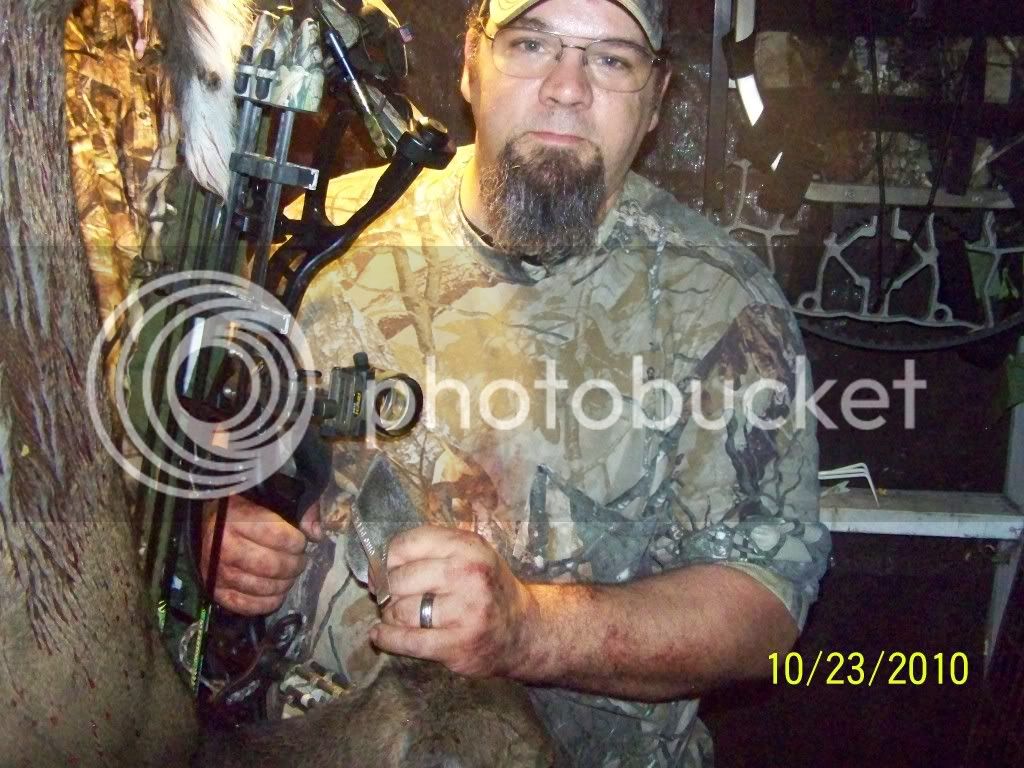 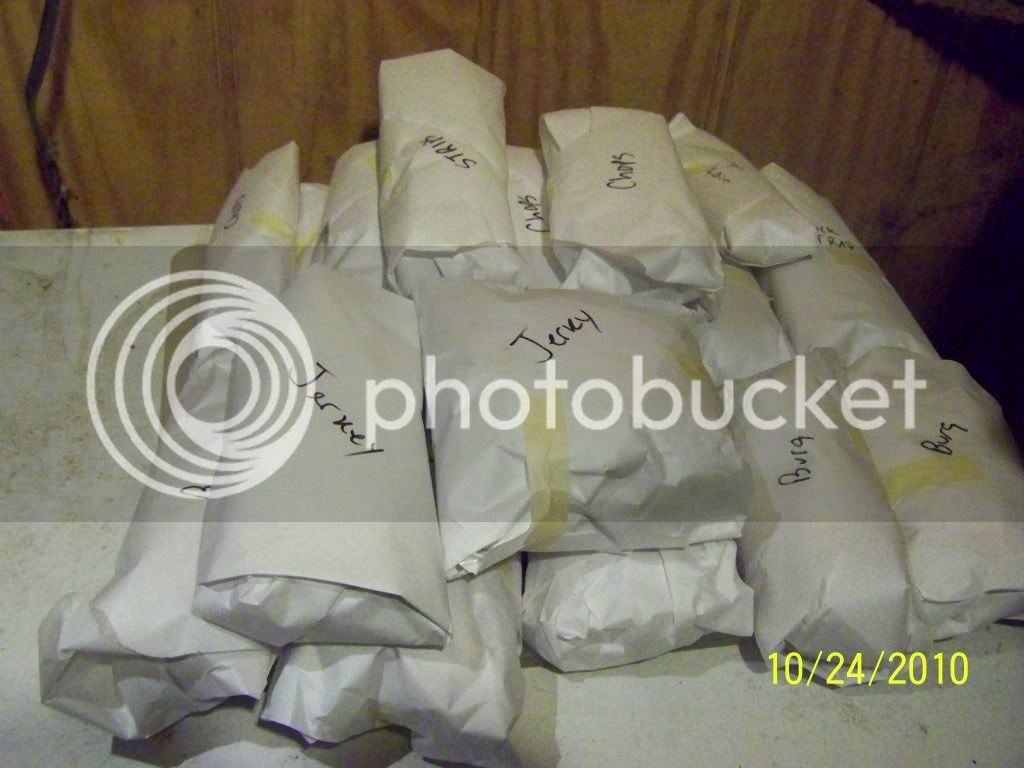 Great Job and Congrat's and your harvest. Wonder if that was the one Capt'n saw?

Congratulations on your first bow kill. Redcloud, your a heck of a dude! My hats off to you both!

Oh what a feeling

I gotta get one of those skin heads, myself, as my buck tag is filled. The weather is supposed to change (get cooler) around mid-week, so that will make things interesting.

Congrats again on one fine looking doe buddy. Like I told you last night " Getting that first one down is a huge relief and one nice confidence builder. " Now to key in on the bucks and see if you can keep it together when you see horns lol .
H

Way to hang in there and not let the noise of other things ruin your hunt... I hunted one time when a guy was target practicing with his hand gun he put about a hundred rounds through that thing that day, I wanted to give it up and call it quits he stopped the woods settled down and the deer started moving. Got a nice little basket rack eight that evening.. Congrats on the first of many bow kills.. And thanks for helping a brother out Red... Class act buddy...

That's friggen awesome man! I saw this earlier but didn't have time to post and congratulate you. Great read - I can see it in my mind because I know exactly where you are talking about!

I'd also be willing to bet that that's the same doe I drew on (and had the arrow slip off) and missed on on Thursday night. I thought the same thing - at first I thought she was a little on the small side but then realized if given the chance she was mature enough to pull back on! [Later that night when big momma and her fawn came through that was confirmed, they were lined up big, medium, small).

I'm so glad that you were able to capitalize on her since I couldn't! That is a nice doe and considering she was almost my first bow kill by a foot, I feel like I'm sharing in the experience with you - almost - it just makes me want to get out and make it happen myself!

Great to the get the first out of the way...they get easier after the first. Congrats man!!

Congratulations on your first doe,.way to get it out of the way

Way top go Dante and a big congrats on your first bow kill. Great to see another freezer being filled.

Awesome! With the headaches you guys were talking about between pot growers, ATV's, and the farmer with his random mowing and tractor running, I know I was pulling for you! I always cheer for the underdogs. I am one. Reminds me of last season for me and my first bow kill with all the extra nonsense going on in the woods I was hunting. Congratulations on your first bow kill! Great job!