Didn’t post too many stories from last year so I will try to be better this year.

Oregon’s season started on Saturday, August 24 so I headed out for a four day trip to a wilderness area. Started the six hour drive Friday morning and got there around 3 pm. The area is only 6 miles across so I hiked in 3. It took me until 6 pm to find the only spring left on the trail that hadn’t dried up. This state is known for wilderness areas being hammered by hunters, but then entire 3000+ acres I was hunting only had 4 other hunters that I knew of. Here is my chosen campsite: 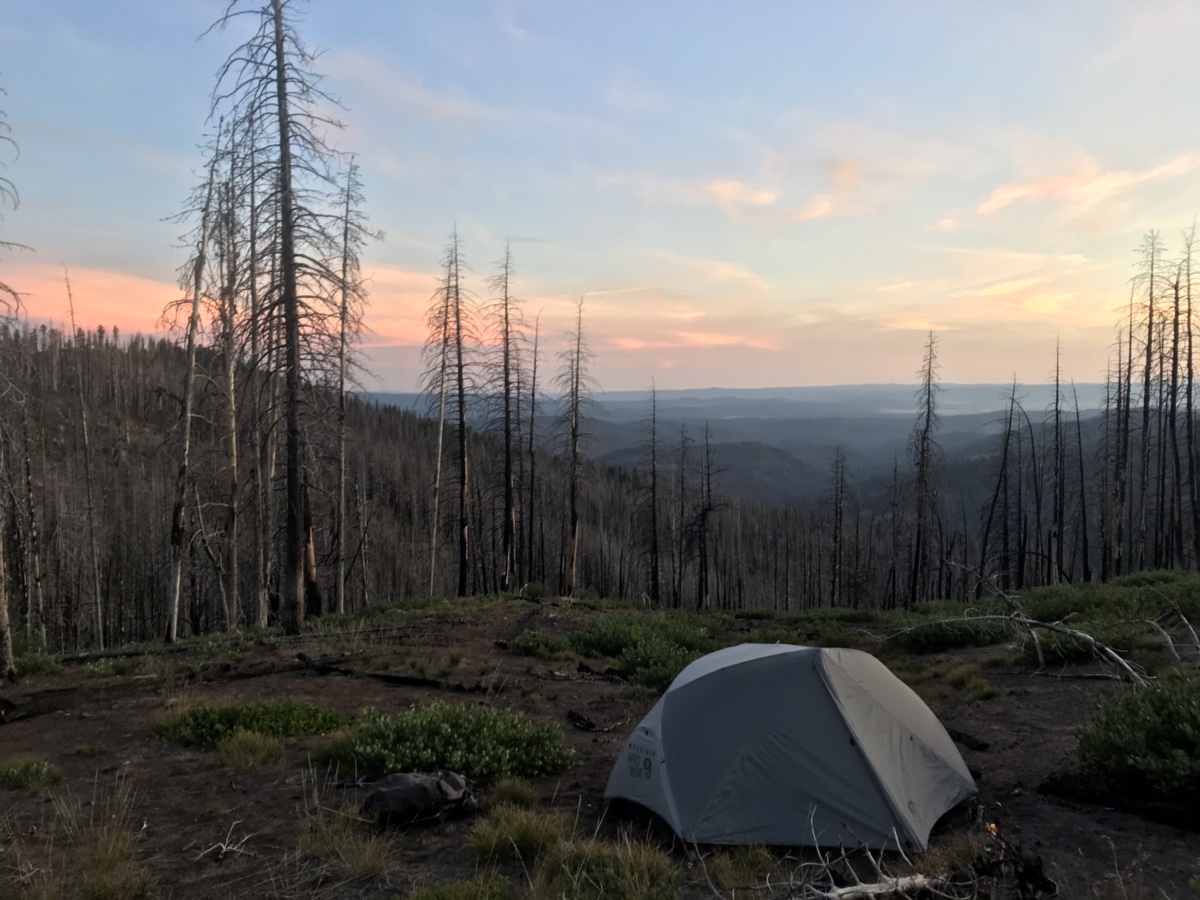 In preparation for the season I made 9 full dehydrated chicken stir fry meals, I didn’t buy anything pre-made for backpacking and even dehydrated scrambled eggs. Felt good to eat homemade things while out there.
Likes: Spencie, OHIOOutdoors2, Isaacorps and 12 others

Morning 1:
I was up in the highest basin, the plan was to wake up and glass with binoculars to locate deer in the early morning. If I saw anything with antlers I would stalk in and try to shoot it. Once the mid-day heat hit the plan was to head down into the canyon and find an elk wallow to sit on.

1 minute after I pulled my binoculars out I saw deer moving into a draw a half mile away. I couldn’t see exactly where they were headed so I grabbed my bow and practically ran over the three draws between us.

When I got over there, they were no longer in the same place. I spent 45 minutes easing slowly forward through a heavily burned hillside towards where I figured they were going. As I moved through where I’d seen them, the world exploded behind me. I turned around to see a group of bucks in full sprint through the burnt forest, a 20 foot dust cloud flying around them with the sun behind that. It was slightly depressing, but absolutely breathtaking. They had circled way up and around behind me out of sight in a small fold.

I hiked up to the highest cliff to look around and learn all of the folds for the next stalk, then headed back to camp.

Blue is my stalk, red is where they were, and green is how they got around me. 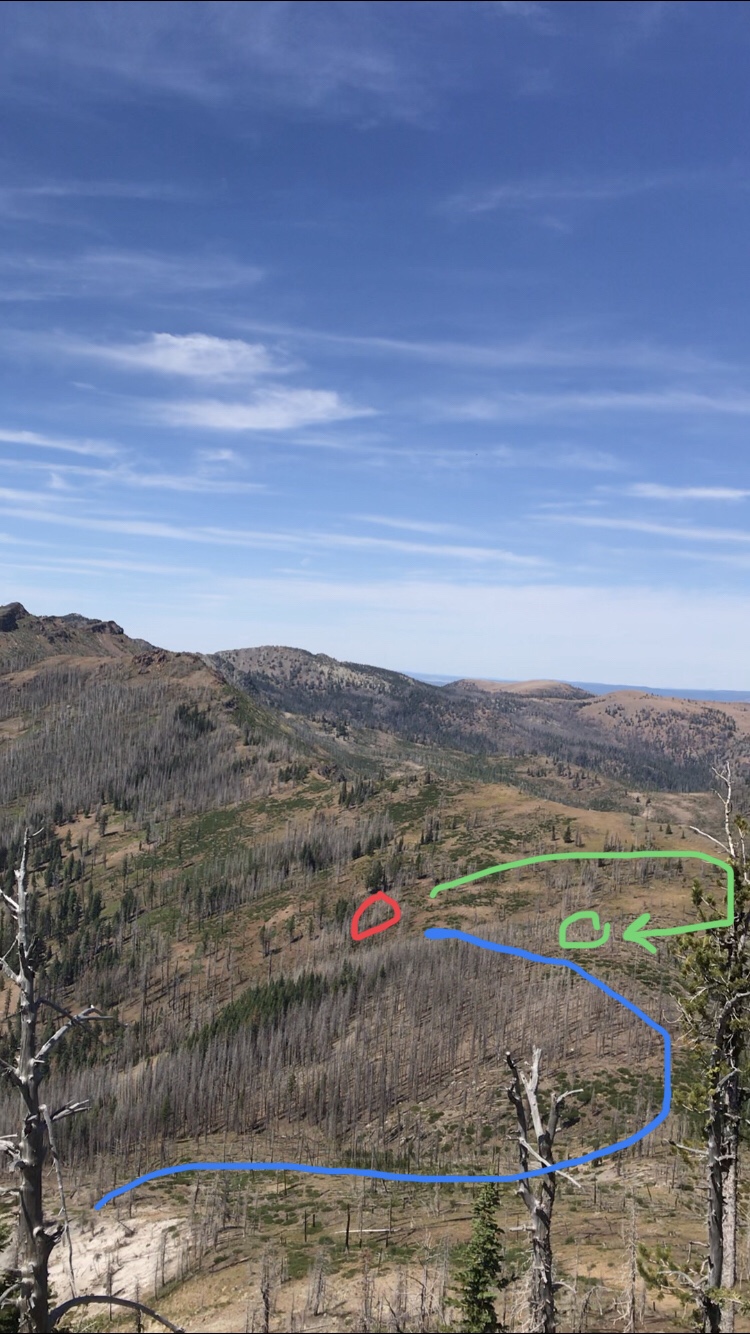 I think this is going to be a good thread !!!
Likes: giles and teenbowhunter

You running solo? Pretty cool way to start the opener! I'll be keeping tabs on this thread. Good luck and be safe out there!
Likes: teenbowhunter

Mid-day 1:
About 2.5 minutes into my nap I heart a rock thud and jumped up. A guy was walking up behind me. Having not seen anybody I was thinking where in the hell did this chump come from. He had hiked in to the very peak of the mountain and slept in a little crevice. He’d watched my stalk earlier from above through his spotting scope.

Me and Terry bullshitted for an hour and he decided that he wanted to move his camp down next to mine and hunt together. He’d killed 24 elk before so was fairly convinced he could call one in for me.

Two hours later we headed 1.5 miles down about 1200 feet of steep burns and creeks to a wallow that my buddy pinned on OnX back in 2018. On the way I found the coolest buck bed I’ve ever seen. 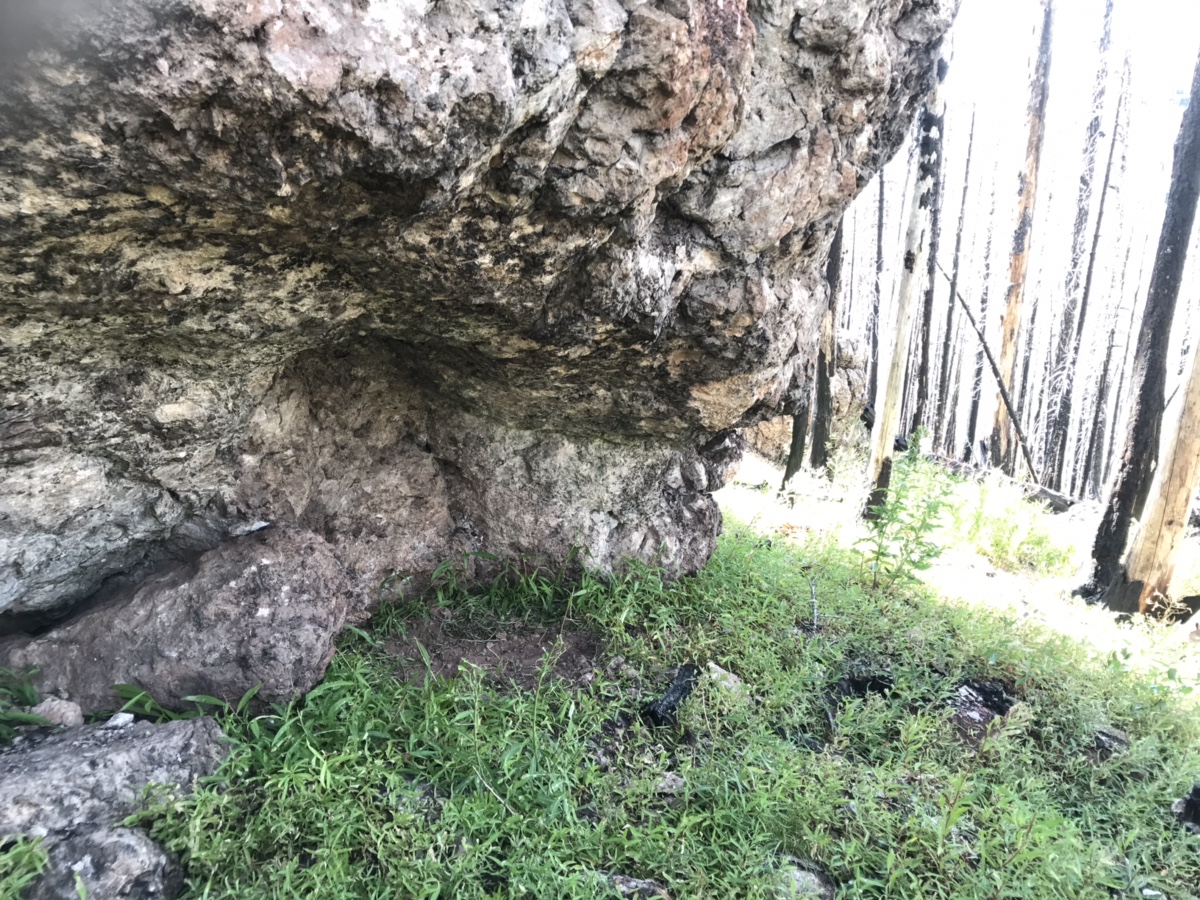 As we approached the wallow, the thermals kept jumping from uphill to downhill. I thought we were probably screwed. Just as we reached the pinned spot he saw a forkie mule deer on the other side of the alders around the wallow. I tossed him my elk diaphragm and told him to cow call as I slipped in for a shot. At that point I was 35 yards away but I couldn’t shoot through the branches. I deer stepped down and around towards him.

While I was moving towards him I heard a few branches break off to my left down the creek. Every time I looked I saw nothing. In my head I thought, “damnit I’m gonna shoot a forkie and then an elk is gonna pop out.”
I got to where I had a clear shot at the forkie and he’d vanished.

I heard another stick pop behind me and slowly turned to look once more. This time I saw the biggest f’ing bull elk I’ve ever seen in my life at 60 yards (350 class 6 point). He was feeding on the bushes in the creek facing directly towards me. I kicked my shoes off and slipped 30 yards closer in my socks, all the while watching his eyes. I don’t know how long it took, but somehow he didn’t bust. I sat and thirty yards going back and forth around a tree as he kept moving left to right and back to left behind a hanging pine bough.

Finally he popped out to the left with a bush covering his leg up to the shoulder. Without having his shoulder for reference, I drew back, put my 30 pin on his lungs and let the arrow fly.

He turned and looked straight at me. He didn’t move for five seconds.

He took four steps straight towards me. I nocked another arrow but wanted him to glance away so I could draw. I didn’t have a cow call or I would’ve called to confuse him so I could move.
Likes: Wildlife, Spencie, OHIOOutdoors2 and 6 others

You mother....if you smoked a bull and didn’t send me pics! I’ll be on the next flight to KickYourAssAstan!!!
Likes: OHIOOutdoors2, finelyshedded and Mike

He trotted off to 50 yards through the trees, I slowly side stepped to draw back. Just as I tried to draw he ran off to 90 yards on the other side of the creek. I should have taken it slow but I practically jogged to try and get another shot. I got to 50 yards but he was around so much brush I couldn’t make out where he was until he started running away.

We went back to regroup and look at blood and the arrow. I’d hit him with a 1.25” 100 grain kudu broadhead.

Where I hit him, there was blood sprayed out three feet in the direction of my arrow, leading to where the arrow lay. The arrow had no blood on it, and was covered in a light brown smear...

Pools of blood laid on both sides of where he stood, and lung blood lay around everywhere I’d watched him walk. 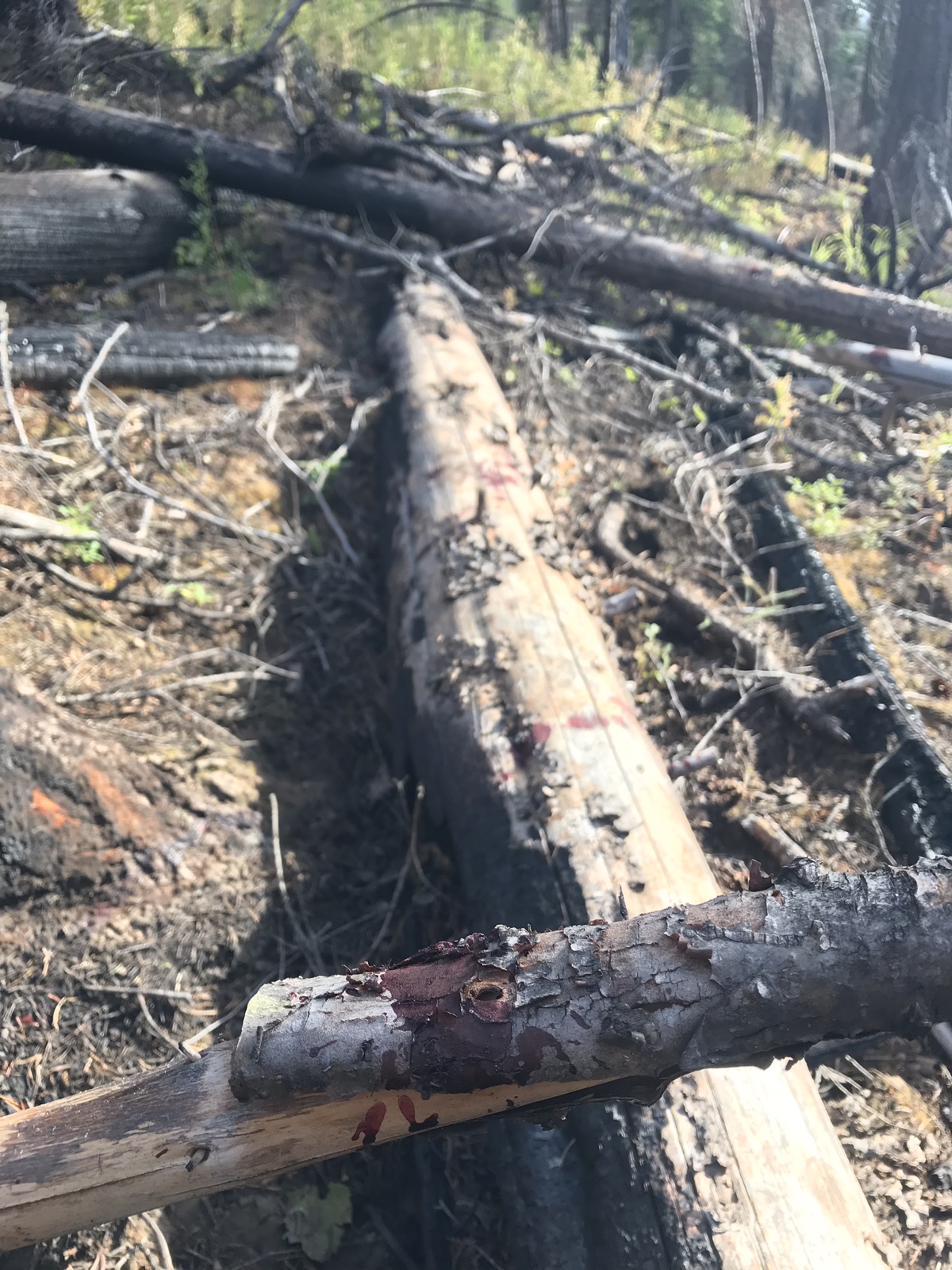 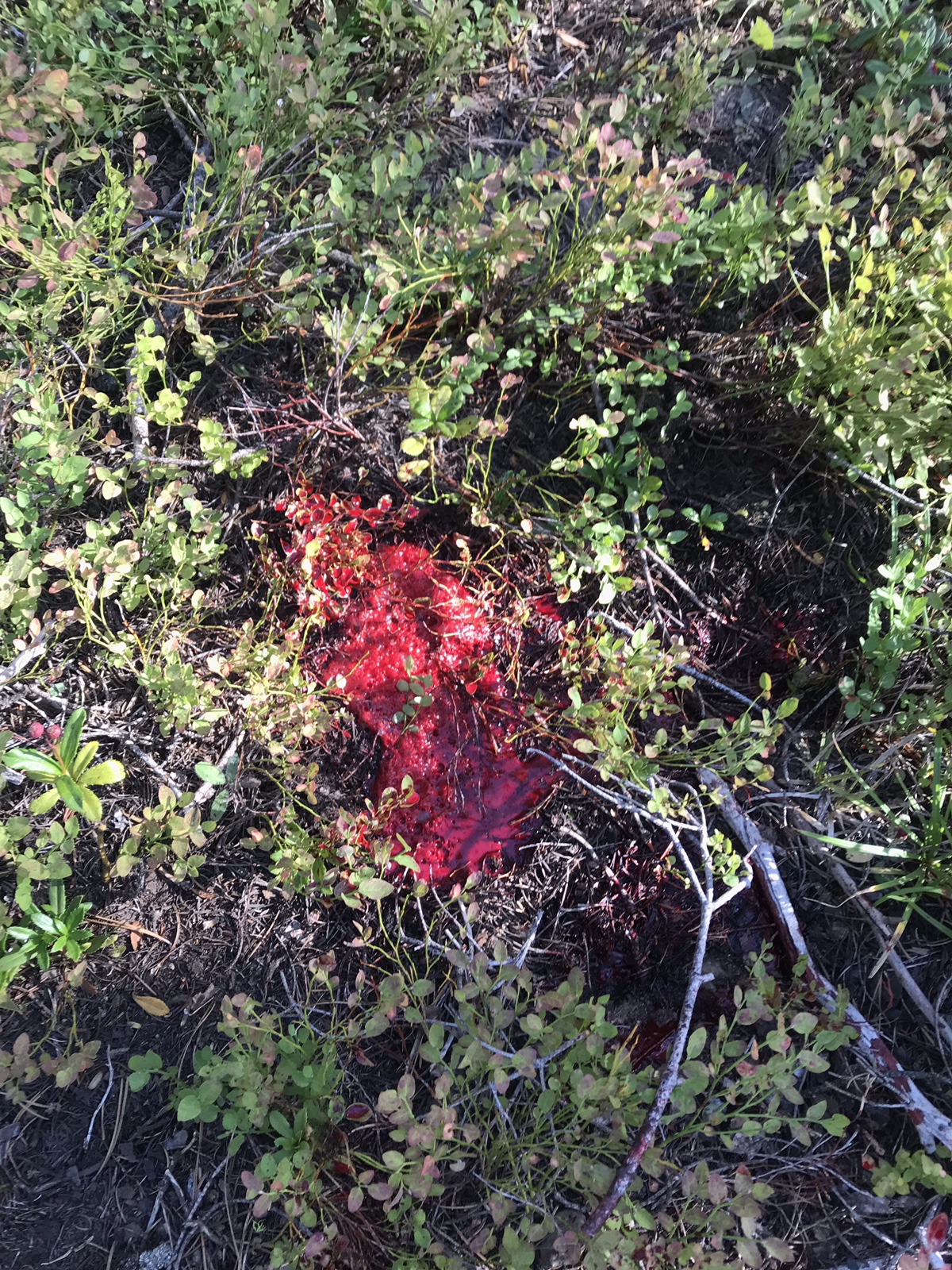 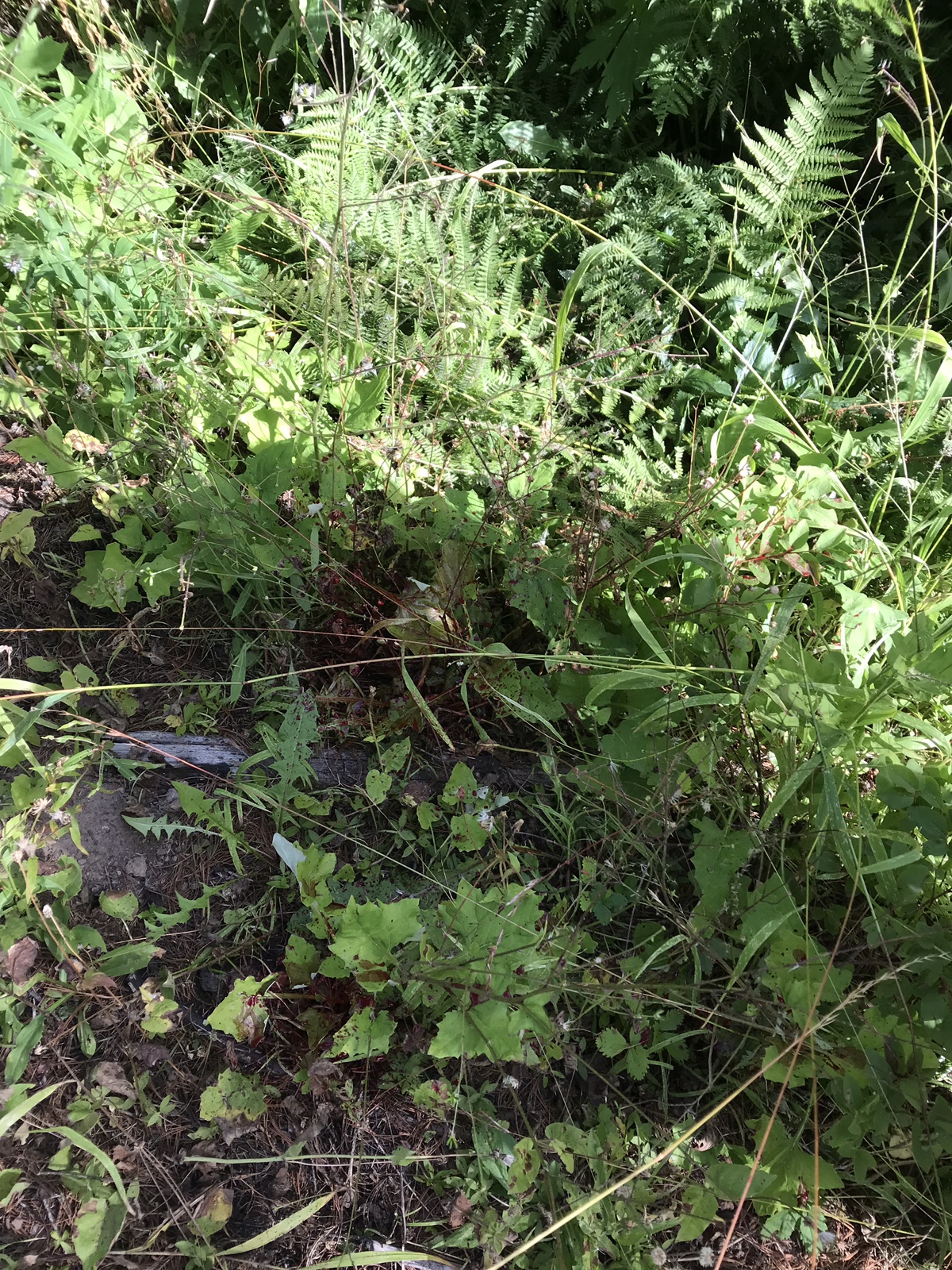 I knew I hadn’t tucked it close enough to the shoulder. My new bow never settles in as fast as my old one and isn’t as natural or confident. The second I had it on vitals I’d released instead of trying to tuck it forward.

The arrow was brown, but the blood was phenomenal. Terry thought the bull was probably already dead but I talked him into waiting 45 minutes.

We sat and rehydrated while we waited. We took off down the trail and it slowly faded, with blood still coming out both sides. As we approached a quarter mile, I began to get very doubtful. Blood was every five yards and getting smaller. 100 yards later he jumped a log and the blood got heavier.

Two hours after the shot, we’d tracked him 0.5 miles without him ever laying down, and the blood was still very wet and fresh. We couldn’t find any blood within 50 yards of the last drops.

Terry whispered “Holy shit I see him.” He was up and walking 200 yards out. It’s an eerie feeling seeing what you thought was a dead animal walking like nothing is wrong.
Likes: OHIOOutdoors2, Big_Holla and Creamer

I wanted to try and stalk in and get another arrow in him but Terry talked me out of it. The bull was in a comfortable bench surround by steep, nasty terrain. Hw figures he’s bed down and we’d find him in the morning. We backed out and hiked back to camp. On the way back we ran into a few does and a herd of bulls with one or two nice six points.

Day 2:
After a rough night of wind storms, I woke up to terry already up glassing for bucks. He wanted to hunt deer before we went and finished tracking. He found a very nice 4x4 after 30 minutes and decided to try and stalk from below him before the thermals switched. I won’t go into details, but he got to 65 yards and thankfully did not take the shot since his highest pin is 60.

We packed all of our stuff to the nearest uphill point from the bull and set out to find him. Hiking down we realized he was working his way uphill into an elk oasis. There were springs, meadows, shady bull beds, and giant rubs everywhere. 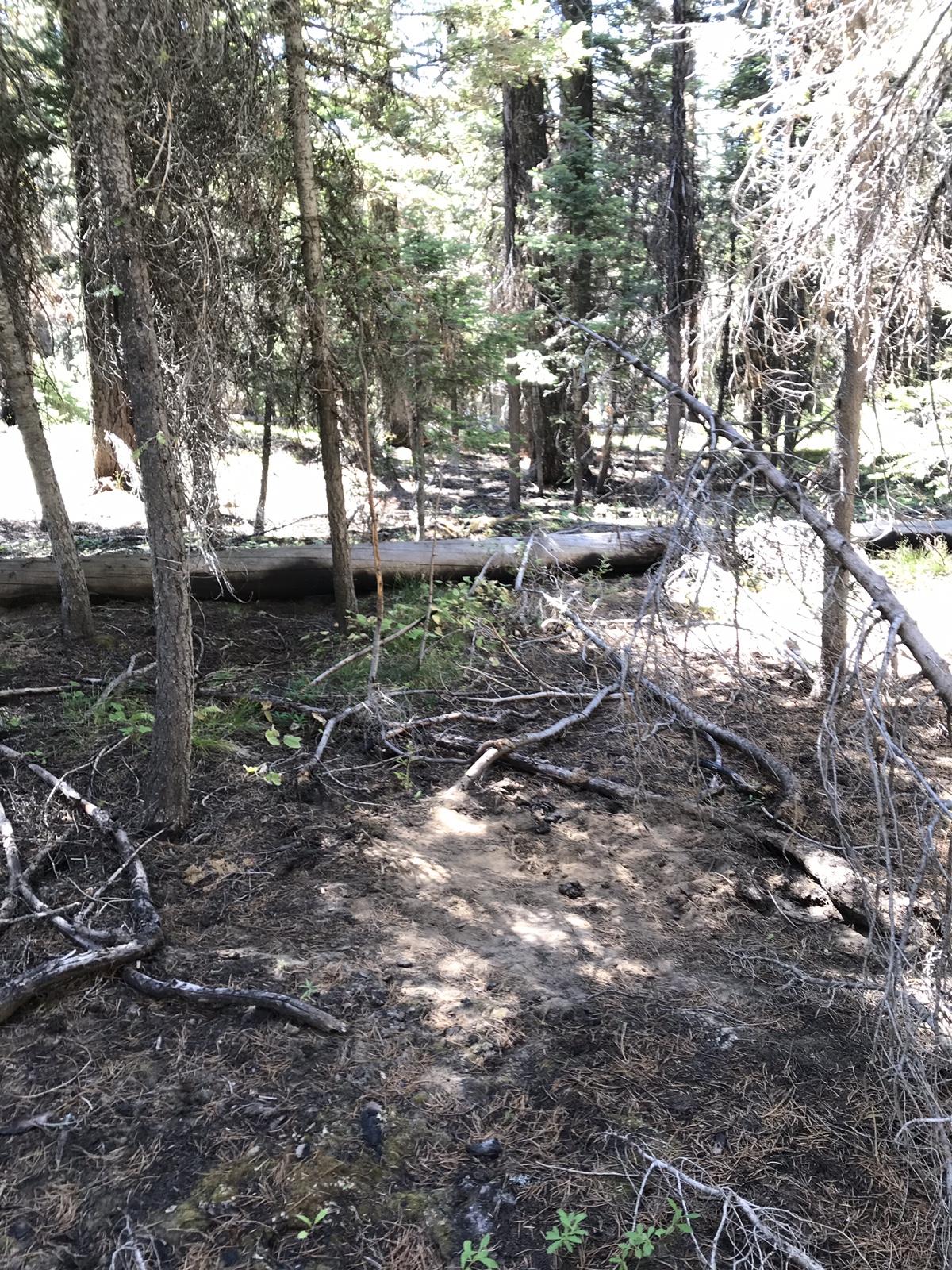 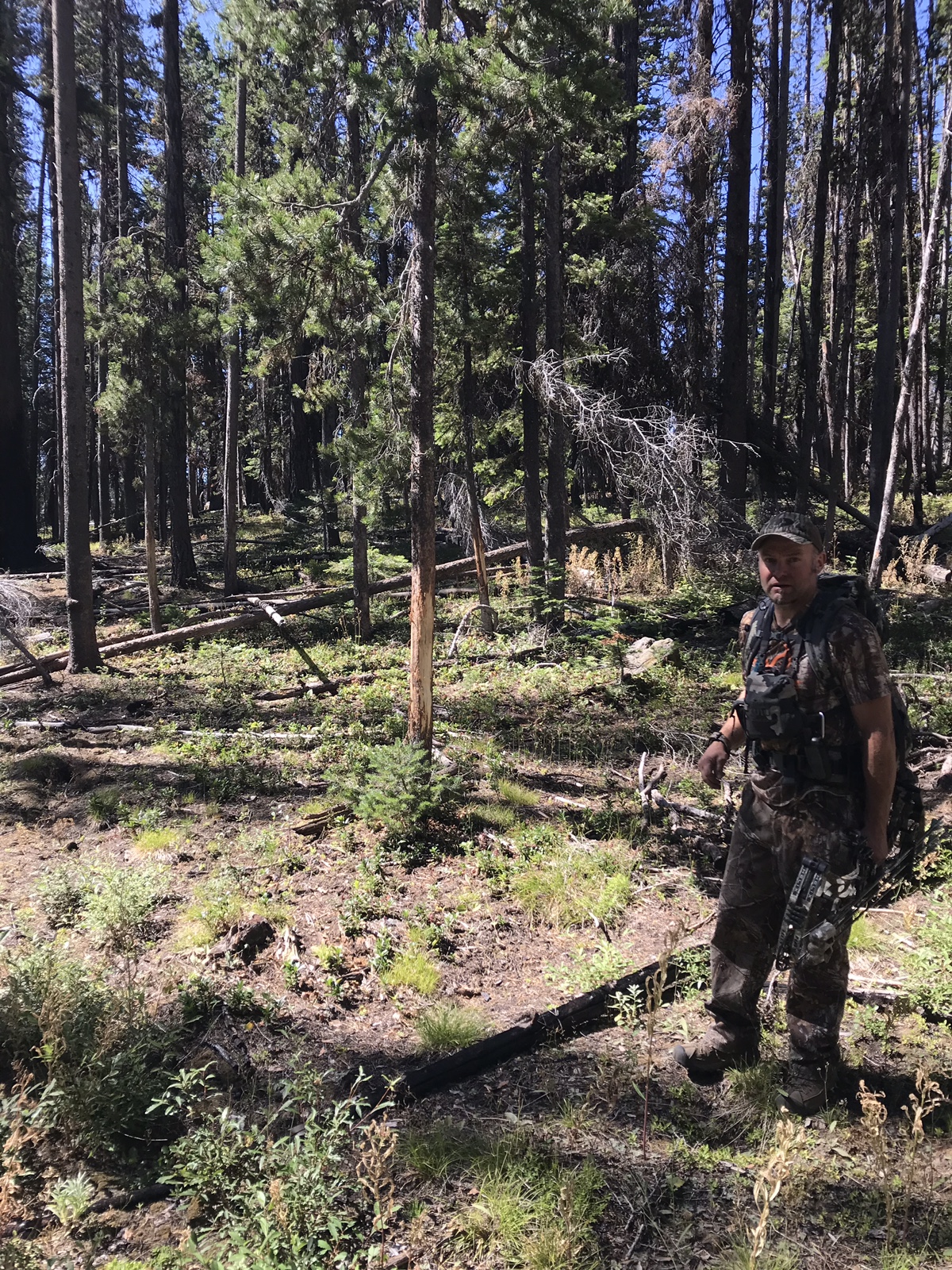 One of the reasons we’d left him was because we thought he was still bleeding. However, we hiked back to last blood and realized he’d stopped bleeding 30 yards later. We hiked up and down for hours looking for him, but a herd had gone through and covered his tracks. We had nothing to go off of and tried very hard to find him through dumb luck. For all I know, he may still be alive. I don’t know how he was still standing. I will forever regret not trying to stalk him for another shot, but it seemed like the right decision based on what we knew. I will forever regret not taking the time to tuck it closer to his shoulder, but sometimes taking too long results in a missed opportunity as well. 2-300 pounds of meat and a lot of inches of bone are out there somewhere, dead or alive, without my tag on it. This one stings, bad.
Likes: Wildlife, OHIOOutdoors2, Isaacorps and 3 others

Wow, too bad you didn't recover him. Sounds like a hell of a hunt though!
Likes: finelyshedded, Mike and teenbowhunter

That was a helluva ride right there.... Thanks for taking us along....
Likes: finelyshedded and teenbowhunter

"J" said:
That was a helluva ride right there.... Thanks for taking us along....
Click to expand...
More to come... might have to wait until I have time tomorrow/Friday though. Very busy working and preparing to head to New Mexico.
Likes: Big_Holla, brock ratcliff, OhioWhiteTails and 1 other person

teenbowhunter said:
More to come... might have to wait until I have time tomorrow/Friday though. Very busy working and preparing to head to New Mexico.
Click to expand...
Take your time, we’ll be here...
Likes: teenbowhunter

That was a great read
Likes: bowhunter1023, OhioWhiteTails, finelyshedded and 1 other person