I shot him on Sunday morning, which was Halloween.....never killed a deer on that day before.

I woke up at 3:45 in the morning wide awake, and unable to get back to sleep. Something was telling me that today something was about to happen. I went outside and the wind was blowing steady from the north at 4 am. Checked the weather forecast and it said the wind would die down to nothing by 6am. Sure enough when I got to the hunting grounds, the wind had laid down and it was very quiet going to the stand. After climbing into the stand and pulling up the bow, I could hear deer moving in the woods a ways off as the sky began to lighten up. Shortly after daylight I hear footsteps to my left. I look over and there is a nice doe walking out of the woods and heading out into a crp field. She never acted nervous or looked behind, so I had no reason to believe anything was behind her. About 10 minutes later, I heard brush cracking to the left of me, the same place the doe came from. After scanning the edge of the woods I see the ass of a deer walking away from me at about 50 yards. Soon, the deer turned and went into the crp field the same direction the previous doe had went. As soon as it cleared the trees and entered the weeds, I could see it was a good buck. I pulled up the binos and could tell it was at least a 10 pt. As the buck continued walking away from me, I pulled out the grunt tube and gave him every call in the book. All he would do was look in my direction, and then continue on his path away from me. I tried doe bleats, buck grunts, everything I could think of, then I thought....get the rattle bag and make some noise and really get his attention. I did that and he looked my way, then I gave him a snort wheeze.......boy did that piss him off!!! He immediately found a good sized tree and proceded to tear it up, and at the same time he pawed and stomped the ground....... I thought he might come to me at this point, but eventually he continued on his route away from me. I watched him make a 1/4 mile half circle onto the adjoining property and he even walked right in front of someone's ground blind! Luckily for me nobody was in it.... He continued past the blind which was about 300 yards from my position and eventually he circled back and was coming in my direction. He narrowed the gap to less than 100 yards and I could tell that he was going to come within range. I stood up and got ready to do battle, as this buck was on a mission. He got to within 30 yards of me and he turned 90 degrees to his left and cut down into the woods and got on a trail in the bottom of a low gully in the woods. I drew the bow when he went behind some brushy trees and held at full draw waiting for him to come out....the problem now was the fact he was directly downwind of me and putting his nose in the air, trying to wind something. I held at full draw for a good minute before he took a couple more steps and stopped again. When he stopped this time there was a branch covering his chest cavity, so I leaned to the right and found an opening in a forked off poison ivy vine, lined up the pin on his chest and let the arrow go.....................CRACK!!!! was what I heard, it sounded like the arrow hit a tree and the buck just jumped and ran about 40 yards and stopped and looked around as if nothing had happened...All the while I'm thinking to myself "how in the hell did you miss him, he was only 20 yards!" The buck stood still for about 15 seconds and as I'm watching him his back legs started to get wobbly and he tipped over on his left side! I took a deep breath as the adrenaline kicked in from the realization that I did indeed make a good shot. I've came to realize that these new bows shoot so fast that it's tough to see where the arrow goes, you just need to trust your shooting form and make it happen.

When I looked at the wound, the arrow passed cleanly through both lungs and exited into the ground, and the crack I heard was a rib breaking as the arrow entered the deers right side.

I had him officially green scored yesterday at the taxidermist, he grossed 148 inches and netted 145 inches. He field dressed 196 lbs also. 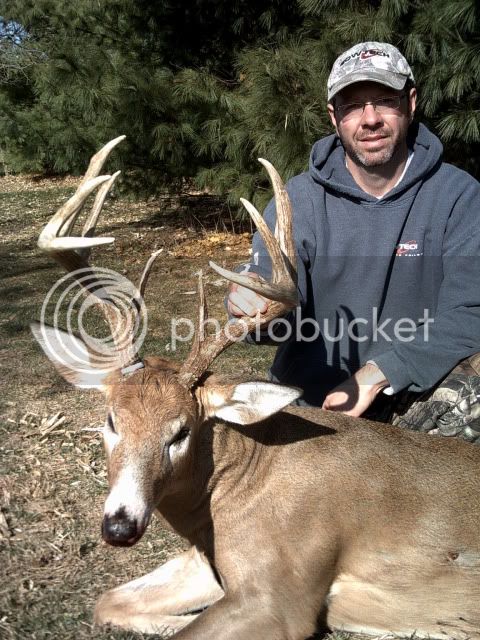 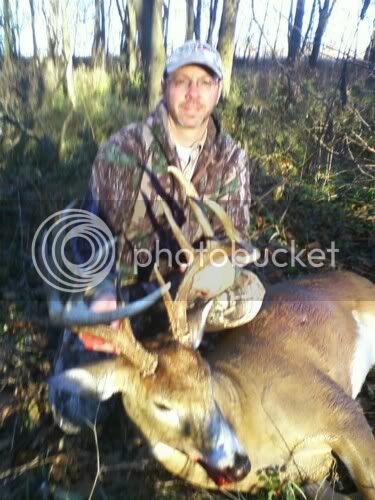 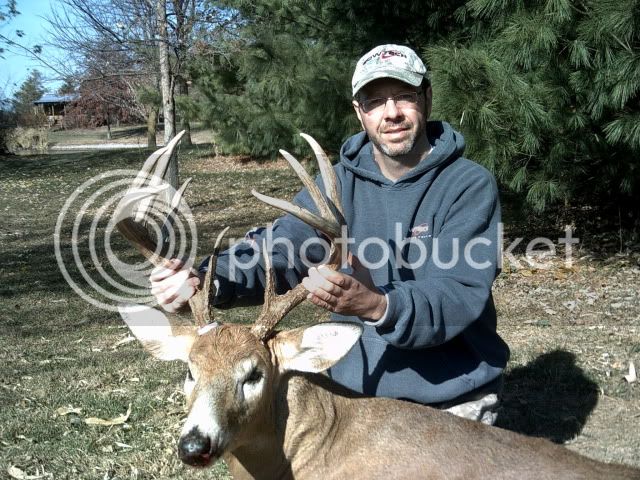 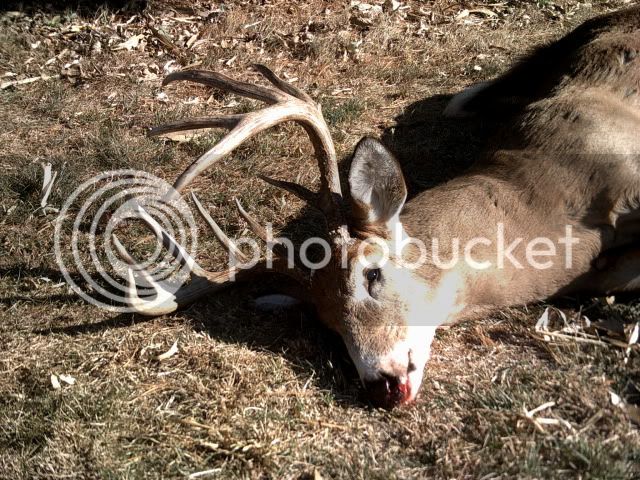 Great write up Chad! And a hell of a buck. Love that high and tight look!!! You are the man! :smiley_carnaval:

Way to go Gern. That is an awesome buck. Can't beat only having 3" of deduction either.

WOW! Excellent story of a great hunt. Glad to see it going your way man...great stuff.:smile::smile:

you are the man gern, you get it done year after year

Nice buck, congrats on that bruiser... Great story and a great ending...

Congradulations, Gern186, you are very deserving of such a fine trophy. :smiley_blink:

As I said in the other thread, congrats on a great buck! Awesome story to go with it.

Nice buck Chad! Glad you were able to get onto another nice buck after your other misfortunes. Congratulations!