I just had a very great conversation with my buddy. We hunted together a lot in high school but have not done a whole lot lately. His family farms around 6000 acres and after 2 years of managing everything, he's been able to switch his class schedule to taking fall quarter at OSU off. Since crops are in already and they are just working ground, he has been bitten by the buck bug pretty good and getting serious about!

He called me this morning about taking down tree stands. He's clearing a piece for himself and his cousin (in addition to the block of woods that only he hunts) and wanted to make sure that none of the tree stands were mine...and asked if I needed another ladder stand or two! The main piece of theirs that I hunt is a good chunk of woods, split in half. Starting next year, 2 guys will have sole permission of the other side of the property - my neighbors that's a great taxidermist and his uncle. On the other side of the woods, it will be sole permission to my buddy, our other best friend, and me :smiley_crazy: That might sound like a lot, but it's a good piece of woods...We've overrun by amish and people that think they can just hunt where ever, but he is serious about cracking down and posting the woods up. Last time I walked the property there were at least 7 stands in the woods (many have been there for years) and I would say that there are probably 5 guys that hunt it regularly plus getting driving 2-3 times during gun week.

I am sure that in the next few years we will have to do a TON of border patrol (but we're good friends with the GW)...but I'm also sure that there will be a scheme between the four of us in the block of woods and starting some quality deer management. I don't see him hunting there a lot, and he rarely shoots more deer than a buck, so potentially I could be sharing the woods with just 4 other guys, and limited at that. The taxidermist is very serious about his hunting, to the point of restricting close family members on what they can shoot. I'm sure that it will be a battle, but maybe in 5 years or so we can get into a position of some really quality woods.

[The property is also already awesome for turkey hunting and if this happens, I could easily see guiding some turkey hunts on the property]

We also talked about this season of bowhunting. I mentioned the smoker to him and I think he's going to get one and try it out (or try mine out first and then get one). He also wants to do some filming for the first time and is planning on hanging some stands next to each other in the next three weeks before I get home for Thanksgiving. It has been a rough couple of months since I lost my hunting mentor, but with you guys, Adam's generosity, and now this promising conversation....things are looking GREAT!

This is the property: 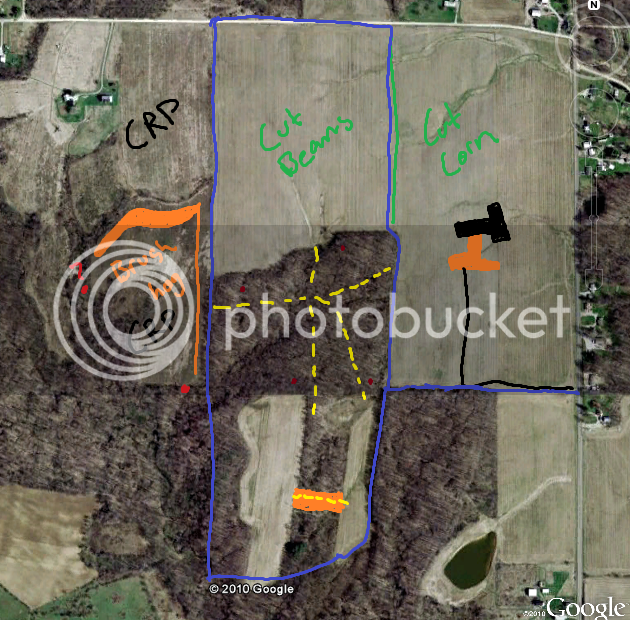 hmmmmmmmmmmmmmmmm i wonder where that property is.........lol , ill sell maps for 5000 dollars a piece for anyone interested, o yeah i used to coon hunt that area , alot of potentail there for monster bucks
R

I know ugly that is why I am excited that he is getting serious about locking us down and just us hunting it!

Congrats Steve. Looks Like a great place to hunt. Now all you have to figure out is how you are going to hunt it and be in school at the same time.
R

That is the good thing Hoyt. You can see their grain bins from that field and the other guy that will be hunting the property lives about 2 miles away, so it will be kept track of. So although I won't be able to hunt it or keep my eye on it, good people will. If there is a white cavilaer in the field I will tell them to run it over!

I have thought more and more about this all day and there is a lot that could be done to the property if we lock it down. There's a bunch of junk in that tile crick that could be cleaned out, we could put some food plots in with the 8410T, trimming, the one stand that is in there is terrible for bow, naturally I'm going to move that now... mmm
U

i might have to pull out the friend card and beg to hunt it sometime....lol , you guys need any help with anything when im up there , ill be more then happy to help give ya some tips on making man made funnels

Looks awesome to me! Goodluck and congrats!