Thursday evening, I headed out to the farm where Greg and I are chasing Hook Jr. and Crazy Rack to change batteries on the cams. When I got home and had a chance to check the pics, I was amazed at how Crazy Rack had added to his rack in just 10 days, especially this late in the summer. I spent about an hour analyzing all the pictures of CR and Hook Jr. from the past few weeks to see what the pattern may be. After realizing that this stand is going to be smoking hot most of the season, I got to thinking about how I would feel about shooting CR versus letting him walk. With the video that Greg has of him, and now with my nearly 500 pictures of him, the history we are building with him becomes a game changer in my opinion. I was hoping that Greg would be comfortable with the idea of taking CR given the chance this year even though we initially decided to let him go. After a good hour long discussion over a few cold ones Saturday night, we decided to take CR if we have the chance this year.

I realize a lot can change between now and the opener, but I have a gut feeling that I will have a chance to kill this deer opening weekend. Right now, he is on a daily pattern through this area and we both think he is bedding just to the north of the stand. I’ll keep the corn there until after opening weekend as he seems to have a serious love of golden acorns! This deer violates my “Wall Rule”. However, he would make a great mount and at 3.5, he’s mature by our area standards. No one else is going to let him go, so Greg and I might as well make it count if given the chance. I’ve learned the hard way over the past few years that you never know what will happen to these deer and if I get too damn picky, I may die with a wall full of nothing and a book full of great pictures.

So my goal is now to kill CR on opening weekend. I plan to hunt from 2PM to dark both nights and I’ll leave work early the first week if I have to do so in order to get back in there. I planned on pulling this camera, but I’ll leave it there to do its job so I know what to expect as we near opening weekend. The next scheduled check will be next Monday since it’ll be my birthday and a round of fresh pics always makes a great gift! After that, I’ll let it go until a couple of days before the season. Wish me luck fellas. I’ve never hunted a deer that I thought I had a chance to kill opening weekend and for whatever reason, I have a feeling this could be the deer and the year!

(I apoligize for the crappy pics. I left my cards at home, so I uploaded the screen shots from my iPhone.) 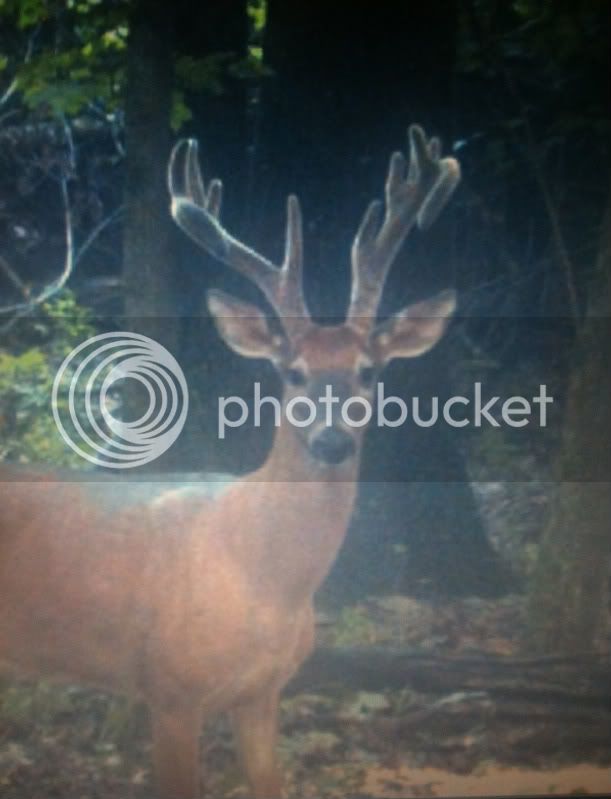 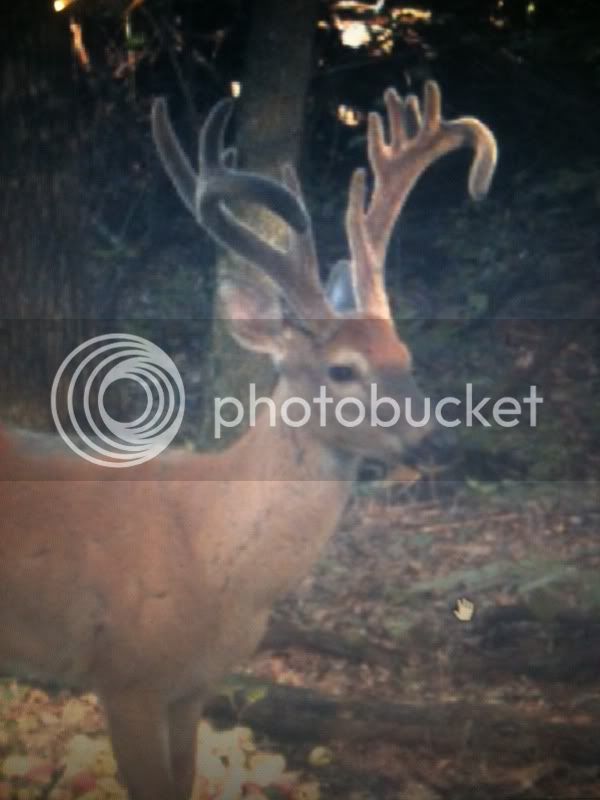 Looks like he is crossbred with an antelope. Good luck, but if you kill him the first weekend what fun would that be? I guess you can always fill your doe tags and help your wife out. Personally, I wouldn't shoot that buck on the first week of the season......maybe later on in mid november.... but from what you have said about this new property you are hunting I feel there is a good chance of a much better buck presenting himself come the 3rd week of October thru mid November. If you are happy with him, take him down when you get a chance, but don't rush things and try to be patient.....there may be something better in your future.

I'd say you outta have a pretty good chance at getting a shot off on either of those guys if you are in that stand the first week. I'm still not sure how I'm gonna hunt opening week. I'm gonna spend the weekend with Kate and let her hunt where she wants, but Monday-Thursday I'm gonna be out observing and hoping to stick a doe early. I'd like to break the Elite in before I go back to work on October 1st.

Gern186 said:
Looks like he is crossbred with an antelope. Good luck, but if you kill him the first weekend what fun would that be? I guess you can always fill your doe tags and help your wife out. Personally, I wouldn't shoot that buck on the first week of the season......maybe later on in mid november.... but from what you have said about this new property you are hunting I feel there is a good chance of a much better buck presenting himself come the 3rd week of October thru mid November. If you are happy with him, take him down when you get a chance, but don't rush things and try to be patient.....there may be something better in your future.
Click to expand...


I was torn over the decision at first, but I think I could live with it now. It would allow me to spend most of the season helping Tracie, my cousin, and my buddies get on deer which I am coming to enjoy as much as hunting for myself. I could also focus on waterfowling for a season, which would be awesome! And the idea of taking the pressure off the first weekend sure seems nice. But then again, I know there is the potential to kill a B&C caliber buck out there and I am actually keeping tabs on one that size in another area. However, those are both long shots at this point. It's the old "a bird in the hand" scenario. It's also a "hindsight is 20/20" scenario too.

I still have time to think it over, but I have a feeling there will be tension on the string opening weekend if he strolls through...

I hope it happens for you jesse, ger er done if thats whats going to make you happy. I personally would smoke that guy in a second. You dont get to see many deer that look like that. Hes a wall hanger IMO any day.

Sounds like a plan. That buck has a pretty cool looking rack. Good luck.

That deer is awesome. I'd crap my pants if I had a shot at it. The character in a rack like that is more fun than a really clean typical rack for me. Good luck, Jesse. I'd offer to film for you, but as I said, I'd crap my pants so you wouldn't want me in a stand over you.

Good luck in what ever you choose to do....he is a neat looking buck. I have a feeling you will do well this year!

I'm in the same boat as Chad on this one. For me personally, it would be tough to take a shot at that deer on opening weekend. IMO that's just too early to make the final call on a buck of that caliber. Come late october / early november, there could be some real bruisers coming through that you're totally unaware of right now.

BUT... that being said, I can tell by what you said and by what I know about you that Jesse is not always about Jesse... you are a very unselfish individual and if taking a shot at this buck means opportunities to help others and more thoroughly enjoying your season, then by all means, let one fly brother. CR is definitely a deer to be proud of... I mean, they're all deer to be proud of right? So do what makes you happy. I've got a feeling that if you whack CR on opening weekend, everyone around you will have a great season as well. Best of luck on opening weekend dude. Even if you're not 100% sure of your decision right now, you'll make up your mind when the opportunity presents itself that's for sure.

Why not let the wife bust him Jesse. It would be a great deer for her and dead is dead. But you still got your tag.

Jackalope said:
Why not let the wife bust him Jesse. It would be a great deer for her and dead is dead. But you still got your tag.
Click to expand...


I might be unselfish, but that doesn't mean I don't keep some things to myself. If it weren't for Greg, I wouldn't be hunting here. So I see no reason to invite someone else, even my wife. Tracie and I agreed early on that she wouldn't be "invited" to hunt here. We have plenty of quality ground with great potential for her to hunt; and the stand sets are much more suitable for her on our other farms. This farm is where I'll do my serious, hardcore hunting and I'm in no need of tag-a-long when I head out there. She's cool with it and understands my reasoning behind not taking her hunting on this farm.
Last edited: Aug 30, 2010

Jackalope said:
Why not let the wife bust him Jesse. It would be a great deer for her and dead is dead. But you still got your tag.
Click to expand...

If he's on your hit list I'd take him out early before he breaks off one of his hooks. Good character buck.

Best of luck to you which ever direction you decide to go. I know you are due for a good year.

i say smoke him... if it were me, i wouldnt think twice.. last year i screwed up and let a buck pushing 140 walk on opening day because it was opening day and i thought i could do better... i made the same mistake a day or two before shotgun season on a buck that would go prob in the mid 130's with a sweet kicker..because i thought id get a big one in shotgun season. not to mention he was sniffing my decoy at 5yds.. i ended up shooting a 120 class buck on a drive out of frustration and didnt really know he was that small. if i get a crack at a good one opening day i will pull the trigger... besides, then you can still get out and help your buddies and film.. and sleep in on the weekends.. that doesnt sound to bad to me... good luck whatever u decide.

I agree, if he's on your hit list and a solid 3.5 yr. old with that much character and you have an opp. to take him, you should do it. You never know what the future holds, good or bad. You can be laid up in the hospital or other crisis's later on in the season. Just sayin'. I can't get over how his beams are formed. High and tight with a downward inside curl.

I can't wait to see that Joker in Jesse's hands with a can of beer :smiley_adfundum: and a tape measure.

You know, it's really a shame the Crazy has that injury. IMO, he had some real potential if he was in better health. Don't get me wrong, I think he would be a great deer to take for several obvious reasons, but just imagine what he would look like this year if he wasn't all gimped up. As bad as his front leg is, I don't see him getting any better, and I don't see his rack getting much larger.
You must log in or register to reply here.
Share:
Facebook Twitter Reddit Pinterest Tumblr WhatsApp Email Share Link