And another rain out. Better to cancel before everyone leaves the house. Glad they didn't wait until we all drove to the track.
Reactions: Big_Holla

It is race day again. Taking the #17 truck. One truck. One driver. Less scatter brain. More focus. Truck was fast last race. Need to work on the driver. Goals: be safe, have fun, steadily improve. Longshot goals: kinda be nice to make the podium on my birthday.

Hot laps. Fourth fastest lap time. Be nice if I ran all three of them. Thought we were done. Saw the checkered flag. Backed off. Oh well. I'll take 4th quick.

Heat race line up determined by pill draw. I drew the worst number possible. I started last. 8 laps. Didn't matter. I moved thru the field. Truck was bad fast. They had a caution. I was about mid pack. On lap 4 or 5. We cannot pass until we go past the Flagstand and cone. On the restart I had a guy in front of me with a truck that died. We were right by flag stand but not yet beyond it. He threw his arm up to let those behind him know he was dead. I moved around and caught back up to the pack. Worked into 2nd place. Was reeling in the leader as I ran out of laps. Official announced a 2 place penalty for passing before flag stand. Official place was 4th of 7. Horse shit.

Started feature in row 4. Track completely different. Was heavy early and now was a dry slick. I looked like Bambi on Ice. Most guys did. Moved up to third, slipped to 4th, then had a guy slide up the track on me. His rear bumper hooked my front bumper. Sent me head first into the wall. It was a light hit. I continued the race. Gauges stayed good. Truck handled okay. Of course, I got to start on the tail again. Worked my way back to 5th in the last 7 laps. Was in striking distance of 3rd and 4th. We actually crossed the finish line together. One was high and the other was low. I tried to slide in between them but they were all over the place sloppy loose. I backed off. No need to crash three trucks at the checkers. Finished in 5th.

Heat race felt dang good. I knew I had a shot at running for the win after the heat race. Track conditions changed. I didn't change enough to match them. Truck was fast. Officials delivered some bad luck. Truck pushing me into wall was bad luck. I'll blame the driver for set up mistakes and needing improvement on driving.

Bumper and bumper bracket/bracing did their job. Crumpled but kept suspension damage free and frame looked good. Got one side done. Need to do the other side later. Tough getting it true.close enough.. 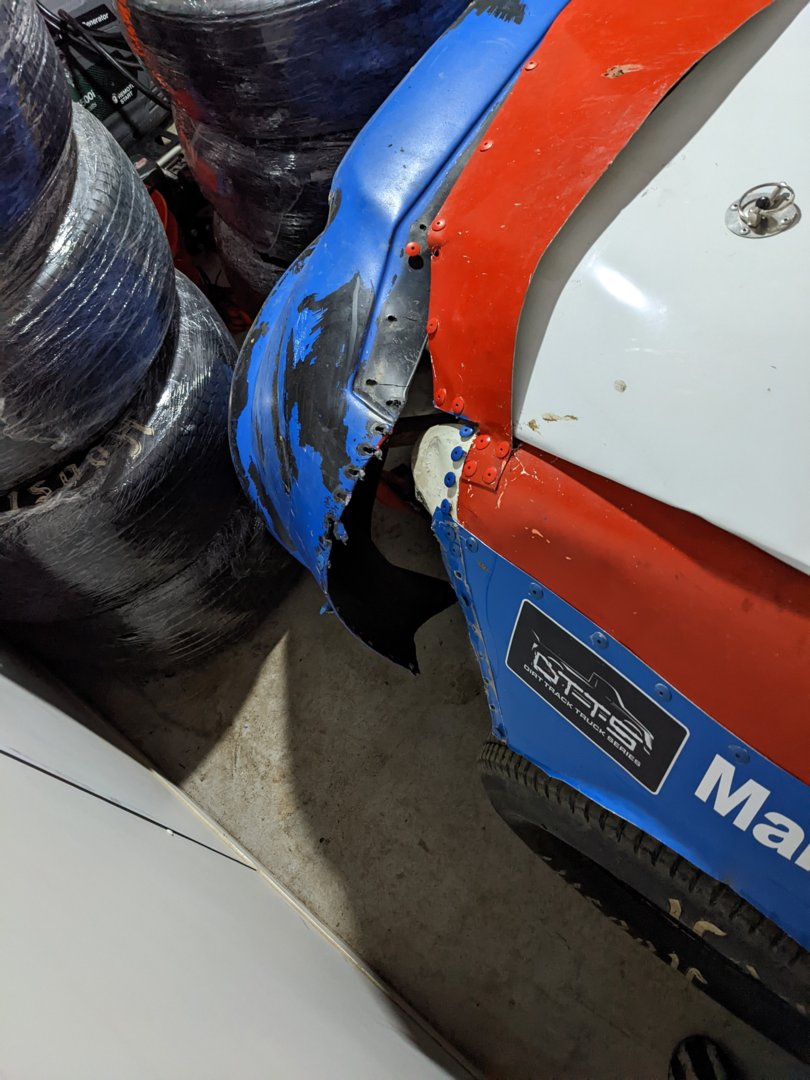 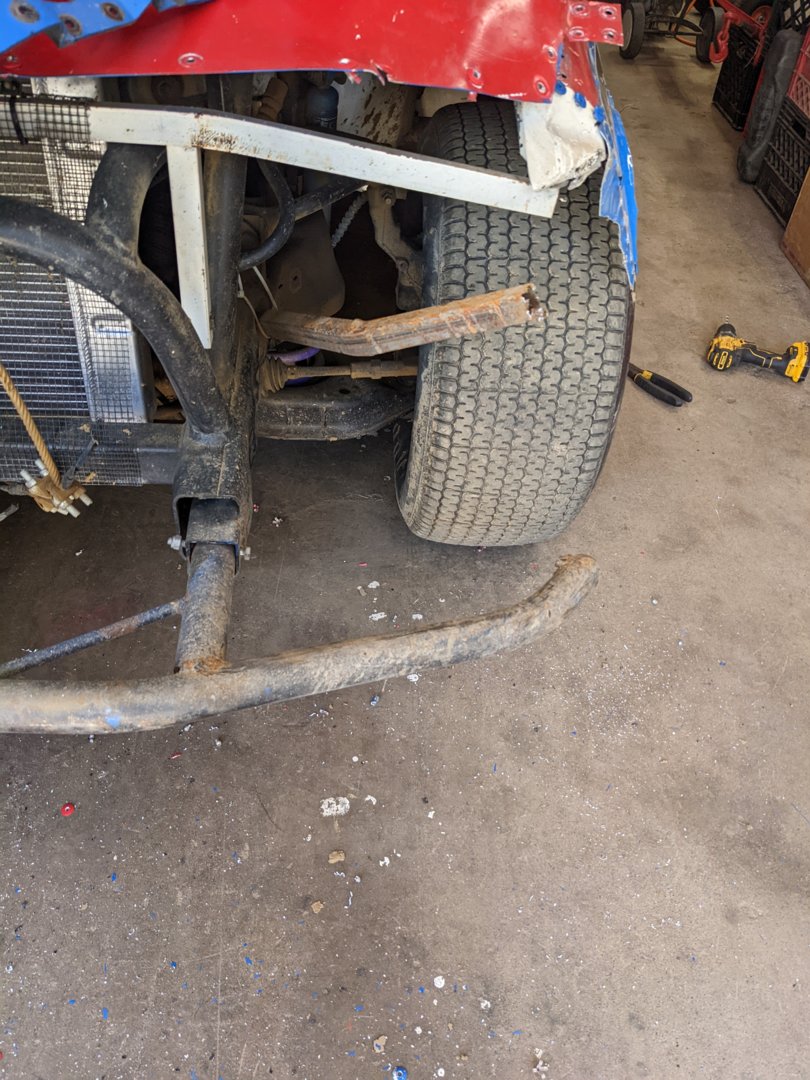 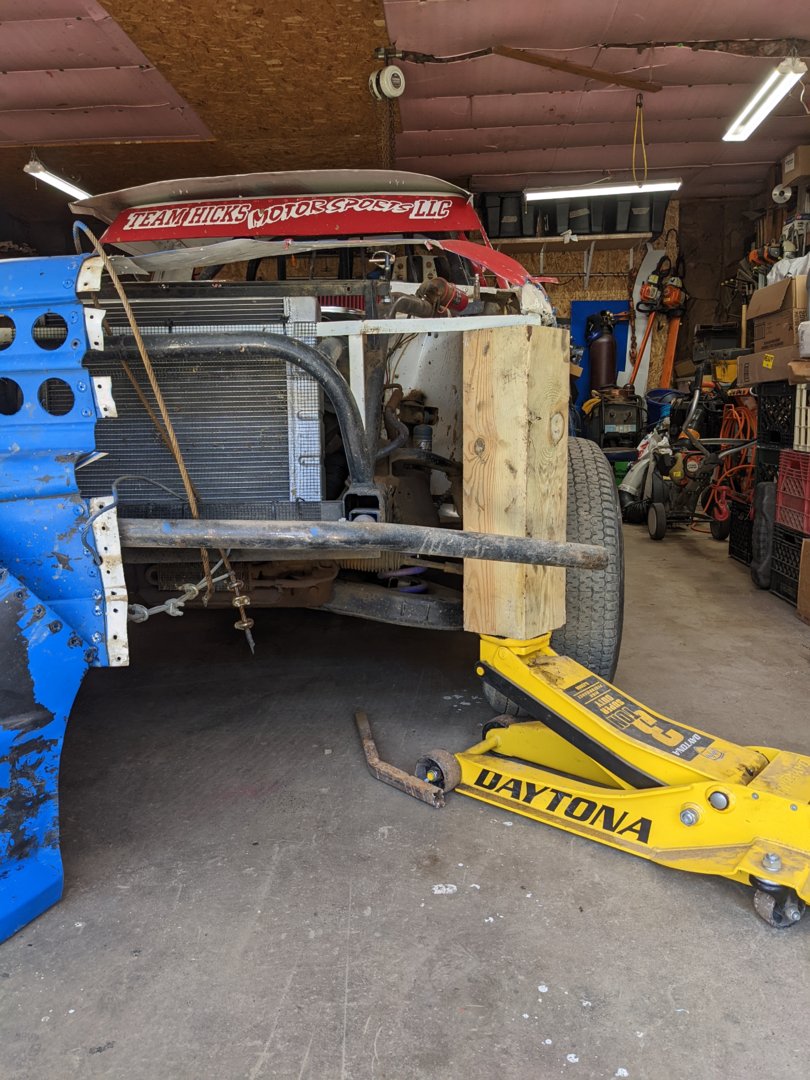 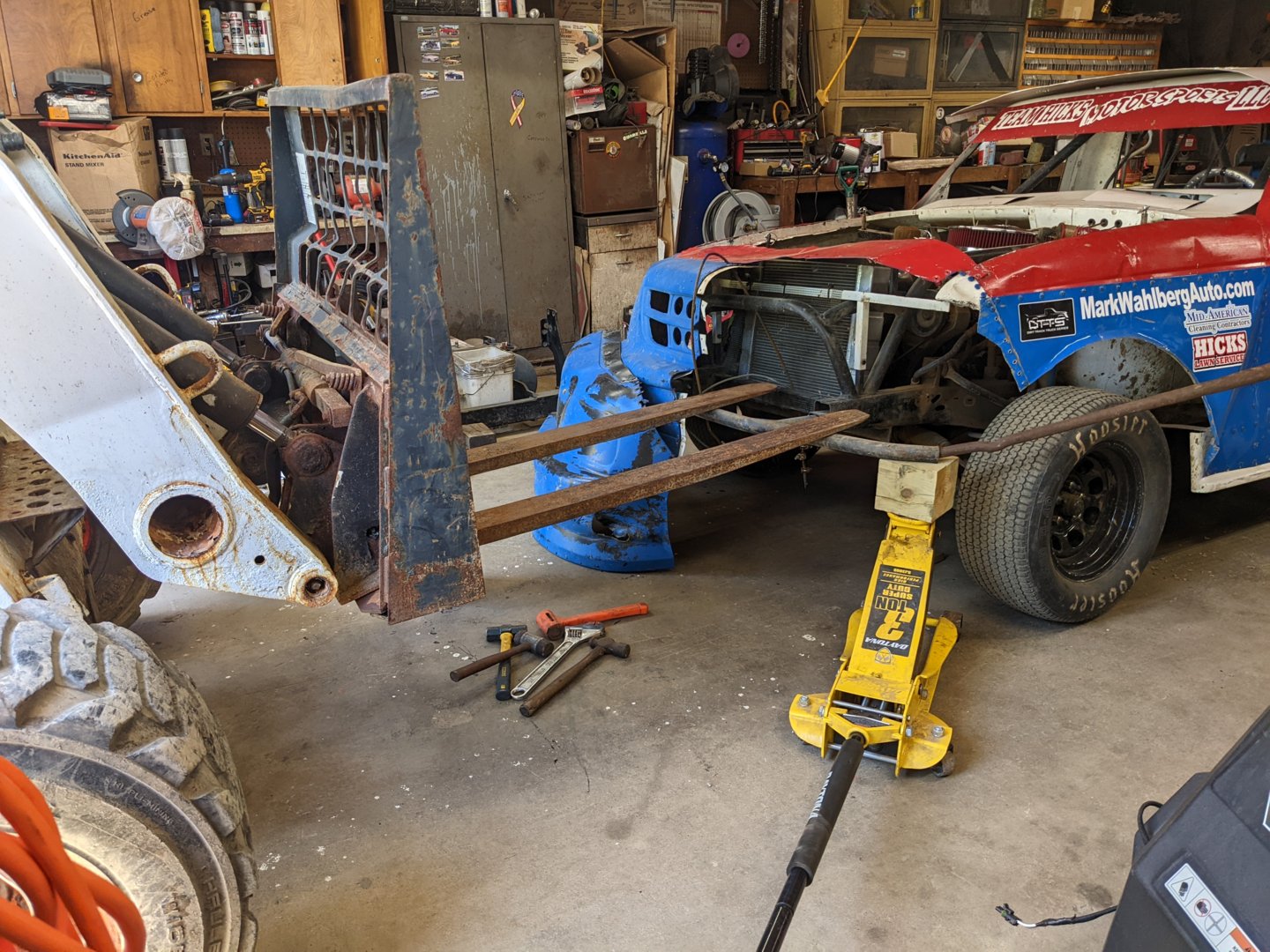 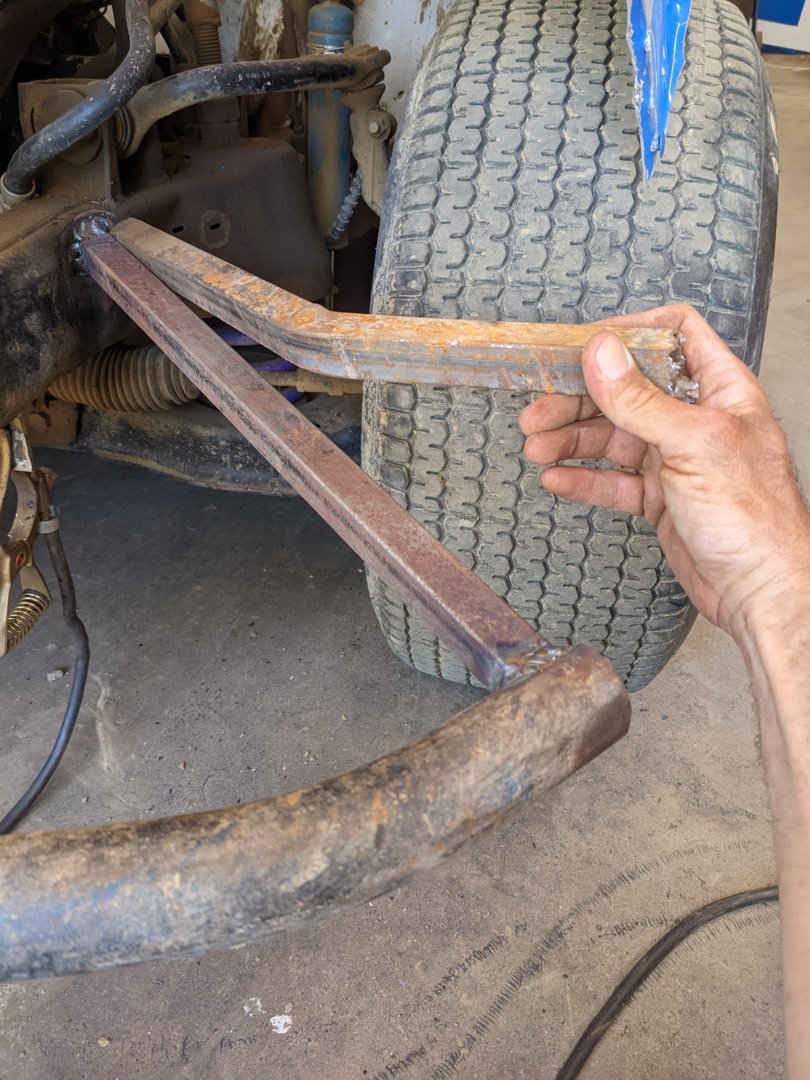 The local photographer uploaded to his website from last Friday's race. There are some really great pics. When you consider we are truly just a support class, it impressed me he takes the time to get pics of us all. Didn't hurt that I bought an 8x10 he had with him before the race. It was from the May race. He must print off a certain amount and carry them hoping the racers will like it and buy it.

I wanted to download a few, but it is $25 for a small image good for printing up to 5x7 pics. Also good for websites or social media. $80 for the full pixel download which could be used for up to 20x24" canvas. I suppose I'll narrow it down and spend the $25 for my favorite 8x10 print and let him keep the rights. Seems a bit high, but he is a local guy and the only other option is cell phone pics from the stands.

I swear every single time I got around the 9 truck we would draw a yellow before I got to the start finish line and he would go back in front of me for the restart. Probably passed him 5 times. Lol

Wish I was a bit farther in front of the truck on the bottom. This was my favorite moment of the night. Going three wide here is tough but I squeezed between them, we kept it clean, and I pulled away from them on the straight away. . . .then we had a caution and I was behind both on the restart again.

Reactions: finelyshedded, 5Cent, Big_Holla and 2 others

Montpelier Motor Speedway in Indiana tomorrow. I'm mostly loaded and ready. Trying to talk the wife into going. My second truck is on hold. My buddy who raced it last is going to fill in for another guy though. Be cool to see him able to get some more laps in.
Reactions: finelyshedded, "J" and CJD3

Solid night. Not exactly where I would have liked to have finished, but I'll take steady improvement as a big win.

Hot laps I was a hot mess. Truck wouldn't turn. Added a bunch of stagger for the heat race. Finished 2nd of 6.

Track slicked off throughout the night. Took a ton of stagger out for the feature. Made the decision to run the bottom the entire race. I was completely okay with the outcome so long as I stuck to my strategy. I was willing to live or die with my setup decision and my strategy. Started 3rd. Quickly moved to the lead. Led the first lap or two. Stayed low. Decided if they were going to pass me they were going to earn it on the outside on a slick track. The feature winner did so. He has a v6 truck and 60-70 feature wins under his belt. I'm okay admitting he is a better driver with a faster truck. Kept everyone else behind me. Stayed 2nd the majority of the race. With maybe 3-4 laps to go we had a restart for caution. 4th jumped the start and was in second before we exited the turn. They called it and we had another restart. He was supposed to go back to 6th but they let him restart 4th. ??? On next restart he jumped third immediately and slid up under me. I could bang doors and play dirty going into turn 1 or I could let him pass clean and try to get back around him. I played it safe. With a couple laps left I never got the chance to pass him "cleanly". I finished third. Second would have been nice, but the officials let it slide so I'll accept it. No sense in crying. That's part of racing.

Hard to complain if I'm being honest. Fourth race in the truck. I'm steadily improving. Got my first podium (in this truck) with the third place. Learning more on setup. Accomplished most of my goals. Number one goal in my head was to slow my brain down and run smart. I kept emotion out of my head and ran a smart race. Had I got fired up with emotions and threw a Hail Mary to get around the guy in 2nd, maybe I get sloppy and finish 4th or 5th. I'll take third and build on it. I'll keep getting there. 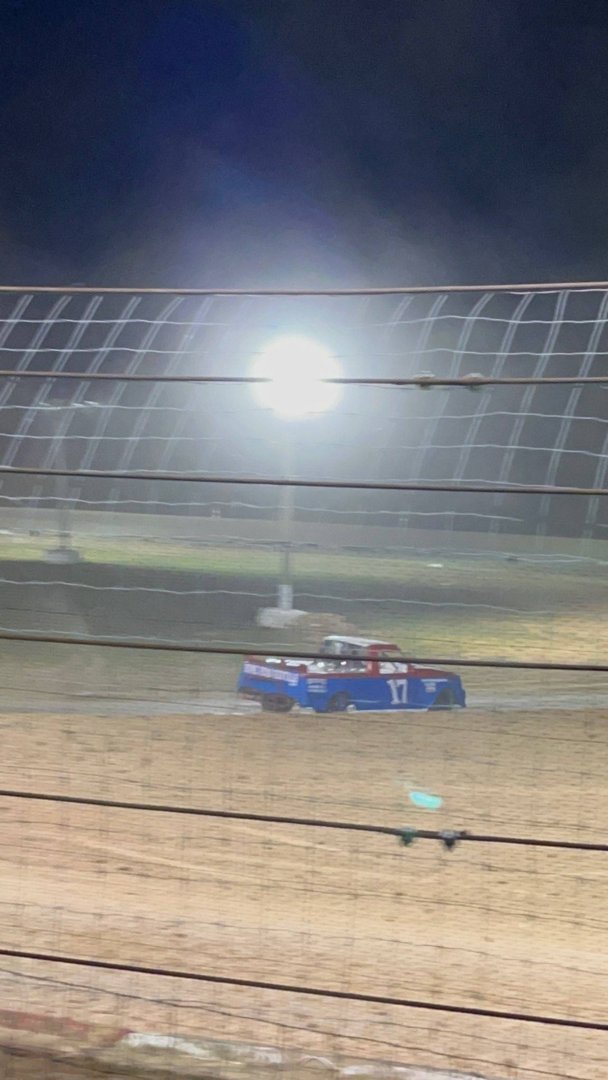 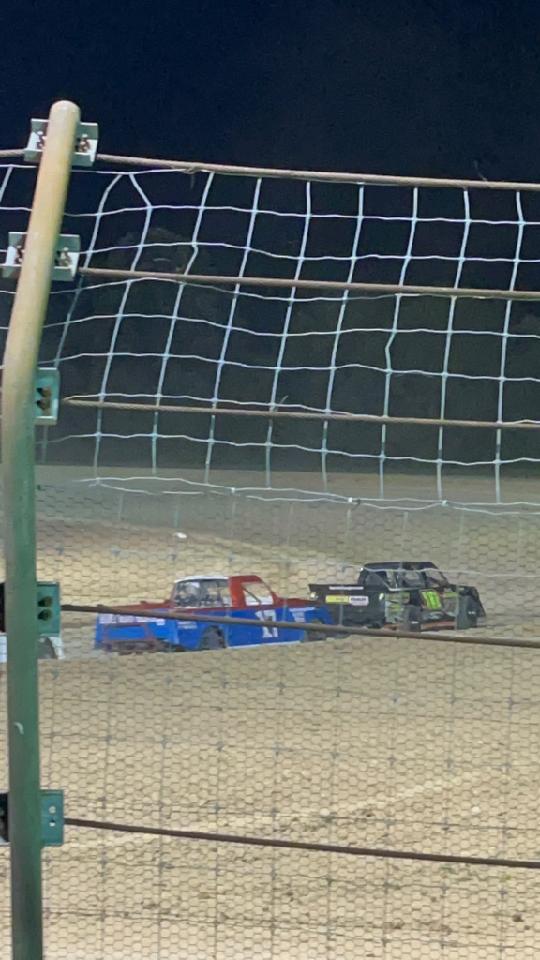 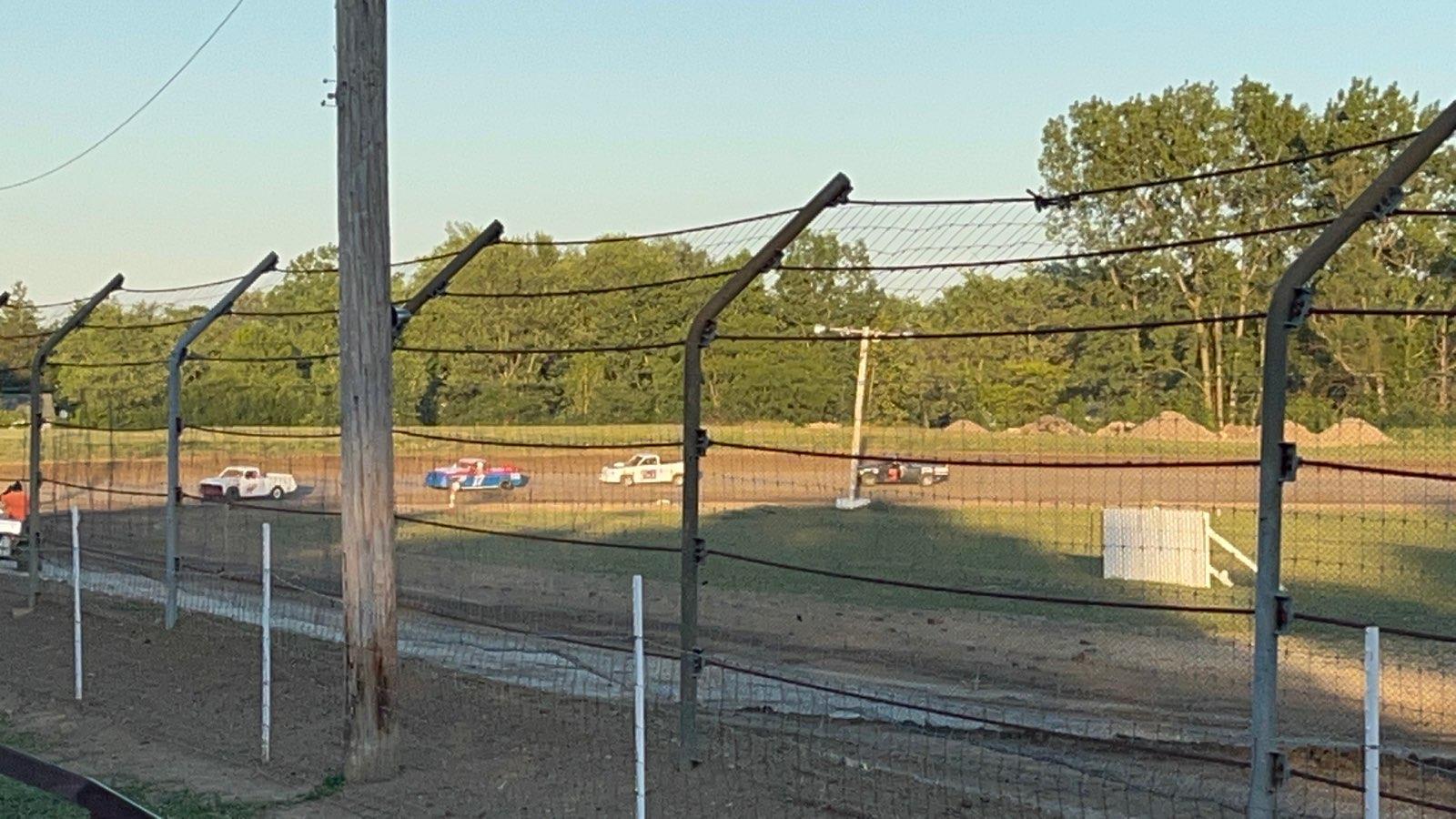 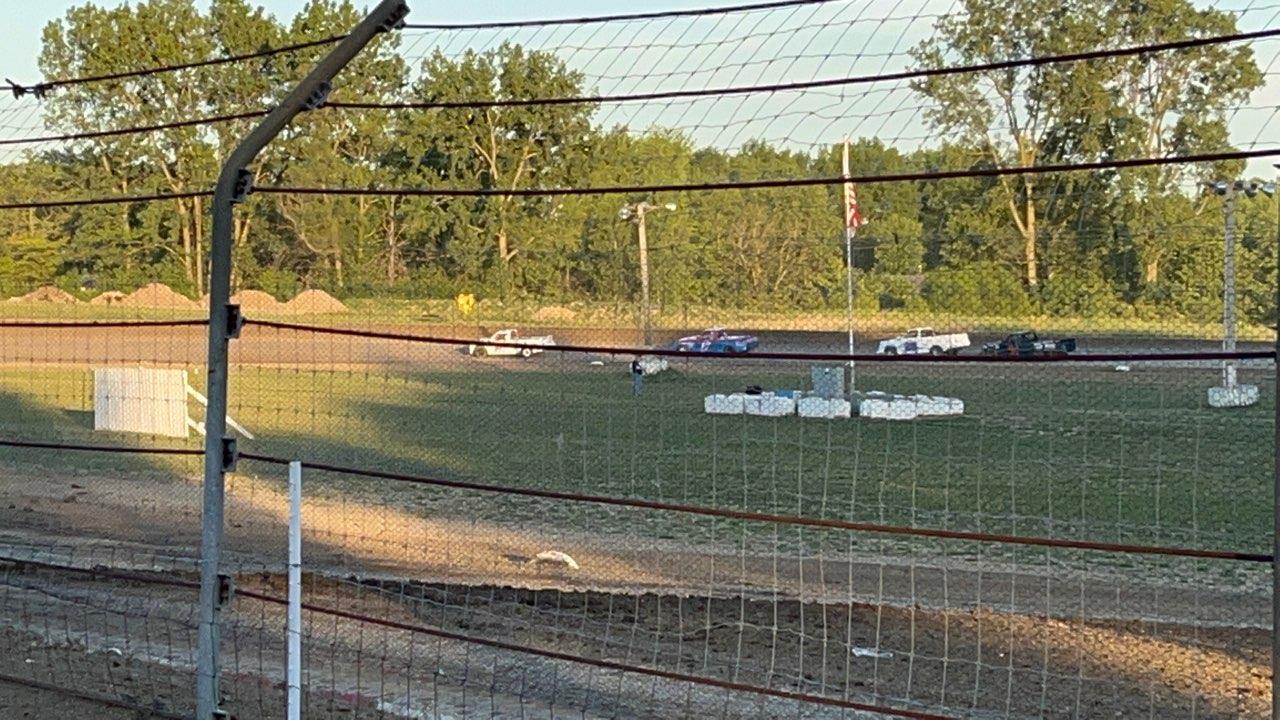 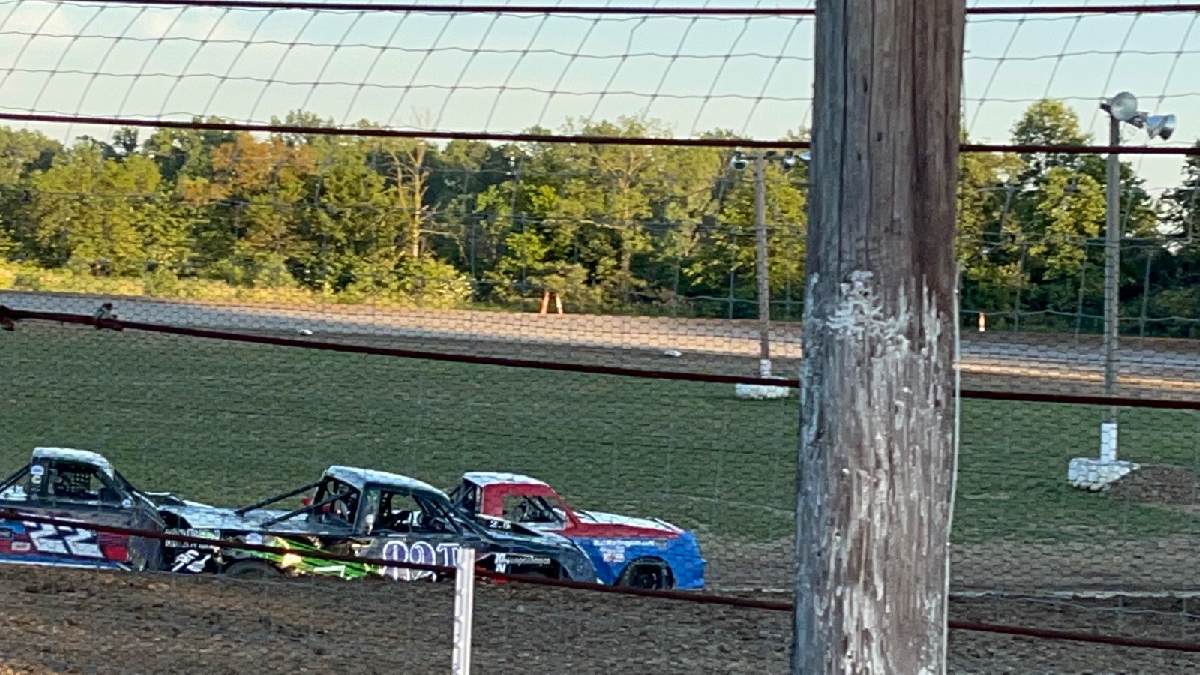 Reactions: Redhunter1012, Big_Holla, 5Cent and 4 others

Edit: video is posted. I've watched it multiple times. I lost 2nd place all on my own. Got conservative trying to preserve 2nd. As the cautions kept coming out, my line changed a bit. I quit hitting my marks. Didn't realize it at the time. Chalk that one up to being green. Seat time and studying video (and being honest with myself about it) will hopefully help to clean some of these mistakes up.

Feels way better than last year. Rather than working on a truck, I am now working on the driver. Pretty satisfied knowing I've got a truck that can run. Polishing my rough edges will come with time.
Reactions: finelyshedded, Redhunter1012, 5Cent and 1 other person

Sorry if you don't have Facebook. The promoter of our series recorded the feature, but put it on FB. Sorry there isn't a YouTube video so you all could see it.

Lead 3 laps. Second place the next 9. The. I started to play it conservative trying to protect the bottom. Lesson learned the hard way. In the future we will show our victims no mercy. Lol. To be honest, it is something I can build on. Need to maintain intensity and focus through all the restarts.