Alright, finally get a chance to sit down and post this up! Been a busy few days skinning/butchering/running meat to processor/etc. Going to be a little lengthy, as this has been quite a journey!


Well after 8 years of bowhunting, I finally have a respectable buck to put on the wall. I could go on for hours on the on how the last five years have played out and the frustrations I've had, with two nice bucks hit in front shoulder with no recovery, had bucks bust me drawing, wind me, come in on the wrong side of the tree, but all that is just bowhunting I guess, and i'm now starting to realize that every second of everything that has happened leading up to this past Monday was worth it!

I started my vacation on Thursday evening, with plans on hunting 3 properties I have permission for, two of which are on my main hunting land that my aunt owns. Thursday evening I had planned on hunting the property away from my main one, but that was overrun with hunters, and has been since, so I had to switch my focus back to my main hunting ground that i've spent countless hours hunting since I was 15.

With no real mature bucks on camera and minimal sign, the news that the neighbor that also has permission to hunt harvested a giant 9pt, was almost sickening the week before my vacation. It worked out that the Monday before last, the farmers in the area were in the field and the woods I hunt was the last within several miles with standing corn. I knew that would really help my chances if I could find where they were comining in and out at.

The first couple sits in my main area were skunks, I heard lots of chasing out in the standing corn but could not get anything to come in. After Saturday mornings hunt I decided to go scout a small thicket that is completely surrounded by standing corn with a waterway that goes all the way to the woods for easy/quiet access. As soon as I stepped in the woods I was instantly angry at myself for not scouting this earlier in the year, it was tore up with tracks and nice 3-4 and some 5 inch rubs. I quickly found an opening, hung my lonewolf alpha and sticks, and went to lunch.

I got back in the tree Saturday evening, and again, as skunked. That was three skunks in a row on my vacation week during what is supposed to be some of the best times of the year to hunt. On Sunday morning, I seen a small buck and a few does, which was great for my confidence, as the non stop hunting 6-8 hours a day with no sightings was beginning to take it's toll. I decided to take Sunday evening off and return to the woods Monday morning.

At first light a 1.5 year old doe came in to 5 yards, no buck following and she stuck around for 20 minutes or so, so I decided to take her. Long story short, glanced a limb, clean miss. At this point in my vacation week/long weekend, i'm ready to take my safety strap off and do a front flip out of my stand. But I head in for lunch, my plan was to hunt th is stand one more time and if it did not produce I would pull it out and make another move, really glad I stuck it out for one more hunt...

This is my set that I hunted that night....

At about 5 oclock I started can calling and trying to get the deer out of the corn. It was dead quiet so I knew if anything was within a few hundred yards they would be able to hear it. I had some special golden estrous in the ground in front of me about 20 yards as well beside a scrape. After the first few sequences of calling I had a real nice 7 point come out of the corn behind me and straight to my tree. He came to the only spot I could not draw and shoot on him and never gave me and opportunity.

I figured that would be the end of the action for the evening as it was around 5:20. I figured he was the buck making the sign in that woods, but decided to do one more set of calling before calling it a night. at 5:25 or so I hear crunching to my left. I didn't see him until he was right on me as it is very thick in this woods, but as soon as I seen the right side of his rack I knew I would take him if he gave me the opportunity.

He came into my lane, got downwind of me and the estrous scent, and turned and came right back toward me. I panicked at that moment thinking I needed to hurry up and shoot him before he got too close. I made a grunt with my mouth, thankful now that he didn't hear it as he was right behind a tree!!! He proceeded to come right into 15 or so yards and put his nose down in the scent I had put down, he gave me a quartering too shot, I tucked the pin right behind his shoulder and let the 100Gr Slick Trick Mag fly.

He mule kicked and took off for the standing corn. I thought I heard him crash once in the woods, but when he only went 50 or so yards in the corn before stopping I knew he was hurt. I heard him get up a couple times in next half hour or so and then nothing. I was jacked up to say the least. Didn't know whether to smile/laugh/cry, it was like a 5 year weight being taken off my shoulders as I got that arrow on that deer right in the spot I was aiming.

I said a quick thank you prayer as I sat there and collected myself, and immediately called my cousin Brent from the tree to tell him the news. I told him I had hit a nice 8 point with a really symmetrical rack ( I would later find out it was a ten). I think he was as excited as I was. We have evolved into bowhunters together the last several years and he has been through all the track jobs/mistakes/mis hits/recoveries etc, the past few years. If it was for him pushing me and motivating me all year long to stay after it, I know of several times I was ready to hang it up, one of the many things i'm thankful for!

I knew it was a pretty steep angle so I decided to let him lay for a couple of hours. I went back to my cousin's house and told him the story, he was pretty confident after hearing the details that it was a good hit. We returned to the woods a couple hours later. We found no blood leaving the woods at all. We ended up having to walk all the corn rows in the general area I heard him last. I found two drops of blood. My cousins came to my location, my cousin (bowhunthardin on TOO) shined his light a couple corn rows over and said "There he is".

I was in disbelieve at the moment, was SO happy to get my hands on his rack. The feelings/adrenaline at that moment were those that only a bowhunter will experience.


This is what we walked up on in the corn.... at that moment we realized he was a ten. 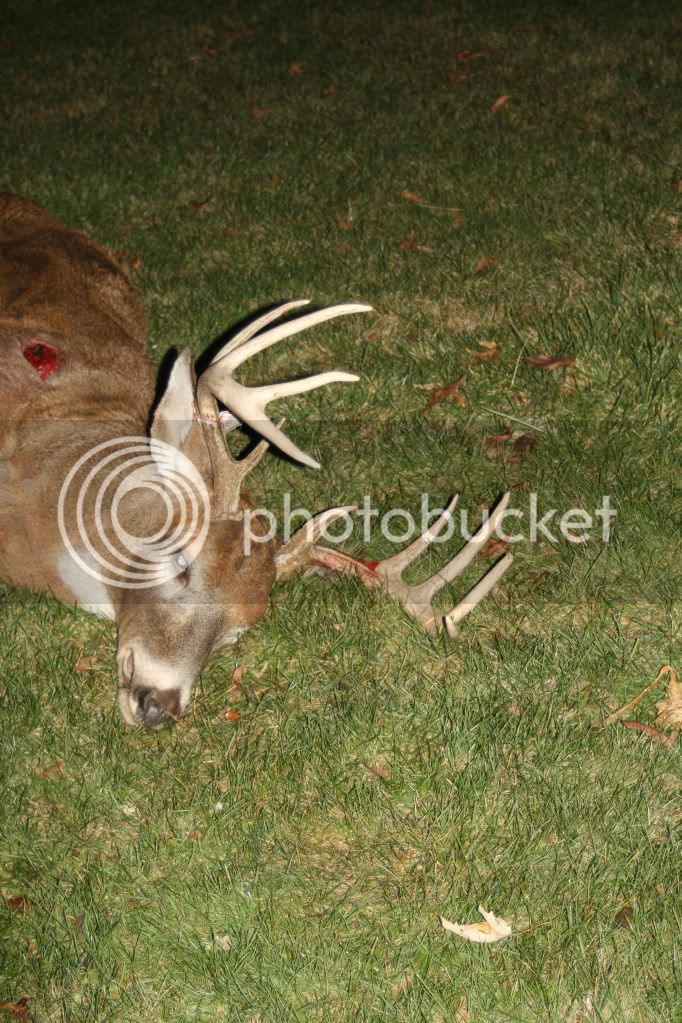 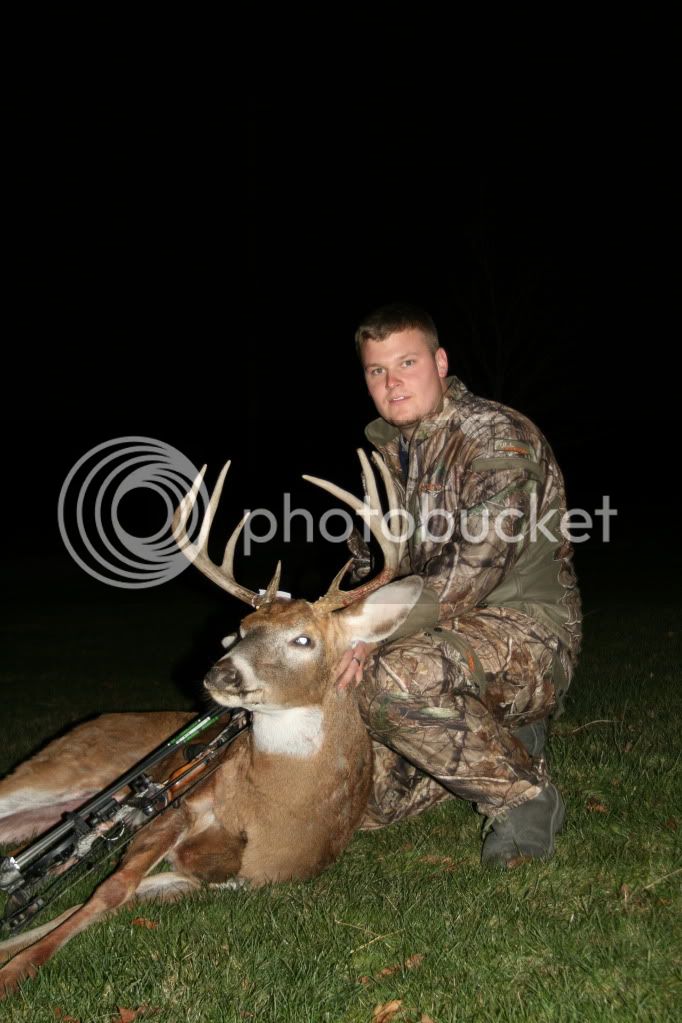 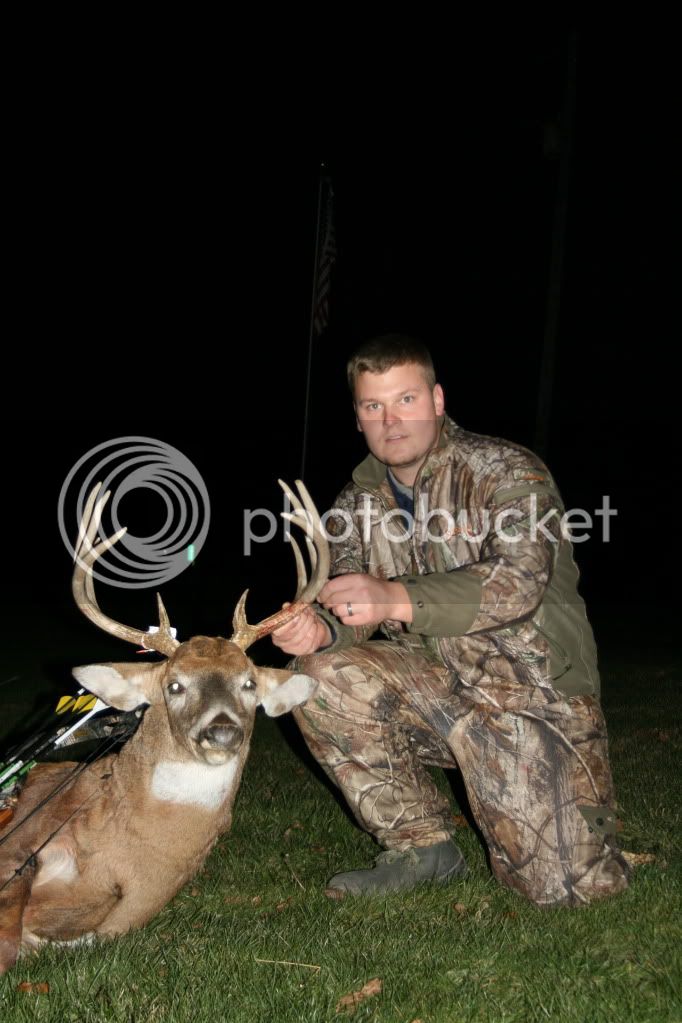 I'm very very thankful for the support I get from friends and family and for the opportunity to go out and enjoy the outdoors.

Sorry for the length, I didn't want to leave anything out! :smile:

That's a hell of a buck Drake and a great read to boot! Great work!!! Congrats!!!

Great buck and great story! Awesome to watch 5 years all be worth it in a great moment like that. That is great work man. I'm glad it payed off
B

Congrats on a great buck. The recovery of that deer was better than any of my own. It was awsome to see it all come together for you!! Although my liver is thankful the meat is at the processor and the rack at the taxidermy..LOL!!

Fantastic job! Thanks for sharing a great story.

Congrat's and thanks for sharing the story.
R

Thanks guys! I really appreciate it!

bowhunthardin said:
Congrats on a great buck. The recovery of that deer was better than any of my own. It was awsome to see it all come together for you!! Although my liver is thankful the meat is at the processor and the rack at the taxidermy..LOL!!
Click to expand...


Thanks man! I would like to know how many beers we put away replaying how it went down and me staring at him hanging in your garage!!

Hey NW, that's a great story and great pics to boot, and that is a sweet sweet lookin 10pt'er!
Congrats to you!

Hell yeah man, one heck of a buck there! The bucks are dropping like flies. I'm itchin' so bad to get out there, I'm beginning to wonder if I've got crabs!

Thanks for the story Drake. That is a great buck! Glad you recovered him. Hopefully I can have my own story before the season is over. I am starting to think late season patterning is going to have to work for me.

That is a great story to go along with a great buck. Thanks for sharing and Congrats!!!!!

Congrats on a great buck Drake! Great story. Glad you stuck with it and were rewarded.

hickslawns said:
Thanks for the story Drake. That is a great buck! Glad you recovered him. Hopefully I can have my own story before the season is over. I am starting to think late season patterning is going to have to work for me.
Click to expand...