Anyone else been out to check local ice conditions yet?

Here in NE Ohio I've checked two locations so far... Yesterday Hubbard Valley Park's lake had about 3" and was completely froze over. Today I ran over to Chippewa Lake and it was 2-3" in most spots near shore, and was frozen completely across. There may have been thicker (and thinner) spots, but I didn't want to venture out too far on my own today. 80% of the lake is crystal clear ice right now, but the south end is milky white... likely because it froze right before the big snow we got a week or so ago.

I may be doing some ice jigging this weekend.

JBrown said:
Anyone else been out to check local ice conditions yet?
Click to expand...
JBrown,
There may be some help by looking at these ice fishing specific forums:
www.icefishohio.com
www.iceshanty.com/ice_fishing/index.php

Good luck and be careful out there!
Bowhunter57

Bowhunter57 said:
JBrown,
There may be some help by looking at these ice fishing specific forums:
www.icefishohio.com
www.iceshanty.com/ice_fishing/index.php

Good luck and be careful out there!
Bowhunter57
Click to expand...
Thanks, 57. Iceshanty is a great resource! I signed up on that site a year or two ago.

Buddy fished a pond in ottawa county and said it had eight inches of ice yesterday. Any body over by East harbor state park seen any action on the ice at the state park yet ?

Guy I work with went to east harbor a couple days ago. Ice was good... 6-8" throughout. He didn't do very well though. Only caught a few dink gills. Word on the street is guys are taking quads from Catawba to SBI already. I haven't heard any reports on the walleye bite though.

Cool thanks for the report!!!! Yeah its kind of hit a miss there but when you hit its great fishing!!!! Been a few years since we have been on the lake but we head out of crane creek when the ice is good!!!

Glad i didn't go out and get wax worms!!! Damn weather. Hope we dont lose all the ice before it gets cold again!!!

Actually that little warm up was good for us. We got rid of all that snow cover and its gonna lock up hard again this weekend.
C

I got out on the big lake Thursday,Fri and sat of last week out of metzgers on thur and Fri and catawba on Sat. Did alright all days. Took some time to find fish on Sat. Fished Sandusky bay on Sun along with east harbor. We found some good crappies at east harbor.

We went for a ride sunday out to metzgers and didn't see anybody out that day but looking over towards crane creek i thought i could see a airboat about two miles out. Looks like the weather is going to be great now!!! Should be out to east harbor in a few days. I hear the best time to go is during the week when there is less traffic on the ice. Would love TOO get a nice batch of gills for the fryer!!!!

Any place to get wax worms around catawba?

We are around 10+ inches up here off of Lake St. Clair now. Everything I am hearing the perch bite is picking up. Was out two weeks ago with the family and caught 9 keeper perch and just fried them up last night for dinner. Man they were soooo good!! Good luck to you guys that make it out and be safe!

Thats awesome Big Holla!!!! Scored some wax worms so im good to go!!!! Going to try east harbor tomorrow and going there sunday with my buddy and his sons. I like fishing were you can see the bottom lol but getting out on the big lake for walleyes is fun also. Good luck TOO you also!!!

GoetsTalon said:
Any place to get wax worms around catawba?
Click to expand...
Check out the Walmart in PC near 53 and 163. They usually have a good ice fishing selection and plenty of waxies.

Big_Holla said:
We are around 10+ inches up here off of Lake St. Clair now. Everything I am hearing the perch bite is picking up. Was out two weeks ago with the family and caught 9 keeper perch and just fried them up last night for dinner. Man they were soooo good!! Good luck to you guys that make it out and be safe!
Click to expand...
Awesome news man. My crew and I are leaving tomorrow morning and heading up to St. Clair for the weekend. I'm really looking forward to it.

I ended up getting some but will remember walmart in PC. Thanks!!!
C

If you guys would i would love some info on st Clair. I have never been up there and would like to know where go launch from. Is it walking or is a quad needed. Etc etc...not looking for gps cords but just some general info.

jagermeister said:
Awesome news man. My crew and I are leaving tomorrow morning and heading up to St. Clair for the weekend. I'm really looking forward to it.
Click to expand...
Sweet, dang if I wasn't working today and working on the house all day tomorrow I'd try to get together with you. Where you planning to go? Genos is where we went out of and where most of the decent reports are coming in from. You'll have plenty of company if you do go there tho, a guy posted up some coordinates of his latest big catches earlier this week.

Great luck to you!!!

St. Clair was a bit of a disappointment. Don't get me wrong, we had a good time but it wasn't what I was led on to believe... at least not during the past 3 days. We did catch a handful of fish, but I didn't see anything that would make me want to go back in the next week or two. I'd probably go back, but not when there is plenty of ice around here to fish. We caught some big pumpkinseeds and a few decent perch, but overall the perch were tiny. I spent more time staring at the camera and playing keep-away from dinks than I did catching fish. We tried LOTS of spots too so I won't be accused of not trying. LOL We had a quad and trailer and were not afraid to move around. There was a shit ton of guys out there, and very few were doing any good. If I had a good fish spear, I could have done a little better on the perch.

Our "best" spot ended up being in around 7 FOW with standing weeds. However, the fish were tough to find. Your buddy 3' next to you could be seeing fish left and right while you stare at a blank screen.

Like I said, it was fun and we had a great time but we were far from setting the lake on fire.

Sounded like a lot of fun jager!!!Went out friday to east harbor and there was only four guys out. I walked out with two of them after they just got back in from ckecking the ice and they said it was good to go. I get out there and get set up at 11:30 and start catching fish right away. Some small with some keepers. At around 2:00 a old timer walks out to talk to me and to see if im catching any. So we BS a little and he walks about twelve feet to the right of where i am and falls through up to his arm pits and yells help. I just about panic but dropped to my hands and knees and made it to him and pulled him out. We were both shook and i say we got to get you out of here. He said he was 69 but never got his name and helped him get back to his truck with his stuff the whole time him telling me thanks and to be carefull out there. I drilled through eight inches of ice and twelve feet away it isnt safe. I had fifteen gills and a perch and decided i was done for the day. Told other guys going out to stay away from where i was and to spud bar all the way out. Went back saturday and there was about fifteen shanties out so with spud bar and ice pics i headed out again and the fishing was AWESOME!!! Ended up with 36 keepers and nobody getting wet. Went back sunday in the high wind with my buddy and only got six and he got eight. It was like the artic tundra on sunday out there and we should have stayed home and watched football lol!!!

A buddy of mine sent me this the other day, 3 miles off Catawba he said 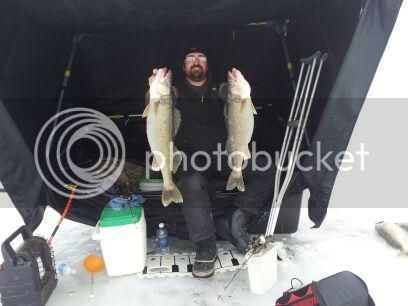