Jamie said:
about a month ago I was talking with my financial planner. in light of everything that is happening and the bottom was dropping out of the market he's telling me half of his clients are in panic mode and half are excited about it. I'm of the latter, and started seeing dollar signs when the market went below 25k. we made some significant additional purchases of stocks we already owned that have been doing well when the DOW was just over 19k, almost low pointing it perfectly. bought all of them measurably lower than the first time we bought. one notable one is BP. we bought a few hundred shares right after the Gulf oil spill at about $27/share when their stock tanked. it pays a great dividend, and at one point it was over $55(doubling my money) a share. it hasn't been anywhere near that in several years, but we bought more BP a few weeks ago for $17 and change as the dividend has remained solid. I think we've tripled our money on BP in about 10 years. according to Cliff, "fortunes are made when there's blood in the streets, my friend." we'll see.
Click to expand...
I forgot to say that what we did is called "averaging down", which means we lower the average price/cost for the asset by buying it again at a lower price. not the sort of maneuver to engage in unless you intend to hold on to the asset for a long time, which I do, and are very confident the value will go up again, which I am. I'm not a gambler most of the time, and I probably wouldn't have the stones to put up the kind of money we just did without my experienced professional money manager vigorously encouraging me to empty the cookie jar and dig up all those coffee cans in the back yard.
Likes: jagermeister, bowhunter1023 and hickslawns

Now is time to buy the Giants. Companies with historically solid financials. Massive companies which have always treated their share holders well. Companies they bounce back after catastrophe. Companies you don't plan on selling. Just my opinion. I'm a dumb lawn mower jockey so don't take this as financial advice. Lol

Tonight will be an interesting start to earnings season. We’ll see how the futures look compared to market open, and how the market digests as the household names start to report. 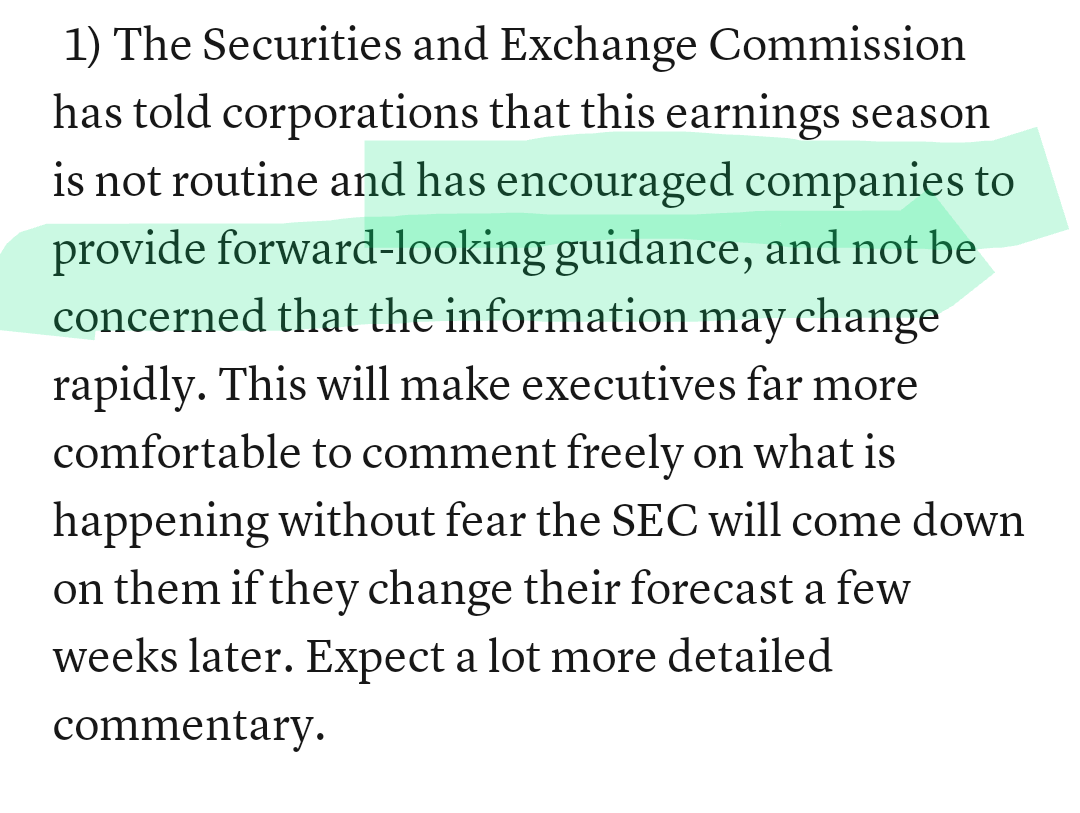 Also, if you plan to invest without the help of an advisor do plenty of research and look at some of the DIY tools available from firms like TD, Fidelity, Schwab and the like. Here’s some perspective on recent volatility and the recent bounce. https://research.tdameritrade.com/g...KH8D6VR3P3D2IJNPG6&CID=1-SN20200413004408-MAP
Be aware of how derivatives can impact volume and thus equity prices. Also be mindful of the bid/ask spread on thinly traded stocks and ask your firm of choice about their order execution quality. A real sneaky way that broker dealers can lag behind “peers”.
Likes: hickslawns

I expect lots of buying as this “free money” falls.

Seems like there was some noise surrounding the stock around then. Can't remember exactly. Maybe drivers demanding more money?

You could’ve doubled your money on 100 different stocks. It’s been volatile as eff since early March. Could’ve just as easy lost your ass on any number of stocks bought then.
Likes: hickslawns

It’s been a gamble lately although time and lower prices provide you the current edge. Stick with the old standby tickers to even raise the bar in your favor.
Likes: hickslawns and jagermeister

So far, so good here. In it for 2 bills, up 14.5% so far. I'm going to chip away until I get to my goal investment, then let it ride and make my moves based on that initial investment. I'm only 37, I figure a nice little investment today that's well played over the next 25-30 years should finance a few retirement hunts!
Likes: hickslawns, jagermeister and aholdren

TDOC and SMG have also done very well for me lately. It’s getting expensive to play again.

Buckmaster said:
TDOC and SMG have also done very well for me lately. It’s getting expensive to play again.
Click to expand...
That bounceback by SMG is quite impressive!
Likes: bowhunter1023

Buckmaster said:
TDOC and SMG have also done very well for me lately. It’s getting expensive to play again.
Click to expand...
Letting my winners ride. Right now it is pretty easy. Most everything is steadily gaining. I've got a couple of doubles going in gold/silver royalty companies. Can't say I've ever had one double, let alone two. Pretty exciting seeing how the gold and silver markets seem to be taking off right now.

Here is the other side of this coin: I put some money into gold/silver stocks 2-3years ago thinking "There is NO way this market can keep climbing." These stocks bounced around a little over that time period. Some up. Some down. None more than maybe 10-15% up. I missed out on the entire market gaining roughly 30% last year. BUT, had the market dropped I had a nice hedge to protect against downside risk. I am far far far from a pro at this. Hind site is always 20/20 though.
Likes: bowhunter1023

I'm going to fire my investment manager. Guy is clearly a rookie...

bowhunter1023 said:
I'm going to fire my investment manager. Guy is clearly a rookie...
Click to expand...
Ha! Don't feel bad. The market volatility lately has been absurd. The best thing would probably be to just go offline and not look at anything for at least 2-3 months. lol
Likes: OhioWhiteTails, bowhunter1023 and Jamie

Yep. I have not looked in on my portfolio for two months. Probly stay away for a couple more months. Imma too skeered. 🤓
Likes: jagermeister

bowhunter1023 said:
I'm going to fire my investment manager. Guy is clearly a rookie...
Click to expand...
Emotional decisions lead to bad outcomes with $.....walk away for a bit.

Now is not the time to do a baseline check.
Likes: hickslawns and jagermeister

I’ve always throttled everything back in election years, just been my thing too do. End of 2019 was no different. Don’t get the returns but don’t get any surprises either. It’s served me well over the years. Too be honest I don’t even remember why I even started doing it. May have been the whole Busch/Gore debacle back in the day. Talked too some former coworkers who didn’t and are regretting that move, especially the ones within a couple years of retirement. Little too no time to recoup from it.

I was being mildly facetious and realize it'll rebound. I'm still confident in my picks long term. I may dump a few of the smaller ones along the way, but plan to ride the big horses for a while. But opening my app this morning about made me choke on my coffee.
Likes: 5Cent and jagermeister
You must log in or register to reply here.
Share: Facebook Twitter Google+ Reddit Pinterest Tumblr WhatsApp Email Link