I’ll do a quick run through of my season so far. I had buddied up with Joe pre season on scouting. We had 2 birds for the each of us scouted out. Around April 1st I started watching a long beard, pinned him down, and he got smoked on opener. Joe’s bird disappeared. 4 days after tagging mine, I went back on a quick morning scout, pinned another bird, next morning, Joe blasted him. The next 2 weeks turkey hunting talk between us was sparse to none. Joe occasionally checked his property and nothing.

So came Friday May the 13th, I began feeling the symptoms of a sinus infection, great. The same day, I stopped and spoke to a buddy that lives within a mile or 2 of where I had land to hunt. He had mentioned for 3 days he had seen a flock of birds in the field around 5 pm. I told Joe about it, he mentioned we should go, but I didn’t show much interest in going with the weather forecast. The next morning my sinuses were screwed and my throat felt like someone took sand paper to it. I went to Urgent care, got antibiotics, then went home and slept till 4. I woke up feeling a little better. Joe had then texted me to come hang a stand or clear lanes with him. On my way to meet him around 5 pm, I had seen the birds my buddy spoke of. I told Joe I’m now half tempted to get up and go after them in the morning. I told him Id let him know how I felt, but I started getting cold chills that night. Great, a fever. I woke up this morning feeling like shit, with more cold chills but my head was clearing up, sore throat was gone, but now the cold moved down to my chest.

I texted Joe a possible plan after studying aerials around noon and told him I might go if I feel better. Immediately afterwards I started pounding down antibiotics, aspirin, and drinking a bunch of liquids. Success, my temperature went from 101.2 to 99.5. I texted Joe, told him I’d pick him up at 4:30. I was feeling loopy but better.

The plan was to swing wide of a bottom they hang out in, and ambush them in the field. 2 bucks in velvet came to inspect our first setup, coming within 10 yards of us. No turks though. We move, I hit the slate, hen lightly yelps back. We come to the conclusion she’s on a nest. We talked our next plan over, and I told him there was an acre or so of grass down in the bottom with perfect spruce roosting trees next to it. So we began to sneak to it, and by the time we arrive to the spruces Joe tells me to “Stop”, “Birds in the Field". We stop and study, 3 hens at 80 yards, he tells me too crawl to the next 2 spruces. We make it undetected. We agree that there has to be toms around, and shortly after, I focus my attention away from the hen and I see a 2 year old, broadside at 25 yards that magically appeared. I quickly grab my gun as he scurried away, Joe starts whispering “shoot shoot” and I wasn’t comfortable with the shot. Joe starts to harass me saying “you could have made that shot”. I felt my opportunity on a last minute bird was gone. About 2 minutes pass and I spot movement through the brush at 15 or 20 yards. I see what I thought was a long beard and feathers. I had my gun up, safety off, waiting for this bird to enter the field. I see the head then the chest, and about a 3 or 4 inch beard. I instantly thought “You gotta be kidding me” :smiley_boos:. I knew it was the last day of season, and I always wanted to shoot 2 birds in one season, something I never did, but damnit, why a Jake? I whisper to Joe “it’s a Jake”. Joes exact words are……”F*ck it, shoot it” lmao. Peer pressure, the shot rings out:smiley_crocodile:, birds tumbles, we stand up, and not 5 steps behind this bird in the brush was a mammoth of a turk, beard was 10+ inches, visible spurs, and just booking ass. I told Joe I’m going to give him shit for the rest of his life because of this :smiley_crocodile:. I knew I saw a long beard……


Your alright in my book Joe , One of my best if not the best season I've ever had.

Nice title asshole.... lmao... Off to read the rest of the post.

Lmao.... Yep. That's about right... Bottom of the 9th. 2 outs. Swing for the fence! If we had another day to hunt i might have agreed to giving the jake a pass. Especially knowing there we're 2-3 long beards in he area. But man, we just spooked one Tom, and it's 7:00pm... Nothing has responded to calls and we only have about an hour left of season.

The sad part was right after i said "Fuck it. Shoot it" I saw another bird behind the jake... I figured Alex saw it too and was going to wait... BLAM!!!!! Nope! lmao He blasted it... The big Tom flies over our heads...

The field is to our left. We're looking right down the line of big spruce that we guessed they were roosting in. The property line is to our right... We figured the birds would be down in this field because of the wind in the upper field, the rain, and they were good roosting trees. The kicker is the property owner to the right is one of those "hippie / city / moved to the country" type... You know the kind. Their house is up the hill maybe 100 yards to our right through the woods. Not wanting to be harassed (regardless that we're in the right) we plan to shoot and scoot. Best to just not be there and let them speculate than see us, say stuff, and maybe give the property owner a hard time...

BLAM! I jump up and run out into the field to grab the turk... He got the tag on it and I scooped it up still thrashing and tucked it under my arm like i just recovered a fumble on my own 5 yard line.. We get a ways in the woods and the bird pecks me.. I look down, the bird looks up at me with it's mouth open and it's blinking.. Shit! This things alive! I put it down and step on it's head after some failed attempts to hit it in the head with a small rock the size of a bar of soap.... Alex later told me he looked back and it looked like i was giving the turk a judi chop. lmao

I tuck it back again and off we go.... As Alex and I are booking it I spot a monster shroom... Like 9 inches tall and a cap like a baseball... I took a knee with a still kicking bird under my arm and plucked it... Stood up and ran 5 more steps spotting another one... Knowing the hippie pain in the ass neighbor was coming Alex says.. Why do you keep stopping, how many of these damn things are you gonna pick? I think i studdered "roons, giant roons, everywhere! Can't leave em, sin..." So here we are... Bird tucked under my arm like a chicken, still kicking, running and stopping every 5 feet picking big ass roons... lmao.. Classic.

You guys are a hoot. That would have been some of the funniest shit ever lmao.

HAhaha! What a story. Congrats on the bird Alex.

Not much of a turkey guy but this is a great story!

Funny shit Guys!! And big congrats on a fun season. That's what it's all about! :smiley_cheers:

The Jake and Joe's shrooms. 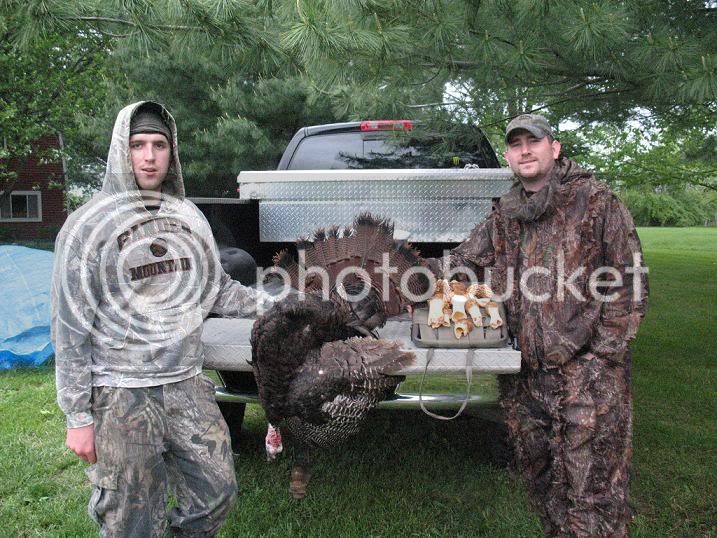 Not entirely sure how this goes towards the score board. I think it goes as Joe's bonus?

You are correct Alex...the bird is scored as Joe's bonus. It doesn't benefit you since your other bird scores better. Why do you think Joe was rushing you to shoot the first bird that gave a shot??? Cause he knew he would pick up some points regardless of how big it was!!! rotflmao

huntn2 said:
You are correct Alex...the bird is scored as Joe's bonus. It doesn't benefit you since your other bird scores better. Why do you think Joe was rushing you to shoot the first bird that gave a shot??? Cause he knew he would pick up some points regardless of how big it was!!! rotflmao
Click to expand...


And so i could get my sexy pic taken. lol Seriously though.. I would have loved to have the one right behind it... Fugger was a hoss!

:tantrum: I think that bird was big enough to tie up the scoreboard. lmao

Joe just wanted to get shrooms bigger and longer then the beard lmao.

Congrats Trip. Great bird and a heck of a funny hunt.

RedCloud said:
Joe just wanted to get shrooms bigger and longer then the beard lmao.

Congrats Trip. Great bird and a heck of a funny hunt.
Click to expand...

Those shrooms are huge!