When trapping muskrats there's times you will run into situations that rule out most conventional sets. Now I'm not saying floats aren't conventional in some areas, but they aren't the norm in most of my spots. So when I have a spot with hard to find dens, hard to find runs, no huts or feedbeds, soft bottoms, and most importantly an area that has wide fluctuation in water levels, I'll go to floats.

There's no limit to the design of a rat float or a trappers imagination. I have a spot I've been wanting to run a few floats and haven't made any in years so here's the first in awhile for me. I want to be clear that you can use about anything that will float to make these. I puchased nothing for this project, just made due with what caught my eye in the garage.

This float is 24" long and the side boards are 6" wide. I played around with different amounts of foam and designs using a large cooler of water until I got the right buoyancy I was looking for. I wanted to mimic a feedbed and would be adding mud and grass as visual attractants. My whole thing here is to not stick a damn apple or carrot on top of a piece of plywood. I wanted something a rat would want to crawl up on. We used to use some that were similar back in the day and caught rats with them.

The #2 vics were never the best coon or canine traps, but are nice heavy traps that will pull a rat down under water fast. I have plenty of them and I figured I might as well put them to use. You know what they say, A trap hanging on the wall is catching no fur. These traps don't sit real level anymore, but I'll be bedding them with some mud in the field.

I did use some bait on top of the grass. It's a home made concoction I'll share at another time. I will tell ya it smells like a mix of beery flavored koolaid and beaver castor. The coon love it and I have pulled rats with it. It's not beaver season so I had to be carefull where I use this bait. Although a beaver will pull right out of them old vics.

You can and will get coon to investigate floats so make sure your traps are anchored good to the float. If you do get a coon, he will be there waiting or he might pull the float off the dowel stake and will tangle up and be waiting for you on the bank. My float can ride up and down the dowel rod stake through the hose clamp screwed to the side when the water level goes up or down. 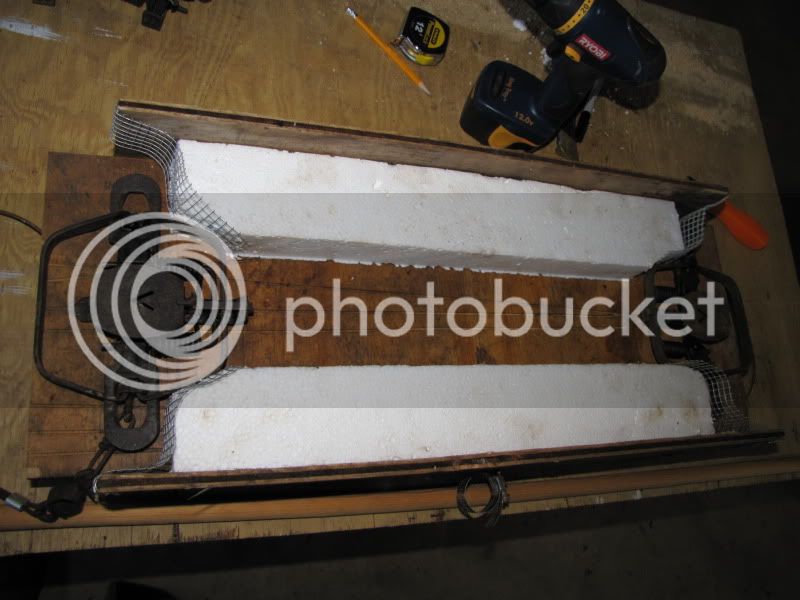 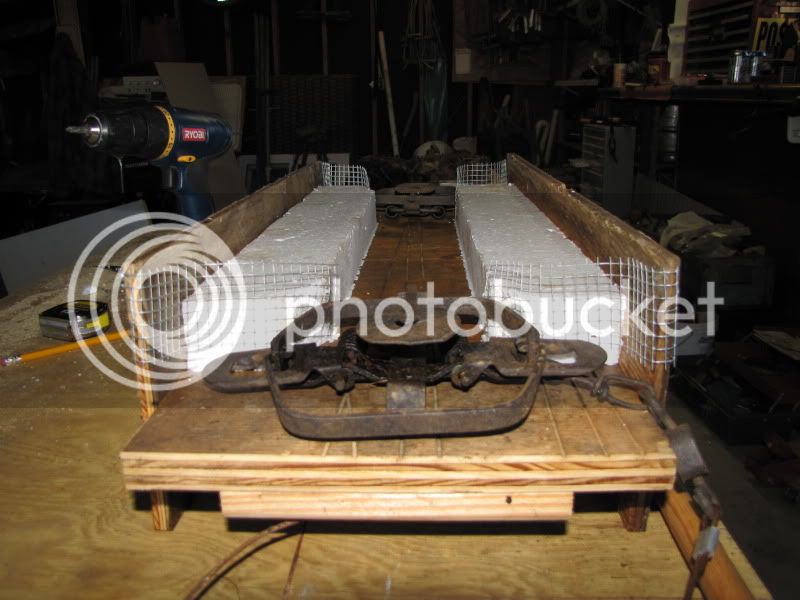 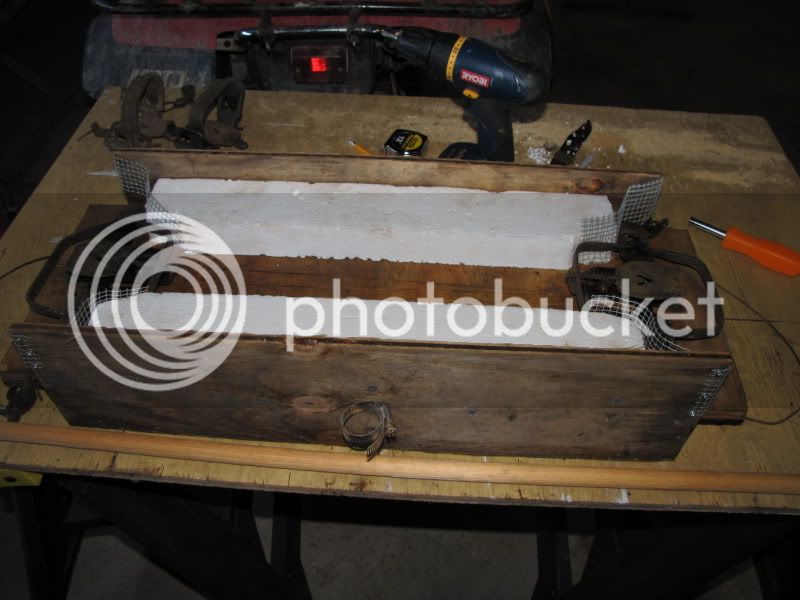 After adding mud and grass, I got my trap pans just under the water. 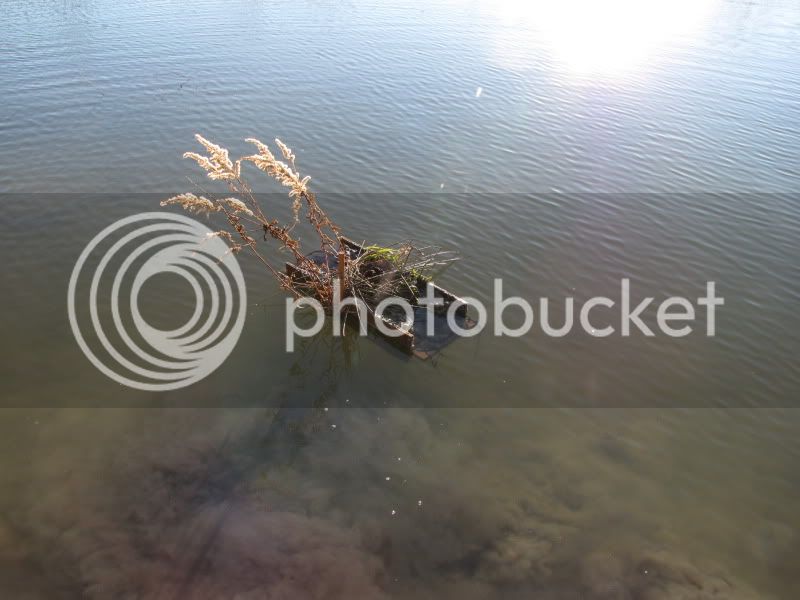 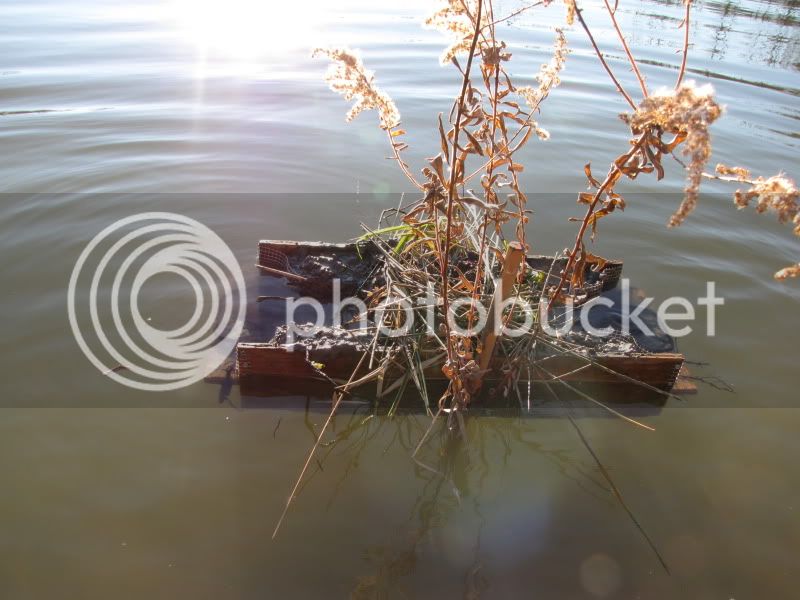 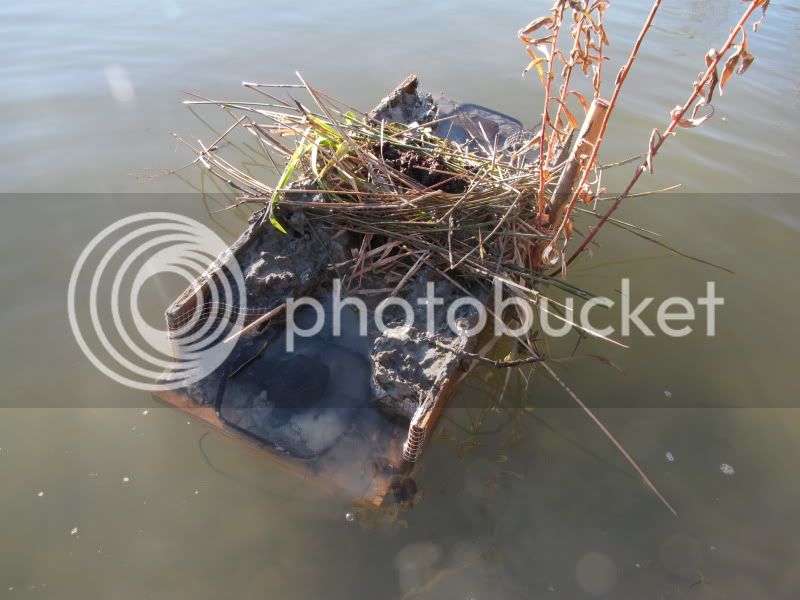 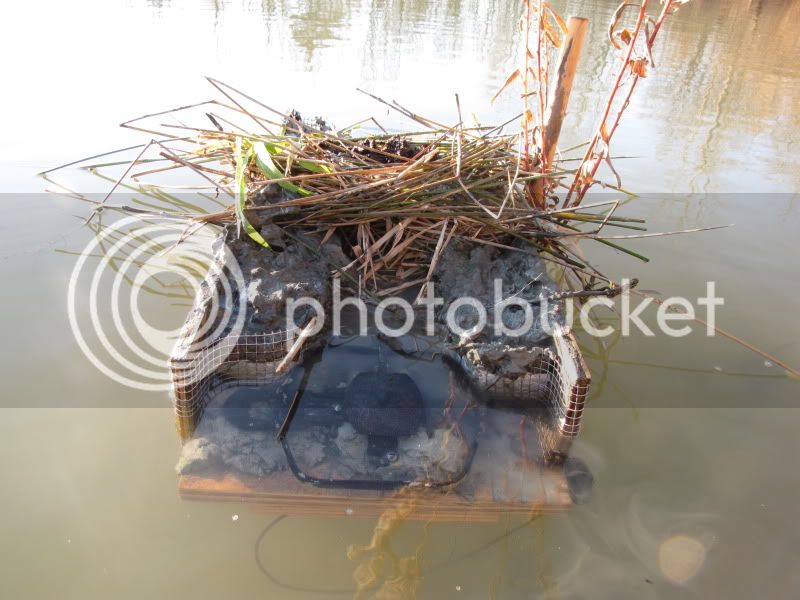 Nice set-up, thanks for sharing... And good luck with the set-up I think you'll have some luck with that one...

Kick ass dude. Rats look like they are going to fetch a good price this year.. I cant wait to see what you get with that sucker.
U

THAT fuggin kicks ass badger....your makin me want to relive my youth

Very cool... thanks for sharing, badger. I've never gotten into trapping, but this sure is making it look fun as hell!

That looks pretty cool. I would like to see the catch...and how it worked.

That is a great idea. I have a friend who has muskers in his pond. As soon as he thinks he has shot the all another one shows up. I will tell him about this for sure.

Third check produced a rat. There's only a few in this pond, and I figured it would take a day or two. 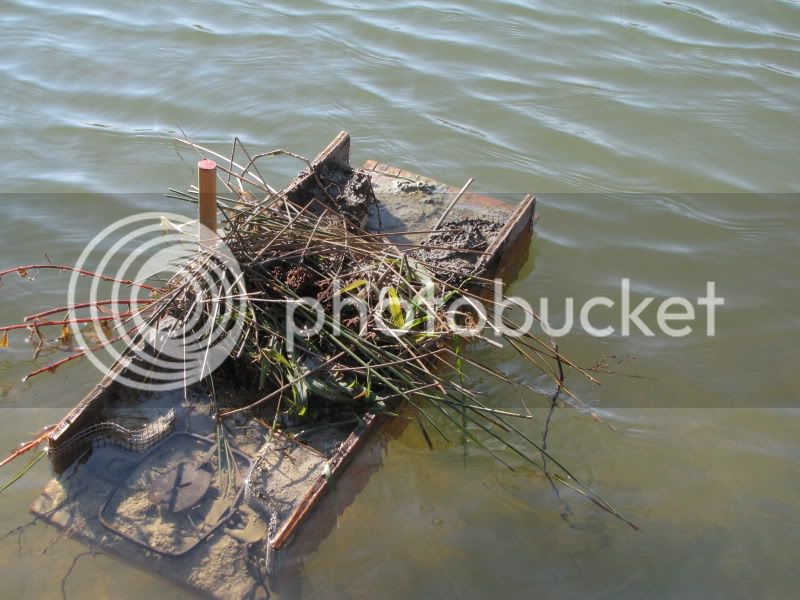 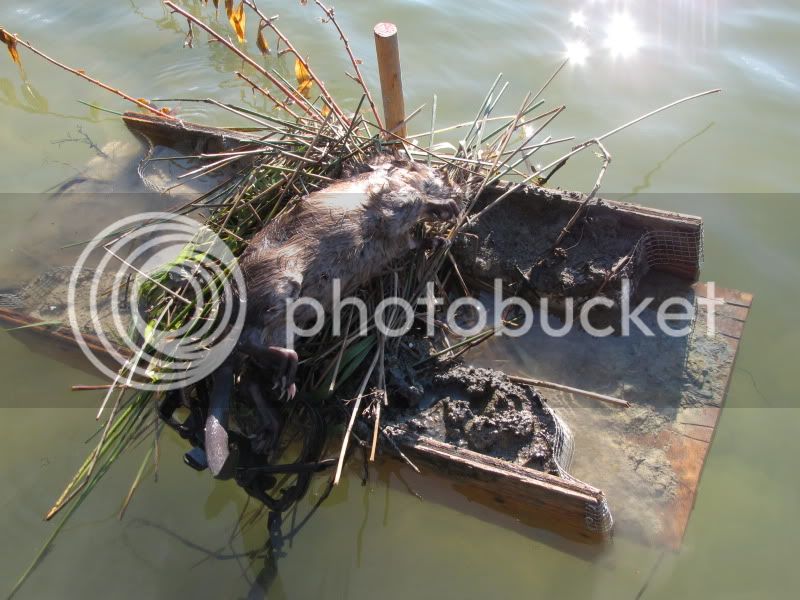 So what happened with the missing trap? Aren't they secured to the wood?

Jeff, I guess I suck at explaining things, lol.

Yes the traps are attached to the bottom of the float with a wood screw and two washers. Once a rat steps into the trap the first thing he'll do is dive back into the water. The weight of those old #2's is more than a rat can pull back to the surface. So when you see you have a missing trap, it usually means a catch is hanging under the float.

Hey if you have beaver on your place, don't pay some one to trap, them, I'll do it for free when beaver season comes in.

This is why I love this site .

I see you tethered it to that long tree/pole you drove into the bottom mud. How long of a tether do you use and does it matter the depth of the water or should you keep it in waste deep or shollower water ?

Yes the traps are attached to the bottom of the float with a wood screw and two washers. Once a rat steps into the trap the first thing he'll do is dive back into the water. The weight of those old #2's is more than a rat can pull back to the surface. So when you see you have a missing trap, it usually means a catch is hanging under the float.

Hey if you have beaver on your place, don't pay some one to trap, them, I'll do it for free when beaver season comes in.
Click to expand...

Ooooooooooooooh, I get it now, thanks for additional information.

CJD and I have a guy that does trapping out on our property, if he does not call us I will let you know right away.

a glass of root beer and two scoops of muskrat

Here is a video I made a couple years ago. It has a big muskrat trap I made. Never did catch anything in it. Only caught 1 muskrat at this location. Shows what I know about muckrats.:smiley_depressive:

If anyone wants to try out my big muskrat trap just let me know. You can come and get it and give it a try.

Hey Steve, These floats were never high producers for me, but I've always managed to catch some rats with them.