well got there at 630 this morning , i was basicly hunting blind cause i didnt have time to scout he place, first light gets there and it finds me propped up against a big beech tree , im left with a description of a few manegment bucks they want takin out and a final word of , if it looks huge shoot it ,and remember no does or button bucks .

so i sit back relax load my gun text a few people and i hear of to my right foot prints coming down the ravine next to me , i start to get excited , first one pops out its a doe, damn it , then 5 more does follow it all with in shooting range , under 40 yards , they meander down the hill and off to my right , then i see a huge outline , this things gotta be well over 200 pounds its just out of my comfort range in a woods , its close to 100 yards , so i sit there and watch , it has its head down coverd by brush most of the time im watching it , then it steps into a clearing and i about shit my pants , it wasnt a buck , it was the biggest doe i have ever seen , this thing should go over 200 pounds field dressed , it looked like a small cow , so i sit back and watch her for awhile till i hear foot steps behind me , so i get all excited again and slowly turn my head

what the fuck 5 more does walking down the hill past me this time they were on my side of the ravine , this makes 12 does with in the first 10 minutes of shooting time and i cant blast a freakin one of them i could have tagged out on does and then some , but its nice seeing deer, so i sit there a few more minutes and i hear more foot steps , im thinking its more does , nope i was wrong it was a squirrel making itself sound like a deer walking , i tell him be glad i dont have my 22 or you would be dinner , he just looks at me funny and walks on down the hill

9 am rolls around and i hear my buddy grunting at a deer to stop it , so i stand up to look at what he is grunting at , i see to outlines in front of him , his grunts scared em and the come lock stock and barrel running at me first ones a spike and the second one was a 3 point they wanted out of the herd , when the see me both slam on the brakes look at me for a second then turn tail and run back down the hill , they are both at about 55 yards broadside lookin back at me , thats all i could handle i let a slug fly the 3 point bucks into the air and goes to take off his feet were thinking faster then his brain cause he nose dived right into the ground , i get another shell in and let another one fly , second shot missed , i stand theyre and watch him run up to the top of the knoll and stand there , he wobbles then beds down , im thinking ok i hit him but maybe its not the best shot , so i sit back and watch him for bout 10 minutes , i cant handle it any longer i start walking down the hill and start up the other knoll , he pops his head up and looks at me but dont run so by now im thinking hes hit , he is suffering a kill shot is in order , so i let another fly , right ove top of his head , what the hell , it was to close for comfort and he gets up and runs down the other side of the knoll , i gt to the top and look down hes behind a tree with just his head sticking out so i go for a head shot , another miss , now im getting pissed cause i know my gun is sighted in better then that so he takes off again and runs into a pine thicket , i figure ill let him bed down and bleed out i dont wanna push him , im seeing blood all over the place , so i figure its a good hit he is just tough as nails, the drive ends and we go to track my deer , we find him just inside the pines he didnt go more then 40 yards past where i last seen him and bed down , i look for my shot , it was right behind the shoulder but just under neath the spine , in a spot i call the dead zone , no major organs hit , but it did enough damage for him to bleed out 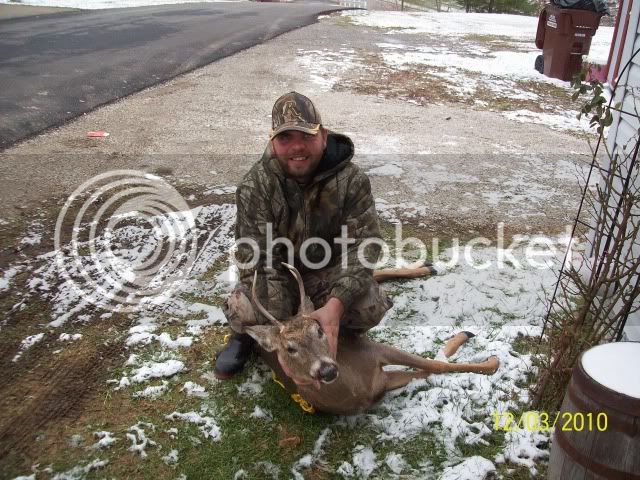 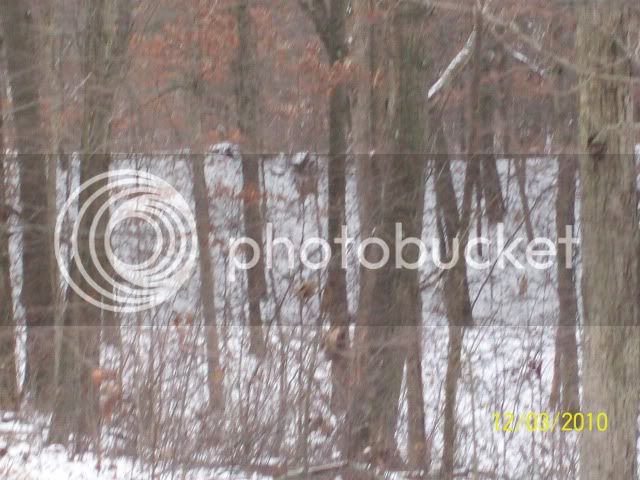 all in all i seen 25 does before 9 am this morning , i got two tags left and gonna hunt my inlaws for some doe deer jerky meat deersz...lol

Seeing deer is always a plus. Killing one all the better! Congrats:smiley_bril:

Sounds like a good morning in the woods. Congrats on gettin' some meat in the freezer! :smiley_cook:

Congratulations. I'm glad to hear that you had success!

I would like to see a video of you chasing that buck lol Congrats buddy! Is he over 20inches!!??
R

I never want to hear anyone say that I look creepy! WTF Mark that picture is going to make some squeel like a pig!


Nice work dude, glad you got to hunt there and kill you a deer.

Can I pull a Coonie here? Where's the blaze orange? you know you're very illegal in the picture. Tsk tsk tsk...

Bahahahha!!! Congrats man... sounds like you had a blast.
U

illegal , i took the pic after i put the missile launcher away
U

Cap't Ernie said:
I never want to hear anyone say that I look creepy! WTF Mark that picture is going to make some squeel like a pig!


Nice work dude, glad you got to hunt there and kill you a deer.
Click to expand...

thats my normal face , you should see my evil face , it makes obama look lik a saint
U

Congrats to your success Uglykat! Some good eatting there. Why aren't you allowed TOO whack does when it sounds like their buck/doe ratio is way out of whack?
U

thats just his rules, he is way overpopulated on does , last head count was over 100 does on 220 acres

Thats crazy! No wonder a spike and 3 pointer are the only bucks you seen that morning.
U

they actually came from the property behind us , that was getting pushed , were trying to talk him into a doe hunt , his yearling does are popping out singles , the older does are popping out doubles and triples , his doe herd def needs thinned out , he has some nice bucks , they just werent on the end of the property we were on
You must log in or register to reply here.
Share:
Facebook Twitter Reddit Pinterest Tumblr WhatsApp Email Share Link