New bridge over the Ohio 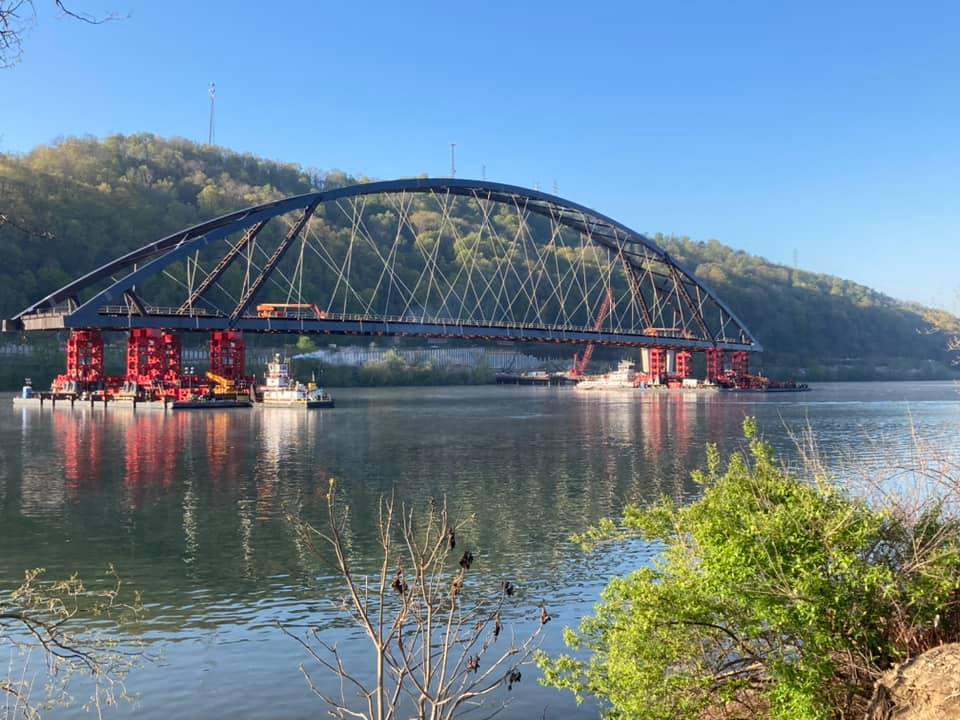 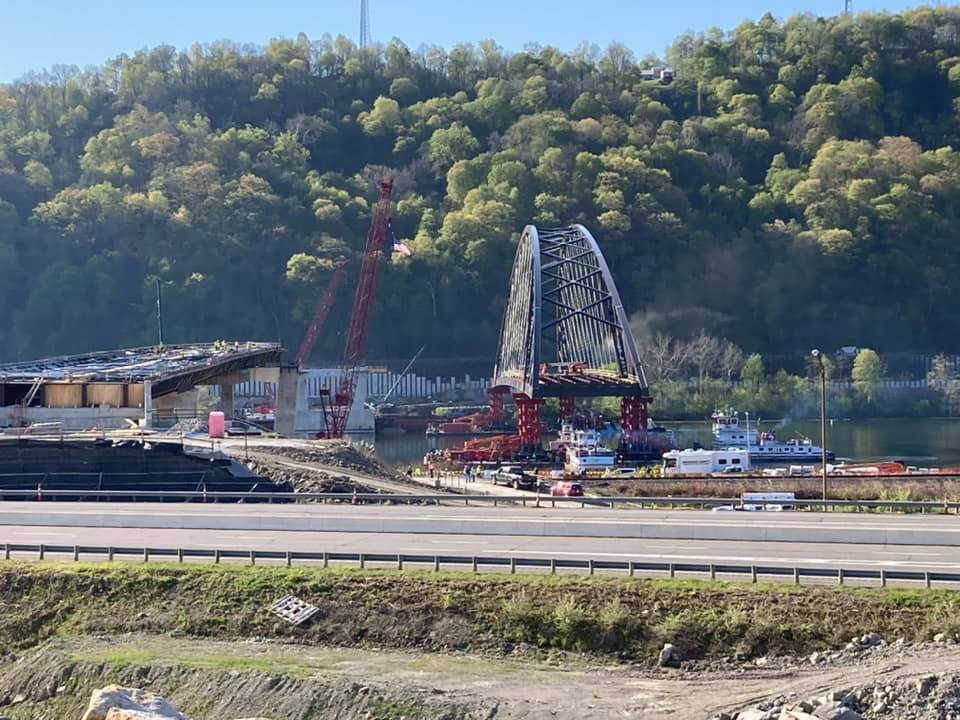 WELLSBURG — A major piece of the new Ohio River bridge — the 830-foot-long main span — is now in place following many hours of planning and work by many.

And the task of moving and lifting the 4,100-ton structure, which was expected to occur over two days, was completed in less than 12 hours.

The day’s operations were a major step in building the bridge, which will extend from state Route 2 about a mile south of Wellsburg to the intersection of Third and Clever streets in Brilliant.

First, six sets of red, interlocking hydraulic jacks were inserted under the span at the Wellsburg assembly yard behind the Smith Oil gas station where it was built.

The jacks had been transported from Louisiana by four tandem barges, which also were used to carry the span about a mile south on the Ohio River.

About two and a half hours later, the span reached an area just south of its future location.

“The tugboats did an absolutely excellent job turning the span,” Mathews said of the watercraft used to position the structure in the river for its next big move.

Mathews noted that each jack on the barge was capable of lifting 5,000 tons.

Together they were used to elevate the span about 80 feet, at a rate of about 6 feet per hour, and onto the bridge’s innermost piers.

That operation was completed in several hours.

Mathews said it was the largest tied arch span to be conveyed in such a way by Flatiron but not the heaviest structure to be lifted by the company using the jacks.

The heaviest was a 5,000-ton section of the San Francisco-Oakland Bay bridge built by Flatiron in 2013.

He said Monday’s good weather prompted the decision to proceed with both phases in one day. Inclement weather had led to them being postponed three times.

Mathews said cool temperatures weren’t a major concern for those planning the big move, but high winds and choppy water were.

“The whole operation is very weather- and river-dependent,” said Mathews, who added, “We’re certainly not going to do anything if it’s not safe.”

He added Flatiron and the West Virginia Department of Transportation had been in contact with the U.S. Coast Guard for some time so arrangements could be made for that area of the river to be closed to other traffic.

Mathews said aid also was provided by the Army Engineer Corps, while the Brooke County Sheriff’s Department deployed its boat to deter curious boaters and other law enforcement agencies aided with traffic control and security along the adjacent highways.

“Our huge thanks go out to everyone involved,” he said, adding that includes engineers who planned the move and the various laborers who built the span and its piers.

Mathews noted there’s still more work to be done. The jacks were slated to be lowered and shipped back Monday night or early today.

And crews will continue to work on other aspects of the bridge, including pouring concrete for the 60-foot-wide deck, which is supported by a framework of epoxy-coated rebar; extending the existing span about 200 feet over state Route 7 to Brilliant; and a half-mile long retaining wall along Route 2.

The wall allows the highway to be expanded toward the river, eliminating the need to excavate the adjacent hillside and lowering the project’s costs.

Though the span isn’t expected to be completed until October or November 2022, its progress on Monday drew interest and excitement from many spectators on both sides of the river.

Many gathered near Wellsburg’s Sixth Street Wharf, the lot of the city’s nearby water plant, along Third Street in Brilliant and other sites to watch the move.

Some said it’s a development they thought they would never see — and one they didn’t want to miss.

Debbie Ulrich of Wellsburg recalled hearing talk of a Wellsburg-Brilliant bridge 60 years ago when her father, the late Hugh Newell, was working as a steelworker in Mingo Junction.

“I wish my dad would have been here to see it,” she said.

Retired news reporter Matz Malone acknowledged the idea of a bridge between the two communities dates back many years before the Veterans Memorial Bridge, the most recent link between Steubenville and Weirton, was completed in 1990.

Malone noted strong proponents for the bridge have included the late Anthony Cipriani Sr., Wellsburg’s mayor from 1981 to 1989; and Sue Simonetti, who died on March 30, in her 12th and final year as the city’s mayor.

“Sue kept the fire going. It’s a shame she can’t be here to see this,” he said.

Linda Edwards of Wellsburg came to the Sixth Street Wharf with her husband, retired dentist Dave Edwards, to view the move.

Asked her opinion of the bridge, she said, “I think it’s fantastic and I think it’s going to be such an economic leader for this area.”

Edwards said she hopes the span will help to attract new industries to the city.

“My dad was mayor here and they were talking about a bridge 60 years ago,” said Jim Bailey, a retired law enforcement officer, as he watched from Brilliant.

“I think it will be a good thing,” he said, adding he envisions making trips to Wellsburg for groceries when the bridge is completed.

Wells Township Trustee Allison Yanssens said the bridge has spurred interest in developing properties near the bridge while many residents welcome another route for their daily commutes to work.

Dennis Boggs of Martins Ferry, who was watching from Third Street, said, “When I was working, I would’ve loved it. It would have saved me a lot of time.”

But the spectacle of the span’s move also drew visitors who anticipated no personal gain from the bridge.

Penny Smith of Tappan Lake said she has followed the bridge’s development with interest.

“I just couldn’t wait to see how they were going to do it,” she said, adding, “This is just so amazing.”

Mark Dunkleman of Cincinnati said he heard about the bridge while doing business in Pittsburgh and had to see it personally.

(Scott can be contacted at wscott@heraldstaronline.com.)

WELLSBURG — A major piece of the new Ohio River bridge — the 830-foot-long main span — is now in place following many hours of planning and work by many. And the task of moving and lifting the 4,100-ton structure, which was expected to occur over two days, was completed in less than 12 hours. […]

My wife will travel that bridge daily on her way to and from work.

Alot of fellas I know are working on that project and send put some cool videos on FB from the barge and banks of the river.
Reactions: finelyshedded, 5Cent and Ohiosam

These engineering marvels always amaze me. Thanks for sharing!
Reactions: finelyshedded and OO2

Hopefully they leave a lot of debris under that bridge

That’ll make for some good fishing...
Reactions: cotty16 and OO2

I’m affiliated with many DOT related bridge projects but no this project. Watching infrastructure projects is cool.
C

That is an example of the America I love
Reactions: GoetsTalon and finelyshedded

J said:
Hopefully they leave a lot of debris under that bridge

That’ll make for some good fishing...
Click to expand...