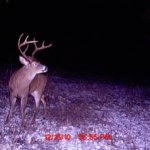 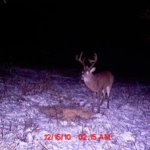 Not sure about the age thing but he's a goodie.

cotty16 said:
Not sure about the age thing but he's a goodie.
Click to expand...

Marcus, are you sure these two pic's are of the same deer? The tell tale sign that they are different is the right main beams. The first pic has the beam going straight out and the 2nd pic shows the beam curling up. Plus something is up with the g-1's, in there positioning and the first one appears to be missing his leftside g-1. IMO Just saying, do you see what I'm seeing? I also believe both are shooters and are around 3.5 yrs of age and prolly won't get much better as far as antler growth. Next year will tell you alot if they make it. IMO
Last edited: Dec 20, 2010

FS- Man I was wondering the same thing!!! I thought the similarities were too close for them to be different bucks but it heck they may be twins...I am going to check all my pics and try to make some more comparisons...
You must log in or register to reply here.
Share:
Facebook Twitter Reddit Pinterest Tumblr WhatsApp Email Share Link