Well to start things off it was a Monday, but not like any Monday I have had in a very long time. There are many blessings to share with my TOO buddies.

To start it off work was actually easy today. Wasn't swamped and actually got off a little early so that I could hit the woods. The blessings really started while on my last call. I had worked at this place in the past and it is another dream residence of mine. Needless to say I was not happy with the reason I was there. Instead of getting someones heat on I was dealing with a clogged toilet had overflowed onto the bathroom floor poo and all and was soaking into the carpet. Well once I was dealing with all the crap and letting the customer know it was all good to go. I asked a very simple question and it went something like this. "I have to ask because I know the answer is NO until I ask... Do you alow anyone to archery hunt your property?" I was ecstatic to hear the response YES!!!!!!!! This property is just a couple miles as the crow flies from another property that I have been hunting this season. It is sporting 72 1/2 acres and is mostly wooded, and is where there is a lot of deer a definitely has big boys traveling it. WOO HOO!!!! Win #1

So I leave this and head to a stand that I haven't sat in for nearly an month. Got into the setup about 3:45. It was very calm and a light snow falling. Just a gorgeous afternoon to be in a stand. As I was sitting there I was texting with the neighbor to find out what kind of movement has been going on since he is a big time hunter and keeps a close eye on all the activity in the area. He let me know that they had been showing up at his corn right around 5:30 to 6 every night. He told me they had been coming from my direction too. This got me very excited as I was sure I would see deer because of the tracks in the area. At about 5 I spotted my first deer. She was not coming from the direction I was suspecting though. She was about 80 yards away in the woods and moving east. I was expecting to catch the deer coming form the east not heading to the east. I had the tree between her and I and she still somehow picked me off at 80 yds. She stood there for probably 10-15 minutes stomping the ground and moving around trying to get a better angle to figure out what I was. Eventually she moved on to the east. All of a sudden there where 8 to 10 more deer moving in the same direction, and weren't wasting any time getting through there. I thought if nothing else I got some good sightings. Then I look to the east and catch a glimpse of some deer moving into the field. Here they all circled back around to the east corner of the field I was sitting on the edge of and was coming back my way. A nice sized doe and a buck where the first two. I got drawn as they where still suspicious of me. At this point in the game I must say I was strictly hunting meat. What ever had the biggest body and offered a shot was getting it. The buck presented me with a 31 yard quartering away shot. The arrow hit its mark and the deer scattered. I was able to come back with my bro in law a couple hours later track him and get him drug out. WOO HOO!!!!! WIN #2 more meat for the freezer. 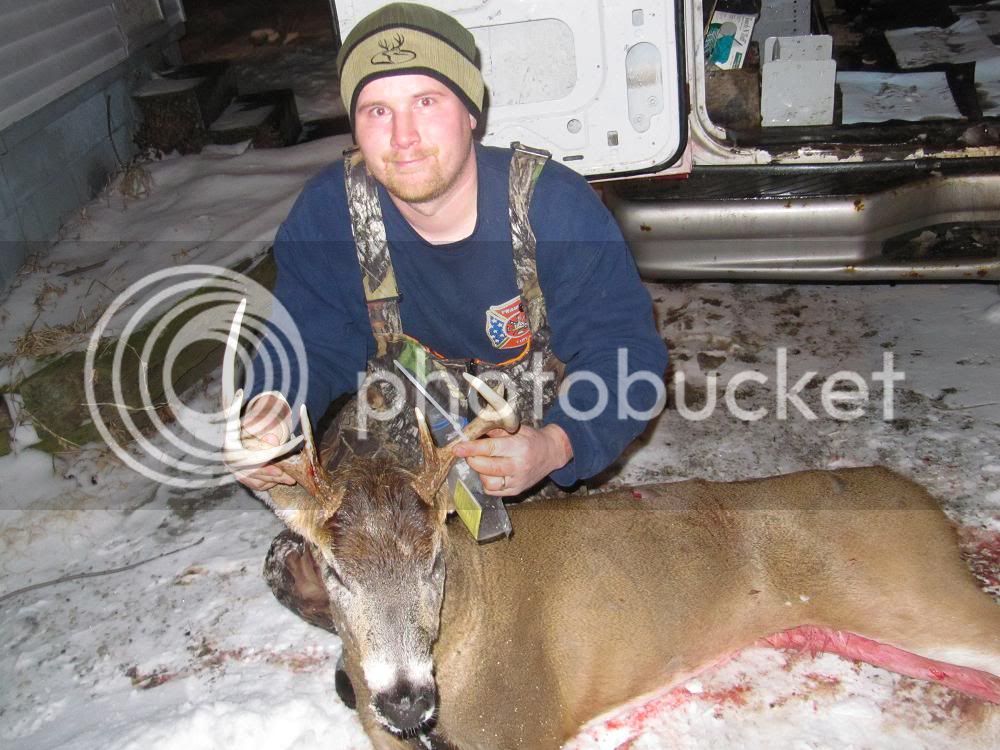 He is not the biggest deer by any means but he has a decent body on him and I have hunted hard and long. He is a trophy in my eyes none the less. Not because of the bone but because of not giving up and persisting through a very tough season.

This also broke a bad streak for this property. I had just acquired this property in early Nov. In 15 years of hunting deer I had never shot a deer and not found it. This happened for the first time this year at this property. Not only did it happen once but twice in 3 days. So harvesting this deer on this property has definitely gotten a monkey off my back that has been weighing heavily on me since Nov. WOO HOO!!!! WIN #3

So I get home and it just keeps coming. I open my email and here the neighbor I was texting with sent me some pictures of a 130 to 140 class buck that has survived and only looks to be a young deer. I will post pics on another thread and start some guessing on age. WOO HOO!!! WIN #4

Also the wifes grandma stop by. She brought a late Christmas to our house. $200 dollars in groceries. A kinnect for the Xbox. Which was for the family and not just the kids, and then She got me a Moultrie D-50 IR. I do not know much about the Moultrie but would like for any of you guys that have some experience with them to chime in and let me know whether I should keep it or trade it in for a truth 35. WOO HOO!!!! WIN #5

Just glad I got guys like you to be able to share all the highs and lows with. :smiley_coolpeace:
R

You are a lucky bastard on gaining another property in that direction and I am going to have to become an HVAC/Plummer, not a lawyer! Congrats on keeping up that new relationship as well!

I am SO PUMPED about that whole post...I am so glad that you had a great day and that brightens my day as well.

CONGRATS Steve, you deserve that! All that hard work paid off and you stuck it out with the cold TOO!

OLE HELL YEAH from me TOO! Awesome story and great hunt, Steve! Congrats on all five of your win/wins!!! I love my moultries but don't know much about the one you got. One of mine has great battery life(5.0 IR) the other not so good but alright(5.0flash) I've only got a few more ops TOO get my deer but knowing one of the TOO family got theirs makes my year just the same! Good Job!

Congrats and way to get in done!

Sounds like a fantastic day. Way to stick with it.

Congratulations on toughing it out and filling the tag. As far as the Moultrie cam, I would keep it......they are fairly good cameras!

Trophy indeed! Late season is a bitch and you got it done. Way to go! And congrats on all the other good news as well.

Steve, Steve, Steve..... Holy crap (pun intended) what a great day!!! :smiley_clap: You've got to still be riding high after all of the events from yesterday. Congrats on an absolute trophy of a deer. You definitely hunted hard, stuck with it, and reaped the rewards of all your efforts!! Great pics & great story to match. Big time congrats buddy!!

Way to go, Steve! Hard work pays off in every area of life...hunting ain't no exception. You are the man. Great job on a great deer. And congrats on the awesome day all around yesterday!

Fuggin' A right buddy!!! That's awesome dude! Congrats!!! you definitely earned that one!!!

Sittin in a treestand in that weather you must be one tough SOB or crazy as hell!

Outstanding story! What a great day - glad you shared, made mine better.
Deer shot on Monday are also supposed to be more tender....:smiley_clap:

Dang brother, what a day! Congrats on everything! Watch out that kinect is addicting... and it'll kick your ass if you play it long enough. lmao

Congrats on all the great news and a trophy to boot.

nice work hoyt way to stick with it !

Congrats Steve....great story. The only thing that's missing is a picture of that deer stuffed in your trunk!lollol

Congrats Steve. I'm glad it all worked out for you. I know you had a pretty rough go at it this year with the 2 none recovered deer and what that can do to a hunters head. I'm glad you stuck with it and closed the deal and got that monkey off your back this year. I suspect next season will find you starting off on the high note again and give you the steam to do it all over again .