Pulled pork is one of the easiest things to cook in a smoker and one of my favorites.

Wild or domestic pig can be used. Yesterday I smoked an 8# domestic pork shoulder that was rubbed down with dry seasoning the night before. There's plenty of shelf brands of rub to choose from or you can make up your own as I do most times. This one has a brown sugar base with lots of other goodies added.

Smoking a shoulder to the point of "pulling" vs "slicing" is not a quick process. Yesterdays pork took almost 13 hours at cooker temps ranging from 200 to 250 to reach an internal meat temp over 190. Strong cold winds prolonged my smoking time.

I took my meat out of the fridge a few hours before I was ready to cook so it could reach room temps. Normally I'll go straight to the smoker with the meat, but yesterday I started it in the house oven due to basement flooding issues. By 6:00 a.m. it was in the oven, by 9:30 it was in the smoker. I like to cook it in a foiled covered pan for about half of the cooking time to insure I'm gathering juices to add to my barbecue sauce later. Sometimes I take it out and place it on the grates, sometimes I just leave it in the pan, I don't think it much matters. You are going to get good smoke flavor no matter which way you do it. I also would like to add that I have been using mostly maple wood this year.

Once the meat has reached 190 I'll bring it in and let it rest on the counter covered with foil and then a towel. The meat will keep cooking and gain another 5 to 10 degrees. During this time I'll mix up the juice from the pan with some vinegar and some barbecue sauce. Original Open Pit, or Lil Jug works good for me. I'll try any sauce as long as it doesn't have liquid smoke added. (can't stand the flavor of liquid smoke) I do prefer tomato based sauces.

Last thing I'll add is make sure to have plenty of cold beer on hand!

Butt all rubbed down! 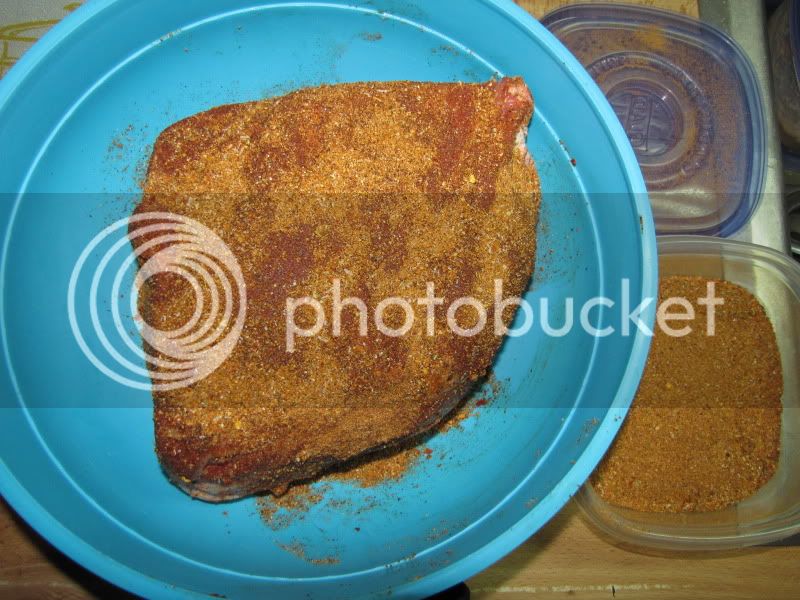 I was getting close to 170 with the meat temps here 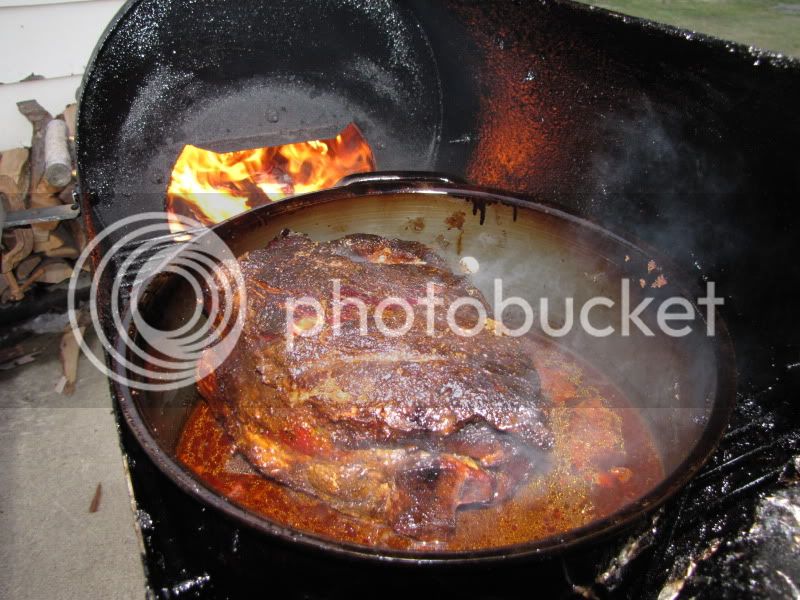 190 and getting ready to rest 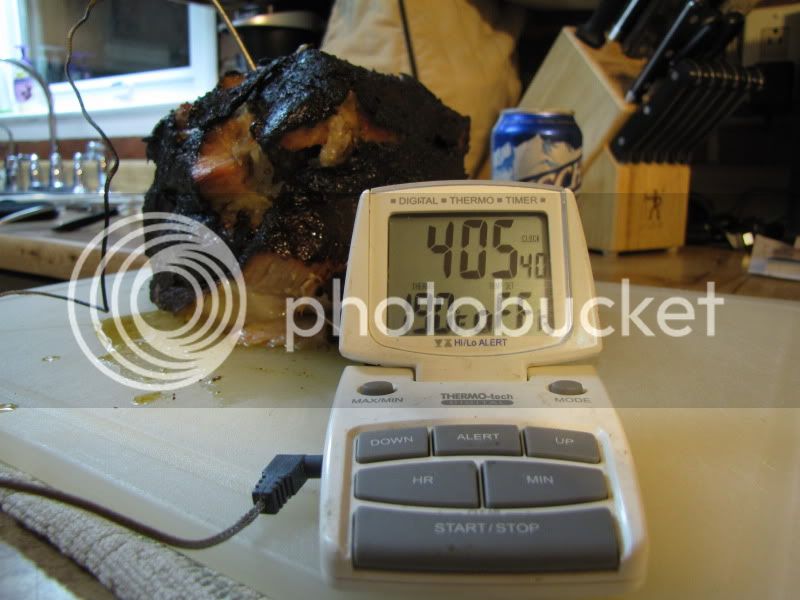 Two forks is all you need to pull the meat 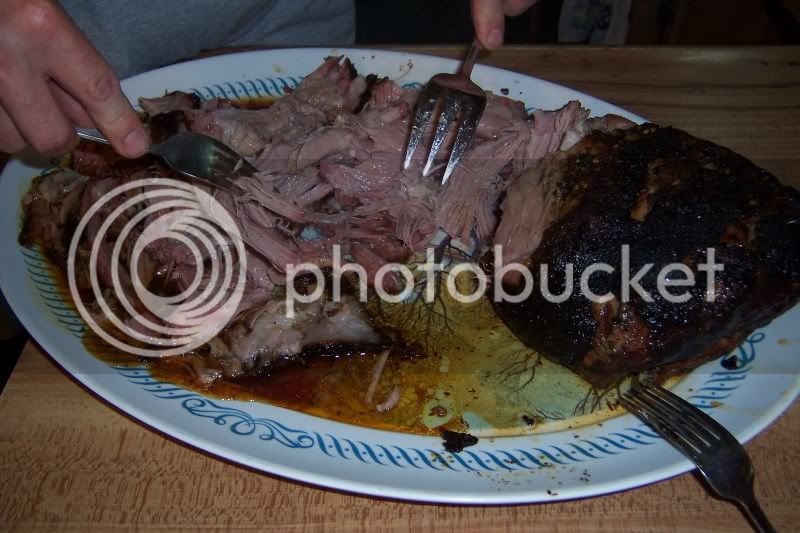 Platter full of goodnes! No is needed at this point unless you want it. 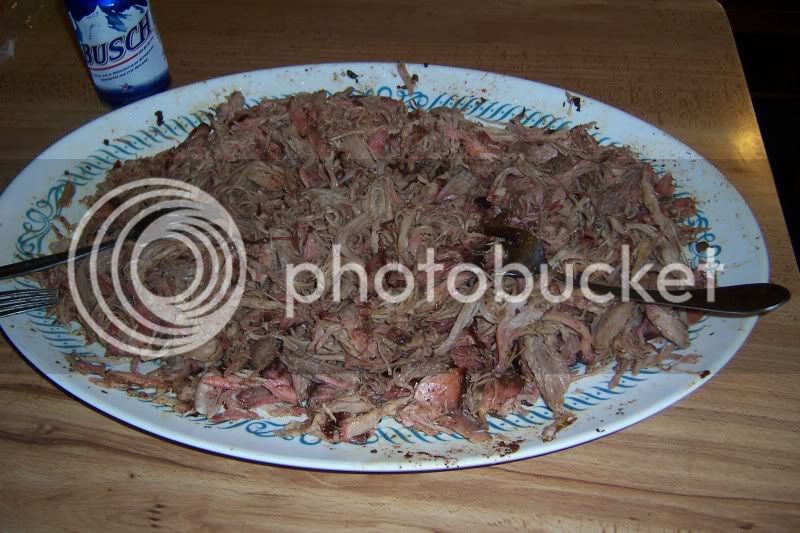 Half was done in sauce, half was served without. 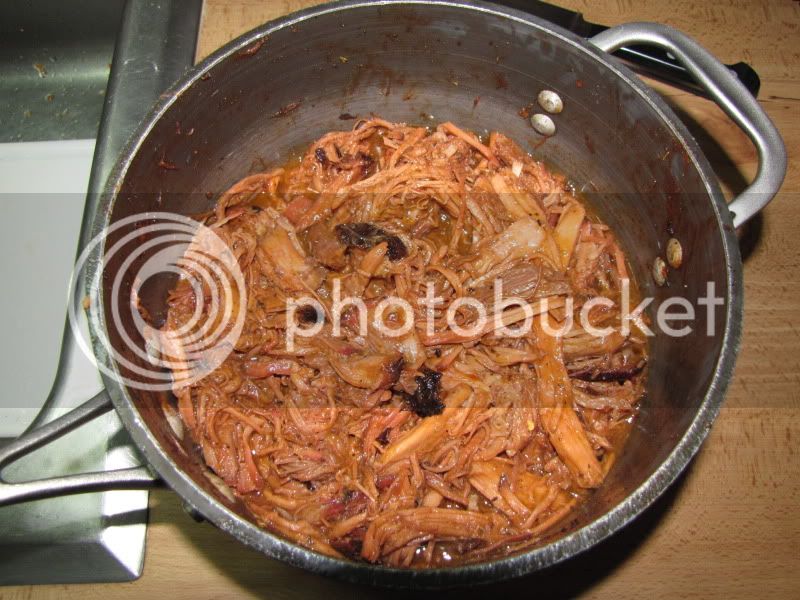 (as a side note, a few pics were taken from an old thread of mine as I didn't take pics of the pulling process yesterday)
Last edited: Mar 1, 2011

Will you marry me?

cotty16 said:
Will you marry me?
Click to expand...

Is your wife part of the deal? :smiley_bril:

cotty16 said:
Will you marry me?
Click to expand...


Cotty, wouldn't that be considered bigomy?????

Lmao! She agreed to be MY mistress in exchange for a good cook.
I get the best if both worlds. Good sex with her, good food from Badger.
Both ends are happy.

cotty16 said:
Lmao! She agreed to be MY mistress in exchange for a good cook.
I get the best if both worlds. Good sex with her, good food from Badger.
Both ends are happy.
Click to expand...

Make sure you have my bar/man room fixed up before I get there! :smiley_adfundum:

Nice looking pork there Dale. Say, I just finished your 12 pack of tomato wine. Come and get it.
You and your new wife Cotty can get sloshed in your new man room in Wintersville.

Buckmaster said:
Nice looking pork there Dale. Say, I just finished your 12 pack of tomato wine. Come and get it.
You and your new wife Cotty can get sloshed in your new man room in Wintersville.
Click to expand...

Trying to work out a day to get my buddy out to your place to look at those steps. I might have to do it solo.

badger said:
Did you say twelve pack?????
Click to expand...

If you don't like it you can use it as weed killer, paint thinner, or just get plain tomato shit faced.

It's gotta little nip on the front side, smooth in the middle, and an aftertaste.