I think about squirrel hunting a lot. Mostly when I'm not doing it, but I think about it while I'm out there with the dogs, too. The happiness hunting with dogs brings me is hard to articulate. Never once have I had a dreadful thought about squirrel hunting until now. I've been hobbling around for two months on a hip that is jacked up, and I have no real diagnosis of what the problem is so far. I'm treating it every single day with exercises, stretching, meds, heat, ice, rest, and now I've got a support band to wear, which seems to help a noticeable amount. Enough to keep me moving, albeit slower than usual. Still, I've given up a substantial amount of deer hunting time to sit home and rest my ass on a heating pad trying recuperate enough to hunt the next day. I think it's getting better, but excruciatingly slowly. I'm afraid that one long walk with the dogs might be one too many. Besides my broken down ass, I don't know how much Lefty will be able to hunt now. He'll go as much as he wants, and I won't be pushing him. He's entitled to come along for the ride now. Slick will do the heavy lifting.

Rifle dead nutz on, collars charged, shears and knife popping hairs. Dogs getting antsy. I'll have to deer hunt tomorrow with a much desirable and seldom seen this season north wind. I have a sliver of hope for a chance at a buck I care to shoot. West winds on Tuesday are no good for my deer hunting, so we chase rats on Tuesday. I'm taking this season as it comes. No grandiose hopes for this season, other than that we can hunt as much as we want without suffering any more than usual.
Reactions: finelyshedded, Big_Holla, Boarhead and 11 others

Hate to hear about the bum hip, Jamie. Looking forward to the updates on your adventures and getting out with you and the pups again this year!
Reactions: Jamie

Best of luck in the deer woods. The squirrel hunting adventures never disappoint. Hope the hip heals up and allows some enjoyable trips.
Reactions: Jamie

Miss reading about all your hunting adventures and hope you fully get back to 100% real soon.

I went to see the Chiropractor one more time yesterday to make sure my SI joint is where it is supposed to be. That is the physical manifestation of the problem, but the actual problem is that this is another repetitive use injury. Took years for this to come to fruition, and now the undesirable muscle memory that has occurred is not eager to go back to normal. I left the office in pain, but a different kind than I was in when I entered. It seems like that adjustment really helped. Hip moving somewhat normal. Muscles sore and still have some nerve pinching, but moving more freely than I have in weeks. A nice walk around the woods was not too uncomfortable. Getting stiff now, but that is to be expected.

I went to bed seriously considering deer hunting again this morning since I had a very good morning hunt yesterday, but I just didn't feel like sitting in a tree stand again. Went back to bed for a couple of hours and went squirrel hunting like I was originally planning.

Dogs got off to a fast start, and Lefty had one in about one minute after I sent them off. The old man had his sassy pants on today, lol. I quickly hobbled over there to see a squirrel up high in a pretty tall and skinny tree. Unfortunately, when I got my rifle up, both dogs ran off the tree barking at me. While I was busy yelling and herding them back to the tree, the squirrel vanished never to be seen again. If this wasn't the first squirrel on the first drop of the season, I'd have been seriously pissed at my sloppy ass tree dogs. I shrugged it off and sent them off to find another. I was still pissed at my sloppy ass tree dogs, btw.

I just didn't take it out on them. They get pretty excited the first time out, so they get a little latitude on the first hunt of the season. It didn't take Slick long to find another one. I finally caught up with them and found the squirrel. Dogs only ran off the tree twice before I convinced them to stay long enough to put a bullet in rats head. Lefty took off and treed a good ways out, so off I went again. Slick joined him before I got there, but I took a look from a about 100 yards out with binos, and saw the squirrel was there, so I got close enough to shoot, and, of course, the squirrel had hidden from me. Slick bounced off the tree a couple of times, but Lefty stayed on his squirrel like he knew what he was doing. I finally found the squirrel, but only had about 1/3 of the top of his head to hit, which I did by some miracle. Lefty was even treating my dead squirrels with respect today. Two in the bag, and off we go. Lefty got on one in a group of large Cottonwoods. Both dogs were really hot on this tree, so I looked around for a good while trying to locate this one. I never did find it, but I'm sure it was there somewhere. After a short walk, Slick got on one that turned out to be a big leaf nest. He didn't go 100 yards from that den to the next squirrel, and he had one this time. I had to do some maneuvering to get a clear shot through a bunch of small twigs and branches The dogs stayed on the tree, and the squirrel didn't move a muscle the whole time. I finally found a clear shot at his eye, and put a bullet in it. We had made a big loop and were pretty well back to the truck, so I put up the dogs and decided to call it a day while I was skinning our squirrels. Hip held up pretty well, so I'm not pushing it.

Shooter and dogs off to a pretty good start this season. three head shots, two of them pretty damn good ones. Both dogs found their grooves in record time. We were only in the woods for about an hour. Saw 4 killed three. Short and sweet one to kick off the season. 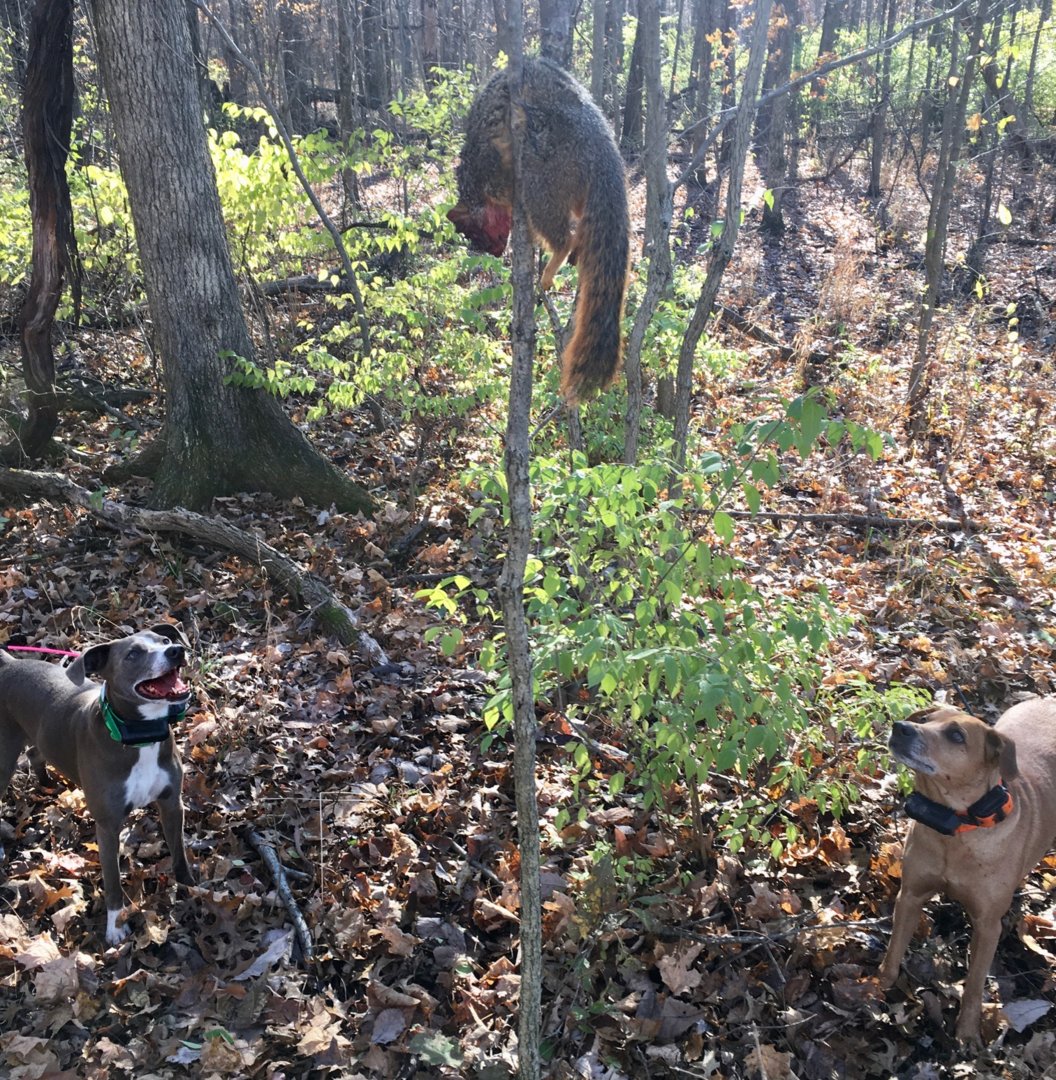 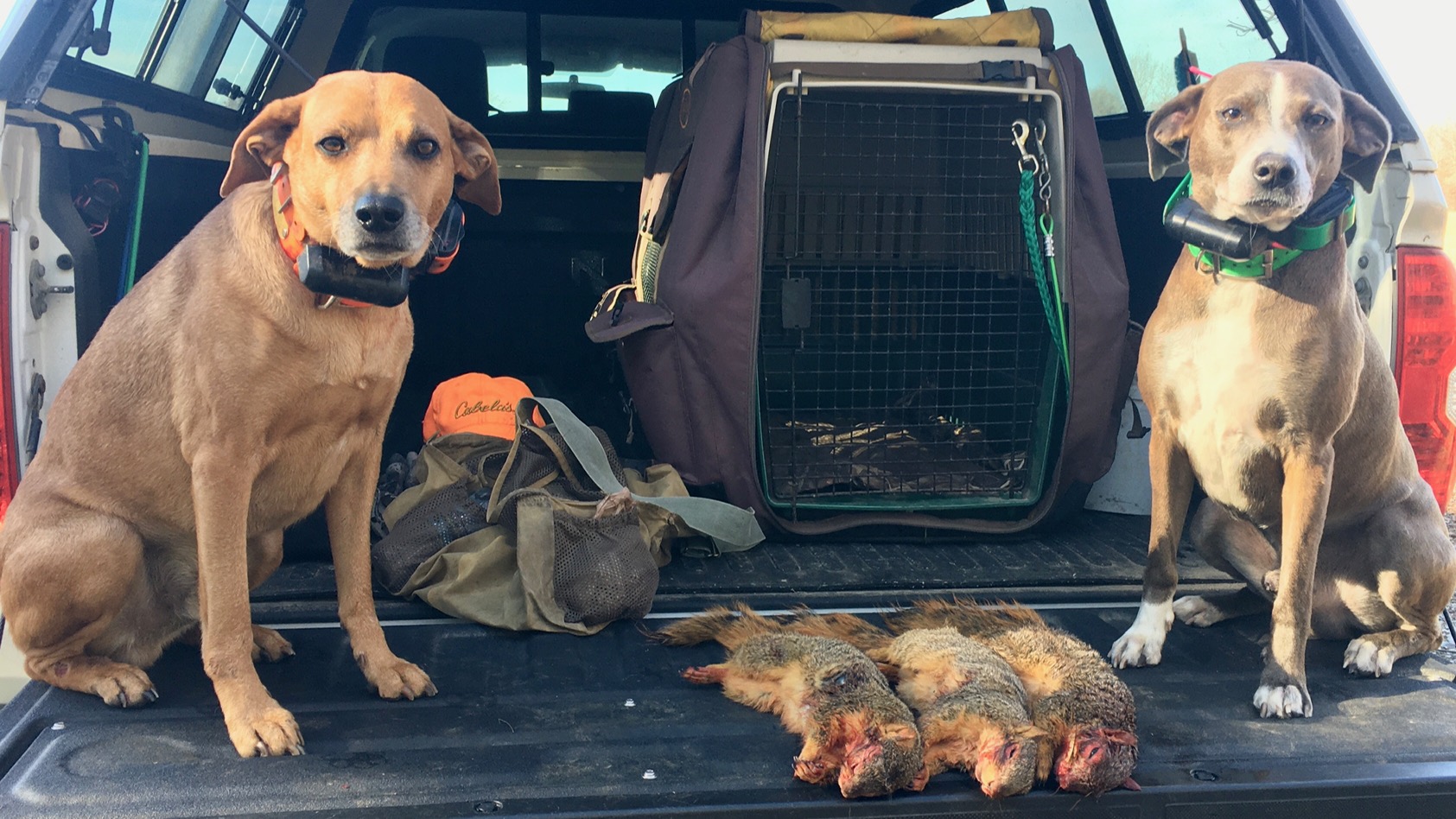 My man Lefty. I never lost a bit of faith in him. Happy to see him still giving lessons to Slick.

He didn't exactly put on a clinic today, but he is hunting like he used to back in the day. In the before Slick time. I mean, he is actually hunting again most of the time now that his terminal case of chapped ass has cleared up. Makes me very happy. I'm a lucky SOB to have these two.
Reactions: Boarhead, Isaacorps and brock ratcliff

Alright lefty! (Slick also lol) Great to read about some squirrels as I'm getting a little frustrated with the deer hunting. Good to hear the hip held up!
Reactions: Jamie

It was great catching up on your tree rat pursuits Jamie! Hope your hip gets to feeling better.
Reactions: Archertl, Geezer II and Jamie
G

Good luck with the hip Jamie hope your on the mend
Reactions: Jamie

What are the rough numbers between male and female squirrels you kill? Seems like 95% of the time they have balls. Seems weird to me to have so many squirrels around and most are male.

Don't tell me... you want pics of squirrel nuts now?!

. 3 of them if my memory serves me correct.
Reactions: finelyshedded

But what if said squirrels identified as having nuts? Would those pics qualify as well?

I verified, 2 males and 1 female in the pic. Lol

All taste the same in some gravy
Reactions: giles

I see my publicist has been busy forwarding pics again.

Incorrect. all three of those were male. the one was a juvenile, young of the year, probably from the summer litter. his nuts haven't dropped yet (no pun intended). I would think that the sac master would have recognized that easily.

I used to try and keep track, however loosely. all said and done, it's roughly 50/50

Therre is a thread for that (and my avatar). I don't have time or the will to keep it updated. David will have to feed his fetish elsewhere.