The Saga of Bob Tom the Turkey.

As the sun rose without a gobble there we were; grinding it out on the same property I shot my bird on a week prior. Prior to the season, there were about four or five toms on this property. They were still here as evident by some close calls the week and weekend prior.

There was one bird however that was always vocal and even gobbled on the ground a lot in the mornings. last weekend we heard him and dashed off to the far end of the property to locate him, unfortunately, we ran out of the ground as he was well across the property line. As we stood at the property line we pulled up google maps and to our surprise there was a house set back off the road in that direction. We listened to this bird and came to the conclusion that he was leaving the roost and heading right for these people backyard. They must have a bird feeder that he likes to frequent as no amount if calling would turn that bird. We cracked jokes about how they probably sit at the breakfast nook drinking coffee and watching the turkey they named Bob Tom feed and strut in the landscaping. After that hunt, we drove around to the road that house was on and sure enough there was Bob Tom not 30 yards from the side of the house in a cut bean field.

Dawn this morning found us set up in a field well out of hearing distance from Bob Tom. Deeks out, all dressed up and not a gobble to show for another 4:30 wakeup. The only amusement was a mouthy hen that we tried to call in hoping she had a beard so we could legally fire a shit in frustration at this wretched species of fowl. Lucky for her she didn't. She wandered off and I retreated into the woods to do the two things I'm sure we all do on slow days, look for mushrooms and practice the art of concealment using native vegetation. 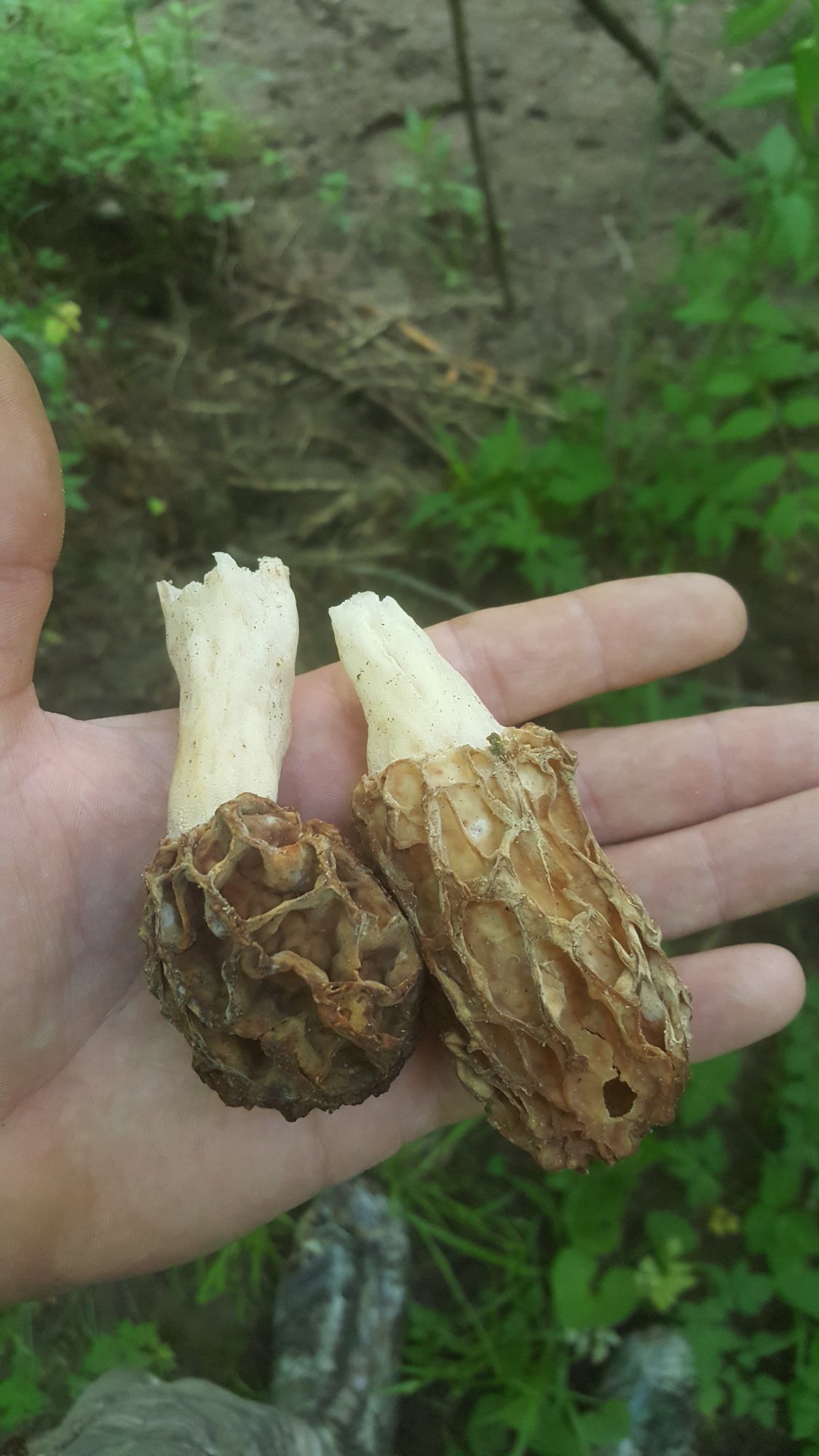 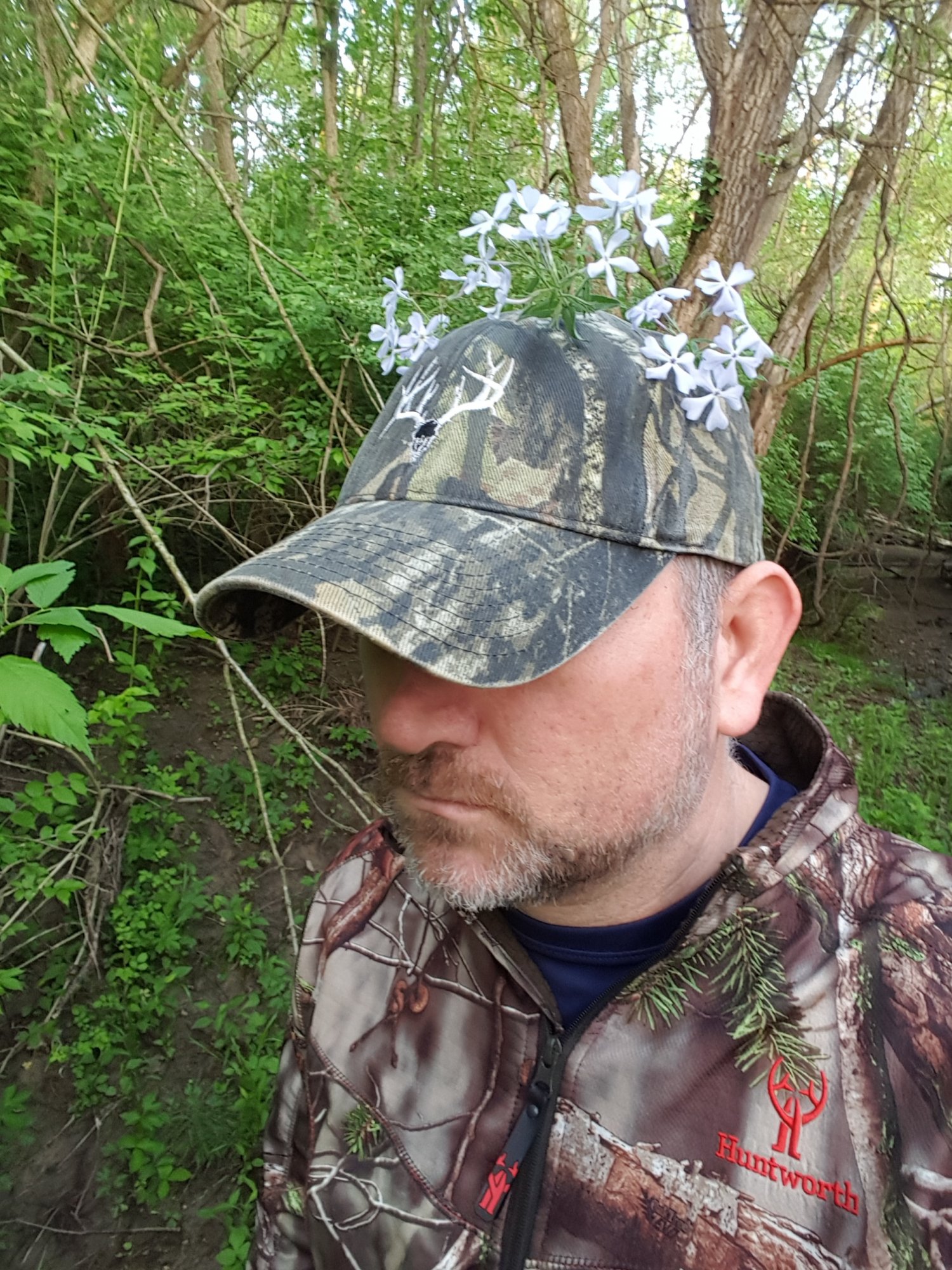 I get a text from Alex expecting it to say let's pack it up. I would like to say I was surprised at the text but I was hardly shocked as such things are a regular occurrence on days like today. 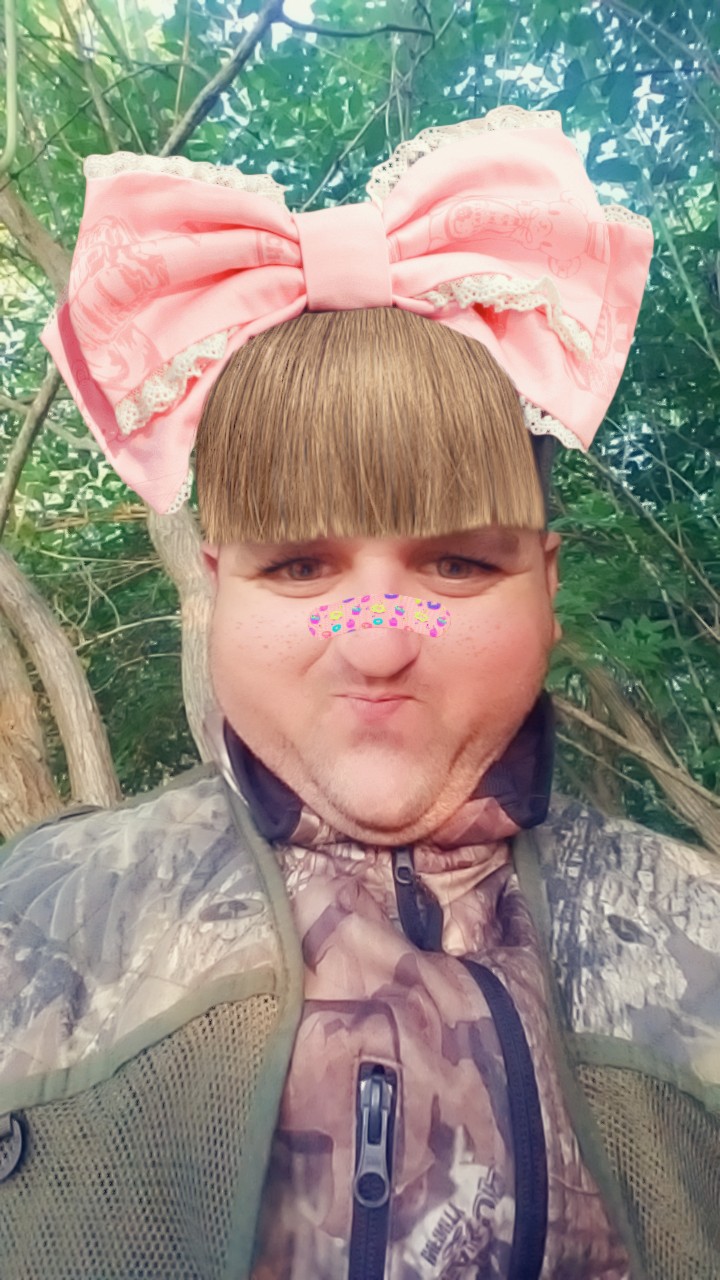 I returned to the field and we decided to do the walk of shame. We've all done it. The one where you walk the whole property blind calling secluded corners, hidden meadows, and peering across the property line into Ag fields that you can't hunt hoping to get a response or catch a glimpse of a fan.

As we approached the end of the property around 7:30 we could hear ole Bob Tom doing his thing on the neighboring parcel. The calls like always went unanswered, Bob Tom gobbled when he wanted, not when you called. Our huntable property bordered his on the back and the side so we decided to slip to his side and try to call him out of his field, through 150 yards of woods, and to the bottom field. No luck, Bob Tom was an oak and wouldn't budge. We decided to slip up the hill to the edge of the property and see what ole Bob Tom was up to. We knew we couldn't shoot him in the field as we didn't have permission but maybe, just maybe we could call him into the thick woods to our side of the line and blow his waddles off.

We snuck through the woods quiet as could be, we neared the field I peered through every hole in the brush that would give me a peek at the field no matter how small an area it may be. I slowly rounded a Honeysuckle bush 30 yards from the edge and there was a big red head 15 yards away in the woods standing tall. We saw each other about the same time and he did that back and forth head bob and was gone. In retrospect, Alex should have gone first as he was the shooter. Oh well. As we stood their heads hung low, cussing the circumstances and kicking rocks like scolded school children there came a gobble in the bottom field. NO WAY! This pea-brained bird busted out and is now in the bottom field gobbling.

We slipped back down the hill through the woods to the lower field and cautiously peered left and right in the field ever so slowly. Sure enough there he was, strutting on a small rise 150 yards down the field! We wasted no time getting set and opening up with calls. At first, it was hard to drag a gobble out of this bird. I believe we went through every call in our possession.

He responded best to a Haint Gobble call that Alex had. I wasn't sure however if he was responding or shock gobbling to the gobble call however. For 45 minutes we worked this bird, shut up on him, and tried every striker / call combo we had. Nothing would budge this Tom from his rise in the field. He would strut, do figure eights, gobble alone, and even bred the ground a few times. Yep, you read that right, bred the ground, full on tail flapping dirt humper. At one point I crawled out to the edge of the grass and stuck a hen decoy out just in the edge of the freshly tilled ground. I even held the stake and moved it around. Feeding, standing up, turning left and right. Laying on my belly holding that decoy and moving it around I started to feel like Wiley Coyote holding an arrow-shaped sign that read "bird seed" while trying to trick the roadrunner.

I snuck back and went through the calls again. He seemed to like the Sasquatch Custom Glass pot call the best over the Zink, Night & Hale, or promos, but only clucks and Purrs. I told Alex to hold tight and don't call and I was going to try to slip away to see if he doesn't follow. I worked my way about 50 yards down a dry creek bed calling to him. After a bit, I went back and Alex signaled that he hadn't moved. I decided to go further and try again. As I got about 60 yards away I could tell he sounded closer. I kept going another 40 yards or so and decided to slip up to the edge of the field and see just how far he moved. As I laid flat in the grass and peered around a bush I could see the bird had moved about 75 yards and was slowly strutting his way to me. By now he was probably 50 yards from Alex but the angle Alex had to set up in only gave him maybe a 30 yard shot down the field edge.

He's working, don't over call, just string him along, be patient. Wait. Wait. Ok, he stopped. , now some soft purrs. He's moving again. Man, he's got to be close, just let him come, Alex, don't push the shot. I see a stream of feathers get blown off the bird before I hear the shot, BOOM! The bird's neck flies back and he does the backflip pinwheel, he hits the ground and flies into the woods, I can hear him flopping and think he's down. Alex is already in the field. I see the bird run back out in the field not 10 yards in front of Alex and BOOM he gets dusted like a kicked up rabbit. I just put my hands on my head like "did that really just happen! We actually killed that bird!!"

As we walked down the edge of the field victorious a really crappy sounding owl started hooting through the woods in the direction of the house about 300 yards away. I just shook my head and mumbled "Sorry buddy. Bob Tom is gone, another victim of the turkey snatchers". 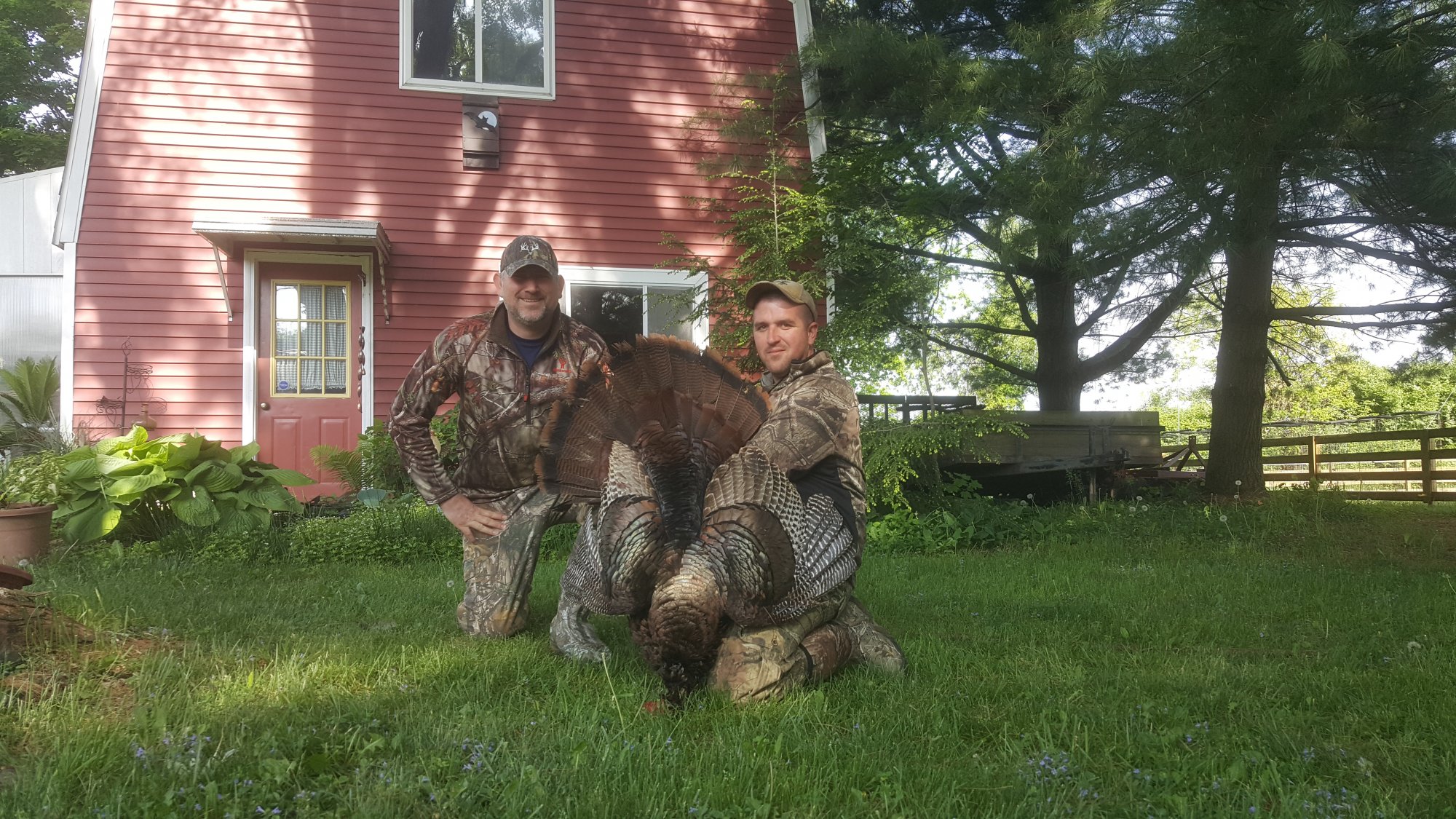 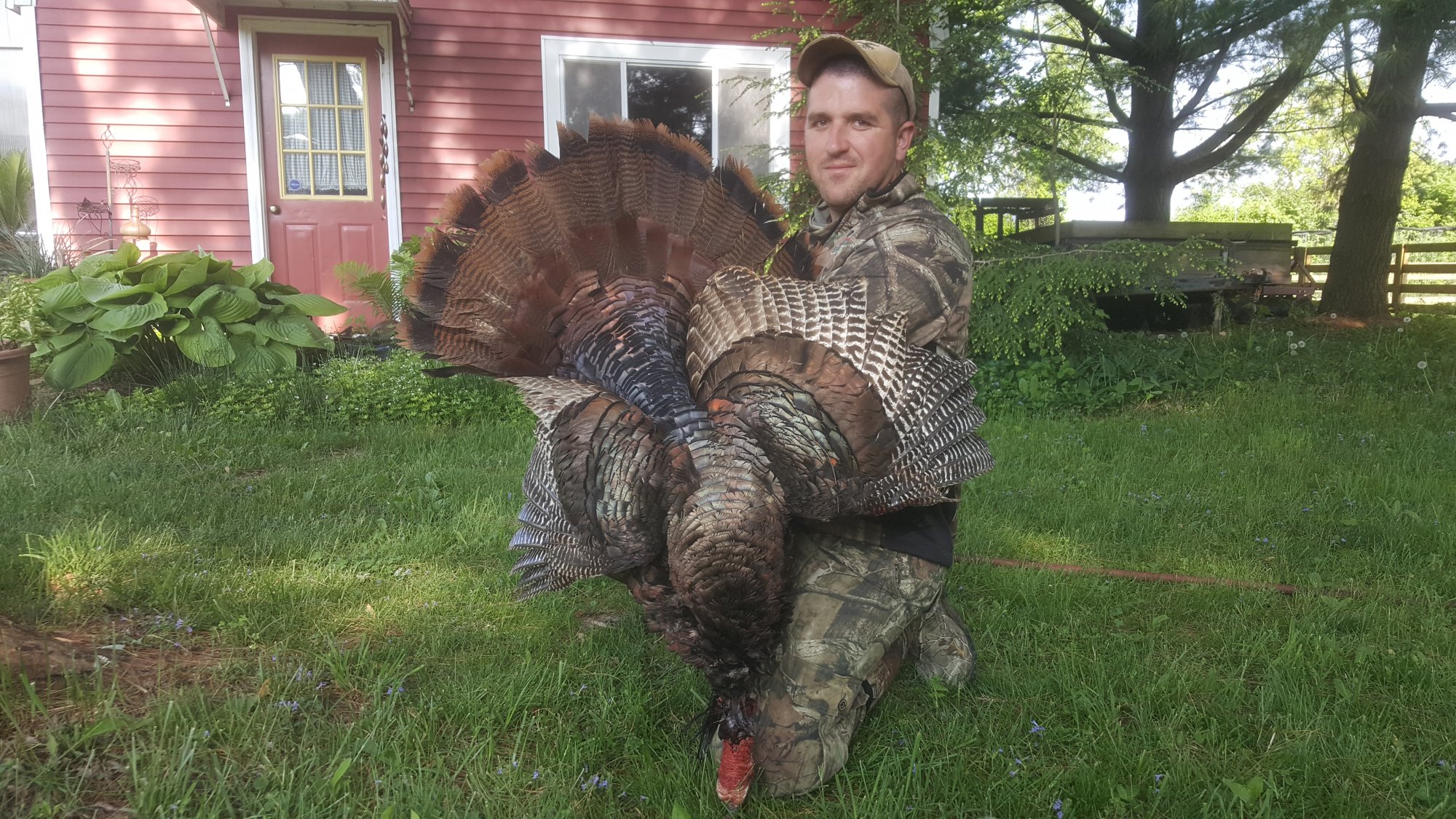 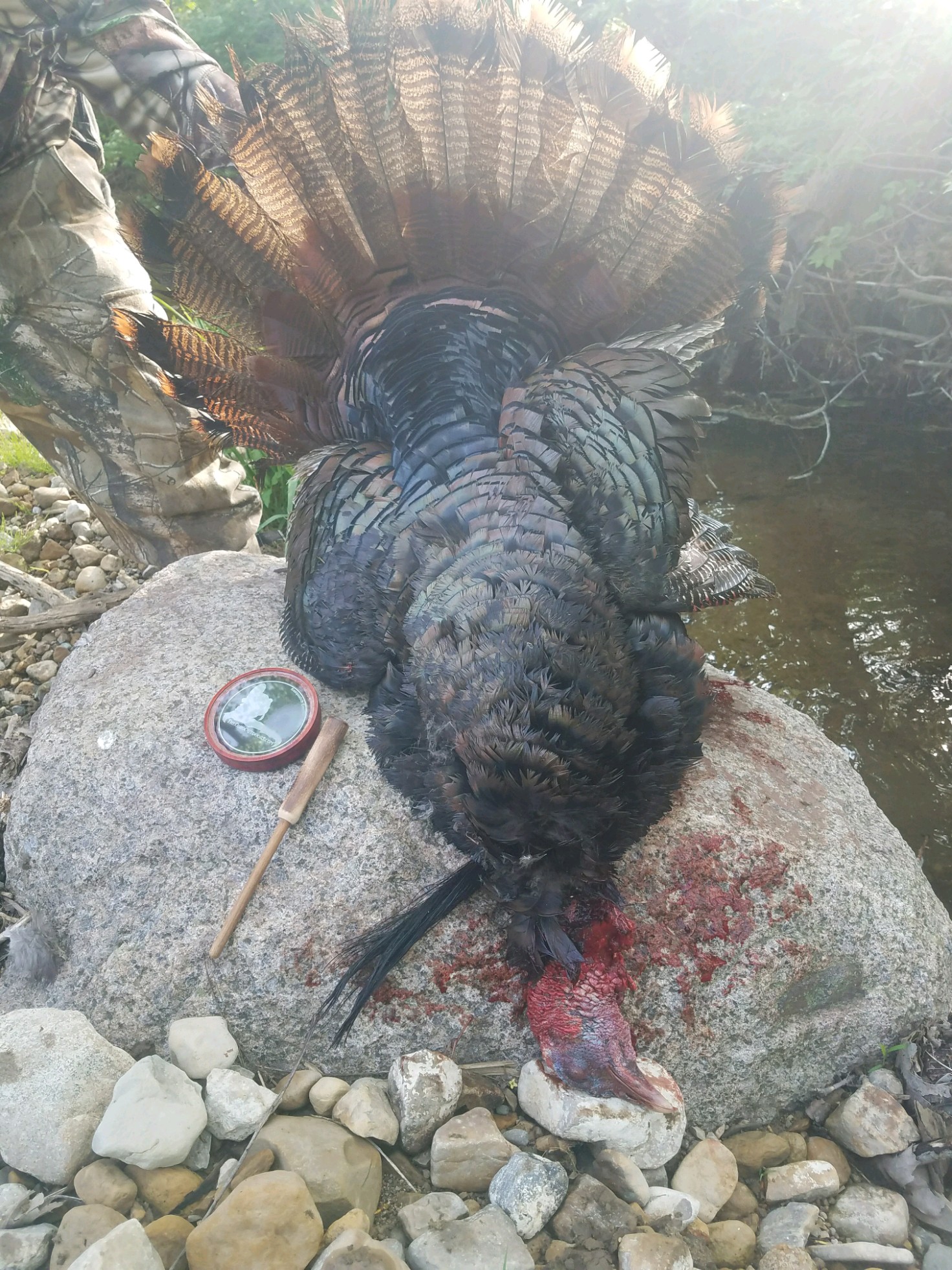 Interesting story and great ending.... Congrats to both of you for sharing memories that you always will talk about..... Nice bird....

That's a great story right there! Congratulations to you both!

Friggin awesome write up and ending guys! Congratulations to you both. Hilarious pics btw...

Real good stuff guys! Bang/flop sure makes all that work worth it! Congrats!

Awesome, congrats. Hell of a write up, as usual.

You didn't disappoint with the read or the pic!

Way to stick with it.

Heck if a write up Joe. Thanks for sharing.
Congrats to both of you for doing whatever it takes.

Epic write up and story, congrats!

I've got to hand it to Alex for that running shot. When that bird ran back out of the bushes not 10 feet from him he damn near took it's head off. It's easy to miss them at that range when they're standing still much less on a dead run.
C

Great story and memory down the road around a campo... Congratulations too you both...
Reactions: Dustinb80