TOO April Buck of the Month - Sean Curran

I'd like to be the first to congratulate Sean for being TOO’s inaugural Buck of the Month! :smiley_clap: Sean did an excellent job in reliving his experience on his blog. You can view Sean’s blog by visiting Curran's Outdoor Adventures; you can also read some great stories and view some outstanding photography on Sean’s blog. Without further ado, here is Sean’s recap on his Veterans Day Buck…

As I left home and made my way down to camp on Wednesday night, I was thinking about where I would be hunting the next morning. The available options bouncing around my head would eventually be narrowed down depending on where the other guys had their stands set up, and where everybody else had already been hunting that week. The plan was to go in someplace that I was already somewhat familiar with, set up early, sit until lunch, then decide whether to pack out and head to someplace more promising, or stay put if the deer movement was good. For the weeks leading up to my vacation, I'd been pouring over both aerial and topo maps of the areas we’ve been hunting, making notes of the likely places to set up based on terrain features that could hopefully funnel the deer movement within bow range.

Thursday's weather: Overnight lows hit 29 degrees before jumping into the upper 60's for the afternoon. Winds were minimal, ranging between 0 to 15 mph and coming out of the ENE for the most part. Barometric pressure averaged around the 30.36. Sunrise for the counties contained within the Eastern half of Ohio was listed at 7:07am according to the ODNR regulation book, with legal shooting light arriving 30 minutes prior to that. Even with the whitetail rut being full swing, the hot weather was probably going to limit daylight movements to dawn & dusk, with most of the movement to occur during the much cooler nighttime hours. Not exactly what you would call ideal conditions as a bowhunter on vacation.

The cell phone’s alarm broke it’s silence at 5:00am the next morning. A couple good luck exchanges were had with the other guys in camp getting ready to head out. In short order I had already made my way into the truck and was covering ground down the dirt road. I wanted to make sure I gave myself more time than was needed to get dressed, enter the woods, and the have those extra minutes to make the slow and deliberate hike up the ridge I intended to hunt that morning. I always like to try to be up in my stand and settled in well before legal light. Even though I was moving cautiously though the woods, the dry conditions made every foot fall sound, and feel, like I was walking on bubble wrap. I heard two different times when deer blew at me during my early morning walk, or at least in my mind they were directed at me because of all the commotion I felt I was making.

Soon enough I was resting with my back against the bark of the tree, elevated well off the ground in my climber, with my bow dangling from it’s hanger within reach of my left hand. The sun’s early morning rays started to push back the night’s dark grip and illuminate sky. Hen mallards were sounding off in the distance, followed shortly later by some of the Canada geese joining in with their echoing honks as the morning was awakening. Squirrels also sensed the safety of daylight’s arrival, and were soon scurrying about the bountiful buffet of the oak flat below. There's just nothing like experiencing the world come alive from 20+ feet off of the ground, and knowing that you’re part of it’s cycle as a hunter. That's a feeling I hope to never grow tired of, and something that not too many other people in this world are privileged to understand.

Before I had much more time to let my thoughts drift off, in the distance I heard that familiar sound, the consistent crunch of a deer making its way through the woods. I snapped my head to the right to try and locate the source. My eyes keyed in on the dull brown motion approaching through the brush. A doe was making her way up the backside of the ridge that I was facing. Then I spotted another set of legs behind hers, and these legs were attached to a much larger body, that was attached to a set of antlers. I quickly decided that this looked like a quality deer and eased up quietly onto my feet.

Almost automatically, my release was clipped to the string loop on my bow, as I pivoted as precisely as possible towards my right. The doe was doing everything possible to avoid the harassment of the buck in pursuit, as she burrowed herself into a mess of briars, a dead fall, and the tangles of young saplings that would keep him at bay for at least for the moment. Maybe she could now catch her breathe. The buck stood broadside like a GlenDel target, about 10 yards behind the doe, allowing me time to range the distance at just over 25 yards away. The issue was that because of all the branches, saplings, and underbrush in the way I just had no feasible way to slip an arrow in anywhere near his vitals. At least where he currently stood. I reached into my coat pocket, pulled out the grunt call, and put it to my lips. Then just as quickly I pulled it away. He's way too close, it might spook him, and he might pin my location down. It's not worth it just yet. Let’s wait it out.

By now the yearling was 30 - 40 yards up hill from my position, and the lead doe actually decided to follow her. I pivoted again, this time 180 degrees back in the other direction, towards my left shoulder, doing my best to keep the tree between me and the deer to conceal my movement. I was ready to draw, and as soon as the doe moved past my tree, I pulled back on the string, bringing the bow to full draw. I had an opening. Now all I needed was for the buck to follow. Peaking around the tree I could see his nose, as he paused watching the doe make her way up the ridge. All I needed was just two more steps, and he would be in a clear shooting lane. He was gracious enough to take those steps a moment later. I gave him a quick grunt that stopped him in his tracks, as he paused slightly quartering away, with my neon green 20 yard pin floating in contrast against the brown fur behind his shoulder.

The last thought that went though my head before I put pressure on the release trigger was "follow though." I watched my arrow bury itself up to the fletchings as the buck mule kicked, loaded up his legs, and dashed like a freight train down the hillside, into a small gully, then up and out the other side. He paused after jumping out of the dry creek bottom. I blew my grunt call in an effort to try and get his attention, and keep him from running. "Drop, drop, just freakin' drop!" A second or two later I see him start the wobble, then a stumble forward, followed by another lapse in balance..... "He's down! Holy s$#t, he's down!"

The wave of pure adrenaline, excitement, disbelief, relief, and everything else that gets pumped though your body in the minutes that follow something like this are simply incredible. Quite honestly, they're truly something that only another hunter can completely understand and comprehend. I still get shook up shooting a doe, and that's something that I hope never changes. But shooting a good, quality buck is something entirely different, even on another level. I'll let the pictures tell the rest of the story...

Even though I watched the buck run 60 to 70 yards and fall over, I still like to follow the blood trail. This time was no different. There was very good sign all along the route he took through the woods. 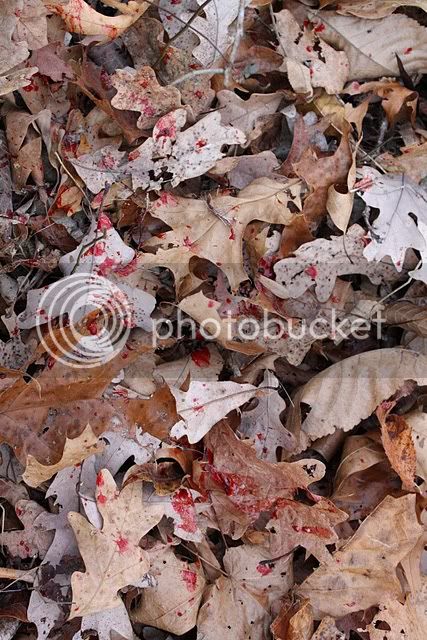 Picking up the blood trail near the arrow's point of impact.

As I walked along, I was able to find the remnants of my arrow. I didn't get a complete pass through, but the penetration covered all but the last six inches of the arrow. The arrow was dangling from some of the saplings in the area, and was right next to one of the many rubs located along this hill side. 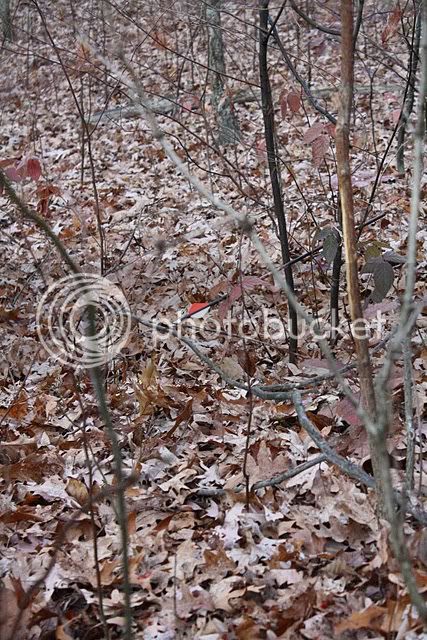 The broken arrow worked it's way out of the deer, but the damage had already been done.

There was no ground shrinkage on the rack of this deer as I approached him. In fact he kept getting bigger as I closed the distance from my stand to where he piled up. Once I had made the decision that he was a good buck, one that I was going to try and shoot, I didn't look at his rack much more. My focus remained on his body, the available shooting lanes, and trying to determine where my shot opportunities were going to come from. I'm glad I didn't start counting points or I probably would’ve shot ten feet over his back. 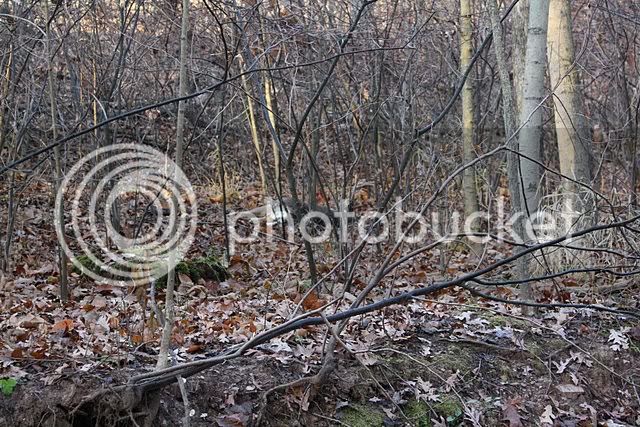 A picture taken from down in the dry gully at the bottom of the ridge. 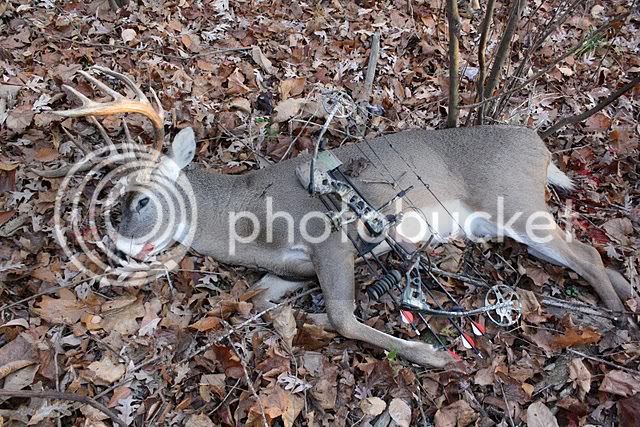 As I found him. By far, my biggest deer to date. 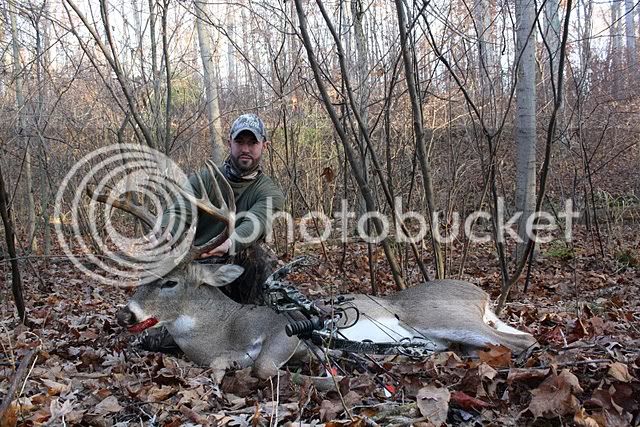 Heck of a buck, Curran. You are the man. Congrats on owning the inaugural buck of the month. A high honor in this place...It ranks way above a Nobel Peace Prize.

Man, great story Sean. Congrats again one one heck of a buck.

Awesome story and an amazing deer! Thanks for sharing Sean!

Congrats Curran! great read for sure,and heck of a buck.

Congrats Sean!!! great buck and a great story to go with it!

Good write up, better than most professionals can do IMO. Impressive deer also, good job man!

Thanks for the kind words guys. I do appreciate it. It'll be a tough one to top, but I'm sure as hell gonna try!!

And Longdraw... I knew you were gonna bust my chops on that. :smiley_blink: He's hangin' on the wall right over my shoulder.... which is in my man cave / home office. BUT he did look a heck of a lot better over that fireplace!!!

Awesome story Sean and an even better buck. Congrats on the inaugural TOO BOTM.

Awesome buck! That's how it's done!!!

Nice and a great read too.

Hell of a great story TOO a great hunt! Very nice write up and congratulations! Did you have him scored officially?