TOO August Buck of the Month: Mike's First Buck

This month's Buck of the Month is courtesy of Mike and it is a special buck indeed! The memories of our first buck are ones that will last a lifetime and they are often among our fondest hunting memories. I'm sure the memories of Mike's first buck will follow suit for him in the years ahead. Congrats Mike on taking a great first buck and for doing such a fine job on the Euro mount!!!

As the 2010 gun season approached, I still had no idea as to where I was going to hunt. I had tagged out in Zone A, which is my main hunting location near my house. Those two does were my first deer ever. My property in Zone B was off limits during the deer gun season per the land owner’s request. There were a few public hunting areas in Williams County that I was interested in trying. I finally settled on a small wildlife area near the private land I had bow hunted previously in Zone B. I had never scouted or hunted this wildlife area before and after reviewing the maps, I had a good idea where I was going to setup on opening morning.

The morning of November 29th finally came. I arrived near the creek's bridge at 5:15AM, got dressed and gathered my things. I followed the creek to the bend where I wanted to setup. I found a nice tree and climbed up 25 feet and settled in. As time passed I was pleasantly surprised to see that I was alone. I couldn't believe it! Could this wildlife area be so small and unknown that I would be alone on opening day of deer gun in Ohio?! Nope! Approximately fifteen minutes until legal shooting time, the cars and trucks started pulling up and the orange army started to invade. I had guys 50-100 yards from me in most directions. I was the only hunter in a tree and I felt a lot safer! Not long after legal shooting time passed there were gun shots coming from almost every direction. I was attentive and patient knowing that a deer could be pushed towards me at any time. It was approximately 9:20AM when I heard a deer bust into the woods to my east near where we all parked. He was almost 150 yards away coming right towards me fast. Everything from now until the time he died happened so fast that the account is still a bit foggy. I stood up took the safety off and aimed toward the running deer. I lead him and fired at approximately 50 yards. MISSED! He stopped and then started to trot west still coming towards me. I drew up and fired again. I MISSED again! I'll be damned, but he started coming my way again and he stopped like 25 yards from me. It was almost like he was saying, “Shoot me already you dumb ass, I'm like right here”. I had one shot left! By this time I was shaking uncontrollably! I drew up, aimed and fired. The deer just stood there! Did I miss again?!? Instead of trying to reload, I just stood there shaking like a leaf in disbelief. All at once I saw him twitch, and then twitch again and then again until he fell down. I got him! I snapped out of my stupor when he jumped back up and started to make a run for the creek not more than ten yards away. I fumbled to get a shell into my gun and at that point he jumped into the creek and started to swim. Almost immediately he went under and that was it. He never came back up! I just sat there and let the last few minutes sink in. Then I noticed the ache on the bridge of my nose and the little bit of blood from the scope bite. It all happened so fast, that I didn't even know how big this deer was. From a distance, I thought he was a little half rack three pointer.

After getting back on the ground, another hunter greeted me. He congratulated me and jokingly thanked me for shooting “his” deer. He offered to watch my deer, which was totally under water, while I packed up my things and I got my sled. The buck's intact rack was about six inches under the water. I used my drag strap to fashion a lasso and it took me a decent amount of time to actually snag his rack and drag him to the bank. I ended up shooting the deer a bit far back and in the stomach and liver. That was a messy field dress to say the least! I loaded him onto the kid's old orange sled and began the difficult drag. Where was that that other hunter now? I'm in good shape and I must say that drag just about did it for me. After a bit of a rest and praying and hoping someone would stop and help me get the deer into the van, I had to hog tie him to the sled and lift him up by myself. On the way to the check station, I had some time to reflect on the blessing that I had just received. The check station, which is also a butcher shop, was gracious enough to let me rinse the deer out before leaving for home. I made quite a few calls on that long ride home. After all, I had just harvested my first buck! 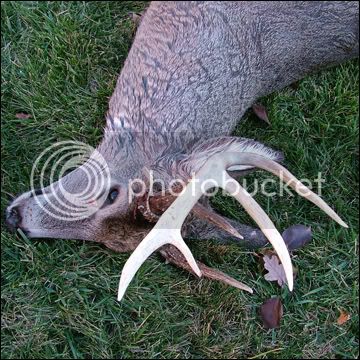 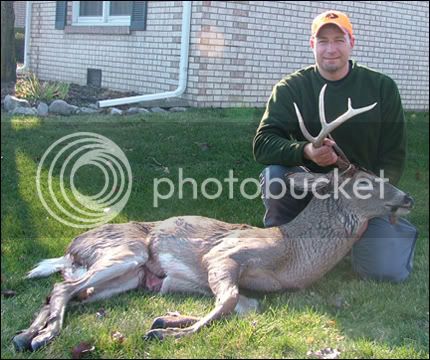 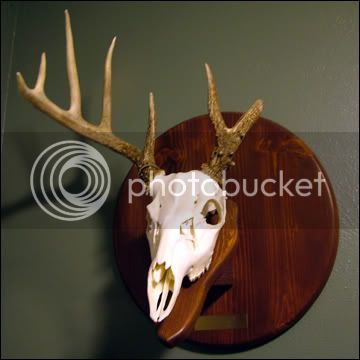 Awesome story and a great buck to boot! Congrats on the first Mike! ickle:

Oh yeah! Now that gets the adrenaline going!!!
Congrats again on a great buck

Great Story Mike... Sometimes those slugs just don't fly where you're aiming. Strange little things.. But you got him.. And an awesome story to go with him.

Really good story and hunt! And I like the way that mount turned out - that's danged cool!

Congratulations on Buck of the Month Mike! Great write up! Thanks for sharing.

great write up mike , i love hearing stories about shotgun season , and atleast i know im not the only one that misses em with a slug gun

Congratulations on a great buck Mike! Nice read TOO. Love the line, "shoot me already your dumb ass...". I know I have been there thinking what the hell am I doing.

Great read Mike!! There's nothing like the first one. Congrats on the buck and a helluva nice job on that Euro mount. It looks sweet!!

Great story Mike! I love reading these. I feel like I was there. They are getting me more amped for September if that's even possible.

Awesome Story Mike. Thanks for sharing. The first is always the one you will hold closest.