where'd he come from?

pulled my cams today before the squirrel hunters found em, might just put one back now... 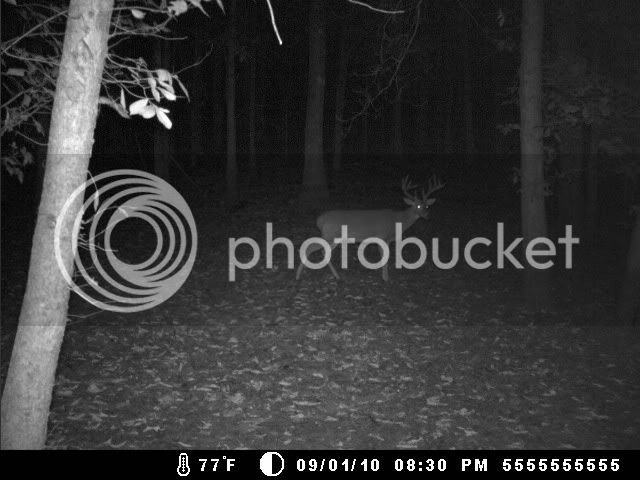 I told ya LMAO..All you had to do is spin that cam around lol. I knew they had some good ones still running out there ..Your Welcome buddy lol.

Heck of a nice looking 10 there my friend.

wanted to make sure the picture poted before I finish my story.

I decided to pull my cams today since both are on the same property and I am not sure how many squirrel hunters to expect on this spot. I didnt want them to be found. I got home and put them in my digital camera and saw doe after doe after fawn. Afew pics of the small 6 point from last week and then i spotted this guy.

Not sure how to score a buck (kinda new at this) but I'm gonna guess any way...

I'm guessing 3 1/2 year old.
I say that because his back hasnt started to sag but his belly has. he also still has an angular face but it is starting to get a little "blocky"

I'm just hoping to see him during the season. I am hoping to put my first buck on the ground this year, and I told redcloud that a six or better would do, I think this pic just saved that little six pointers life, if I see him, I know there is a better one around.

The really funny part is....I stood in that very same spot when we turned that cam around and set the laser pointer lol.

thats also the same spot I shot the first squirrel of the season today.

heres another bit of humor. this is the picture just before that one.
who do you figure that is chasing off the little six?:smiley_chinrub: 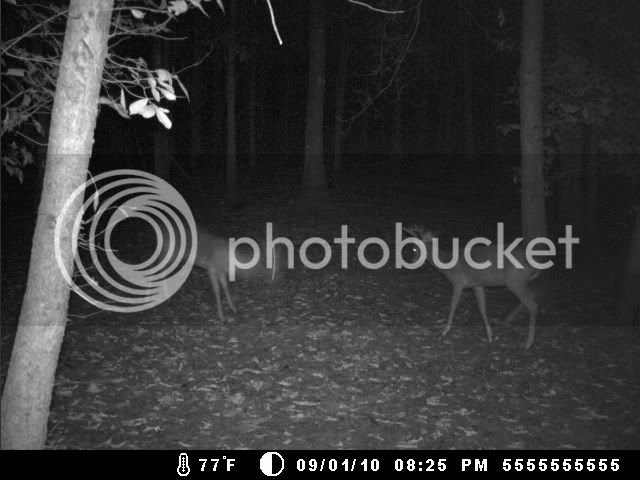 lmao..now that's a good one

See that tree straight back between the two..I would put my climber in there

That's a good lookin' buck Dante. Hopefully he sticks around and gives you a shot this fall!

Solid looking deer Dante. Prolly is a 3.5 but I agree with RC on the score due to his tine length is alittle on the short side. Still a great deer and would be an excellent goal for you this season. Goodluck with him.

Good calls on age and score so far. Nice buck dante. Hope he takes an arrow from one of you guys!!!

Are we heading out this weekend to hang your cams back out ? I took mine back out today with about 40-50lbs. of apples thanks to Steve and his dad .

sounds good, maybe we can fling some lead at some nutchuckers while we're at it.