Those Doc's will last you a long fuggin time, Joe. I've always liked their boots.

Jackalope said:
I might wear a pink button down shirt with American Eagle jeans to work, but one look at the boots lets them city people know ill meet them in the parking lot if need be. lmao
Click to expand...

True true. Erin bought a pair of Doc Martins when she worked in Alaska during the summers while in college. She still has them. Granted, they don't get worn often now, but they have hiked in Ohio, Kentucky, TN, NC and several other places with me I am sure. She wore them in the rain forest in WA and all over AK. She has put some miles on those boots. If you worked construction or something I don't know how they would hold up, but you should get years of use out of them in the office.

True true. Erin bought a pair of Doc Martins when she worked in Alaska during the summers while in college. She still has them. Granted, they don't get worn often now, but they have hiked in Ohio, Kentucky, TN, NC and several other places with me I am sure. She wore them in the rain forest in WA and all over AK. She has put some miles on those boots. If you worked construction or something I don't know how they would hold up, but you should get years of use out of them in the office.
Click to expand...

I don't know about that. Lol. These cat boots are almost two years old. I'm hard on shoes. I'll leave work and head out to check cams, cut wood, shovel snow, work on the truck etc. I'm not a fan of changing shoes.

Two years is a good long life for a pair of work boots in my opinion. Like I said, Erin wore them hiking and such. I can't see her hiking as much in 15yrs as what you would wear them in 2yrs every day. My point though, they have held up well for her.

I'm lucky to get a year out of the metgaurds the steel mills require. Melting off the soles is usually the culprit that puts me in a new pair. Red Wings have been on my feet since "87" when I worked on my first coke oven. My last pair isn't quite a month old, and they have the new soft, internal metgaurd. I also keep a pair of lace ups for the plants that don't allow pullons. The outfit I'm with now will pay $100 a year for boots, but it still leaves me with a good chunk to cover. This year they are covering a second pair as we all just did a hot trough job and burnt up our new boots.

The last 4 years Ive been wearing Thorogood's. I really I them cause they hold up real well and their made in the USA.

X2 on the soles melting off. That's what happened to my last pair of wolverines. I find myself in a lot of steam plants walking on catwalks above the boilers and even on the piping itself. I'm hopeful the soles on those Ariats will stand up to it better than the wolverines.

Steel toe doc martens were my shoes when I worked in the chemical plant.

Now i work in the hospital and wear Merrells every day, used to wear Sanitas but dont find them as comfortable anymore.

My outdoor boots are either merrells or cabelas full draw lightweight ones.
J

hickslawns said:
That is about when I quit wearing them. They weren't lasting me more than 6-12mo. I dropped back from $175-200 boots into the $125-150 range because they weren't lasting. If they are equally comfortable, and last the same amount of time, might as well save some bucks.
Click to expand...

I did have a cheaper pair of Redwings that I did not like... Now I get them in the 250-300 range. They feel way better and last longer. I've gone through my share of Rockies and Wolverines in the 100-125 range.

I still have a pair of Thorogoods and those were nice! I need them re-soled. Great boots.

I have gone through Ariats, Rockies, Wolverine and Justin boots. My go to now are Double H, more pricey but more comfortable and better made than anything I've worn.

palmettopredator said:
My go to now are Double H, more pricey but more comfortable and better made than anything I've worn.
Click to expand...

Ditto on the Double H. I used to wear C.E. Schmidts from Tractor Supply. Best damn pair of boots I ever owned. Paid $50 for them and wore them every day for 3 years. Bought a second pair I had to pay $80 for and wore them for 2.5 years before I took a big chunk out of them on a cinder block. I have had these Double H's for 6 months and love them... 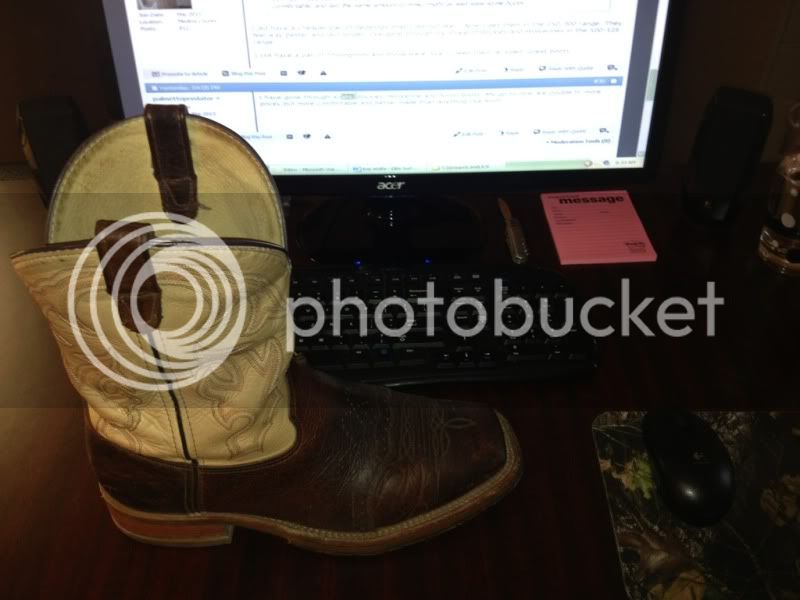 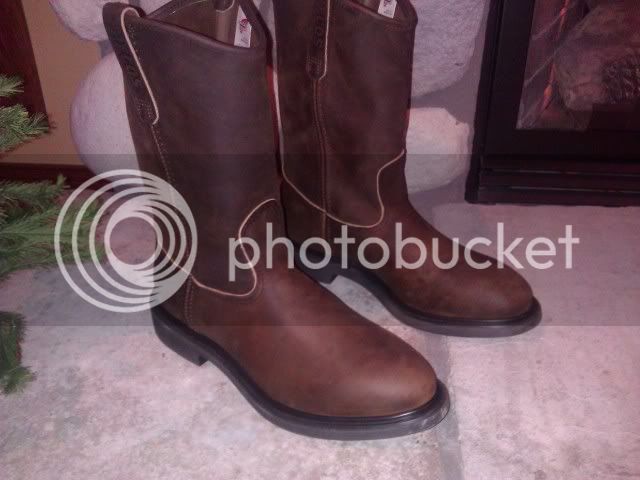 Digging up this antique...

I loved those Double H boots, but not as much as my Justin and Dan Post ostrich skins. Unfortunately, I have some serious alignment issues which include an aching hip and lower back. I was told to stop "wearing heels", especially when standing for 6-8 hours a day at my standing desk. I have 3 pairs of Merrells that I wear and they're extremely comfortable like all Merrell footwear, but they're still not boots and now that I can wear jeans again, they're not the best pairing with a higher-end pair of Ariats or Wranglers. I'm looking at some Ariat and Twisted X slip-on, moc toe options, but I'm also considering a pair in the same style as these Thorogoods. Wondered if anyone rocked these Thorogoods or a similar style of boot and what their review of them was. 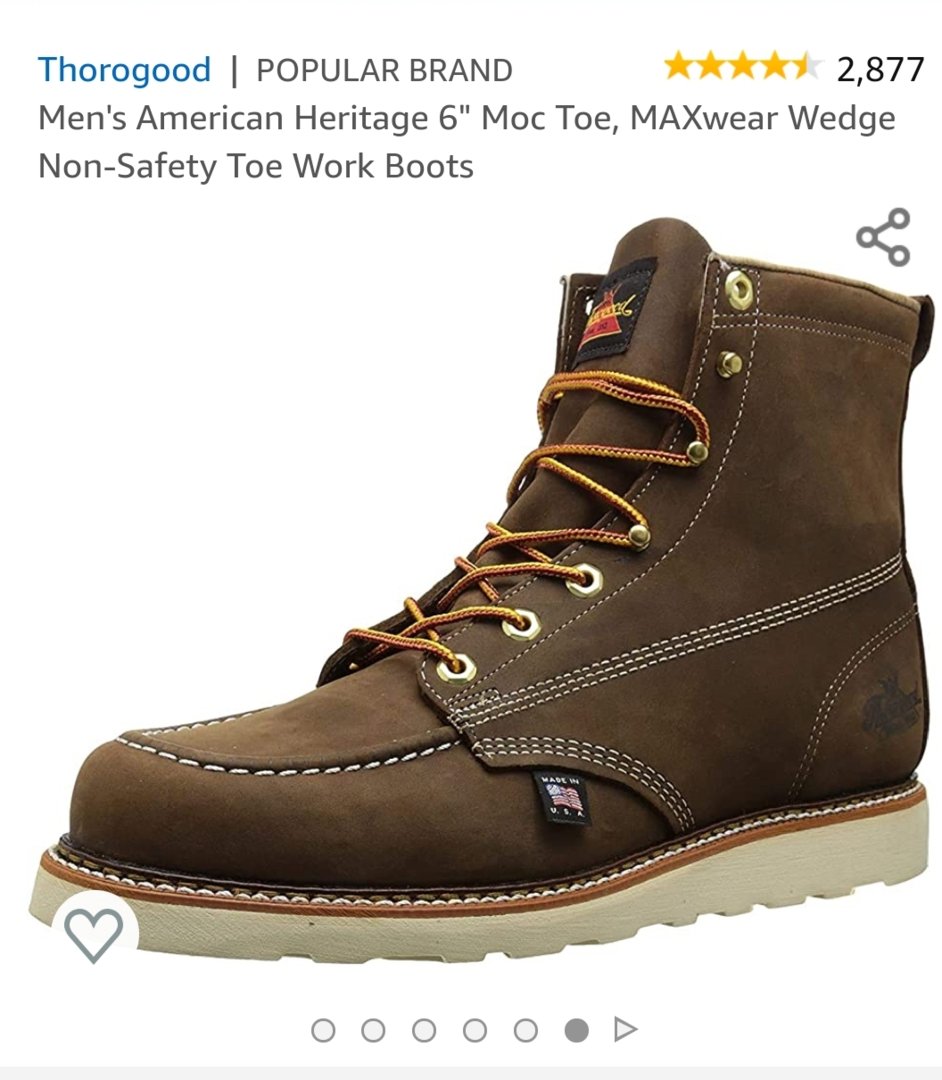 Buy once cry once and get order a pair of whites, nicks or jk boots. Yea they are 500 dollars up front but they are custom fit to your foot. My lower back stopped aching when i switched. I also stand up straighter. You will get 4 years out of them before they need rebuilt if you take care of them. which will run you 200 to 275 depending on who does it and what is wrong with them. Mine are 3 years old and look better than most peoples six month old boots. In the long run you will end up spending less compared to buying new 100 to 200 dollar boots a year.

Better boot care will take you farther on any pair of boots. For the love of god stop kicking things with the toe of your boot. If you have to kick something use your heal. Unlined boots are better than lined boots.
Reactions: bowhunter1023, giles and Sgt Fury

I have a pair of fire-rated Thorogood boots for controlled burns and they are 100% awful. Terrible fit. Honestly the worst pair of work boots I've ever owned.

If you want something in that style, though, Irish Setter makes a very similar boot. The uplander, maybe? I can't remember the exact name. Coworker is on his second pair and loves them. Hard to go wrong with Irish Setters.

Tom is right about the custom made boots. You can't beat the quality and fit. It's just a matter of whether or not you want to pay that kind of money. I've got a pair of Wesco boots for wildland firefighting. They are a custom boot and were about 500 bucks if I remember right. Crazy expensive... but superior quality.

For "everyday" work boots without a heel, I would look pretty hard at the Irish Setters.

** Edit... it's the Irish Setter "Wingshooter" **
Reactions: giles, bowhunter1023, Archertl and 1 other person

Here is a little comparison between my three year old white's smoke jumpers and my two year old Chippewa 20085. I was actually going to toss the chippewa's out after mowing the grass tonight but this thread popped back up so i decided to do a comparison. 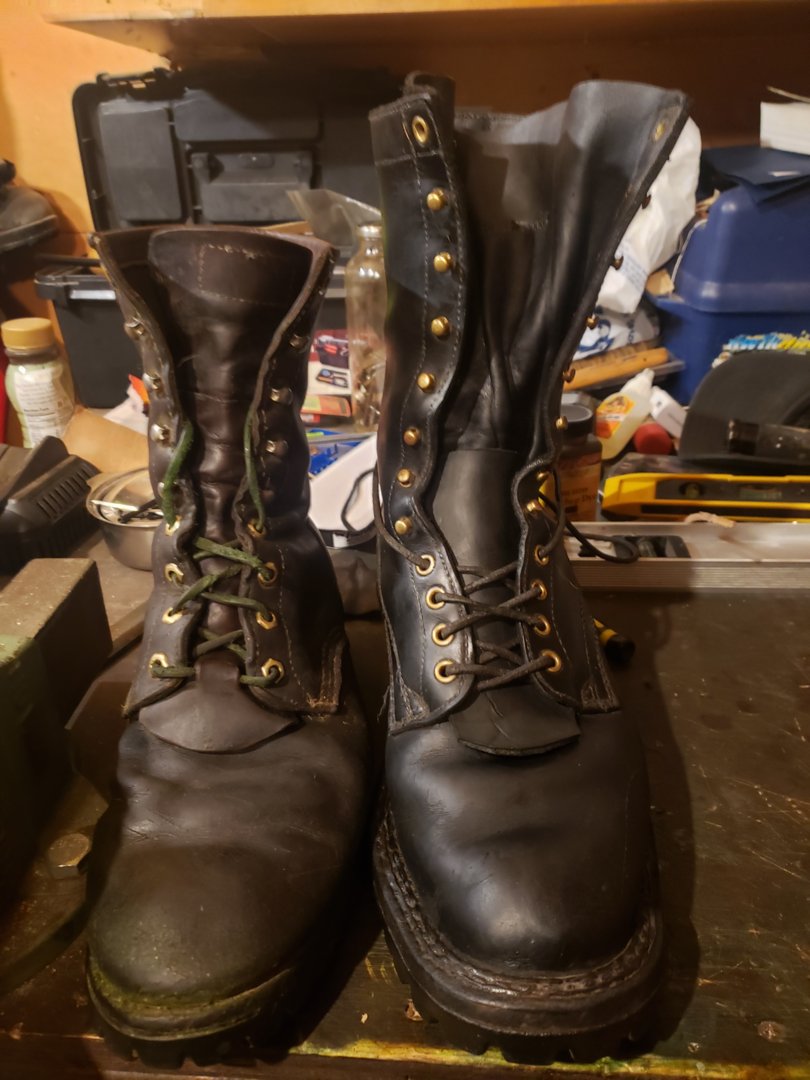 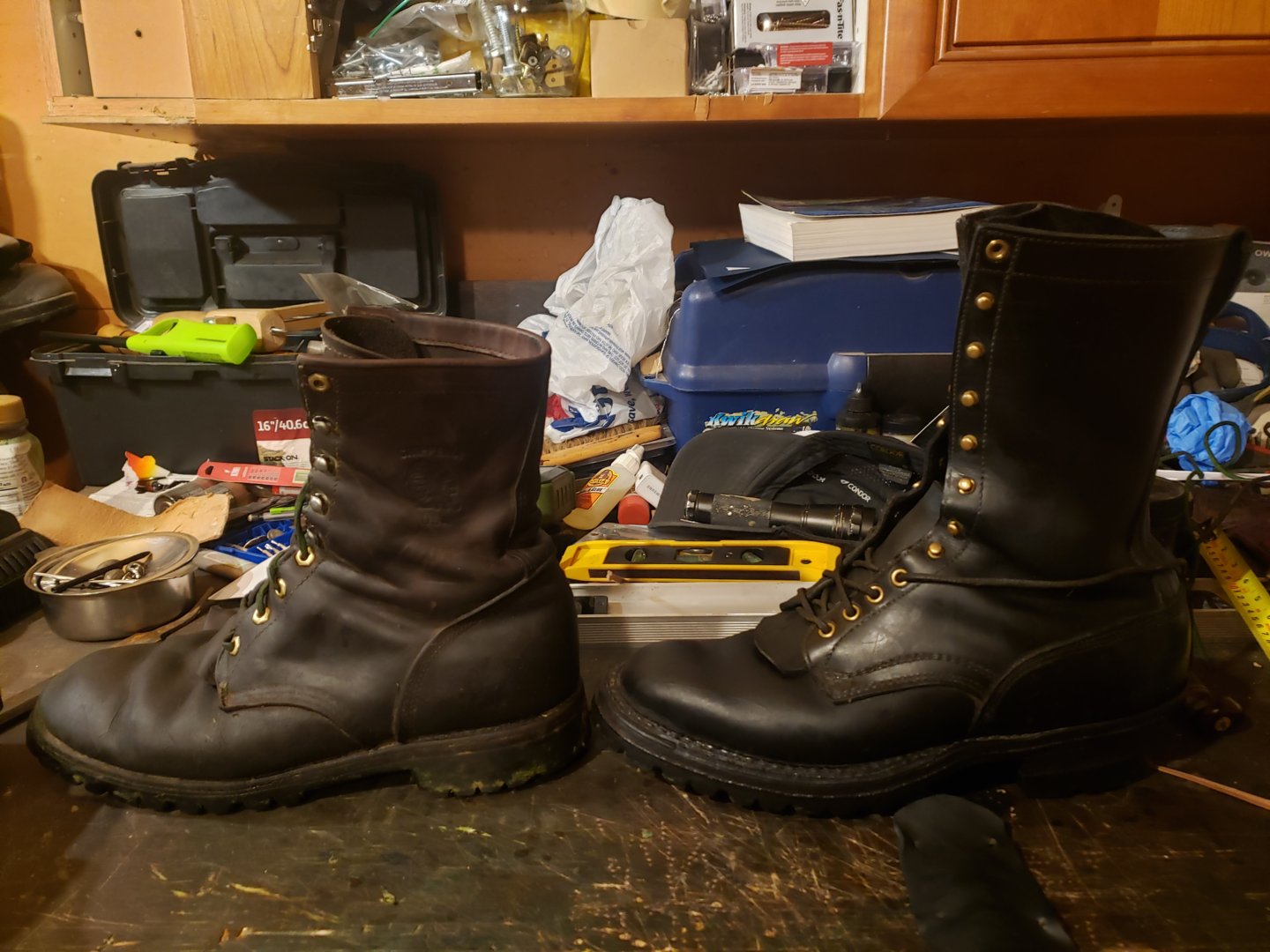 Chippewa 20085
Chippewa actually makes good boots and still has a US product line. I bought the chippewa's boots while my White's stockman packer boots we being rebuilt. I recommend the chippewa's to people not wanting to buy custom boots. For the money they are pretty acceptable.They are built in very similar in construction to the white's; however the quality of materials are not the same. Both boots are full grain unlined leather, goodyear welt, and are triple stitched to the upper. Both boots have been used and cared for the same. They actually both have the same model vibram sole which seems to wear the same regardless of what boot it is attached to. 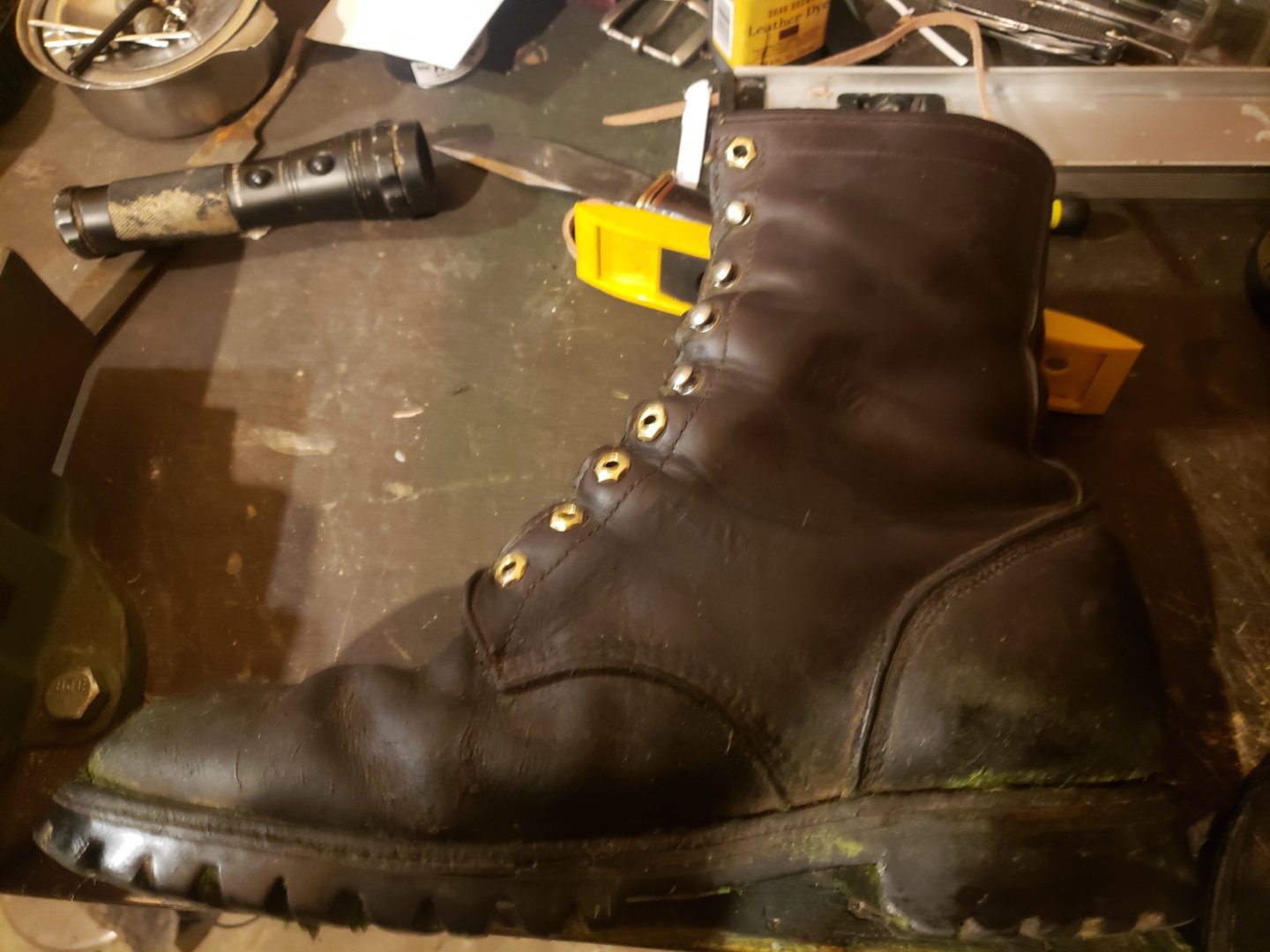 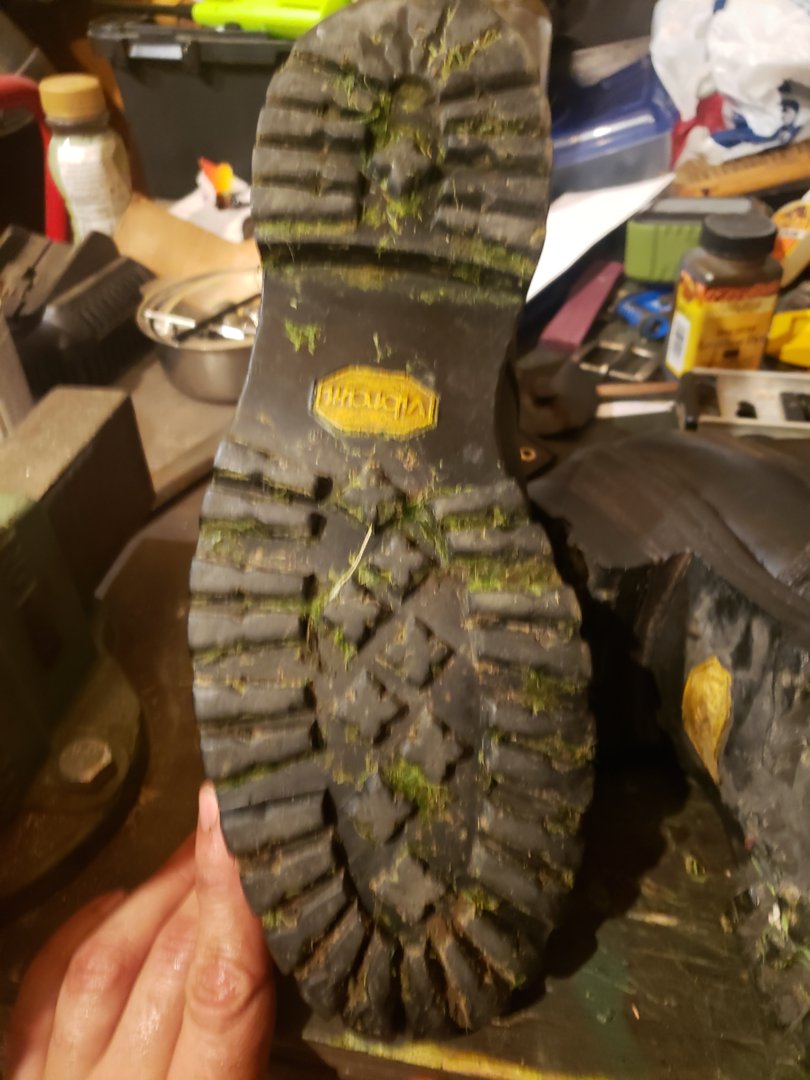 The sole on the chippewa is not over stitched and screwed. It does have nails in the heel. 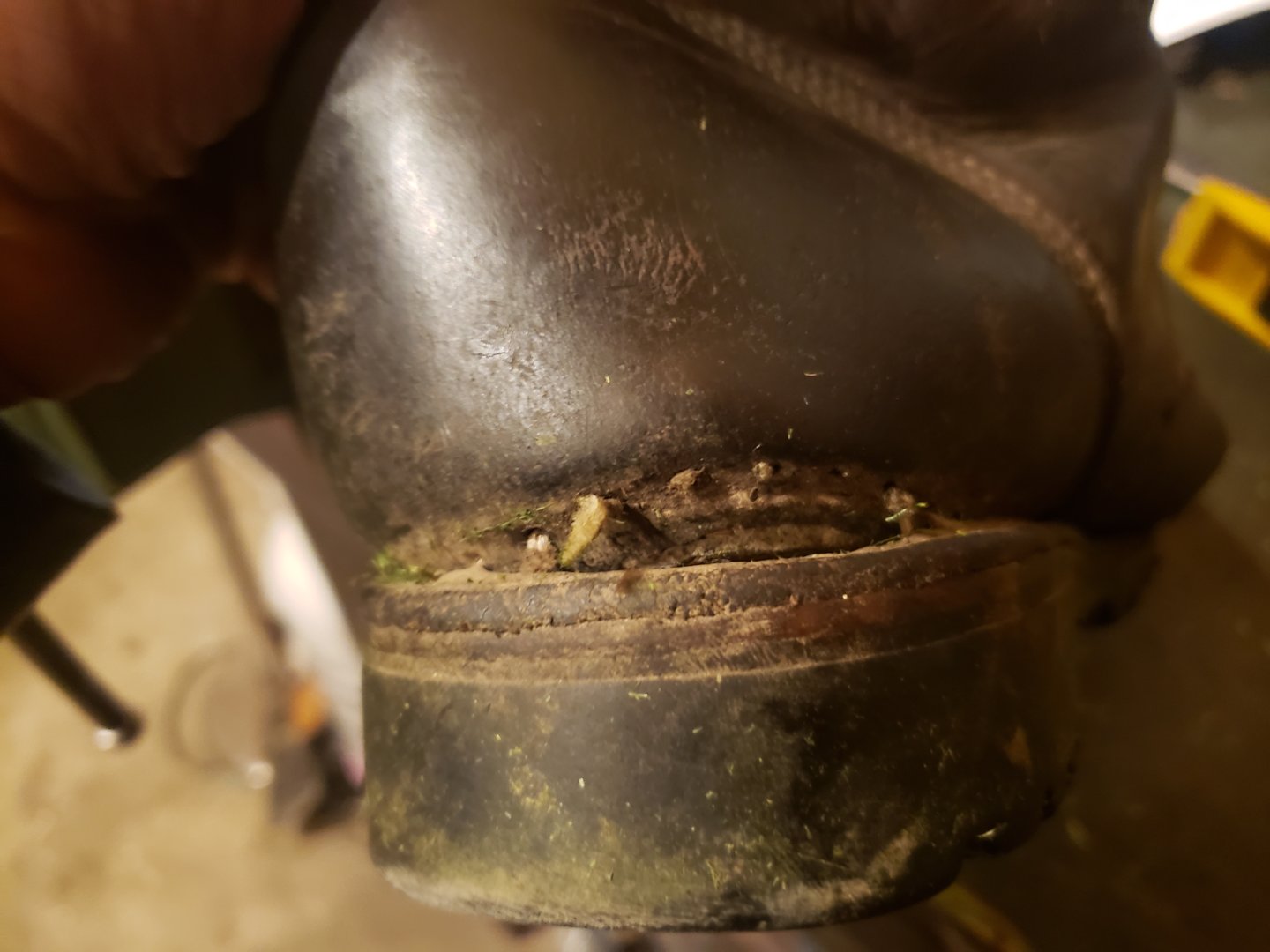 The welt has completely failed. 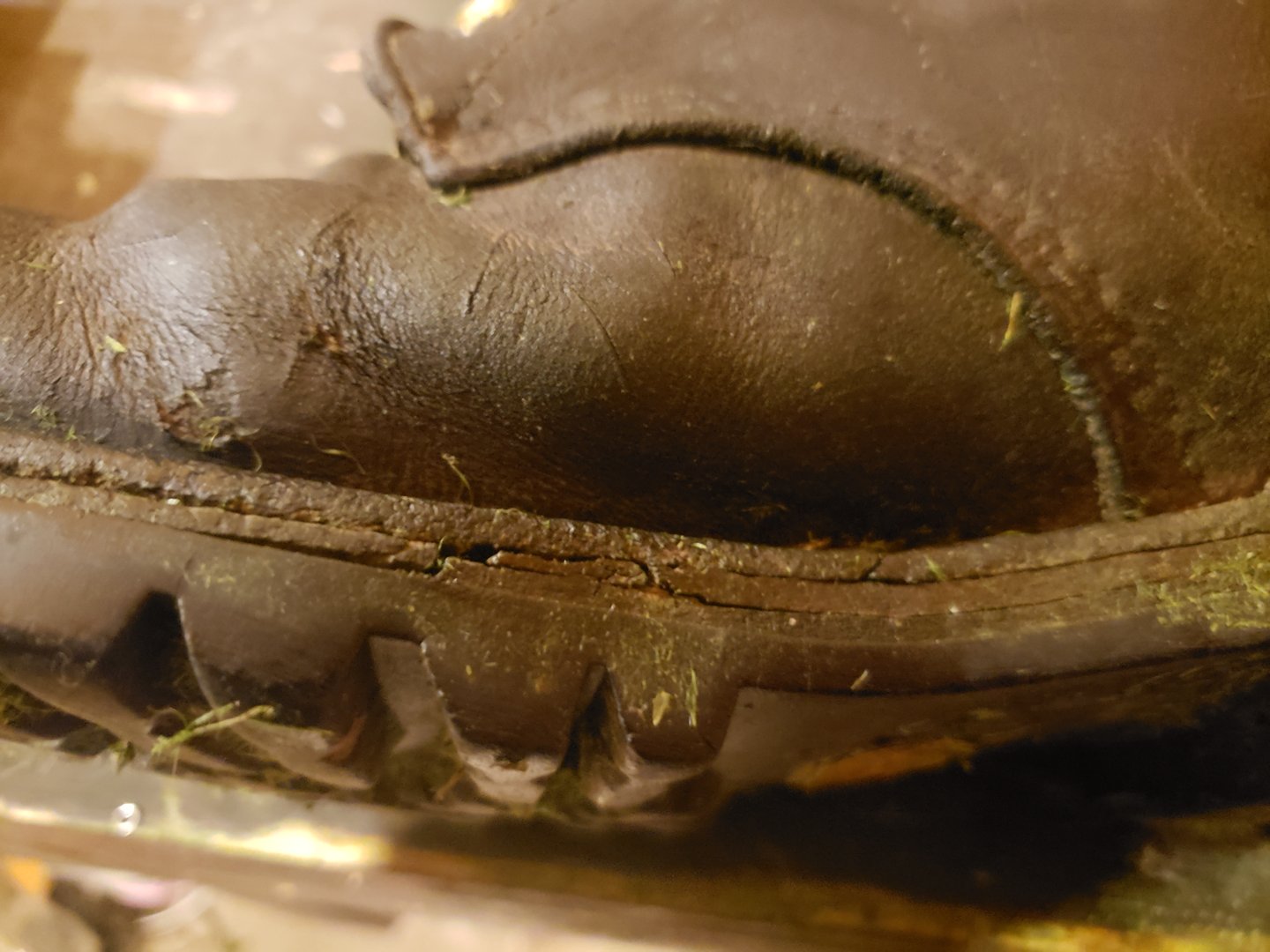 The welt is much thinner and has cracked and separated. 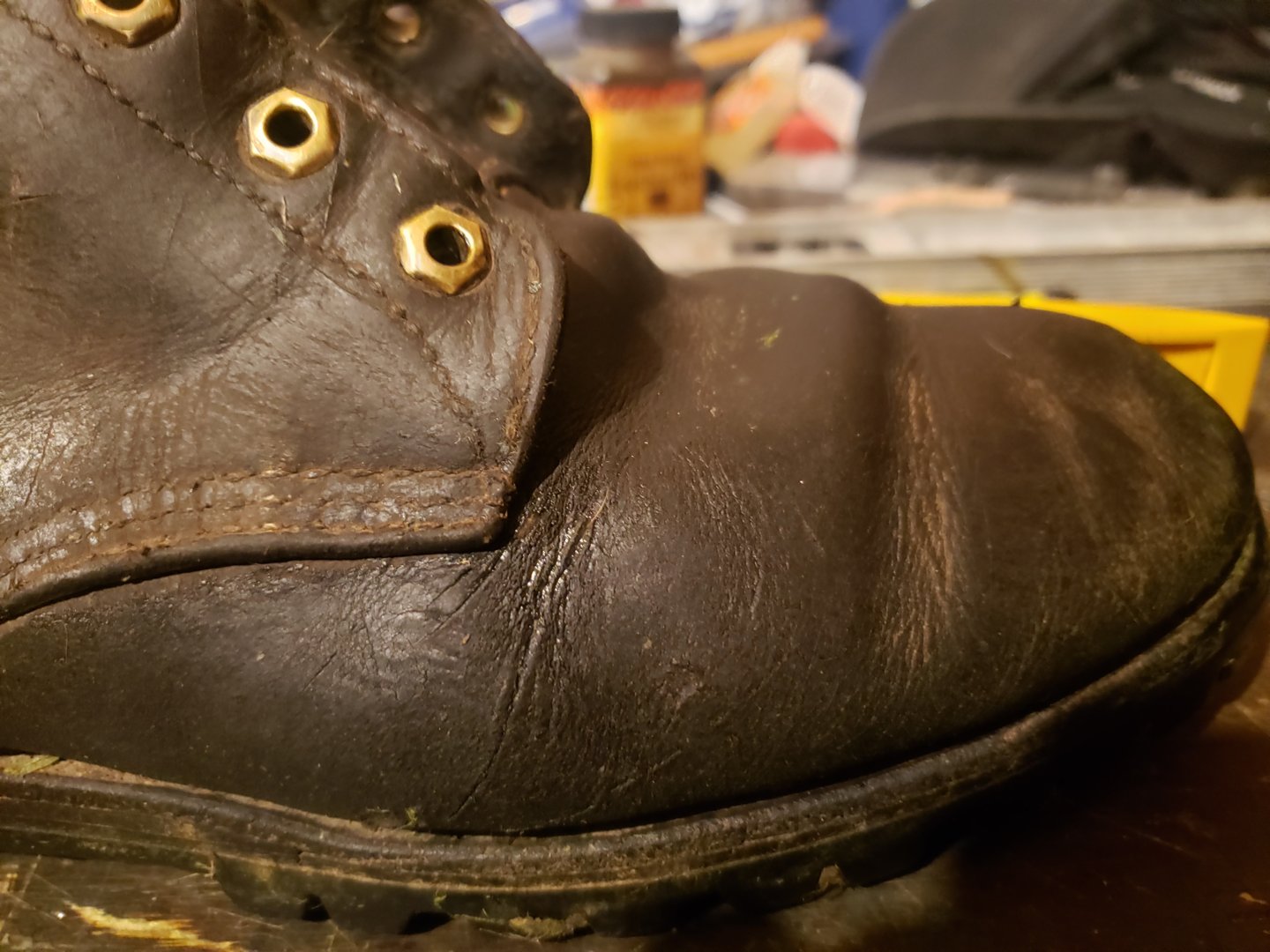 The leather has cracked and parched dispite me greasing them weekly or if the boot gets excessively dirty. I also oil the interior of the boot once a month.
Last edited: Jun 4, 2020
Reactions: finelyshedded and bowhunter1023

White's Smoke Jumper
The smoke jumper is one of the most popular wildland fire, logging and work boot in the PNW. I bought these boots three years ago and they still feel and look great. The break in time on a custom boot is going to be longer because the thickness of the materials. These boots are custom ordered to my feet. The arch, toe box and fit around the calf differ between the left and right boot. The leather is thicker and tougher. The gusset also goes all the way to the top of the boot. That is something you will only find on a custom boot. The purpose of this isnt to shit on the Chippewa's or other non custom boots. I am just trying to show the difference in quality. It serves to reason that if you are paying twice as much you should be getting twice the boot. I think it is clear that is the case. 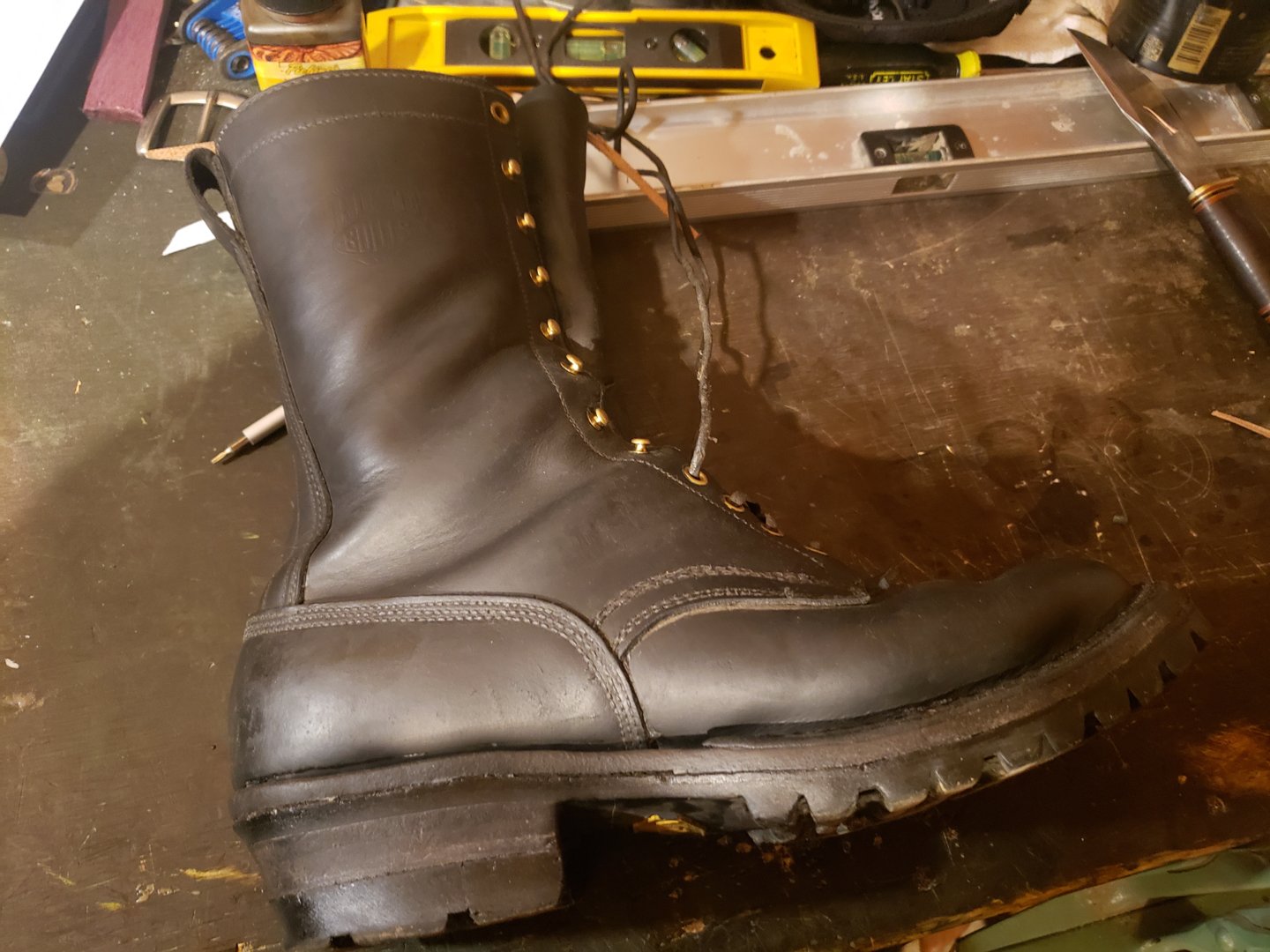 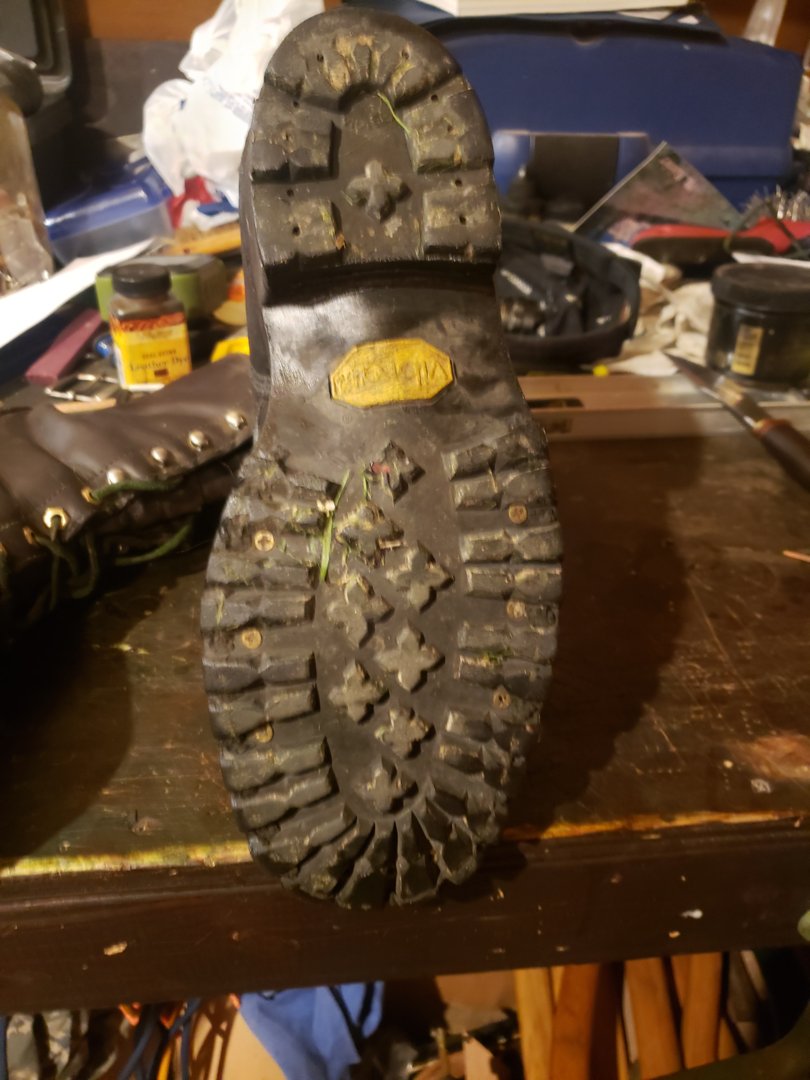 The sole is screw and over stitched. The heel is also held on by like 30 nails plus glue if you count up all the layers of the stacked heel. 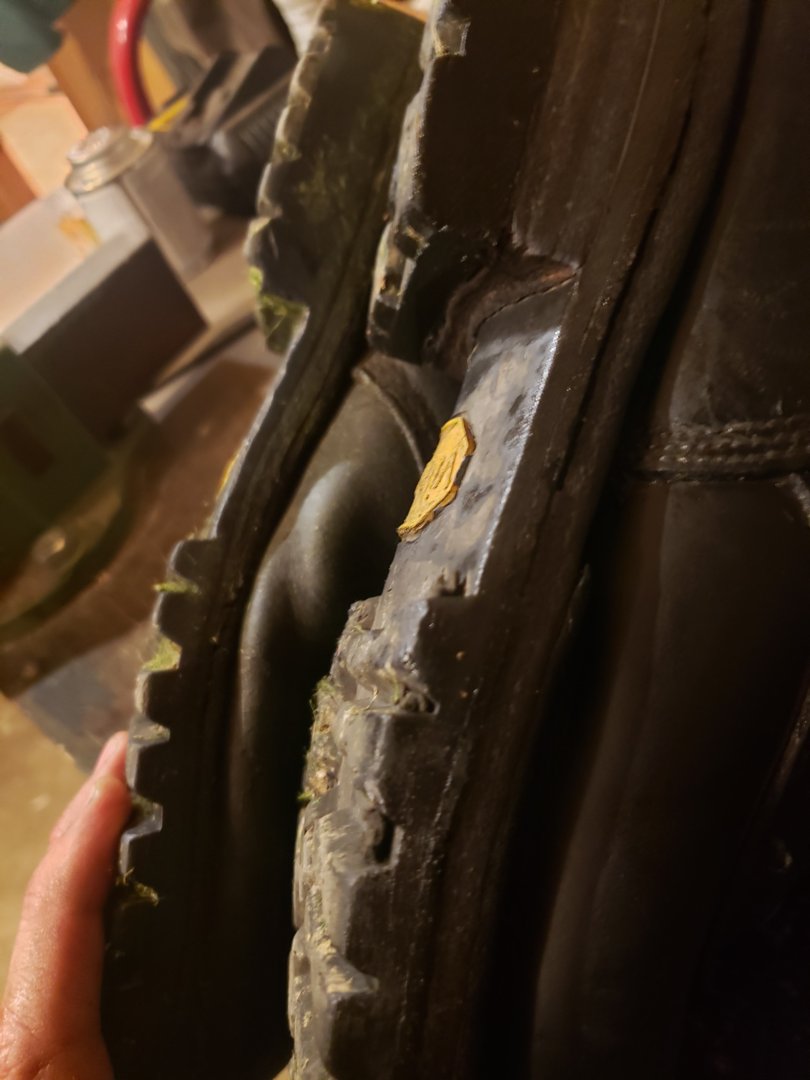 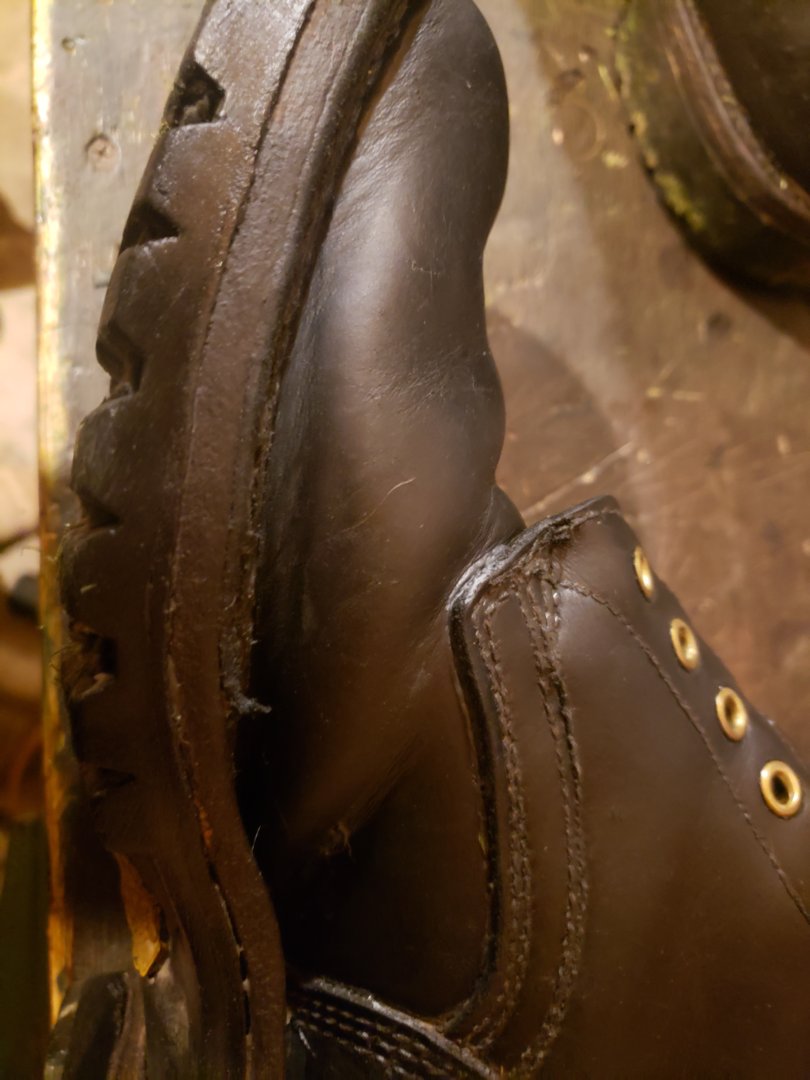 the leather is not cracked and parched. Also the welt is twice the thickness and has not deformed or cracked 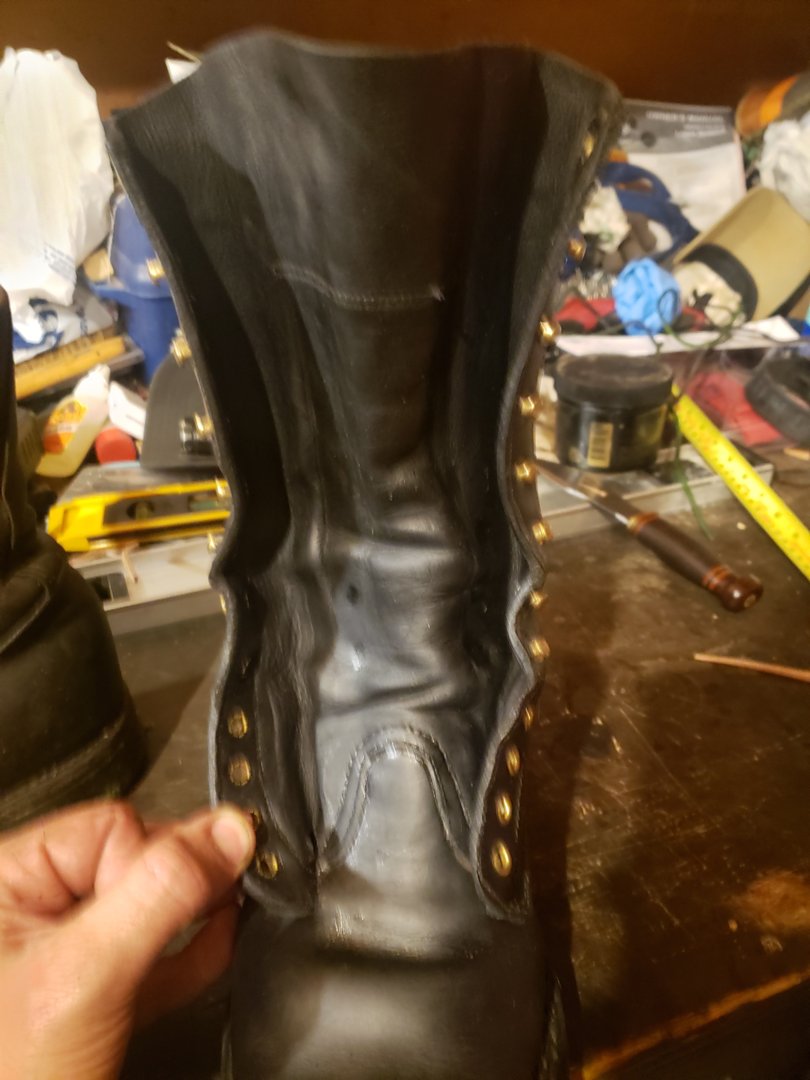 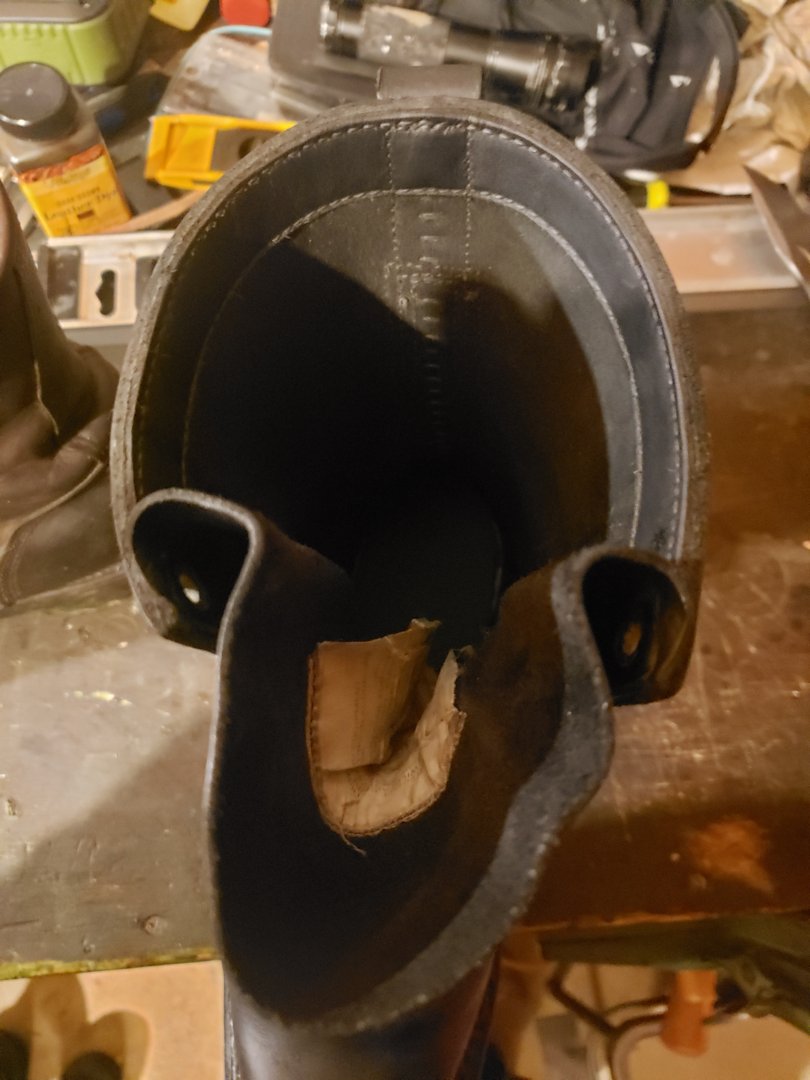 The leather is double the thickness excluding the tongue.
Last edited: Jun 4, 2020
Reactions: finelyshedded, 5Cent, Sgt Fury and 2 others
B 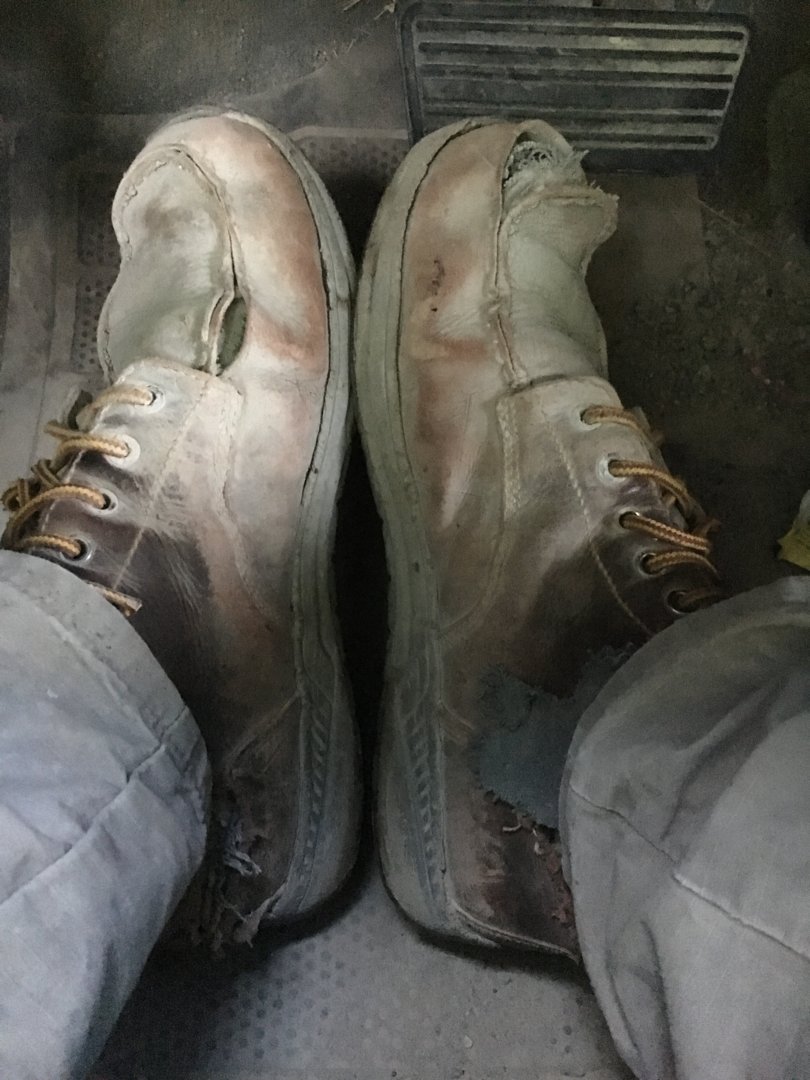 If I can get to late August I'll get a year.
Reactions: Sgt Fury, Big_Holla, giles and 1 other person

My dad had a few simple philosophies that stick with one to this day. One was "some things in life are worth spending money on and good boots are at the top of the list". Same guy that gives me shit about my $500 Dan Posts, but damn are they comfortable and a great conversation starter in the professional circles I run in

I owned a pair of Whites and loved them! I’d still wear them if I could get my foot past the bend. Tolerance is so good that with my limited range of motion, I just can’t get my foot in and out of them. (Maybe I need to call them...I think I still have them in a tote somewhere.)
You must log in or register to reply here.
Share:
Facebook Twitter Reddit Pinterest Tumblr WhatsApp Email Share Link