Has anyone seen the 163” deer killed a week ago in meigs county.

Wednesday was a spectacular day to be in the woods hunting, even though it was the day of the full moon at its peak. There wasn't an hour that went by where I did not have multiple new deer encounters each hour while in the stand.

This is my second deer harvest of the season and she was one of the four different nanny does that I encountered on that day that also had twins with them. I also had several antlered deer encounters as well, just none of what I am looking for.

The following is the shortest created version of photography captured of this particular deer harvest, which includes the shot taken at normal speed, followed up in super slow motion to give context of what I was wanting to accomplish, more or less, which I succeeded in dong given the circumstance.

The doe showed up in the area at 10:30 a.m. I waited on her to give me a better shot opportunity and I felt that she wasn't really going to give me one so, I took a higher than normal risk type of shot and it turned out better than what I was anticipating or expected.

As you will see in my bow attached Tactacam video below, I waited on her to take just one more step because it appeared that she never was going to give me that perfect broadside shot opportunity. As I patiently waited for her head, eyes, ears, basically her entire attention being focused furthest away from me when I finally released. My arrow entered right behind her left furthest back rib, hitting the frontside top portion of the stomach, through the liver, through her inner chest cavity, taking out both lungs, the diaphragm and sliced off better than an inch of the bottom portion of the heart, and then the arrow finally stuck into the very front portion of her ribcage on the opposite side, within some cartilage. I did not get a full passthrough, however approximately 16+"s of my arrow was completely inside of her. She died very quickly and the recovery from the point of impact was approximately 20-25 yards, very near to the edge of the cut soy-beanfield, which made it very easy on the drag job all the way to the pickup. My arrow and broadhead was not damaged in any way and the both are back within my bow arrow quiver today.

After the shot and the other two younger deer scattered into the beanfield, the both of them returned in a matter of 8 minutes and continued to feast on the corn for approximately 15 minutes. After they finally left the area, I climbed down and recovered my deer harvest.

I had the deer dressed and into the back of my pickup before noon. I drove her home quickly to skin and quarter her out and stick her into the freezer as quickly as I could.

I was back in the same hunting stand by 4:10 p.m. for an evening hunt. No sooner I sat down, her twins showed back up for another late afternoon meal again of corn and acorns. That entire evening hunt was another action packed deer event as well. Approximately dozen more deer encounters, including a close encounter with a coyote right after quitting time while hiking back to my truck.

Most all encounters were at extreme close range, like less than 20 yards and some, were just feet away.

Those additional videos will be posted on my YouTube channel sometime this weekend when I set aside some time to do them and no other place, so, if you're interested in viewing those videos, that's where they'll be after this weekend.

Finally, this is my second deer harvest for this county, which has a three deer bag limit. I'm holding on to the last county tag for one of the four local good bucks that I know are still in the area according to recent trail camera data. Hopefully, I'll get to post that deer harvest here rather soon.
Last edited: Oct 23, 2021
Reactions: finelyshedded, Mike, Big_Holla and 1 other person

Nice job on the freezer meat! Seems your self hunt video is on slow motion though. Still entertaining! Good luck with the horn hunt!
Reactions: triple_duece and Wildlife 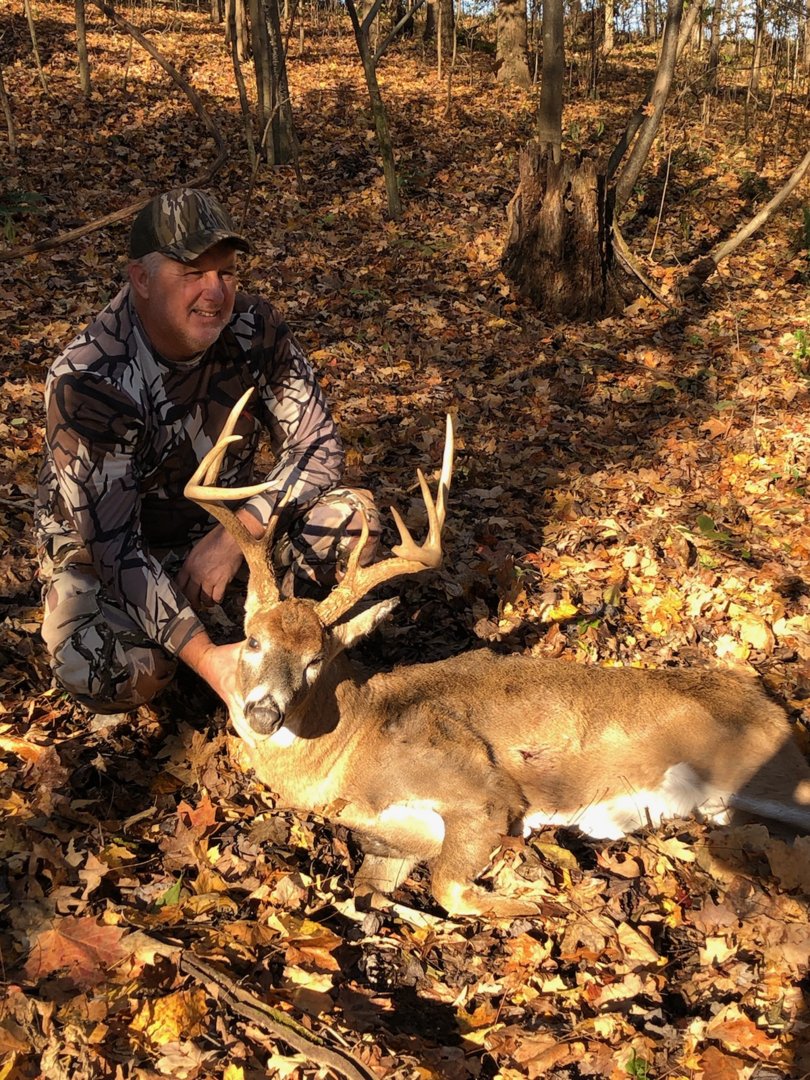 Forgot to load this one We got it done! My youngest passed her up, in hopes of the big 8 coming in shortly after her and her fawns.. he never did come so I said okay,I’m gonna take her. “You sure you don’t want to shoot her buddy??” “No dad, I want you to smoke her” so I did my best! Clean pass through. 22 yards. She didn’t make it 30 feet. Wobbled and fell over dead. After we got done high fiving and hugging he wanted to go in. He was cold so I had him take a quick picture of me with her and we drug her 150 yards with the quad to the house. She’s cleaned up, packaged and stored. Chili for dinner after washing up then back to the old grind tomorrow. I LOVE OHIO lol 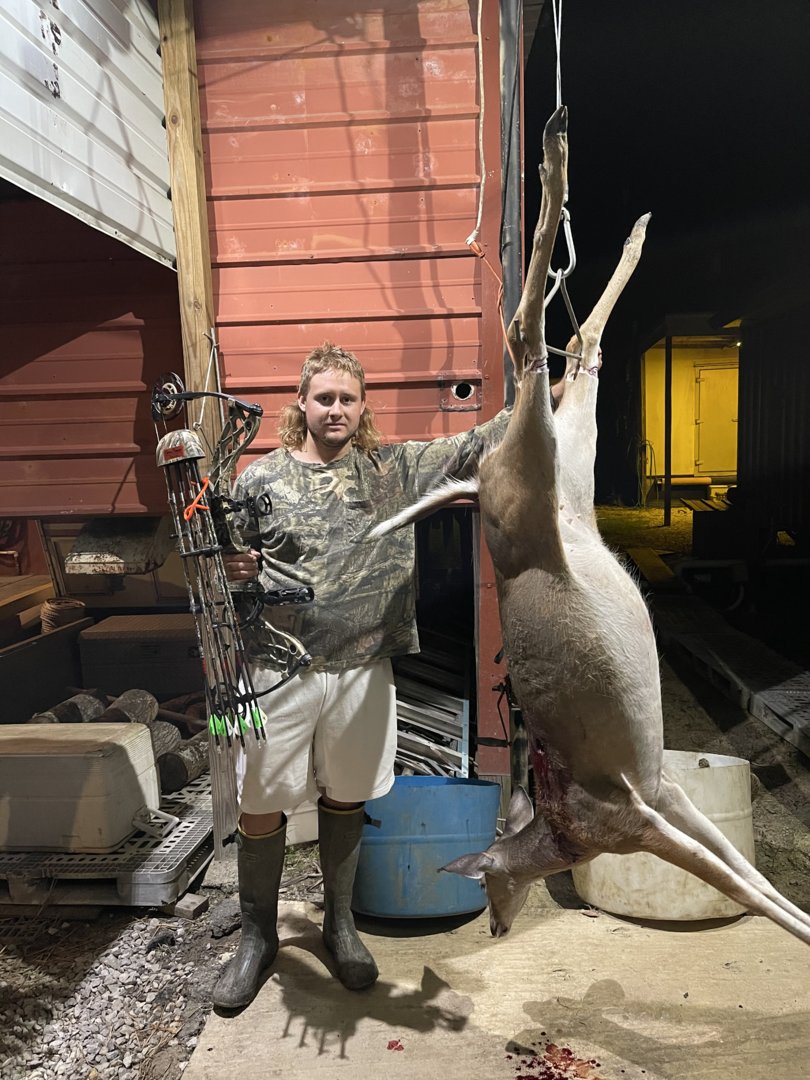 Reactions: Mike, hickslawns, Stressless and 20 others

Reactions: Mike, hickslawns, Gern186 and 13 others 11/05/21 the harvest of “oak”! Shot was fired at 6:15pm. He was recovered about two hours later. 80 yard painted blooded trail to his body. Was unsure of the shot at first so I backed out, even though there was blood everywhere. Entrance at 4th rib back, buried through the bottom of heart and broadhead stuck in opposite side. 1 3/4 laceration to heart and lungs were smoked. Biggest deer of my life, first ohio buck, and definitely won’t be the last! Reactions: triple_duece, Wildlife, Mike and 5 others Reactions: finelyshedded, bigten05, Gern186 and 10 others

Well folks it finally happened, she got it done yesterday and I'm still shook up about it. My little Abigail "8 year old" killed her first deer yesterday and it was a nice buck to boot. She has put a lot of hours in with me and it all payed off.
I have 2 spots set up for her at the house and she wanted to try our brush blind yesterday. Our box stand has not been producing this year and I think she wanted a change of scenery more than anything so off we went. We got settled in and made sure she was comfortable and could move around enough to shoot down a lane that these deer have been crossing on camera. Not very long into the hunt squirrels we're everywhere in the white oaks but I could hear a deer closing in quick. I didn't mention it to her I just shifted the gun around and she gave me the look as I watched her perk up. I'm scanning, scanning, scanning "limited sight on the ground in there" and boom 40 yards he is right there! Buck was walking straight to the lane so I told here to aim on the other side of a big root ball that he was walking behind. He stopped behind the root ball and she stayed steady. As soon as he went mobile she was on him.
The deer took 2 steps into the lane and stopped as I whispered "take him". Guys I have never had words ring in my mind like this but the proud dad moment was overwhelming.....I told her to take him, the hammer was backed, and I hear my baby girl whisper to herself "smooth steady trigger pull" followed by the thunder from the old CVA 50 cal. He buckled and stumbled off as we sprang into action on the reload even though he didn't make it 20 yards before expiring.
The adrenaline and emotions were flowing and the text immediately started going out with people replying ready to stop what they were doing to come help. She was so excited and ready to see him as well as I but she understood that even though he went down we needed to give him time. After a few minutes we snuck up the lane and could see his white belly right where he went down. We still followed through with the track job just for training and she finally got to put hands on. We hugged and high five and took pictures but most importantly we both got down and gave thanks to the good Lord. Thanks for the ability and opportunity to spend time together in the outdoors, thanks for the quick clean kill, and thanks for the wonderful meat to eat on.
I have stressed to her all season that her whole year of hunting can change in the blink of an eye. Yesterday was a clear view of that. We got him out of the woods and back to the house when she asked if she could get it mounted, as if I could tell her no. She is the most humble kid when it comes to herself and of course I will get it mounted for her. Once she helped me get him caped out she filled out the cooler tag by herself and said she wanted me to slice the loins, do cubed steak, and grind the rest with beef fat. I have to say, I like her style.
Yesterday was something I was like nothing I have hever experienced and if I can encourage any of you to do one thing, take a kid hunting.