finelyshedded said:
I got more birds nesting on or just off the house this View attachment 152220year more than ever! If they ain’t nesting they’re attacking my side mirrors……STILL!!!!

jagermeister said:
I’ve got a feeder and suet cage in the front yard. Problem is I’m terrible at keeping them fully stocked, though. I really need to buy a pellet gun… we are completely inundated with House Sparrows here.
Click to expand...

The sparrows have taken over my pavillion in the back. They shit on everything (my trailer, smoker, picnic tables etc...) and build nests all over the place. That is going to end very soon. I am picking up a Henry Garden Gun this morning. I have been wanting a smoothbore .22 for quite awhile and just haven't run across one for sale used.
Reactions: jagermeister, Big_Holla and giles

We had a couple Orioles show up by the hummingbird feeder, so of course Amazon delivered a Oriole feeder the next day after I showed Kristi this thread LOL.
Reactions: jagermeister and Big_Holla

Big H said:
We had a couple Orioles show up by the hummingbird feeder, so of course Amazon delivered a Oriole feeder the next day after I showed Kristi this thread LOL.
Click to expand...

My wife is obsessed now with them. Never had so many oranges in the fridge or the new feeders that just arrived with a box of grape jelly!!
Reactions: Sgt Fury
C 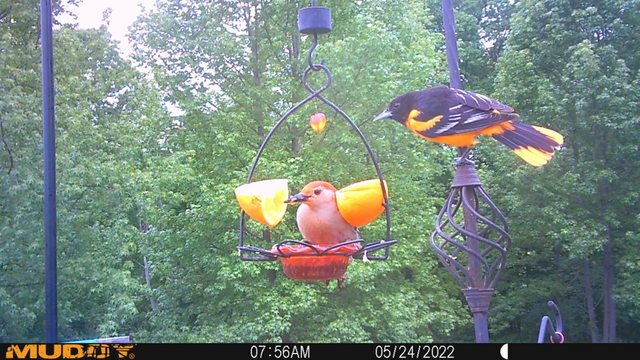 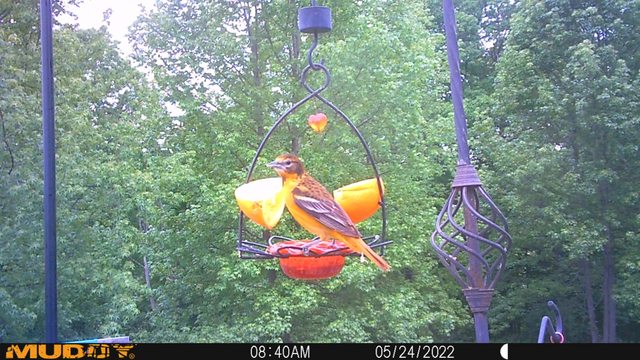 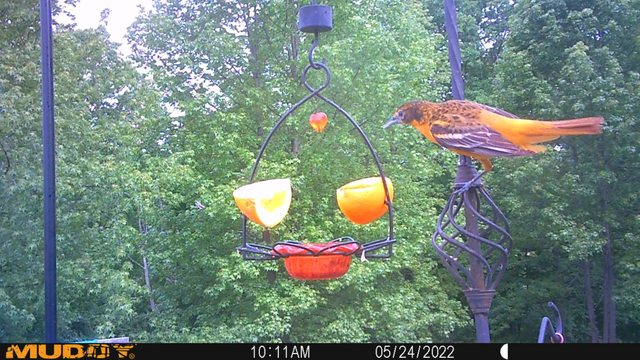 They still love that watered down jelly. Funny thing, we have a nectar feeder with grape nectar in it...they don't touch it. 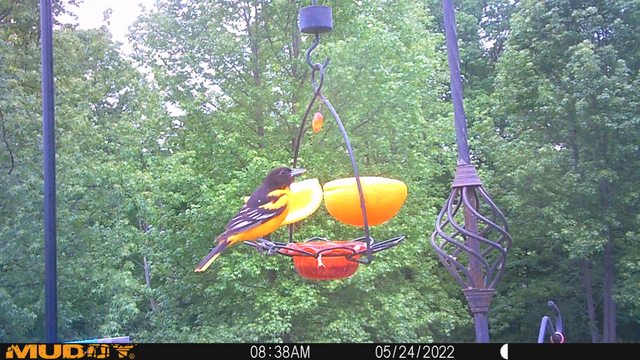 You name it and we've most likely have had them on the property at one point or another.

The wife puts out humming bird feeders every year and I used to feed the smaller wild birds right behind the workshop, but I don't anymore because of all the weeds that get produced throughout the yard from all that birdfeed/seeds the birds drop or shit.

The other day, we had a coyote cruise straight through the yard midday.

Daily we'll have Squirrels, Chipmunks, Ground Moles, Cottontails, Raccoons, Opossums, Snakes, Frogs, Deer, Cats, both domestic and feral, plus the occasional Coyote, Fox, Bobcat, Mink and Woodchuck that will make an appearance every now and then.

While leaving this afternoon, there was a Woodchuck right next to the driveway.

With regards to the bigger wild birds, we get Ducks, Geese, Blue Heron, Pheasant, Grouse, Pilea Woodpeckers, Turkey Vultures, Crows, Hawks, Owls, Eagles and of course, the Wild Turkeys as well. They're making a comeback.

Just before spring Turkey season this year, while walking out my workshop one morning, there was a big bearded Tom cruising right through the yard just yards away from where I was standing.

There's a Jake that shows up at the feed station almost daily, typically twice a day, morning and/or mid afternoon. He's a regular visitor, and the Ducks disturb the Deer often because they show up at sunrise and sundown, just like the Deer do everyday and they make the Deer nervous.


Anyways, that's what we have going on around here pretty much all the time this time of year and I'm sure I left out some of the more rear species. however, if there's an opportunity to get any of them on camera, I'll share those too sometime in the future as well.
Last edited: May 25, 2022
Reactions: Creamer and Sgt Fury No idea what the "lemon slice" is growing there but the hard wood seems to be doing fine growing from the old pine stump
Reactions: Creamer, Sgt Fury and Wildlife

This past weekend we were chilling out back and my wife got spooked when she saw this guy slithering towards us about 10 feet away. It tried escaping into a crack under the spa but it’s meal wouldn’t allow it. Lol
I hope he sticks around to eat every dang one of those chipmunks I’ve got living around our house. Lol 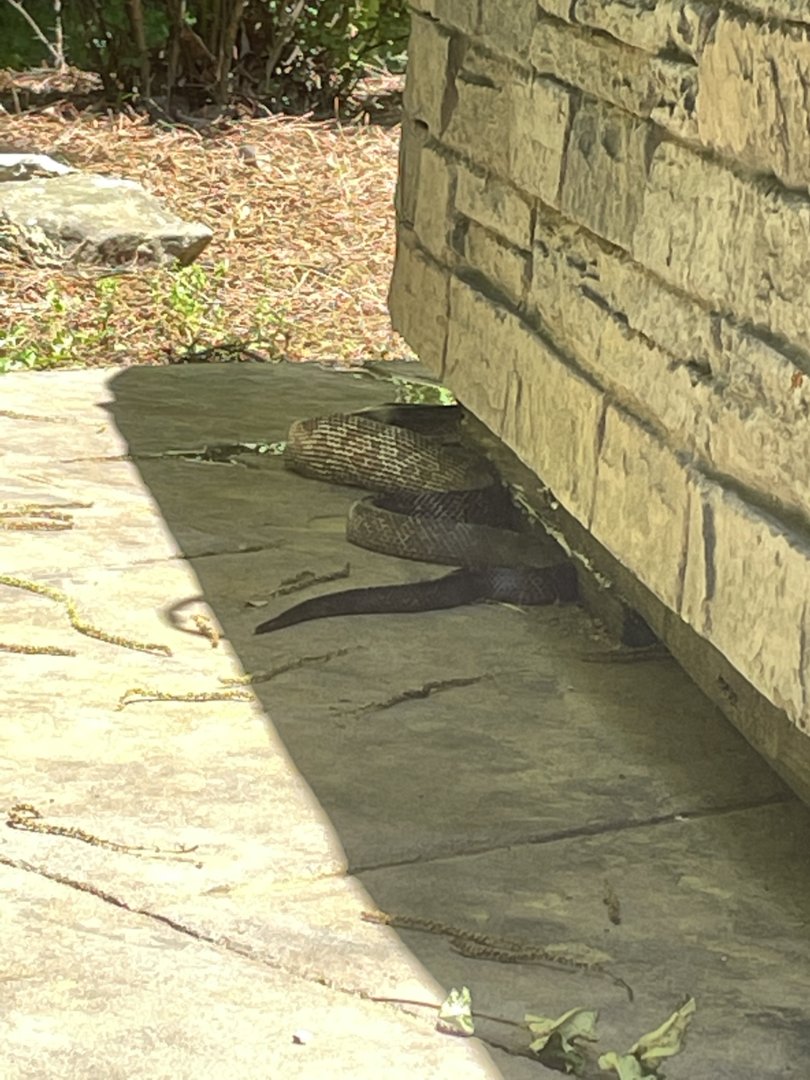 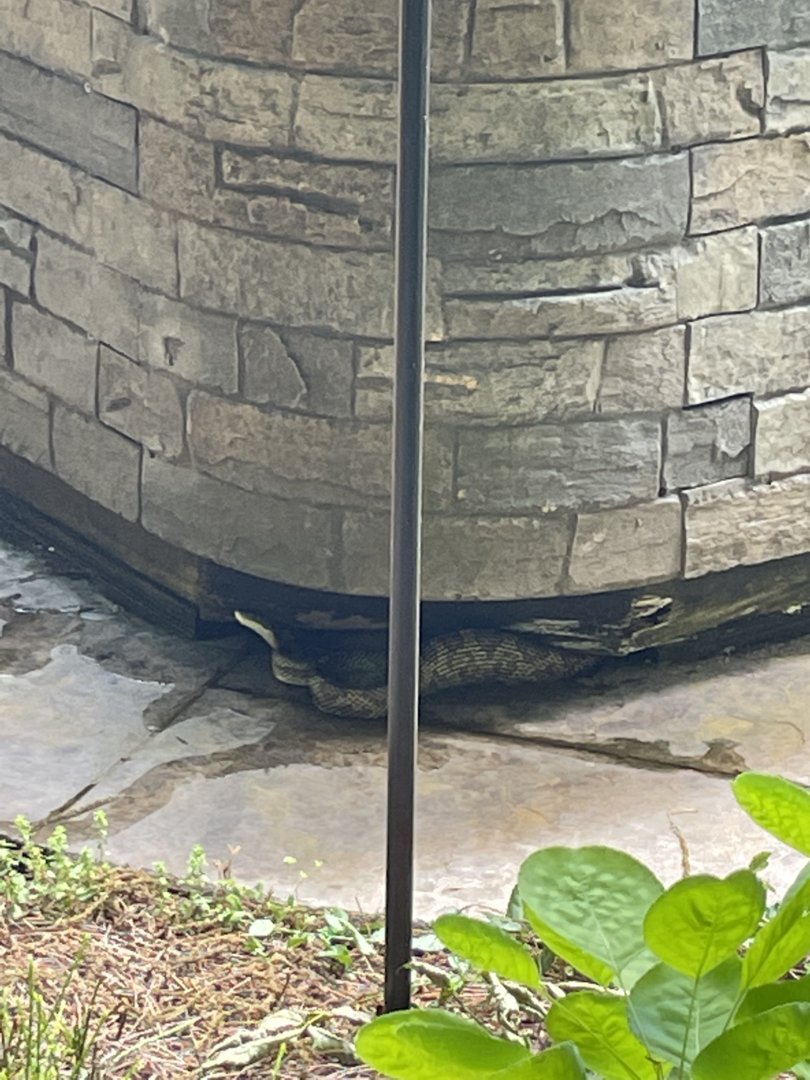 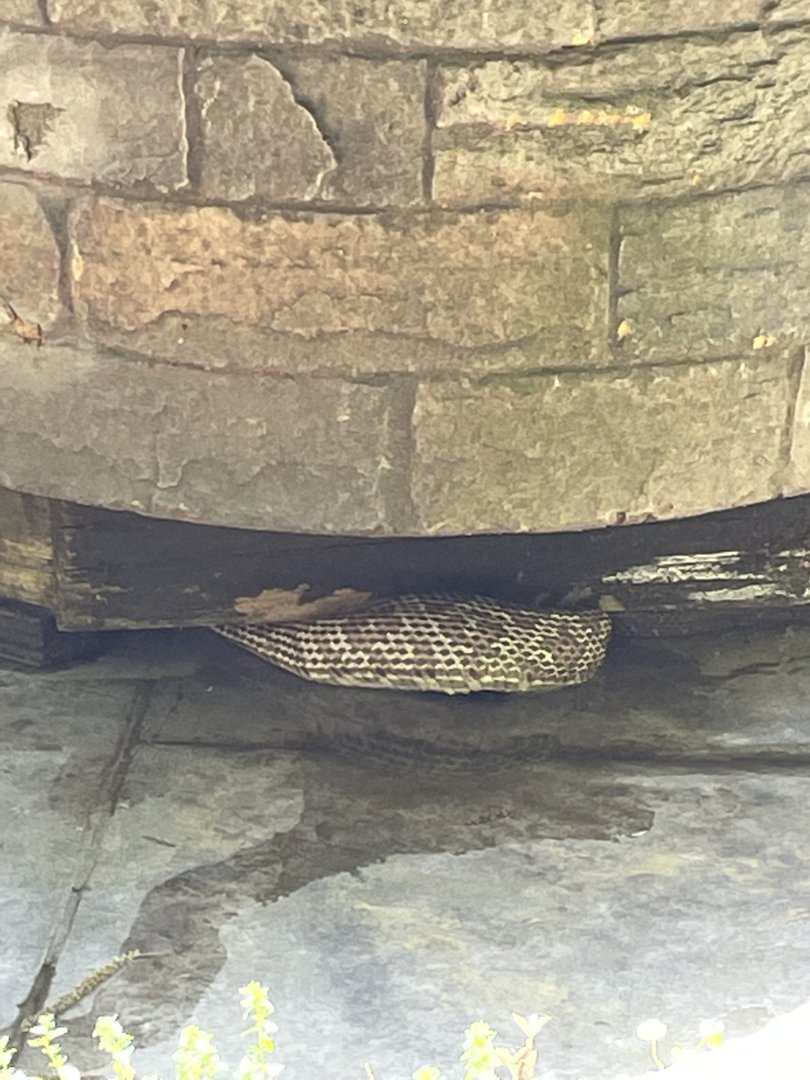 My wife loves hot-tubs but seeing him there she would light that F'er on fire!!
Reactions: 5Cent, GoetsTalon, Sgt Fury and 3 others

No, even though I didn’t see it all stretched out I’d say conservatively almost 5’ but I saw a 6.5-7’er around my water boiler a few years back so they’re out there.

finelyshedded said:
No, even though I didn’t see it all stretched out I’d say conservatively almost 5’ but I saw a 6.5-7’er around my water boiler a few years back so they’re out there.

Regardless, that’s a well fed snake! Biggest one I’ve seen around the compound is 3’.
Reactions: finelyshedded

We’ll shit…,got 4 of these fuggers under the shed. My dog is gonna have a hay day! 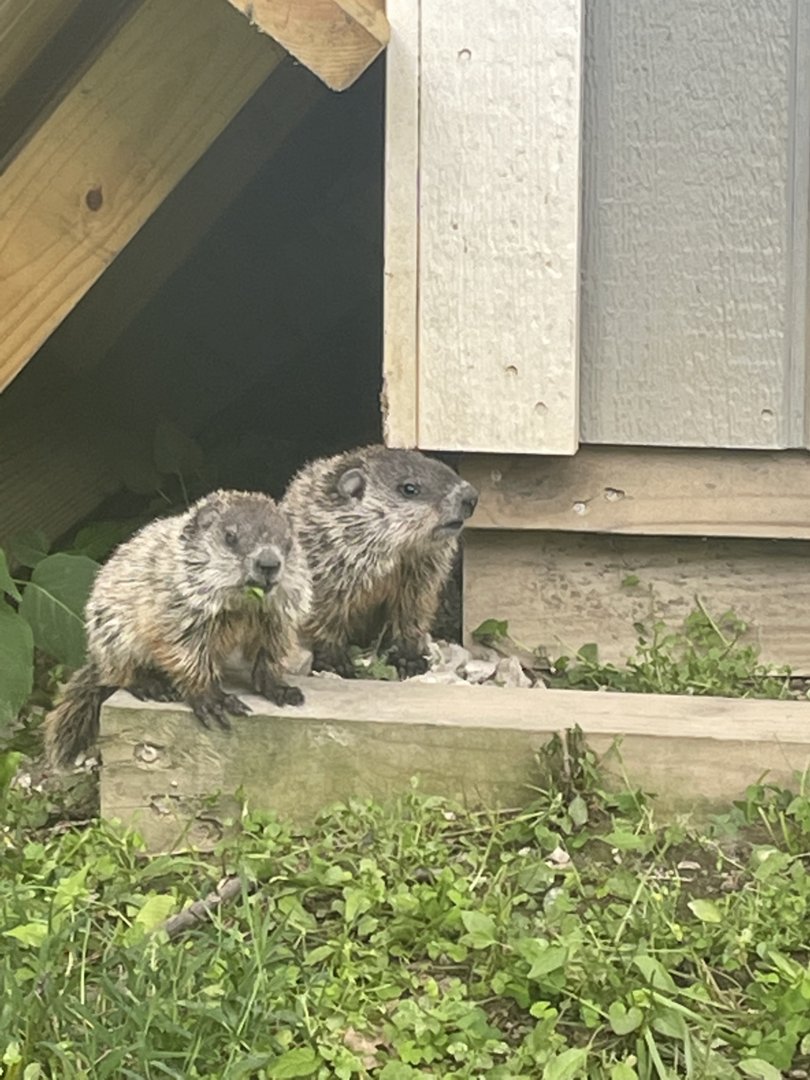 Reactions: Creamer, Wildlife, 5Cent and 6 others

Smawgunner2 said:
We’ll shit…,got 4 of these fuggers under the shed. My dog is gonna have a hay day!View attachment 153301
Click to expand...

I've seen more this year than I have in a long time.
Reactions: GoetsTalon and finelyshedded 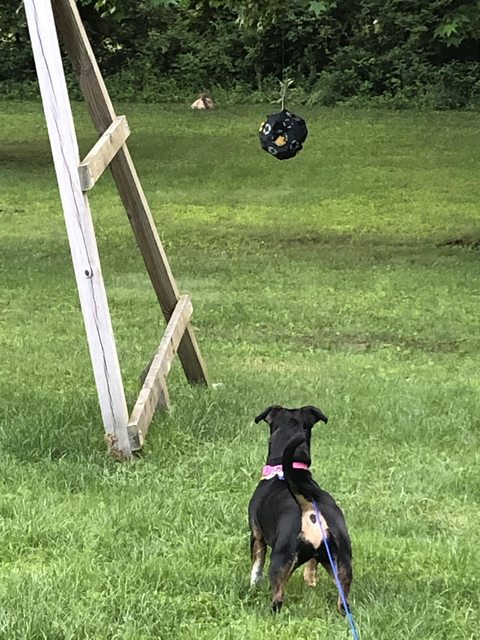 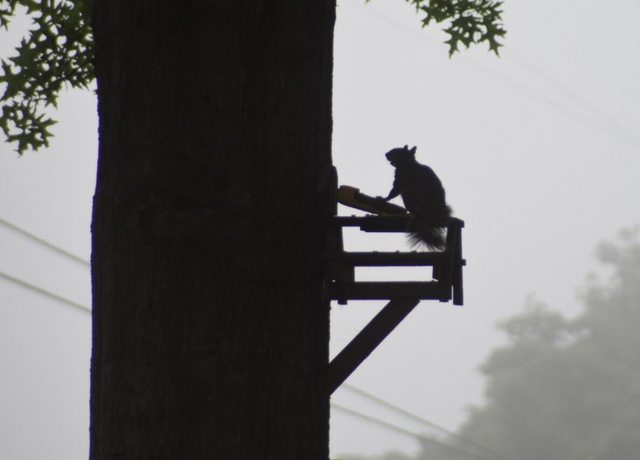 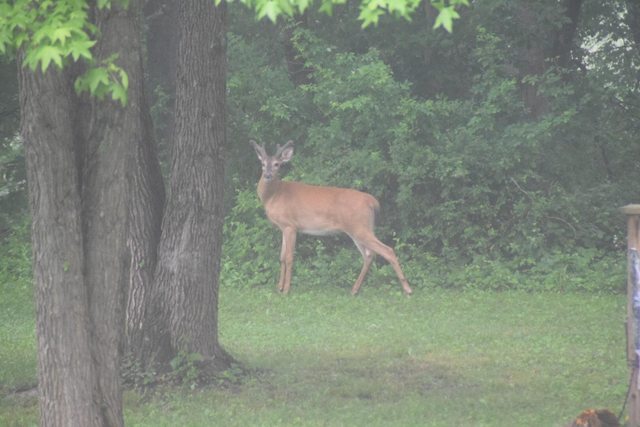 Male Baltimore oriole from a few days ago. 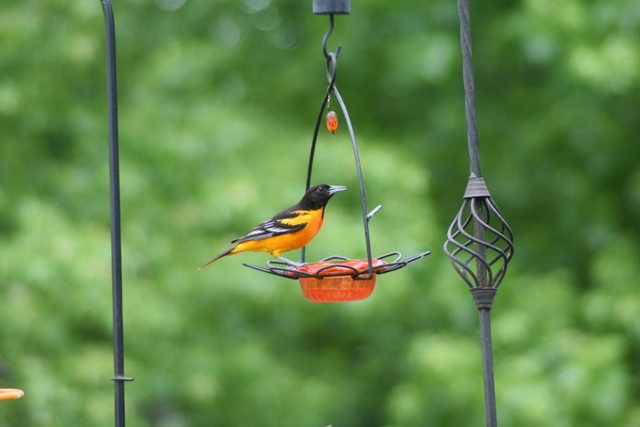 This one is new for us here, a female Orchard oriole. A juvenile male came in yesterday (and one other time), too, but I didn't have the camera at the table with me. 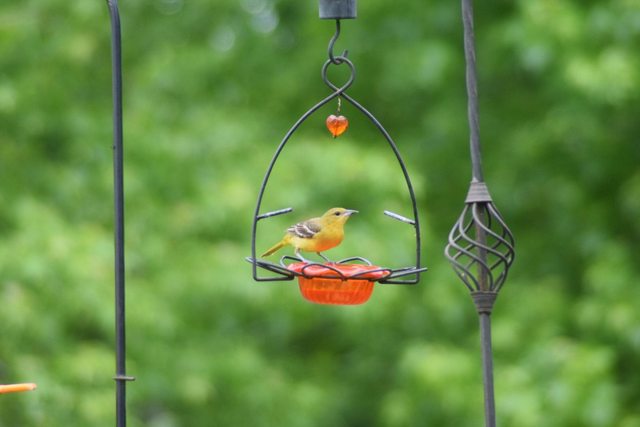 So, I've been staying up past my bedtime the past couple of days trying to catch up with the coyotes that have made their presence known lately. I mentioned in the previous post within this thread that we had one cruise through the yard midday a week ago. I suspect that they're trying to hunt down any of the newborns in the area.

I have an auditable driveway monitor and trail camera setup that covers our driveway and it always detects any deer, predators and critters that make their way into yard every evening.

Here are a few of the latest TC captures of the coyotes in our driveway over the past week in the dark. The third one, you have to look closely because there are two of them in that photo. 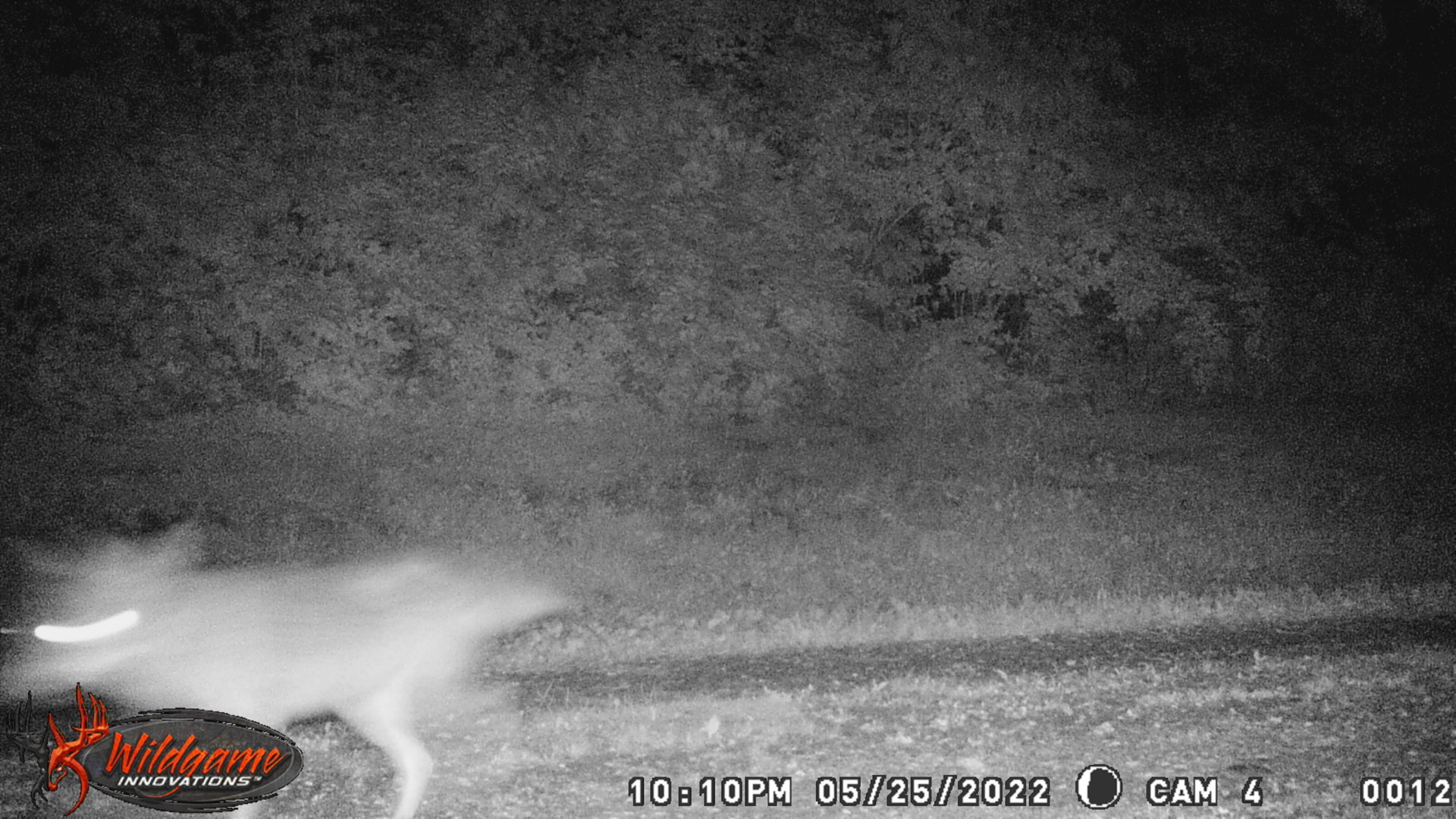 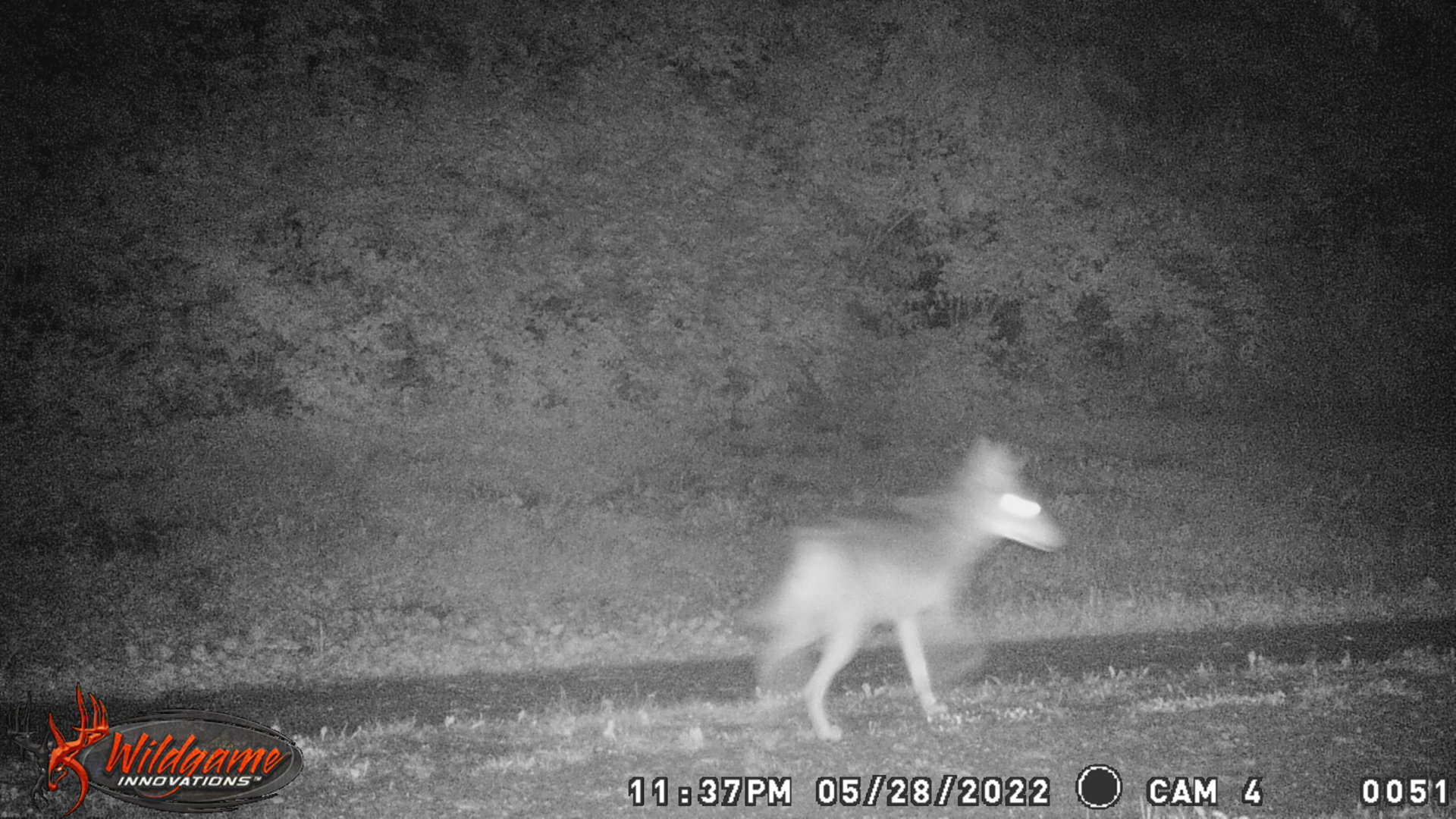 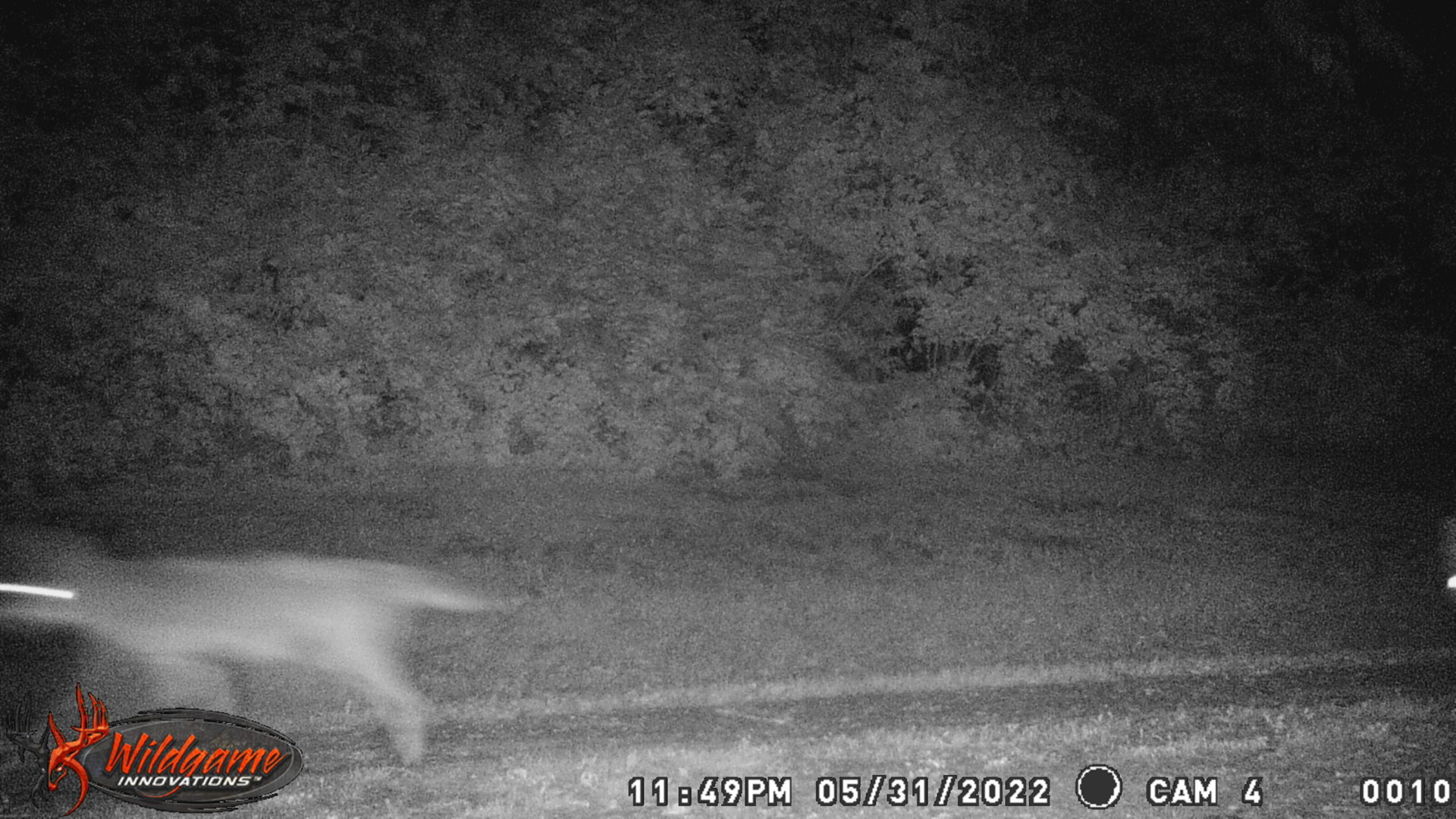 Below are a just few captures of some of the critters in the yard when I took the rifle out on a couple of occasions over the past few days. There were plenty more that I did not record.


Anyhow, it'll be a matter of time before I do catch up with those yotes and trust me, it'll happen, then I'll share those messes afterwards.
Reactions: Isaacorps, GoetsTalon, finelyshedded and 1 other person

I erected this PM bird house about 3 years ago and take it down in the fall and back up around mid to late May. Other birds like Warblers, Blue Birds and Wrens that arrive early and start nesting earlier than our local Purple Martin families have also taken residence in it. So far I have just one pair of martins using it regularly but I’ll just keep putting it up later and later AFTER these other species have nested hoping to get closer to the PM arrival date so I have nothing but Martins living in it.
I can’t believe I transplanted the 3 Pin Oaks out there to the left of birdhouse about 2007. They were same size as those fruit trees I just planted a month ago. The birdhouse sits about 18-20’ high. I’m contemplating on hanging my bat box in one of those trees cuz they receive a lot of sun for warmth and we can watch the bats from a distance and not risk bringing them closer to the house to hangout. Lol 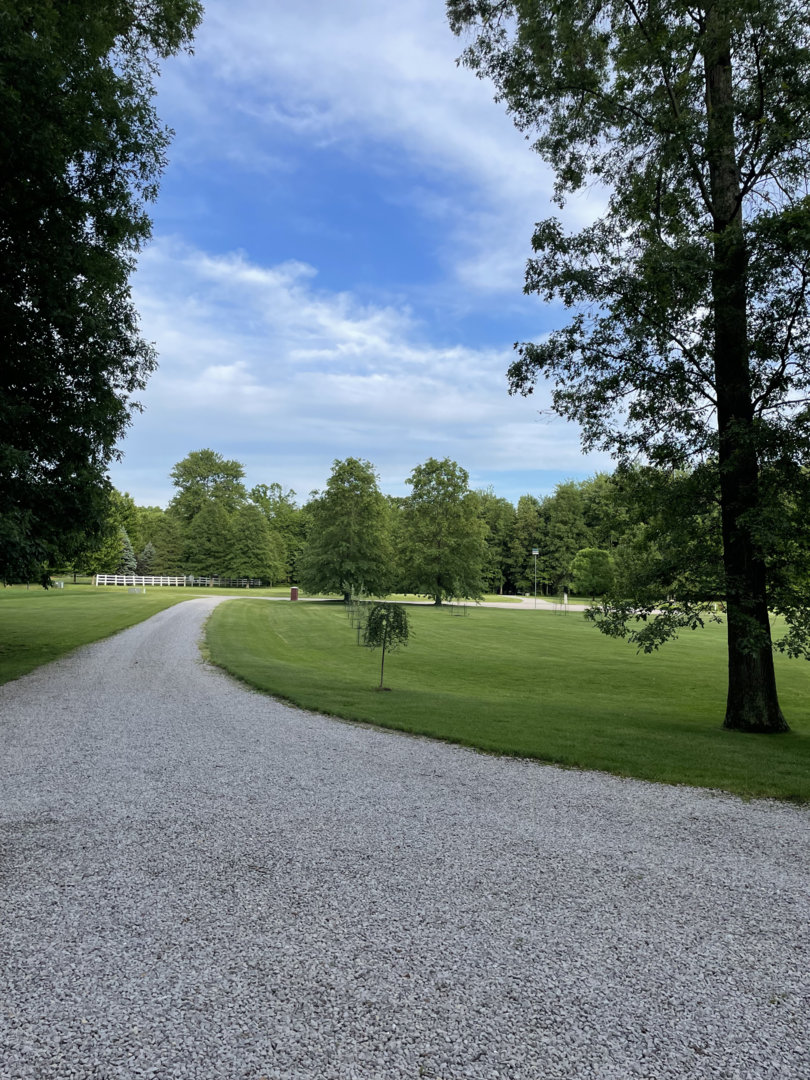 Just got the bat box hung. Had to do some trimming, dang these pin oak limbs are knarly and unforgiving! Lol 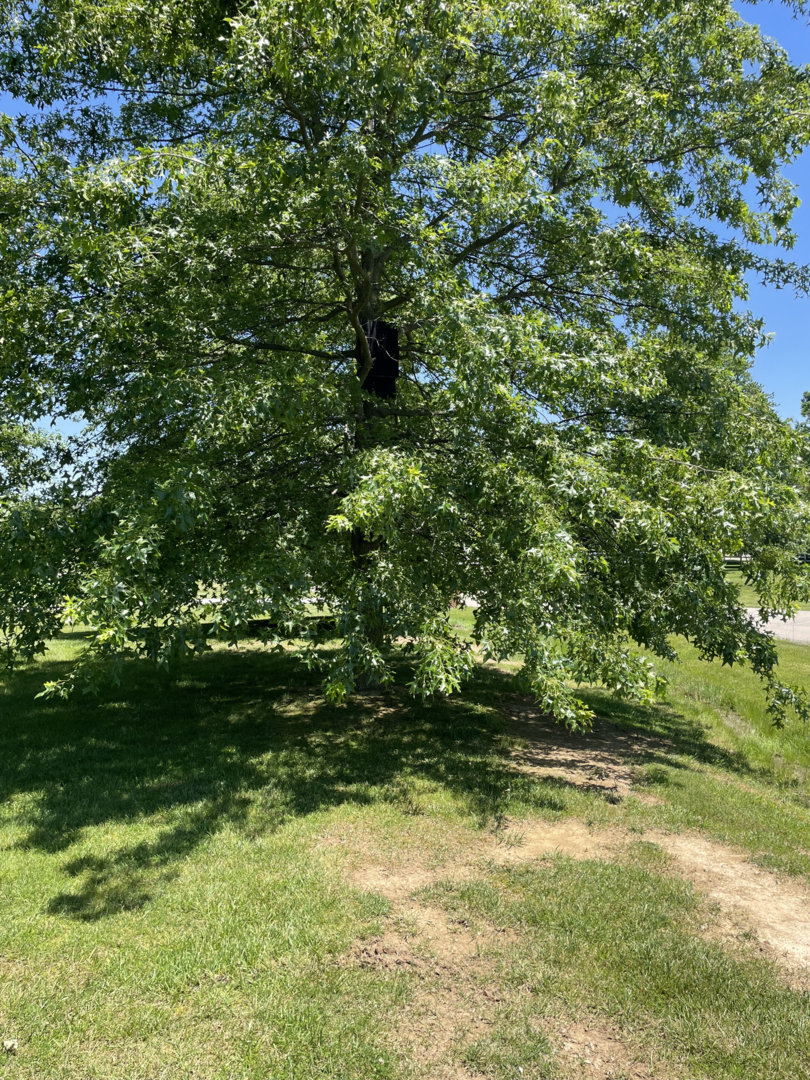 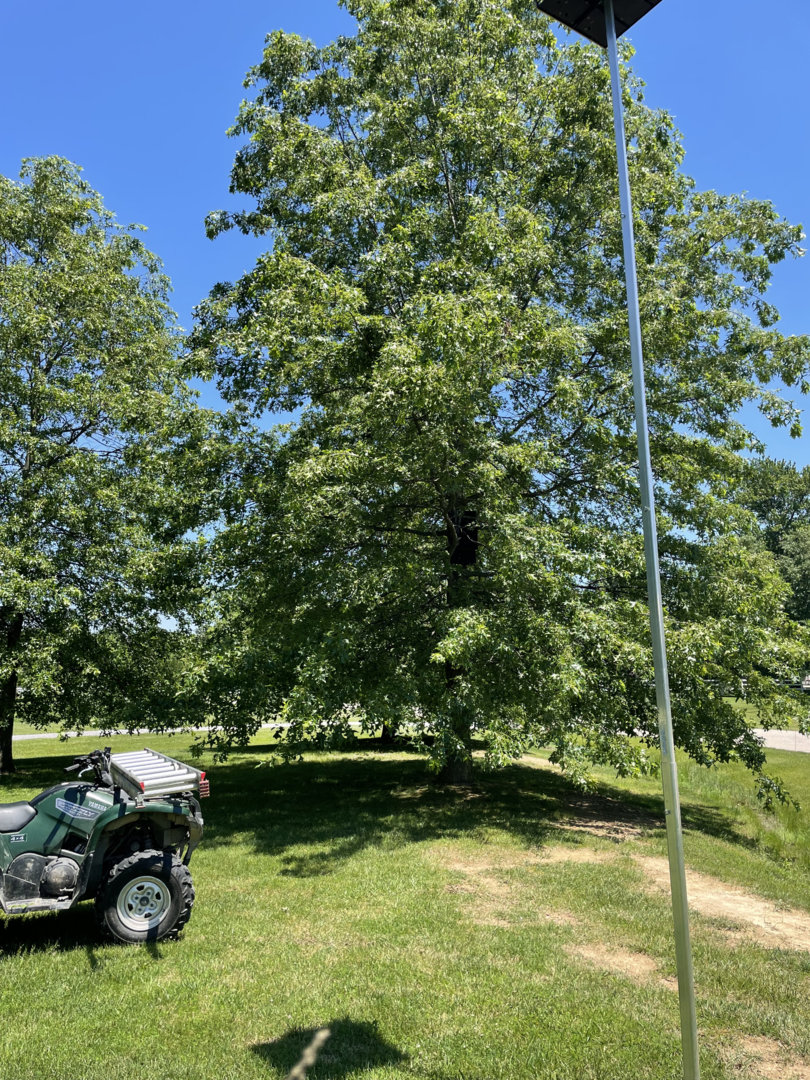