You guys sure know how to have fun
Reactions: brock ratcliff

I joined Jamie and Uncle Charley today for a few hours of squirrel chasing. Squirrels were not much into participating today, but Charley shot one and Lefty, the super dog, killed another. They had killed four prior to my arrival.
Mason went out in search of a doe. He took my dad’s old recurve in hopes of getting that elusive first trad kill. Not having a buck tag, bucks were the only deer drawn to his set up. Typical.

. We’ve known these three bucks since this summer. I believe two of them are two year olds, but one of them is a 140 class deer already. He doesn’t carry a birth certificate of course so there’s no way to say for sure, but he sure is young in appearance and will be a great deer presumably next season. Mason took some great video that he’s uploading to YouTube now. I’ll post a link when it is done. For now, some pics... these deer were as close as four yards, well within his recurve range. He decided to climb down after the bucks left with plenty of shooting light remaining and spooked an incoming doe. I asked him why he quit early and he said he’d already had a good hunt and if he’d have shot a doe it would have just been a mess... my boy 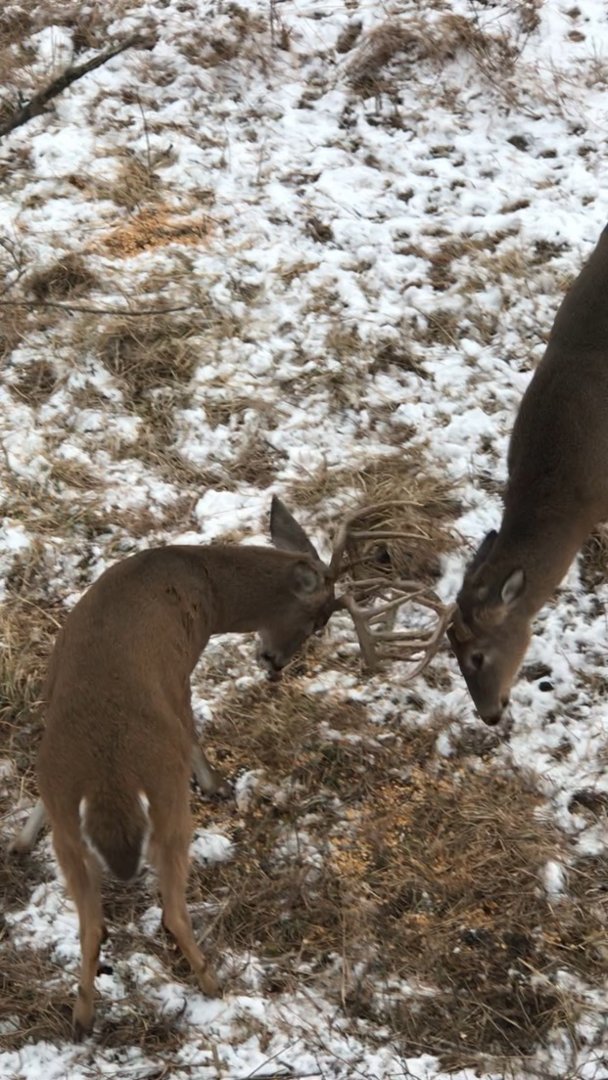 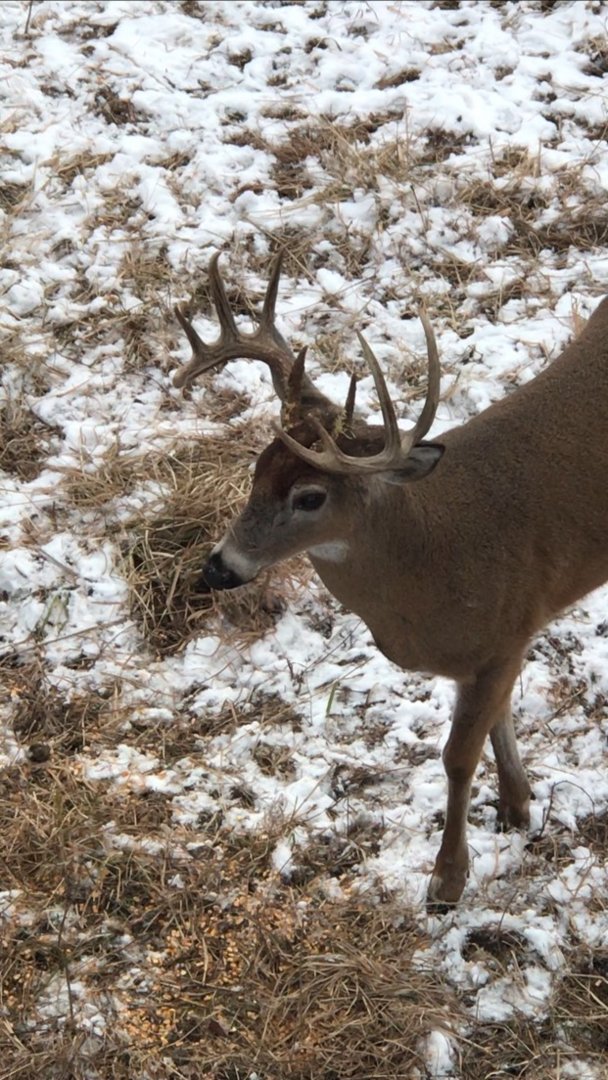 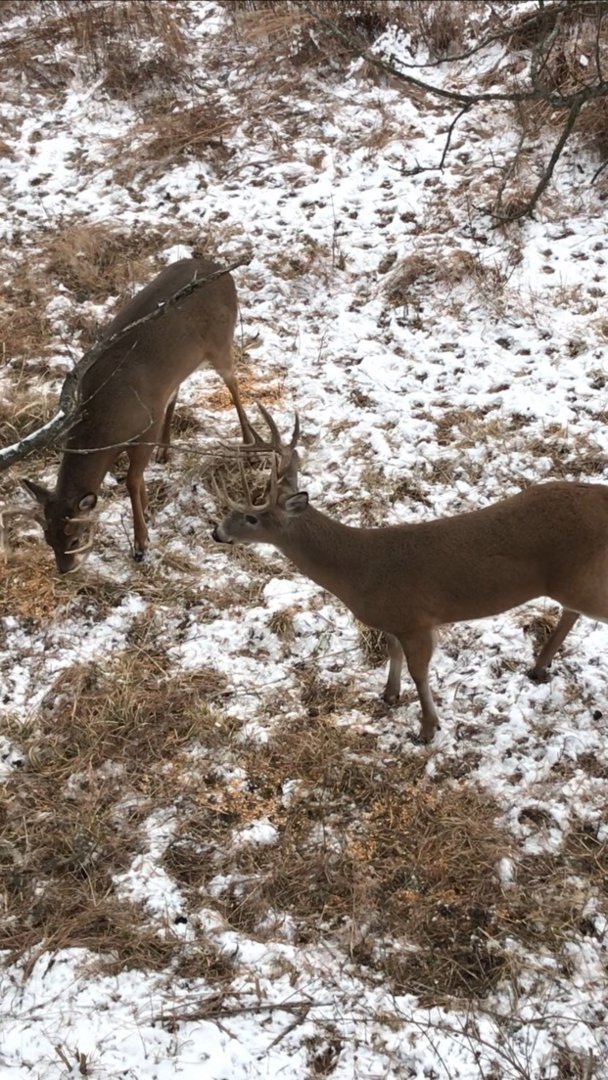 This guy is the one under Mason tonight. Hopefully we will get a look at him next year. 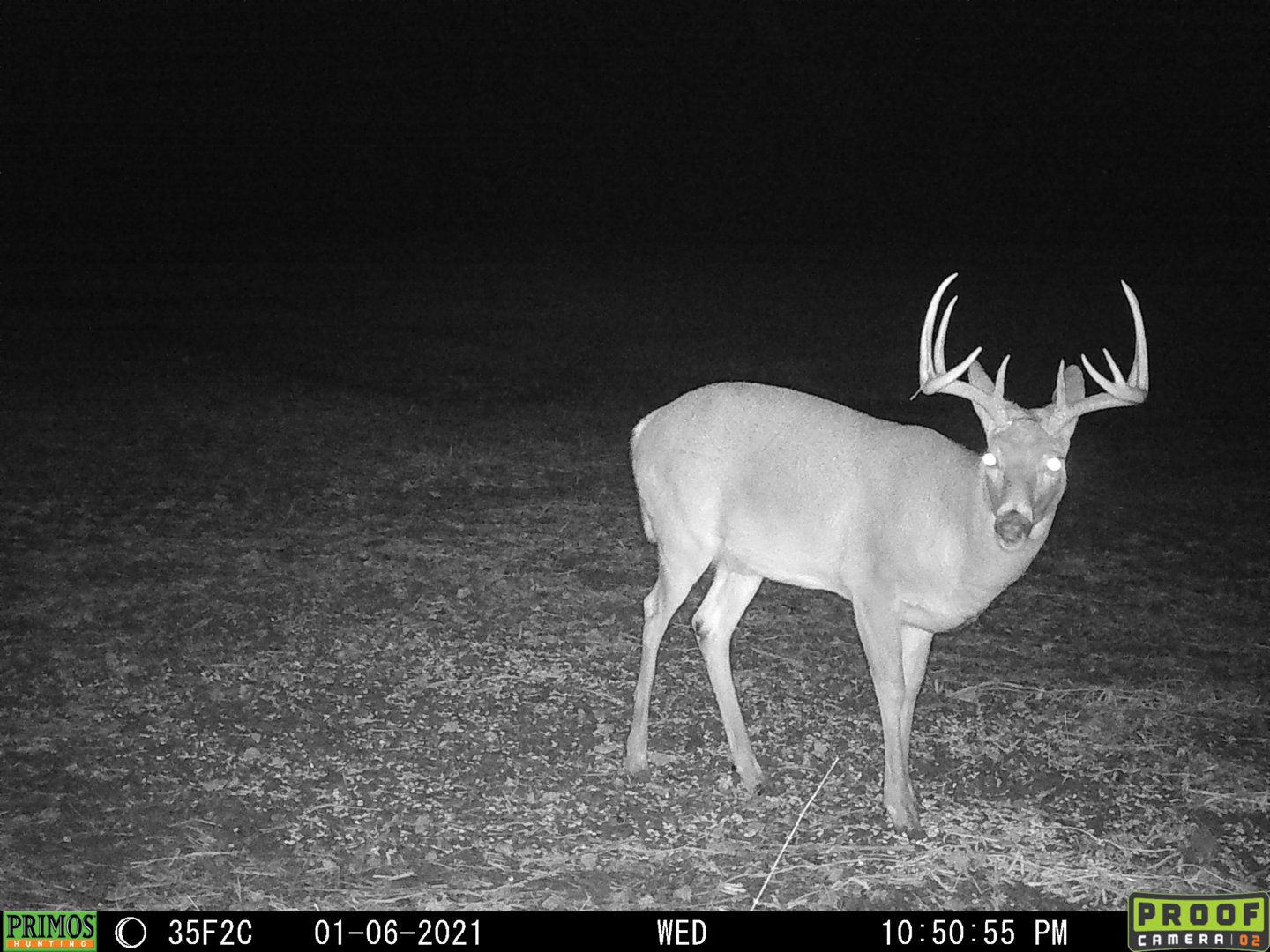 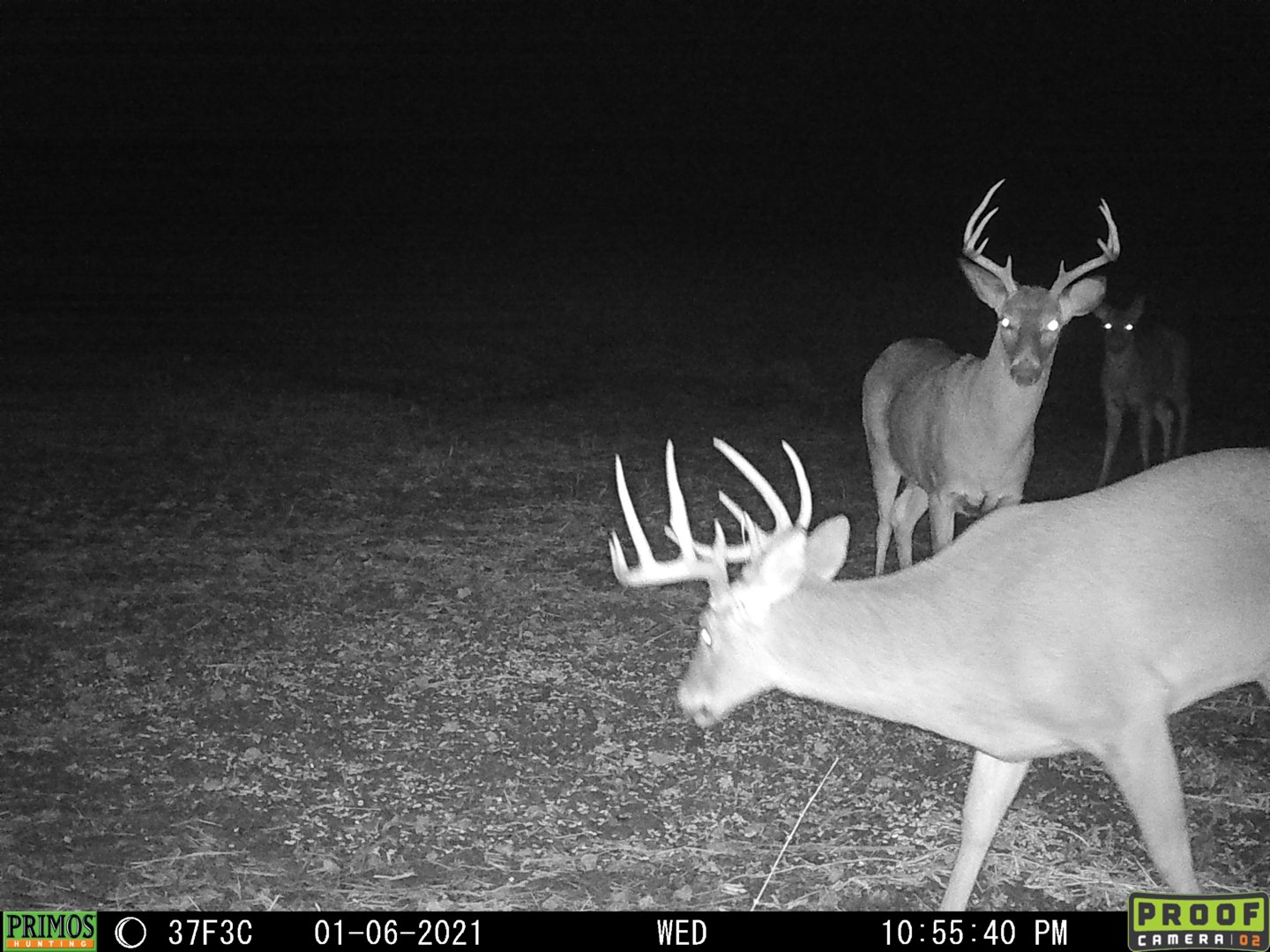 Absolute slammer of a young buck Brock. Always love reading of Mason and your adventures.
Reactions: brock ratcliff and finelyshedded

Definitely an up-and comer!! Great night time pics of him. Hopefully you guys will be able to find his sheds.
Reactions: brock ratcliff

What a young STUD!!

Brock - I also need to borrow the "all the fun, no mess" for next season. I am not sure I have related to a saying more in my life, fantastic!
Reactions: brock ratcliff

Be fun to see what he grows into next season Brock.
Reactions: brock ratcliff

Boarhead said:
Be fun to see what he grows into next season Brock.
Click to expand...

I agree. Mason gave me heck for shooting that young buck during gun season and pointed out that we would find a good one for me to hunt before season end. Last night he showed me the video and said something about me not being able to go hunt him. He missed the point entirely... every deer we know about close to home is going to be better next year. I’d really feel bad killing a young one we know that could turn into a great one. That young one I killed was on a piece I’d never deer hunted and may never deer hunt again. I’d much rather shoot a “stranger” than to kill one I know I may see reach his potential. This guy is definitely a home boy too. He’s always on cam and we’ve seen him several times. And I’m betting next year he will be far better.
Reactions: hickslawns, finelyshedded, Fletch and 5 others

Here is the video from last night.

That was great! He sure had the drop on em for plenty of time for a shot.That bigger buck looked up and that was it, game over.
Reactions: brock ratcliff

Awesome video from a young very well seasoned and ambitious young man. How many hunters regardless of age or skill would still be out there having fun after killing a MEGA buck of countless of lifetimes just a few short months ago?!?!

Brock, I can imagine how proud you are of Mason because I am too.

That young buck will be a slob next year because I think he’s got the IT factor as well. It’s funny, two “ITS” so close together but one is in the tree and the other is below the tree.

My buddy Steve drove over today from circleville to hunt with me. We haven’t hunted together for nearly 30 years. Mason joined up with us after we had been out for an hour or so. He was late because he was out dumping corn and checking cameras.

The rabbit hunt was not spectacular but my hounds did run one on a long track that brought the bunny right back to Steve’s barrel. A good time for all but the rabbit.
Reactions: OhioWhiteTails, Isaacorps, giles and 9 others
S

Great video
He is all about hunting
I am certain he makes his father very proud!
Reactions: brock ratcliff

We shot indoor 3 D yesterday at Ross County. Mason is usually at the top of the leader board down there, yesterday he wasn’t even close. He’s been beaten by the same person three times this winter but yesterday was not even close. Granted, he’s not been putting in the work like usual due to baseball and the fact he’s still hunting, but he still shot a respectable score of 210 on 12 target. That’s with a couple of 8’s that were within an 1/8” of the 12 ring. What we saw yesterday was a butt whipping that was just fun to see, the kind of shooting I have never seen at the club. The best part is that the whipper was a 16 year old girl... and she shot amazingly well. She wound up with a 234 on 20 targets... the three 12 rings she missed were not missed by much either, they were the type misses that required a very close look at the lines to call. This kid is the real deal! Masons buddy Caleb and my old trad shooting buddy Steve joined us too so along with the regular group of guys at the club, we had a great time. I’m amazed by these kids and their shooting. I have no clue how they know exactly where those 12 rings are on the target let alone to be able to drop an arrow in them with so much consistency. It’s an amazing thing to see. 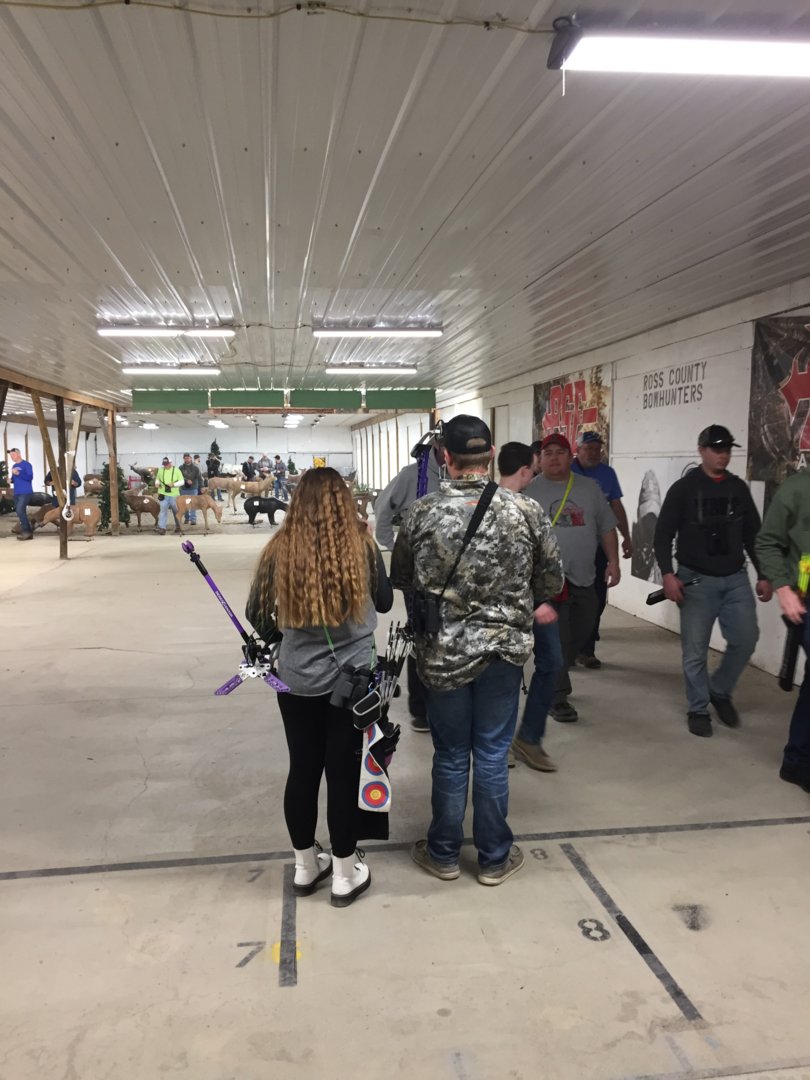 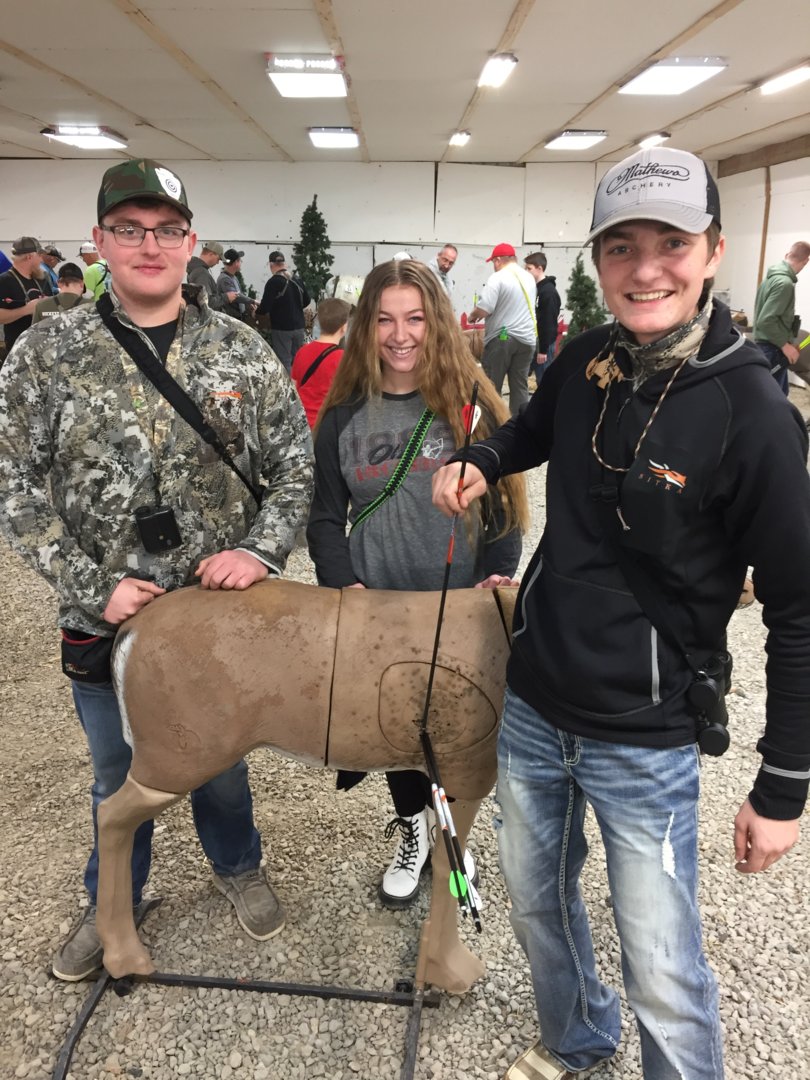 The recent harsh weather has had me feeling bad for the wildlife. Mason and I dumped several hundred pounds of corn yesterday along with a bunch of bird seed. We didn’t have any cameras up where we dumped the corn so today we went in there to put one up. There has been very little small game sign in there since we’ve had this snow but we actually saw two rabbits and a lot of tracks from the truck while fooling around so it was evident they were tired of hiding from the elements. We had an hour of daylight left when we decided to take our recurves and go look for rabbits. There was little chance of a good sneak due to the crunch snow so we did a few little drives and took a few long shots. I’ve never seen so many rabbits just out on natural movements. It was a blast. I missed five times! A couple of them were setting but they were a long shot for my recurve. Missed em both. Mason pushed three by me at reasonable range but arrows were deflected and one may have just flat missed. He missed some shots too. It was a blast! And no mess was made. We hope to take the dogs and guns in there Saturday morning. If they are out as they were this evening, my guess would be there will be a bloody mess.
Here is a pic of what was likely the longest shot of the day. All was perfect except I shot a little low. Neither the rabbit nor me were terribly disappointed in my shot. 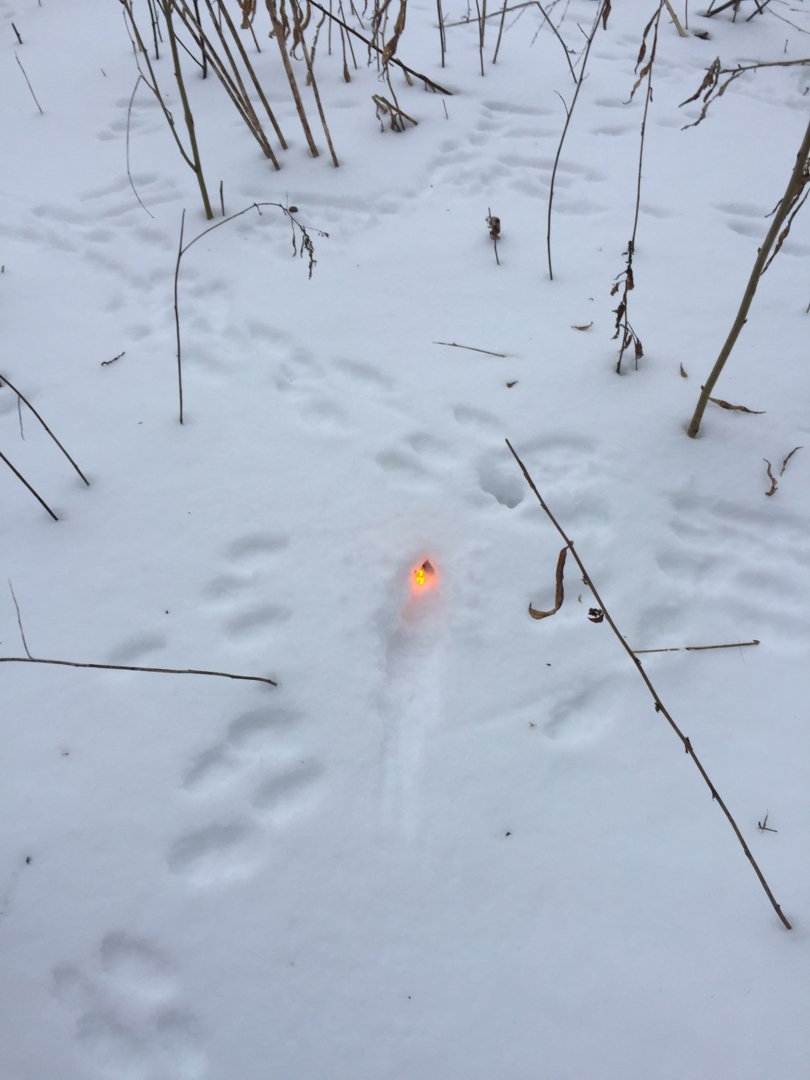