I hope I don't open a can of worms here, but the articles have been appearing in the paper...
Today's says corn can kill the deer because of digestion issues. If the deer arent used to Corn... Yada yada yada... What's your take?
I'm not talking piles and disease. I'm talking the slow digestion death.
I've been feeding corn since Last Feb.

Did coonie write the article?

I say any deer that lives here in Ohio with a corn field nearby will be fine. I don't know about deer but I know if you change a dogs food to something they have never had it can cause havoc in it's stomach and intestines and cause some serious inflammation issues. I also know that in sheep and goats if they don't get green grass and you let them run in an open pasture with the greens they normally don't get they will eat too much and their stomach will bloat and they will die.

Deer get sick when they eat corn, yes.

Feed them walnuts instead.

I've heard this as well, but have trouble believing it. I feed the deer in my subdivision so my kids get to see them. They feed here all winter long and I get familliar with them, so I know they are the same deer. The fact that they continue coming means they are still alive and haven't did from corn poisoning.:smiley_coolpeace:

Even if there is corn near by, That is not the only thing deer eat. They browse all the time...So the greens probably aid in the digestion process.

I'm not sure what to do. Is there another option to put into a feeder?

Where I am hunting, I don't think there are any corn fields around. But, like I said, I've been putting corn out since last Feb. Have any deer died from it? Hell, I don't know. I know I haven't been able to match any bucks up from this year to last. I'm a little nervous on this one. If I can find the link for the article I'll post it.

This isn't the article I read, but it's pretty close to the same info. I'm sure this is old news to some of you guys, but I just started trying this method.
http://www.farmanddairy.com/columns/feeding-deer-corn-is-not-the-best-thing-to-do/14293.html
U

deer dont eat just corn , if they had a all corn diet yest it would kill them , but deer eat lots of different plants , so corn at a feeder is not gonna hurt them unless they never move from the feeder , soybeans is also something to get for a feeder but i dont know if you can buy just a bag of soybeans

I colected a few 5 gallon buckets worth of acorns in my yard a few months ago. They are now in the woods and the deer tear them up

I think I am going to try using beef pellets and mixing it in with the corn. I need to make a run to our feed place here, but if I remember right, the price isn't too bad.

Since the first frost, the deer haven't been hitting the winter wheat fields as much. I have been seeing them more in the picked cornfields. Guess they must be eating the stalks or dirt since they can't eat corn. lol

I think it depends on the situation. If you start feeding deer that have little natural forage and ALL they are eating is corn and have not eaten much it could cause problems. I feed corn year round and see the same deer year after year. I think under most circumstances that guy is full of shit.
I

I have used a mix of Shelled corn and Dairy Cattle Protien Feed in my feeders and I have not had any issues with the deer at the farms that I hunt. Matter of fact since I've been feeding the mix I have seen healthier deer in the woods.

I've read similar articles in the past, but I've never really noticed any negative side effects from feeding corn to the deer where I hunt. However, I don't feed year-round and I'm not really a consistent feeder either... I didn't get around to putting any corn out last year actually. So I'm probably not much help here... BUT, IMO if the corn really WAS that bad for the deer, it would probably be illegal (in all states) to feed corn. I wouldn't worry too much about it, man. I know a few guys that feed soy beans with great success, though... maybe you could try that instead of corn.
D

There's not a corn field within 10mi of my property and I supplemental feed my deer and turkey through the winter months when the snow and ice are covering up other natural forages. I have yet to see any negative effects.

I feed my gang sorta year round. Does not seem to bother them. 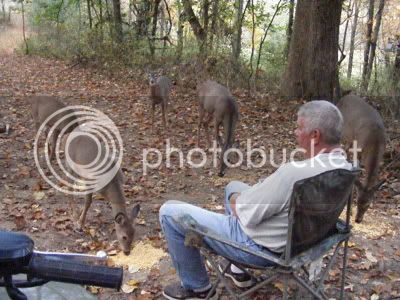