I found a new to me site that had open reed predator boards. Since I wasn't super happy with the last set I bought, I tried the new ones. I like these a lot better. Much easier to make distress sounds on, more of a distress call than a howler style reed like the last set. I thought this turned out sexy as hell. Rosewood for the blank on this one. 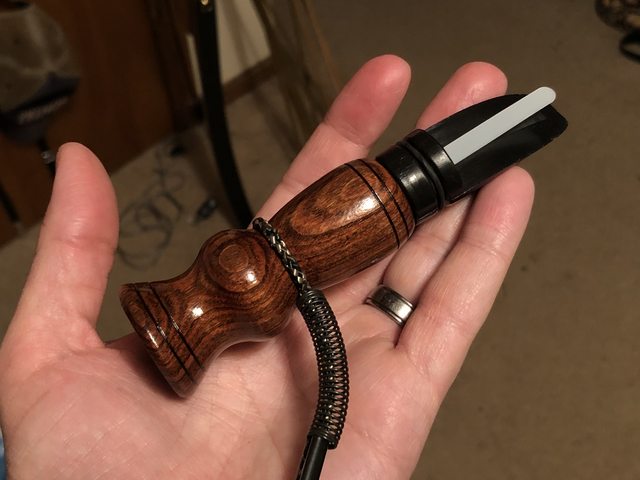 This one, just bear with me a sec. I watched several videos on the Tube about grinding quarters together to imitate a squirrel cutting. Yes, I could make the sound with quarters, but holding them and not dropping them was an issue for me. I came up with this using two pieces of scrap cherry I had leftover from other calls. 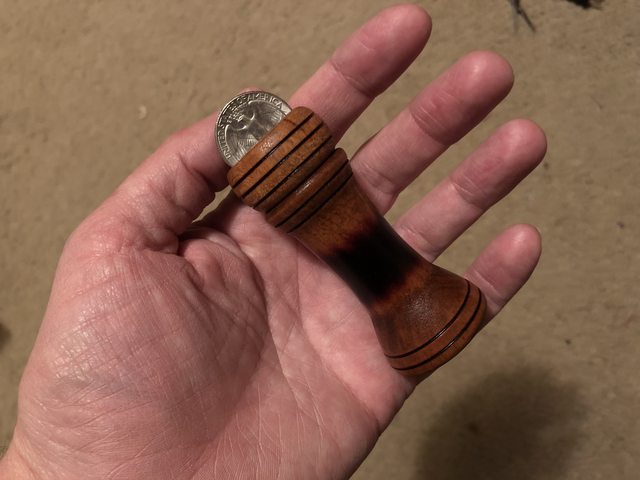 So in one end I epoxied in a quarter as the "sound board" basically. 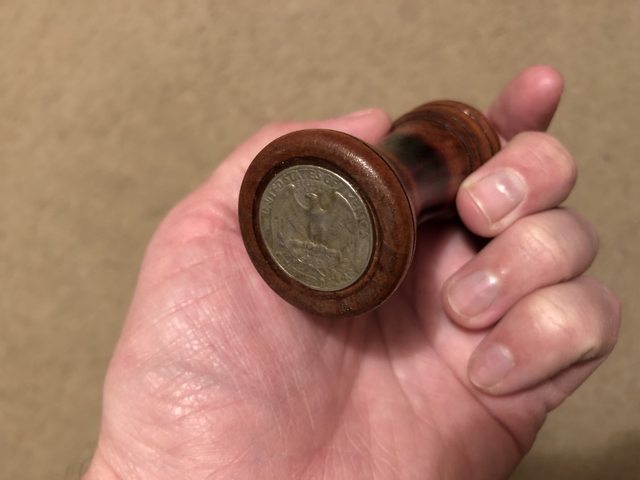 The plug end comes out and it's got the other quarter epoxied in it like so. Now you have two pieces that are easy to grip and manipulate. 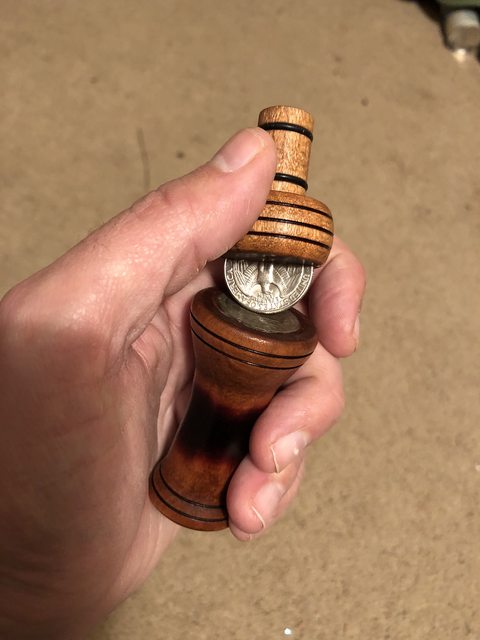 
It's not the prettiest thing in the world, basically a rough draft. This, on the other hand, looks like it will be purty when it's all said and done. It's a bocote version of the predator call above. 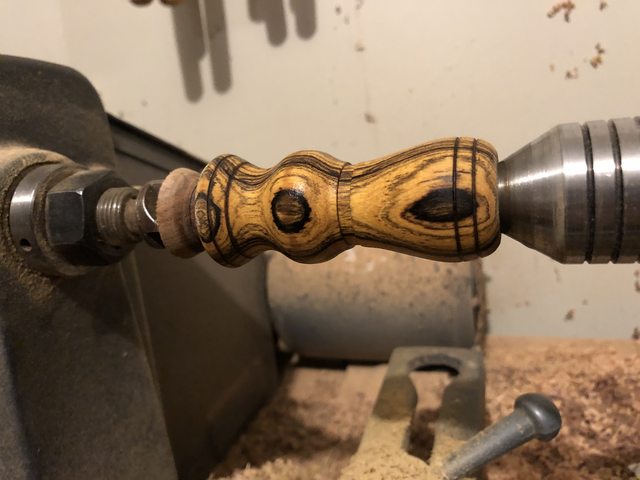 giles said:
I think my boys need some of these...go ahead and post a price or PM me, if you’re interested in selling a couple.


And...that thumb still looks broke!
Click to expand...
Sorry buddy, been off work and on vacation since before Christmas. I'm currently out of squirrel reeds because I only bought a couple, originally. If I get more I'll be sure to let you know. They are pretty quick and easy to make.
Likes: giles
C

I finished up the predator call from the last post, here's how she turned out. One side of the blank was dark, one was light, I aligned the mouthpiece with the dark side. This one went to a buddy I hunt with. 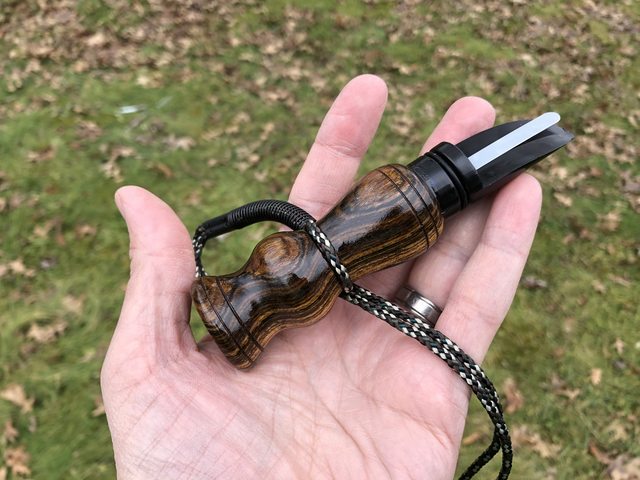 When I first started turning, I loved the look of black palm but the stuff seemed hardly worth the trouble. It cracks and splinters and chunks out really easy and really often. But, I couldn't resist trying a predator call barrel out of it since I still had a blank. I went slow and carefully, and it turned out pretty good.

You can see the right end of the blank splintered like that just from the blank being cut down. 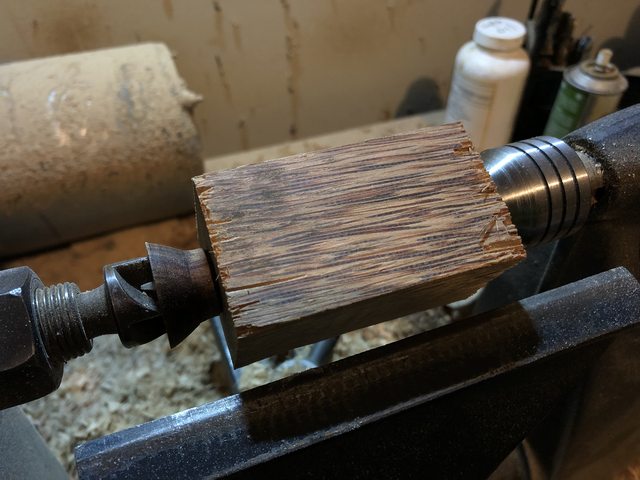 Not done yet, this is just one coat of shellac. 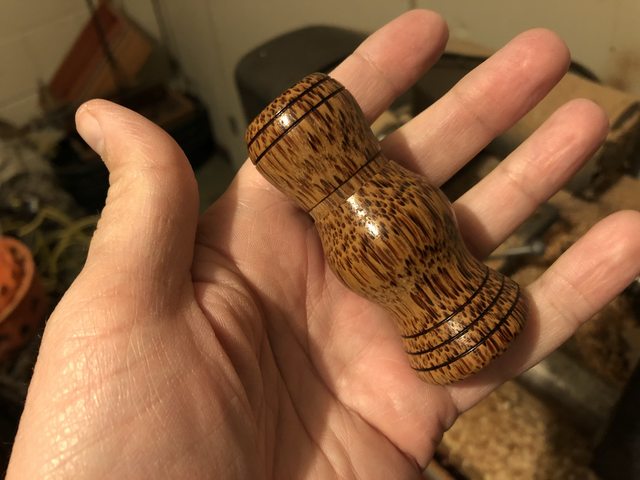 Palm is technically not even a wood, it's a "monocot" like bamboo. Pretty stuff, though.
Likes: bowhunter1023, Big_Holla, giles and 1 other person

My lathe chuck setup is not real conducive to such projects, but I decided to try making a few turkey friction calls, anyway. This is Attempt #1. As usual, I did a lot of research on woods, surfaces, sound boards, and combinations of all of the above. This first try is a purple heart call with a slate playing surface and a glass sound board. Here's how the process has gone so far, it's nearly complete.

I took the 4x4x2 block of purple heart, drilled a center hole all the way through, mounted it to the lathe and turned it round. I then cut the piece basically in half to have two "blanks" that were nearly 4" diameter and 7/8" thick. 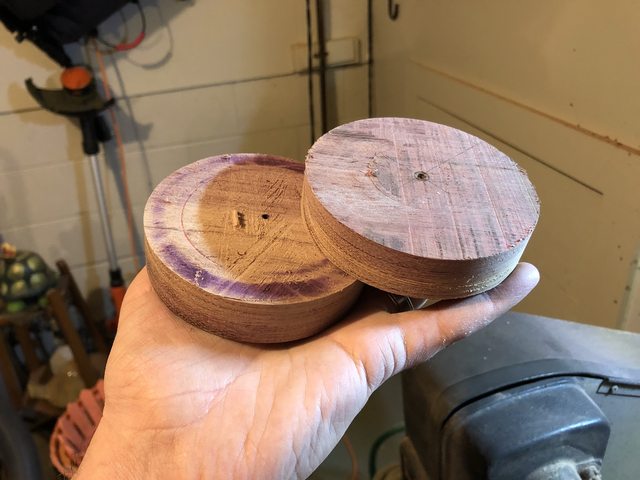 The easy part was getting the depth and diameter of the recess for the slate done. The tricky part was the depth of the center section to mount the sound board onto. The glass sound board is not supposed to contact the slate, but needed to be within about the thickness of the slate, and I needed to have a little space between the edge of the glass and the sides of the call. It was a lot to get right so I went slow and there was a lot of test fitting followed by more cutting. Once I had that right, I hollowed out the little platform for the sound board with a forstner bit and marked/drilled out my holes in the bottom of the call. 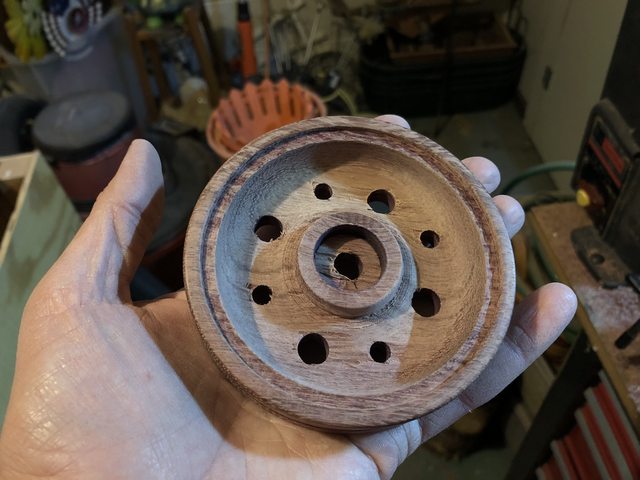 The sides of the call are pretty basic. A slight cove for grip and a few decorative burn rings. 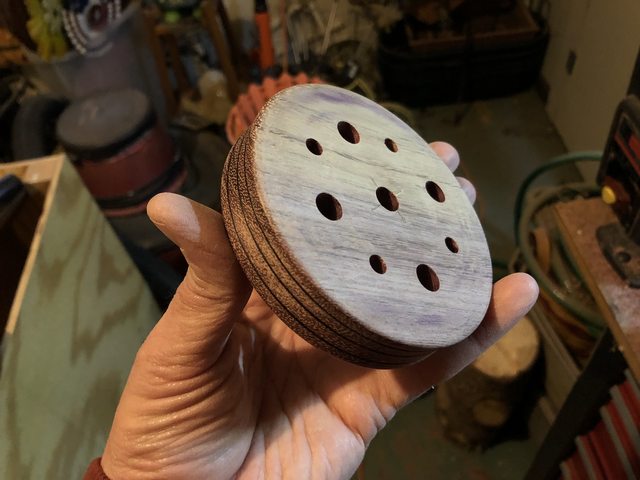 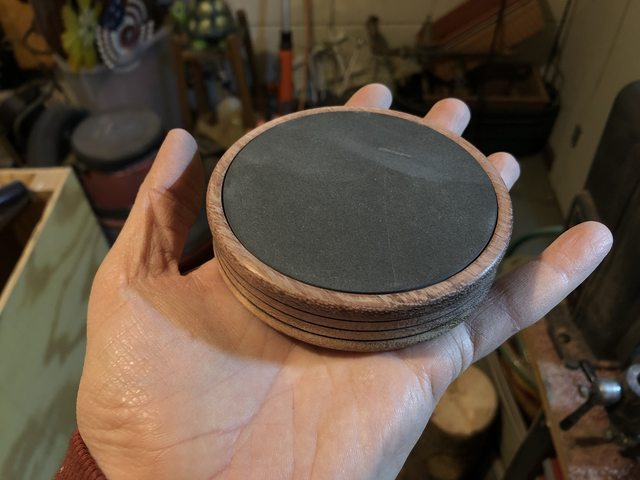 Last night I got the glass sound board glued and clamped in place. I did a lot of research and most folks were using Goop as the adhesive to secure sound boards and surfaces, so that's what I went with. 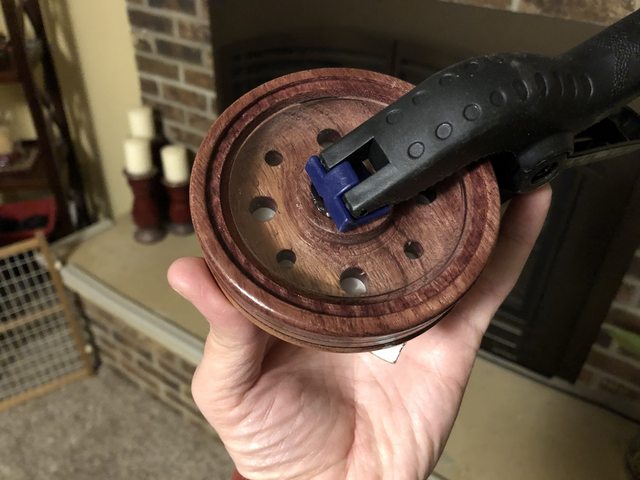 And I figured since I was making a custom turkey call, I should turn a custom striker for it. This was a piece of figured western maple I had in my turning stash. I added a burn band, some rings, and some Danish oil to darken it a bit. 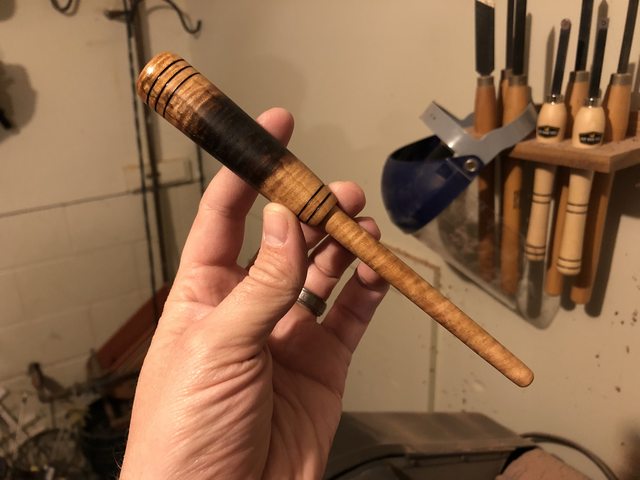 I had one of those oh shit moments when I thought I screwed up by using oil on the striker, that it would hurt it's effectiveness on the call, but playing with the slate in my hand and the striker it worked just fine. Unfortunately, I won't really know how well this thing turned out until it's 100% done and I can play it. When I just sat the slate on the call over the glass board, I thought it sounded pretty good. We'll see, I should have it finished up this weekend.
Likes: bowhunter1023, OhioWhiteTails and Dustinb80

I like the handles on those turning tools! Makes all the difference in the world. I haven’t turned anything in a long time (30 years or so) but I remember trying to use junk ones with smal handles.
Likes: Creamer
C

Turkey call #2 turned out pretty nice. I bought a couple of blasted copper surfaces to try, so I paired that with rosewood both for aesthetics and pairing a harder wood with a louder surface. Glass sound board, again. I also turned a rosewood striker, thinking it would be a good pairing to this call. Playing with the two strikers I have made, though, I like the rosewood striker better on the slate and the maple striker better on the copper. 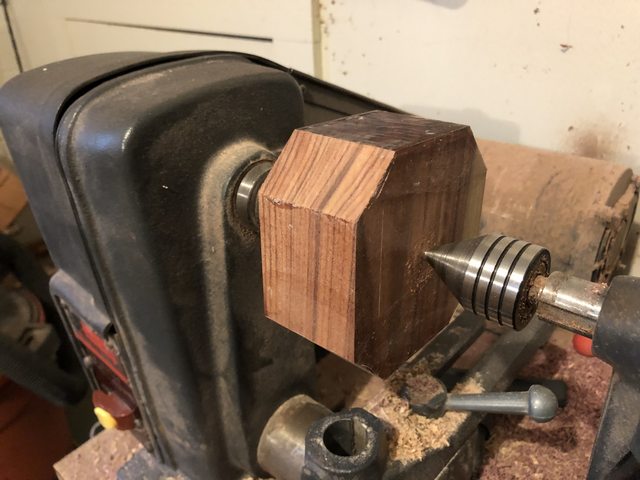 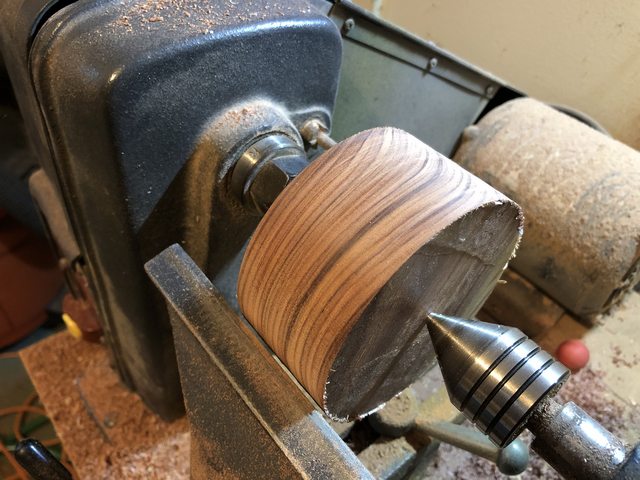 I have a serious wood crush on rosewood. It reminds me a lot of the cocobolo I have turned, but roughly half the price. 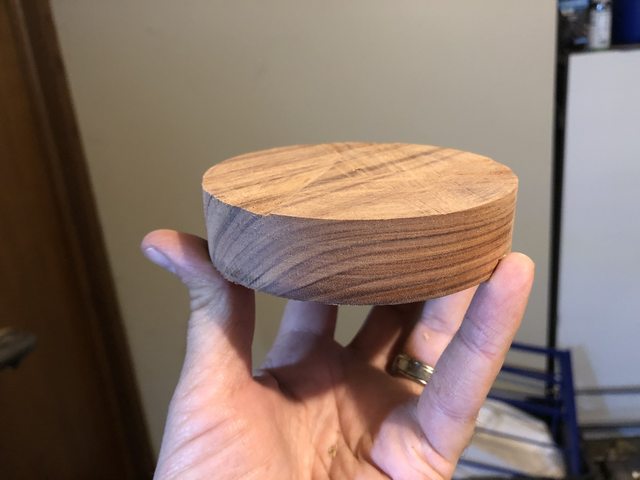 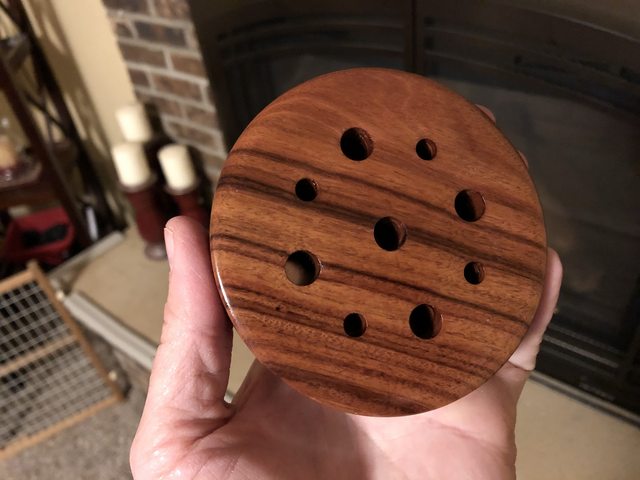 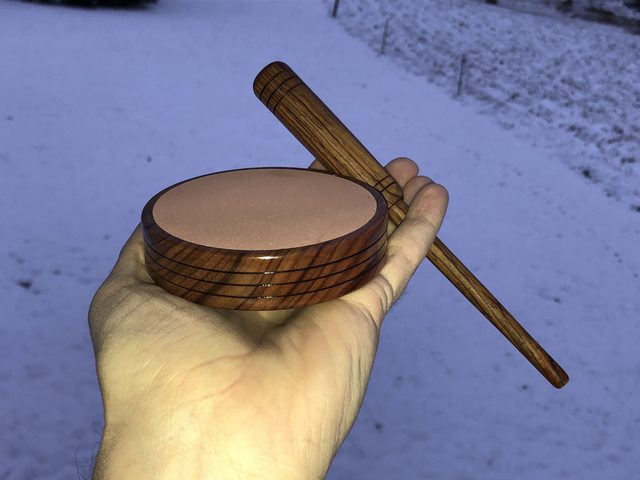 Any chance you can make a call of some kind that will bring deer and turkeys running to my couch?
Likes: Creamer and OhioWhiteTails

brock ratcliff said:
Any chance you can make a call of some kind that will bring deer and turkeys running to my couch?
Click to expand...
Best turkey call I’ve got! 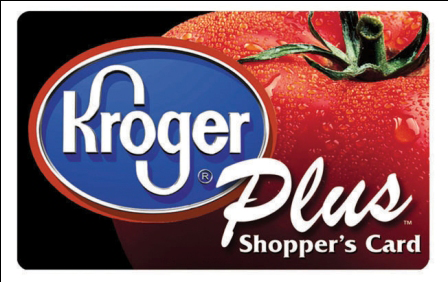 brock ratcliff said:
Any chance you can make a call of some kind that will bring deer and turkeys running to my couch?
Click to expand...
I'm in the final stages of testing on that.
Likes: brock ratcliff
C

This call for a buddy turned out kinda cool. He wanted aluminum, so this is black aluminum over glass. Birdseye maple pot. I used a torch to blacken the top edge of the call to blend a little with the playing surface...which is where the shit hit the fan. After the burn, I noticed the call was wobbling on the lathe. The heat warped the call pot a bit, so I had to correct it as best I could and recut the ledge for the surface. 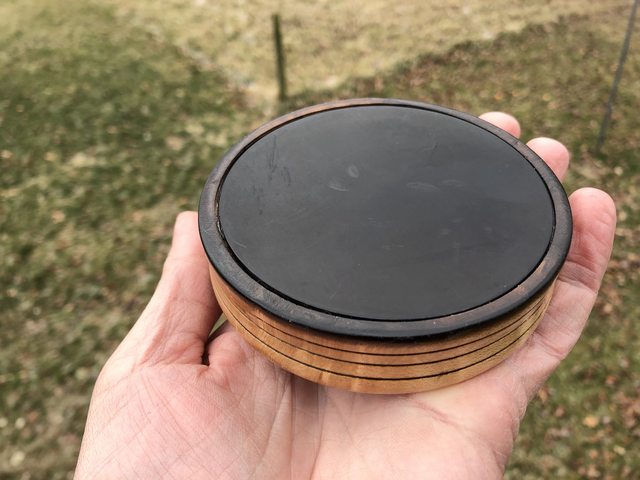 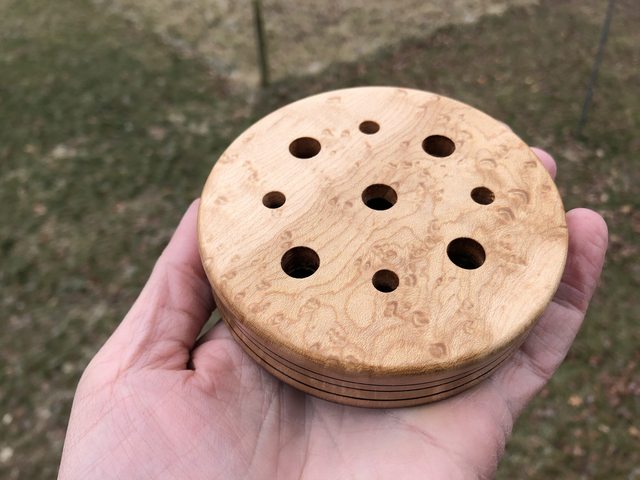 Made this one for myself, walnut pot with blasted aluminum over glass surface. 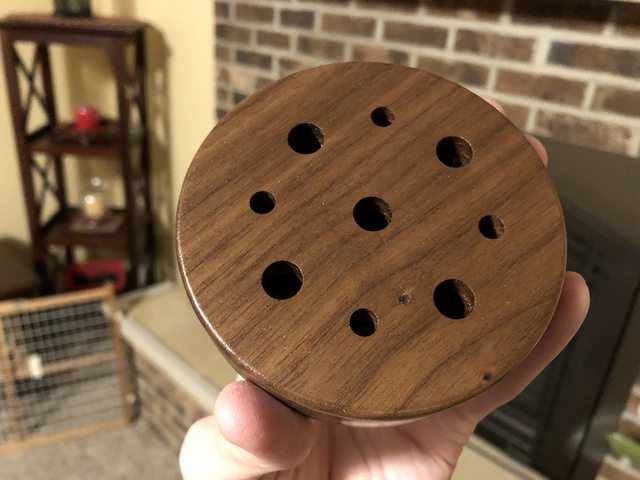 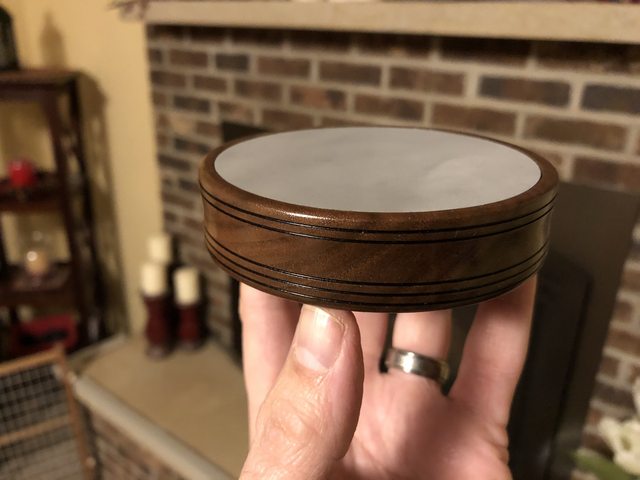 I got this one started last night. It's a cool looking blank of birds eye maple with some dark streaks running through it. I think it will make a sexy call. 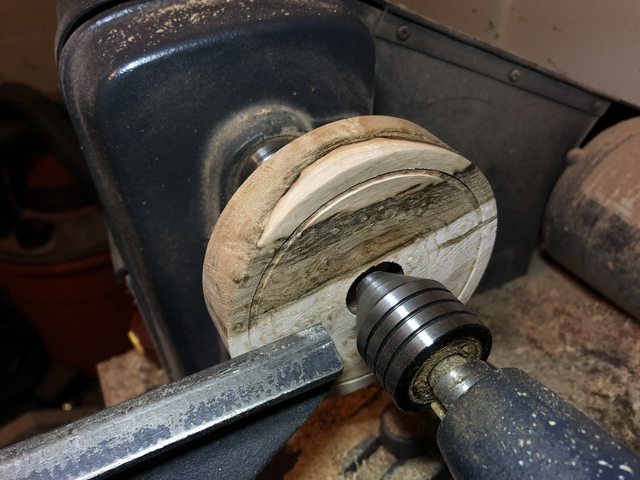 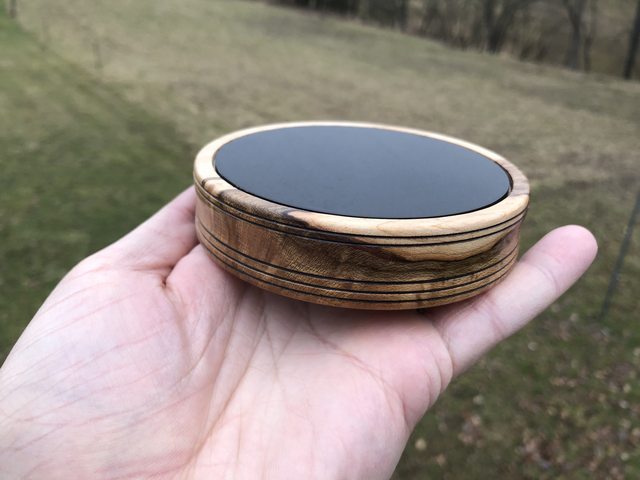 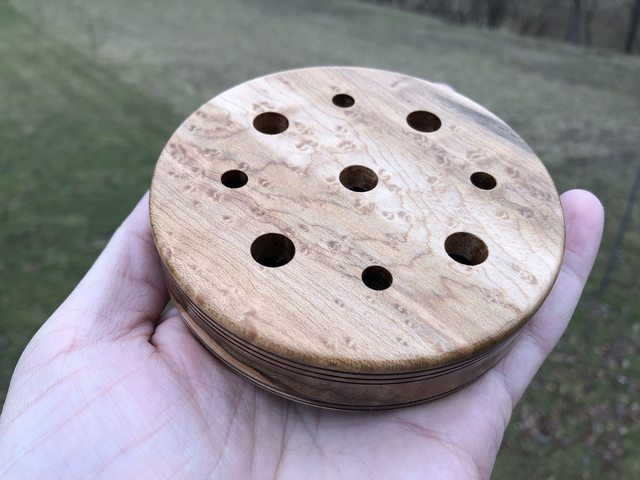 I was making myself a new squirrel call last night and nearly had disaster. I was 90% done with it and the reed/bellows end started to split on me. And that was before I had to cut a groove in that spot for the bellows. I was sure it would blow apart on me but it held together. 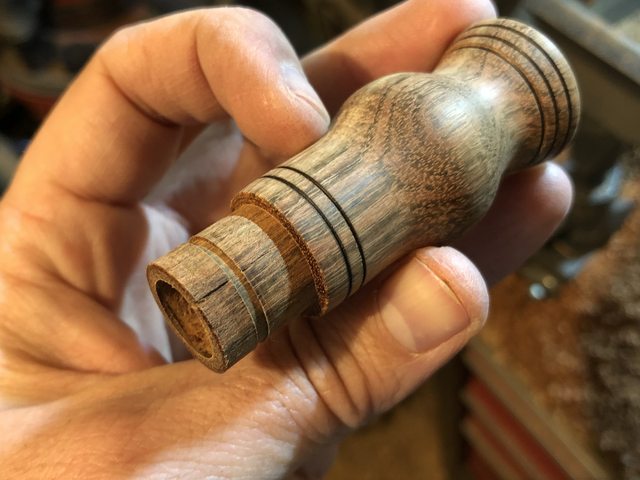 "J" said:
Well at least giles won’t be dry heaving looking at your bent thumb 😂😂😂
Click to expand...
I was wondering if anyone would notice.
Likes: giles and "J"

I hadn't made a turkey call in a while, but picked up a new surface to play with: ceramic. The ceramic surfaces are roughly double the thickness of the aluminum and copper surfaces I have used. Maybe a tad more than that. I had a piece of purple heart calling my name so I spun this one up last night. 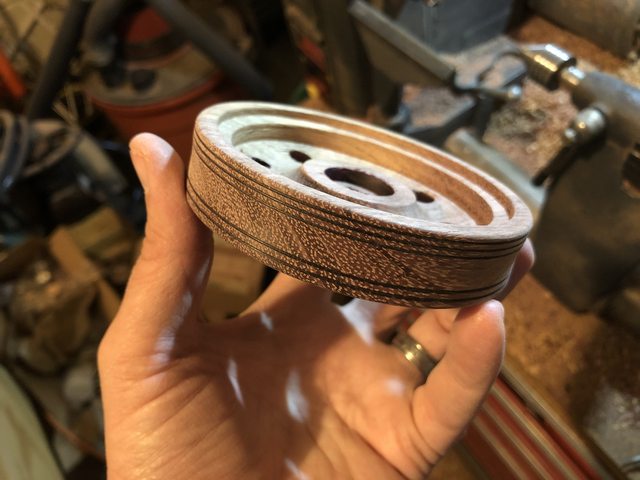 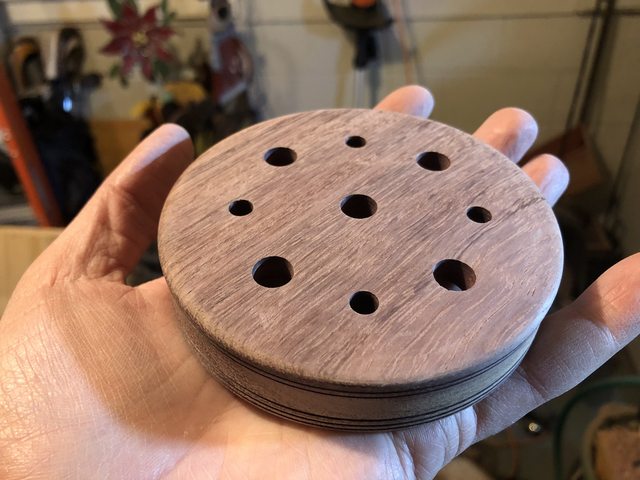