We’ve all said it to ourselves “how does he do it”. The “he” being the guy that seems to kill slob bucks year in and year out. After having known a few of these guys over the years I’ll share with you a little insight to what I believe is the most critical aspect of consistently killing mature deer. Property. It’s often said in real-estate that the most important factor is “Location, Location, Location”; the same statement holds true when hunting mature whitetails. If you want to snag a supermodel wife, hunting outside the local Jenny Craig office isn’t going to achieve the desired result. You have to hunt where they exist. Setting up outside the local plastic surgery center will increase your odds dramatically. The same is true when it comes to hunting mature whitetails. If you’re serious about killing mature deer property holds the key.

We’ve all seen the guys on TV who kill slob bucks year after year. They have all the fancy gear, tons of sponsors, and they’re really quick to pimp anything with a marketing budget. The reality is that crap pays the bills. You don’t need the fastest bow on the market, some magic minerals, or heaven forbid a device that mimics the sound of crunching acorns. At the end of the day you need three basic necessities to kill mature whitetails 1.) Mature whitetails. 2.) Time to hunt. 3.) Something sharp and pointy to kill it with. Obviously this is an overly simplistic list. We could go on for days and days with individual tactics and items that increases your odds. But for the purpose of this segment we’re going to cover the first Item; what is a “mature” whitetail.

Earlier I pointed out that when looking for a supermodel wife you have to hunt where they exist. To understand this we have to understand what creates a “mature whitetail”. The number one factor that creates a mature whitetail is right in the name, their age. In 2012 47% of deer killed in Ohio were 1.5 year olds, 31% were 2.5, and 22% were 3.5 according to the QDMA association. When the cards are on the table, 88% of bucks killed in Ohio each year are 2.5 years old and younger. Less than 1% are 4.5 year old bucks. If you want to kill mature whitetails, you have some work cut out for you. 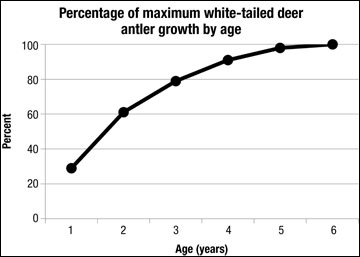 The above graph brings me to my next point. A buck makes his largest jump in growth between the ages of 1.5 and 2.5; going from 30% to 60% of his lifetime growth potential. The jump at 3.5 to 4.5 is roughly 20% with a 4.5 year old buck being at approximately 91% of his potential. Now obviously this is an average and not indicative of every deer. We’ve all see that mid 150 buck go downhill between 3.5 and 4.5, but for the most part the chart holds true.


If you’re looking to hunt mature whitetails, antler size is not indicative of maturity. In area X a 3.5 year old buck will average around 145 inches and you should realistically expect him to be 160 inches at 4.5. In area Y, a solid 3.5 year old buck may be 130 inches, and you should realistically expect that buck to be 144 at 4.5. Due to factors beyond our control such as genetics, soil mineralization, and nutrition, both area X’s 3.5, and area Y’s 4.5, are roughly a 145 inch bucks. If you remember back, 22% of bucks killed are 3.5 and only 1% are 4.5 and older. The shear factor of location alone has given the guy hunting area X a 21% greater chance at harvesting a 145 than the guy hunting area Y. It wasn’t his brand of bow, his super lightweight stand, or how whitetail savvy he was. It’s pure and simple location and the guy hunting area X has far better odds. We’ve all seen some really dumb people kill some really nice bucks, most times it simply location.

So back to property, we’ve seen how important genetics are to a location. However age is just as important. That 2.5 year old buck needs to make it to 3.5 to be 60% of his potential. As the QDMA stated, roughly 88% of all bucks killed in Ohio are 2.5 and younger. This means that if your neighbors are all named Yoder; you better look elsewhere to hunt mature bucks. But that’s a topic for the next article. “How to let them grow”


In closing, don’t get hung up on antler size, because as we’ve seen it can vary greatly by age due to genetics. Take some time to figure out the average antler size of the particular age groups in your area. If you’re 4.5 year old bucks average 135 inches, don’t sit there holding out for a 160, you’re setting yourself up for failure. Hunt mature deer based on age and let the score cards fall where they may..


Thanks to the QDMA for stats and Graphics. www.qdma.com
Last edited: Feb 21, 2020
Reactions: Stressless, finelyshedded, triple_duece and 2 others

Great read and so, so true.
Reactions: giles

Can't argue with any of that! Spot on from top to bottom! Thanks Joe!
Reactions: giles

You told me you wanted to start some threads like this (or maybe you posted it somewhere?) I am glad you did. I think this is an excellent start. I couldn't agree more. I am fortunate to have one property I feel has the "it" factor for mature bucks. Even so, in four years of hunting it I have only killed one buck on this property. They don't get age by being stupid. Great write up Joe!
Reactions: giles

I couldn't agree more. I hunted a property that was river bottom up against a metro park for 6 years and was fortunate enough to kill 156 and two 140s off of that property. And I can attribute that to hunting the edge of a 500 acre sanctuary. These deer have a chance to "mature" and grow. I no longer hunt that piece of heaven do to the landowner bought a show and started bow hunting. Now with that being said I have had hunting permission across the road from this property for years and still do. But from there in any direction for several miles hunting pressure is unbelievable. And now these deer don't have a chance to mature. Both because of lack of good mature deer holding property and having every body and there brother hunting every acre possible these deer can't mature to 150 or better. Sure you hear of one every now and then but to do it every year consistently in my neck of the wood you have your work cut out for you or you not doing it legal pop.
Reactions: giles

Couldn't agree more Joe. Around here your lucky to see a buck much over the 2.5 year mark. Out of all the bucks I have seen either on hoof or on cam the biggest would be just over the 140" mark and 3.5 years old. Sure, every once in awhile you hear of the biggun killed down the road but I think that's just plain luck and out of the norm. Can't kill all the bucks so every once in awhile one gets to 4.5 years old and gets close to that 170-180" mark but nothing like other areas of the state with better soil and minerals.
Reactions: giles

Great read. After 4 seasons on our property I am seeing that 3.5 year old bucks are in the 130s and the 4 year olds are around 150". I have always hunted for Antler size. My way of thinking may need to change for a while. I know there have been some 180"+ bucks killed not far away so maybe some of the changes we are making may draw a couple of them in and improve the genetics.
Reactions: giles

Good read. Can you give more insight on where to find supermodel looking women please....:smiley_coolpeace:
Reactions: giles

Good write up and info. As for my hunting area, My honey hole is my Father in Laws place which is only 17 or so acres. The kicker, it butts up to about 2000 acres of Ohio-Penn coal company land which gets almost no pressure. My bucks the last two years a 150" and a 140" weren't hanging out on my property, but they did stroll through coming right off the 2000 acres. I know there even bigger deer in there where they are allowed to age and grow to mature deer.
Reactions: giles
A

"Good read. Can you give more insight on where to find supermodel looking women please...."

Got the supermodel wife down but my property only consistently holds 130" bucks.

Should I sell both or just keep the property?
Reactions: giles

I'll add that having control over that property is a huge factor as well. If a farm is known to hold a 160 + and 7 guys are hunting it. Your odds of scoring just went in the crapper.

I'd rather be the sole Hunter on 25 acres than 1 of 4 hunting 100 acres given that each property is known to hold a slob.
Reactions: giles

CritterGitterToo said:
I'll add that having control over that property is a huge factor as well. If a farm is known to hold a 160 + and 7 guys are hunting it. Your odds of scoring just went in the crapper.

I'd rather be the sole Hunter on 25 acres than 1 of 4 hunting 100 acres given that each property is known to hold a slob.
Click to expand...

Excellent point. I'm lucky to have a 195 acre farm that only me and one other guy hunt during bow season, gun season it gets hunted by 4-5 guys and I stay out.
C

Pressure from other hunters is without a doubt the toughest thing to overcome I. If a deer is constantly getting buggered and he knows people are around he's tough to kill . Take that same deer on unpressured land and he's a different animal . This is my biggest struggle . Everywhere I hunt I'm sharing access with multiple people . I almost find myself hoping they kill a buck just so they get out of the dang woods and let stuff calm down .

CritterGitterToo said:
I'll add that having control over that property is a huge factor as well. If a farm is known to hold a 160 + and 7 guys are hunting it. Your odds of scoring just went in the crapper.

I'd rather be the sole Hunter on 25 acres than 1 of 4 hunting 100 acres given that each property is known to hold a slob.
Click to expand...

Outstanding read! Possibly one of the best forum reads I've read. I've never passed on a mature buck, I'm not sure I ever will.

Great write up Joe! We try to go by age for the most part but it's easy to get caught in the moment. It's all about memories for the most part and if it put's a smile on your face then go for it. Otherwise sit and watch him go by and maybe learn from it because next year he may do the same thing!
Reactions: giles
M

Great read!!! This made me think. Do you guys think different areas that bucks may reach their potential at different ages do to types of good source or other reasons. Just curious what some of you think.

Muzzy Moment said:
Great read!!! This made me think. Do you guys think different areas that bucks may reach their potential at different ages do to types of good source or other reasons. Just curious what some of you think.
Click to expand...