Thanks to a buddy of mine who had a permit he couldn't use, my son and I will be hunting the refuge tomorrow.

I've hunted and trapped the public land that is close to the spot we will be hunting. Pretty dang excited as there's always some good bucks in that area!

I have provisions packed for us to do some tailgating for lunch if he hasn't shot anything by then.

I'll be checking in as the hunt goes on with my phone.

Good luck Zach! Have a great day with your son tomorrow Dale! Good luck to you both!

This sure is awful early to be getting up for a deer hunt.

Gotta remember to pack the camera.

Have a good one fellas!

"J" said:
Wow Congrats on the doe... nice shot placement too... how far of a shot and are you still at it? I'm assuming you can get more then one...
Click to expand...

We were the second group out of the station this morning and arrived at our designated spot 40 minutes before legal shooting time. This worked out as it gave us time to finish our coffee and discuss a game plan. I have logged a lot of hours on the public lands around that area and had watched many deer retreat to the block we would be hunting. We made our way around a good size pond and down to the corner where the woods and and a deep ditch meet. Had some beaver slapping their tails at us on the way in. The lay of the land right there forms some what of a funnel. I was hoping we would have deer move past us, but it was still a long shot going in blind like that. We only walked about twenty yards inside the woods and found some cover to put at our back. We had 10 minutes to wait for legal shooting, and watched a nice fat coon walk by us. By 6:45 I could hear the beaver slapping their tails again and figured another group of hunters were coming in. Fifteen minutes later I hear brush breaking and was expecting to see orange instead of brown. The doe stopped broadside at 40 yards down wind of us. Zach thought a squirrel was making the noise and didn't see the deer. I kept whispering, she's right there, she's right there. I finally had to point her out and figured she was going to blow out. Zach raised up on her and fired one shot. I couldn't see the hit, but she wasn't running normal the last spot I seen her. After a couple of hugs and chest bumps he told me he thought he hit her high, so we decided to wait a few before looking. Fifteen minutes later I could tell it was killing Zach to wait so I said lets go take a look. He assured me his shot was dead on as far as left and right goes, but a touch high. We didn't even make it to where she was standing when Zach points and says there she is! He drilled her heart at forty yards and she didn't make it twenty yards before going down! What looked like high shot to him turned out to be a text book shot.

Nice young doe for the freezer, and we headed home. 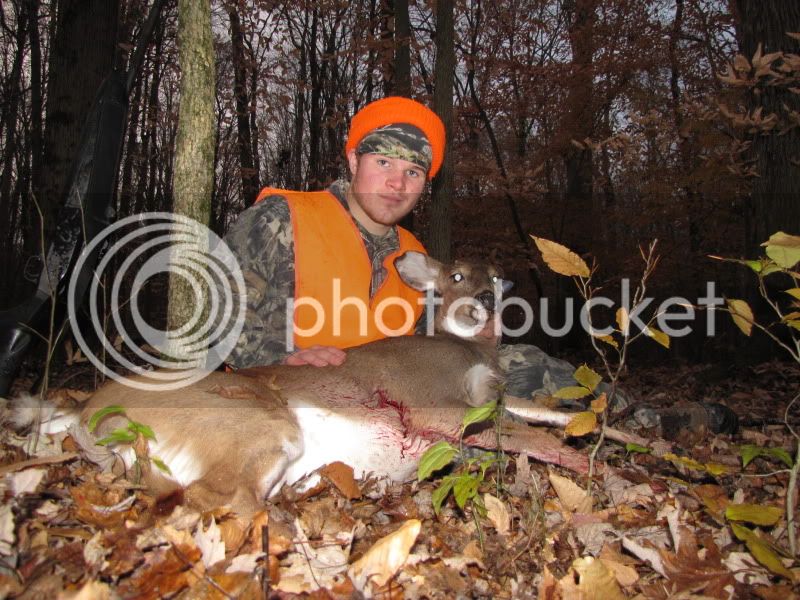 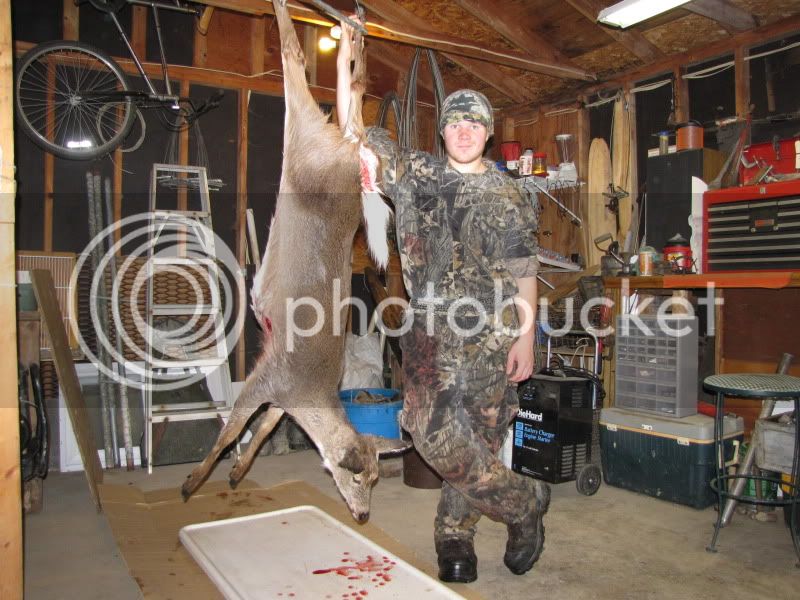 Outstanding story, tell Zach congrats on the shot placement, the first picture tells the shot the last tells the story... Another proud hunter with a good day.... Is this his first????
R

Sweet man! Thanks for sharing with us. Love to see young hunters like myself have success. That's a great shot too.

"J" said:
Outstanding story, tell Zach congrats on the shot placement, the first picture tells the shot the last tells the story... Another proud hunter with a good day.... Is this his first????
Click to expand...

I'll tell him when he wakes up! This is his second deer, he shot a big doe two years ago.


Cap't Ernie said:
Sweet man! Thanks for sharing with us. Love to see young hunters like myself have success. That's a great shot too.

Just a quick update to cap off a fine day!

Getting her ready for the dinner plate. 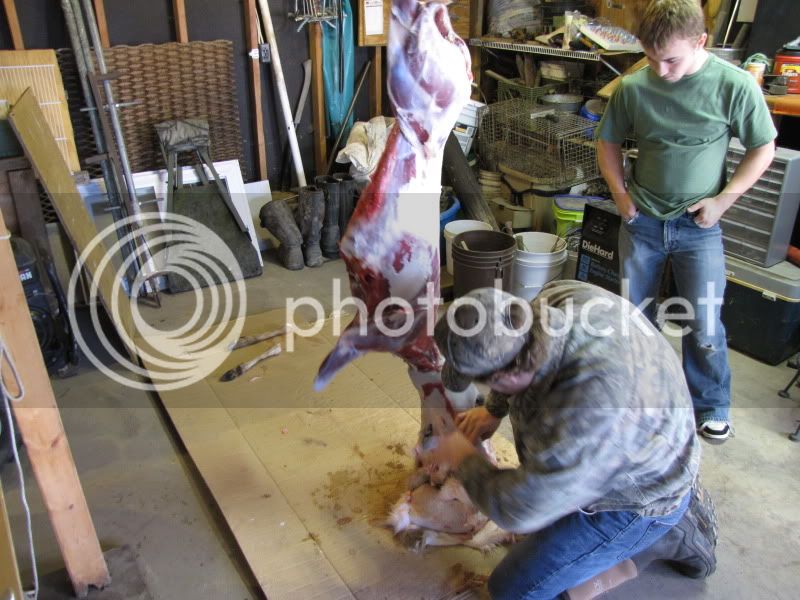 Hard to beat a meal or a day like this.:smiley_cheers: 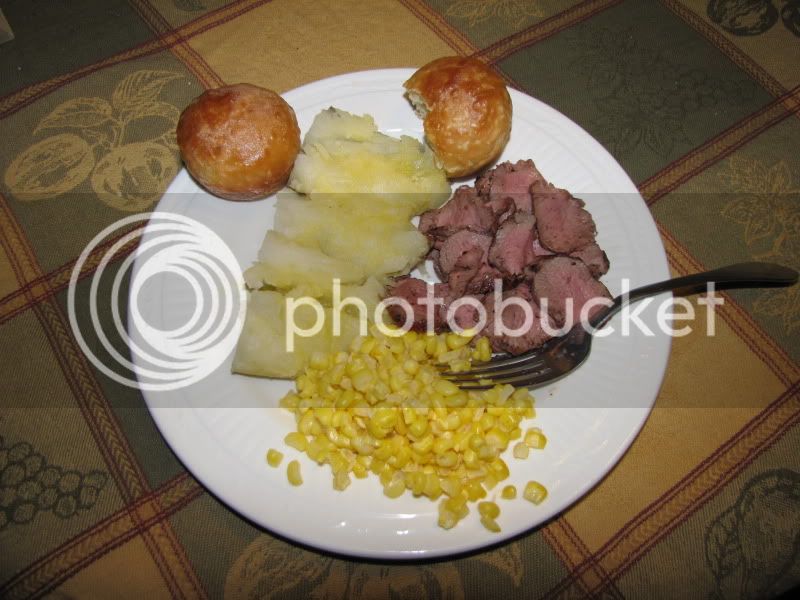 Man, Badger my mouth was watering lol... Glad you and your son hgad a good day of it....

Dang Dale! Congrats to Zach! Nice shooting on his part, and thanks to you I am going to have to go eat again. Tasty viddles!
S

Wow that is a nice shot! Great job Mr. Zack!

I thought you would appreciate that shot Shawn! If something doesn't happen soon for me in the bow stand, I'll be carrying that gun after work loaded with sabots.

Saw the pic earlier Dale when I added Zach's kill to the tally! Nice work Zach. And dad!!!

The real question is, will he follow in dads footsteps when it comes to cooking?!?

Kick ass Dale. I was in Vinton County all weekend and am just now getting through the 4 pages of posts. Zach put the hoodoo on her didn't he. .. Great experience for both of you and something I'm sure he nor you will ever forget. THAT is what hunting is all about. Be sure and tell Zach I said congrats. Oh, and congrats to the ole man too on the memory of a lifetime.

Thanks guys. Sharing these hunts with him means more than any I've ever done on my own.