My buddy shot a tank.

I had the pleasure of putting a good friend of mine on a hog of a deer this weekend and got some great footage from it. We hit the stand about 0530 and at 0600 we could here something working it's way through the swamp grasses rather quickly, actually it was a couple somethings. Right before shooting light they were 30yds to our right. Once we had good light I noticed a doe 35 yds out. She was a big ol girl and was just begging to get whacked. Then we hear what we were waiting for...that nice subtle grunt. This large in size buck stepped out through the weeds and was looking for her. She stood perfectly still as he was looking all around. We thought they were going to circle around us but that just didn't happen. The buck ended up walking way out around and just disappeared. About 15 minutes later as this doe is still standing 30yds from us I see movement below us about 20 yds out. I thought it was two small does but it was actually two coyotes. This swamp we are hunting is extremely thick. The deer literally walk under all the brush and it greatly resembles sharks swimming in the ocean as often times all you can make out are their ear tips. The coyotes ended up coming in and stood 8yds off the tree and Denny dropped one. As he looks back at me to do his interview half way through his sentence he spots that buck standing 90 yds out watching us like a hawk, mean while that doe is still there at 30 yds watching us. Well long story short that bucks works his way back around to us and stops to look at us at least 3 times before he gave Denny a 35 yds shot. After the shot we look back and guess who is still there standing looking at us...yep, that doe. See, she had us to her right, a big buck wanting some action behind her and two coyotes 20 yds in front of her. I guess she figured she was screwed either way and thought it be best just to stand there and not move...lol

Well, he made a great double lung shot and we recovered the deer 70 yds later. This dude is everything he lived up to be from the one picture I ever got of him. He has some serious mass and width and his body was huge. I personaly have never seen a deer have a body that big, so it was a first for me. 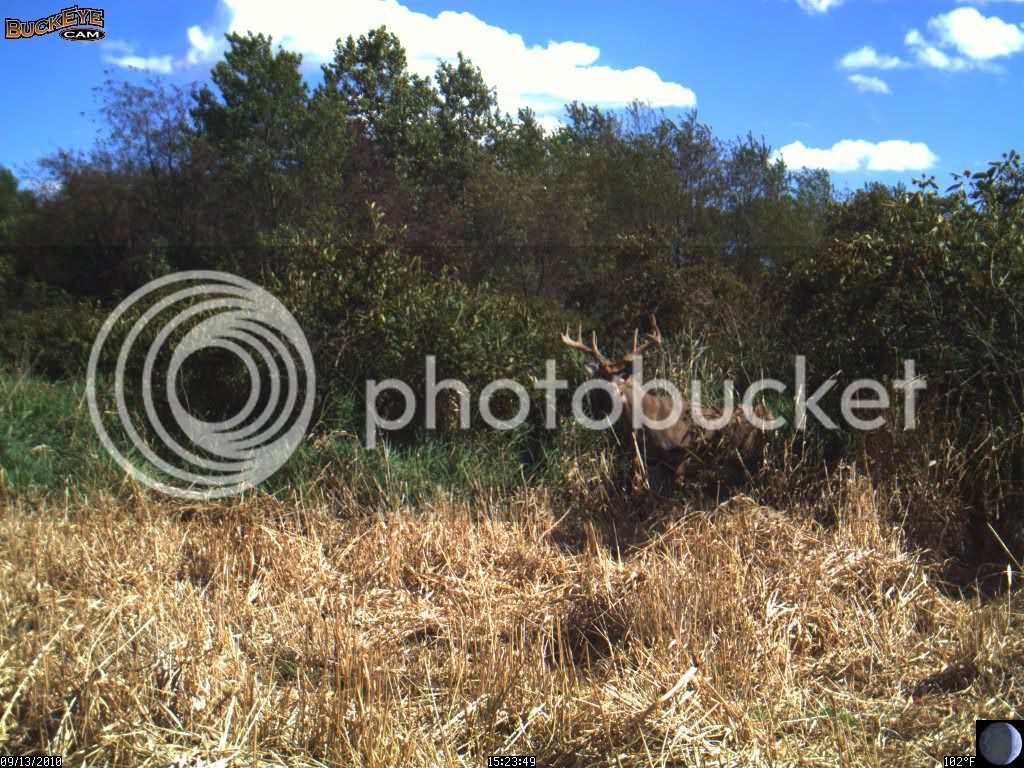 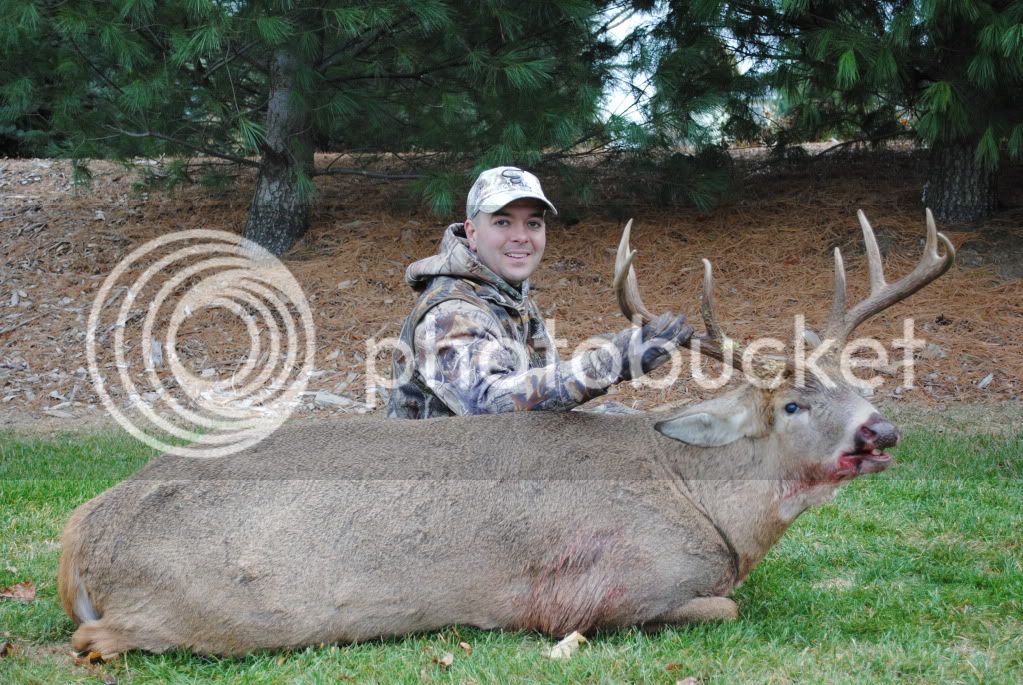 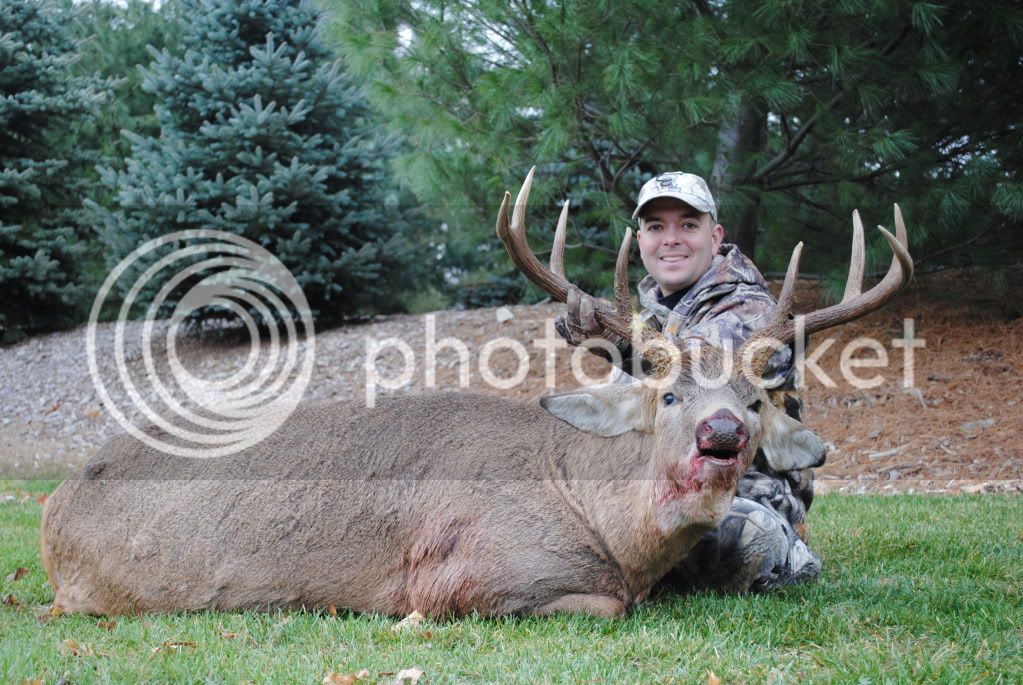 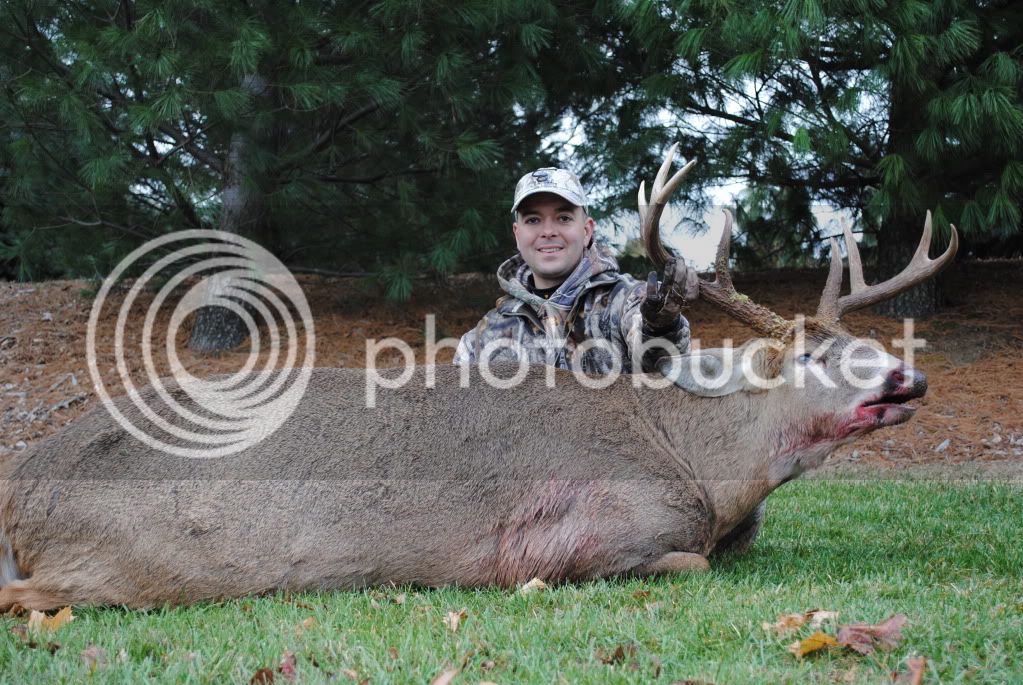 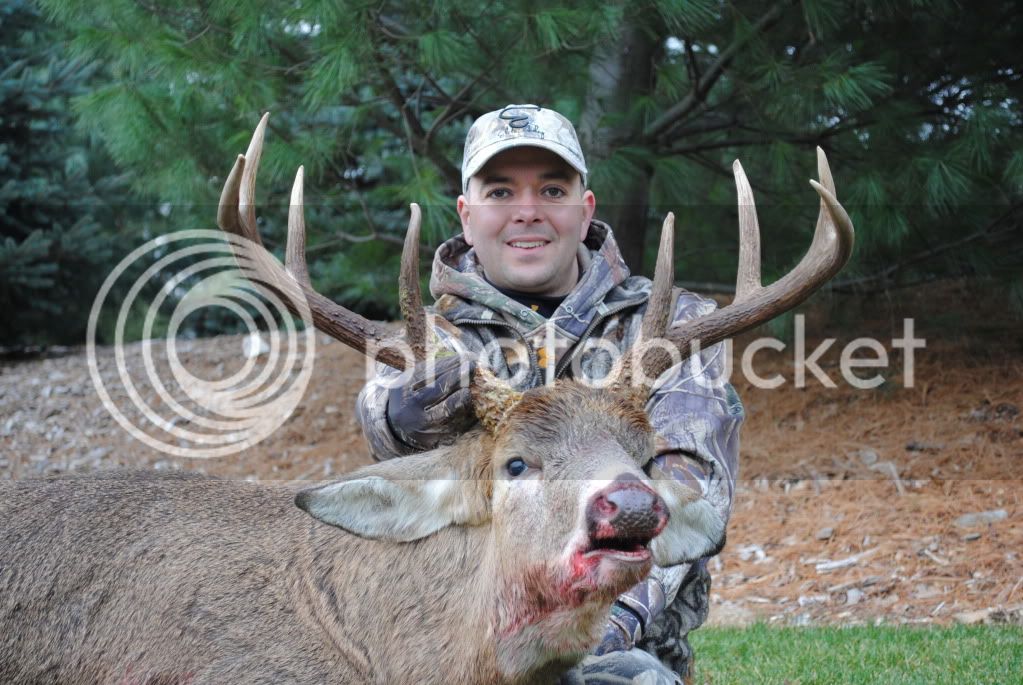 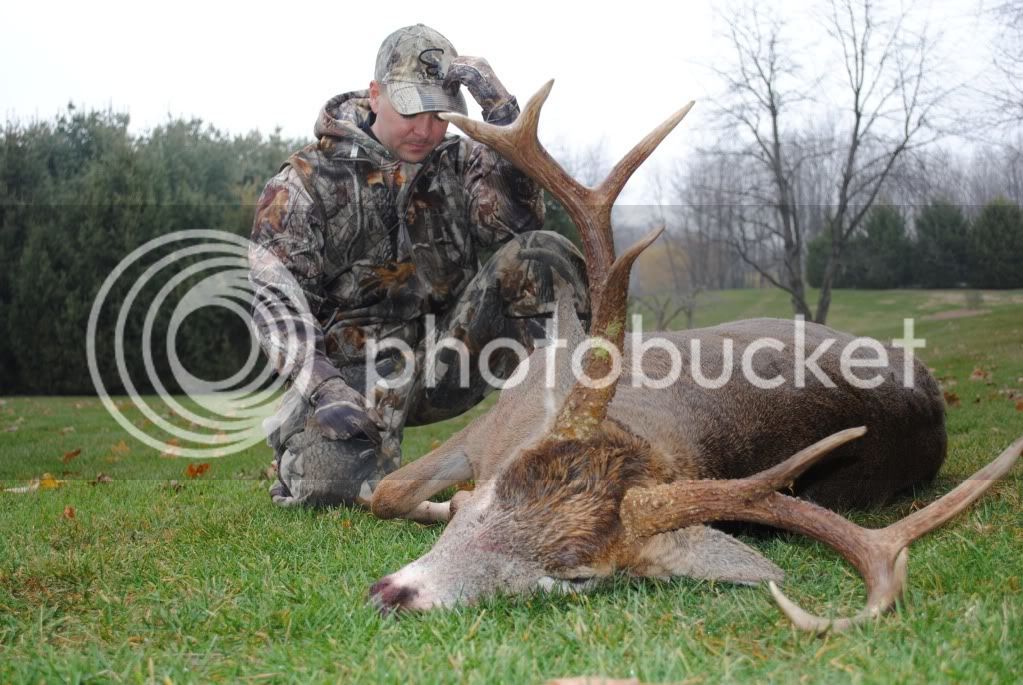 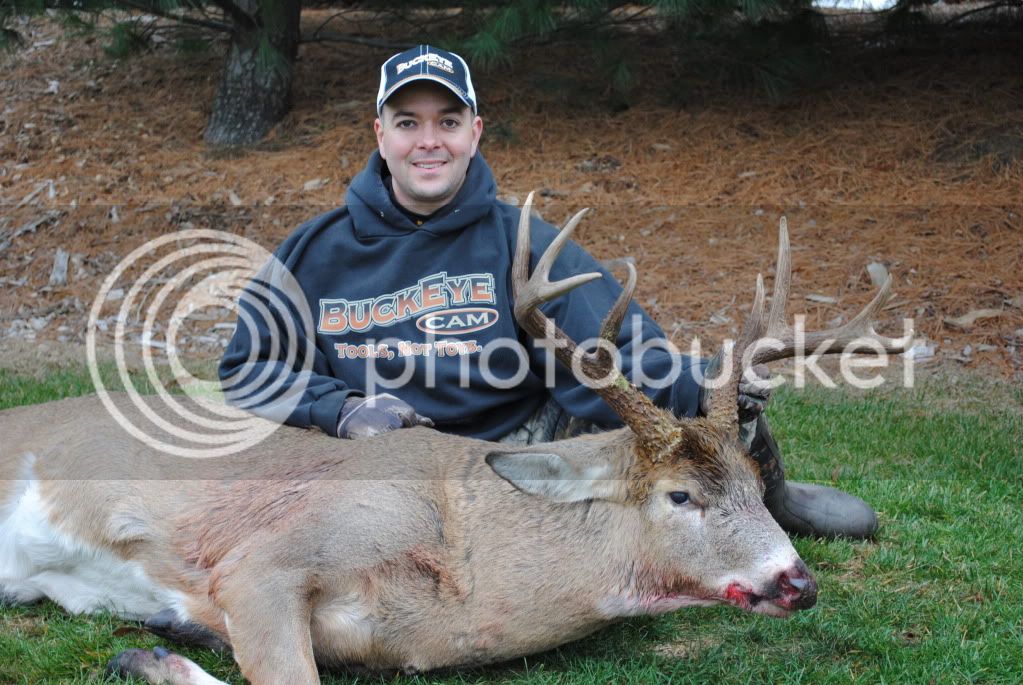 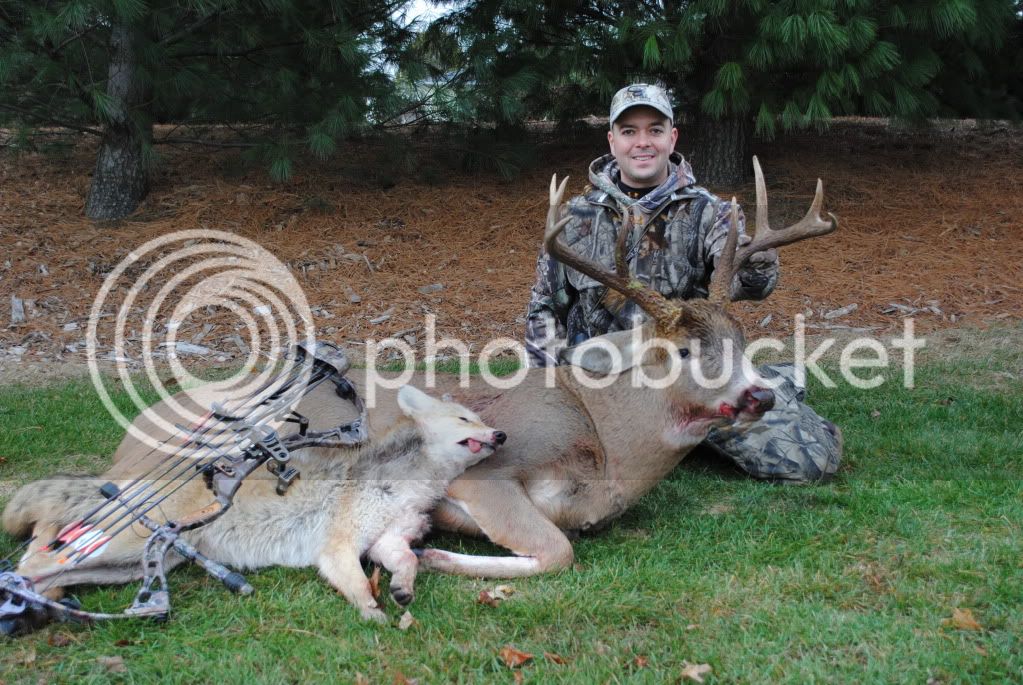 Hell of a deer he shot Dale... Put up the one pic where you drew the line for comparison. That really shows how big that sucker was on the hoof.

yea no doubt, that deer has a huuuuuge body!!

Jackalope said:
Hell of a deer he shot Dale... Put up the one pic where you drew the line for comparison. That really shows how big that sucker was on the hoof.
Click to expand...

Here you go. I went and later stood in the same spot as this deer did and then brought his picture over to mine to campare his size. The heigth is lined up correctly. 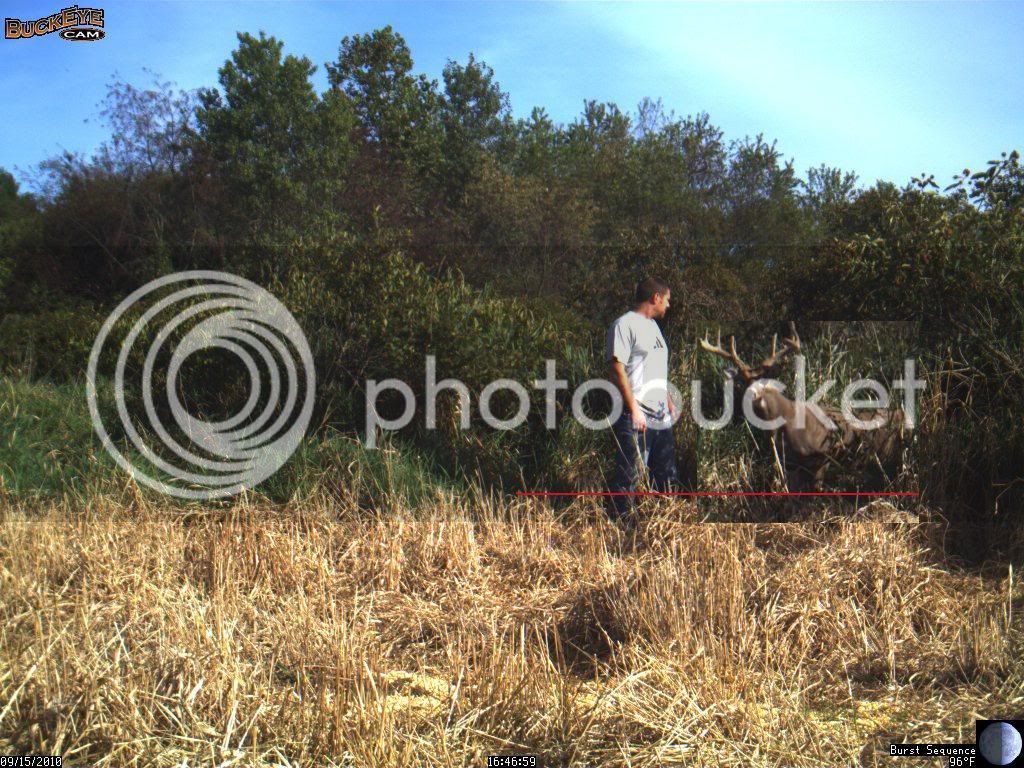 That deer is one horse of a whitetail! Congrats to Denny on a dandy buck!!!

Wow dale! That is a hog! How old you think he was?

its deerzilla , congrats , did ya have him weighed

WOW! That is one huge buck!!!
Congrats

That is a great buck. Dark wide rack with great mass and huge body to top it all off. It doesn't get much better then that.

Congrats to your buddy Dale. Nice buck and a yote bonus .


Sounds like a good piece of film footage was shot that day as well. Can't wait till after the season and see the footage.

wow, that's a hog! how much you think he weighs?

Kujo said:
wow, that's a hog! how much you think he weighs?
Click to expand...

Our best guess he was pushing close to 290-300lbs on the hoof. I mean I literally just stood there and looked at that deer for at least 3 minutes, motionless and speechless (seemed like eternity) once we walked up to it. I have seen big bucks before and at the time thought "well, they probably don't get bodies much bigger than that"...I stand corrected. I truely witnessed a first in my hunting career when I walked up on this stud.

Damn!!!! That thing is a freaking hog!!! Way to go and Congrats to you and your buddy!!!

Congrats on getting Denny on a fine buck Dale! It looks like you guys are gonna have some awesome footage this year! Outta make for a great DVD!

BTW, did you get a sweet deal on a bow, since you hooked him up?! :smiley_blink:

Fluteman said:
Congrats on getting Denny on a fine buck Dale! It looks like you guys are gonna have some awesome footage this year! Outta make for a great DVD!

BTW, did you get a sweet deal on a bow, since you hooked him up?! :smiley_blink:
Click to expand...

That would of been nice.. but he doesn't work for Elite anymore.

Dang. That is one big frickin buck. Congrats to the man. I tip my hat...

DEERZILLA! Holy CRAP!
That whole story is insanely cool - the doe, the yote, the stare-downs, the hog....
congratulations to you BOTH!

Wow Dale, that thing is a beast! Thanks for sharing and congrats to you and your buddy!