Who over here has beagles or hunts rabbits? I would love to see some pics over here. I know it's early and bow season is in full swing. Actually I don't usually hunt rabbits much until after gun season, but this new beagle I got this past spring is really making me excited for the season. I've only been hunting the front half of the farm so as not to disturb things for deer hunting too much. Anyway, finally got the first of the season while working the creek bed behind the house. 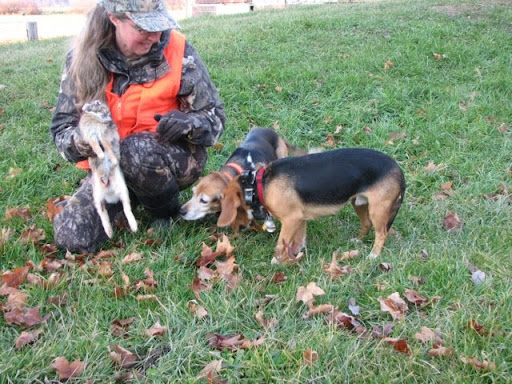 Anybody else been out and about? I really am needing some good rabbit hunting stories!
U

i used to hunt alot , but not so much anymore , i still get out once or twice a year with fred t though
H

i do a lil bunny shootin with the bow , but mostly i turn the beagle loose and set in the swing with coffee
R

Nice lookin bunny Bluedog! It'd be nice if we got some snow...

That was the last rabbit I shot, on New Year's day. Not sure how much rabbit hunting I will do since I'm not a huge fan of one of the guys I normally run them with (but I still get along with the guy with the dogs!). Hopefully we can put our serious issues aside and hunt together still, I'd like that. Most likely I will be hunting Thanksgiving morning with them and the beagles, should be our 4th year. We always hunt the same piece, I know exactly where the rabbits jump, run, and where they circle around for me to hopefully shoot!

I'll be getting out the first time Thanksgiving morning, we have a group hunt and have been doing it for years, I'll try and post some pictures of the results.... Nice looking dogs you got there how old are they??? I see grey on the back one but the front one's turned the wrong way to age it...
B

"J" said:
I'll be getting out the first time Thanksgiving morning, we have a group hunt and have been doing it for years, I'll try and post some pictures of the results.... Nice looking dogs you got there how old are they??? I see grey on the back one but the front one's turned the wrong way to age it...
Click to expand...


The front one is 15 months old. I just got him May of this year from someone who raises beagles. The back one was a beagle I got from the local animal shelter 3 years ago. She was grey then so who knows how old she is? I think she is one of those dogs that has had a white face early on. I estimated she was around 5 or 6 years when I got her so that would make her 8 or 9, but I really don't know.

I'm looking forward to Thanksgiving too. My 12 year old niece has been going rabbit hunting with us since she was little, but she would just go along without a gun. This past summer, her dad has had her shooting a .22 to practice shooting. He only has a 12 gauge shotgun and I have a youth model 870 20 gauge so I am going to take that over so she can practice with it. Maybe I'll even take the rifled slug barrel too and see if she wants to go deer hunting too. She has gone deer hunting with us a few times, again, not carrying a gun. Us girls need to stick together though!

Nice looking dogs ya got there. It has been years since I've followed dogs chasing bunnies. I still go out and kick brush piles to jump them myself, but it's just not the same. My son is always wanting to rabbit hunt so maybe I'll get me a dog some day.

Nice picture Bluedog. I have a beagle that loves to run he will run all day and night if you let him. Hasn't had as many rabbits killed infront of him as he should. (only a handfull) I have a really cool pic of me and that dog from when I was younger I will put it up later.

Good luck to you and your niece.

I have a beagle dog, shes a great dog but i need to work with her alot before i get her in the woods.

"J" said:
I'll be getting out the first time Thanksgiving morning, we have a group hunt and have been doing it for years, I'll try and post some pictures of the results.... Nice looking dogs you got there how old are they??? I see grey on the back one but the front one's turned the wrong way to age it...
Click to expand...


We also have a group that goes every thanksgiving. Id like to take the dogs out more but I usually choose to go deer hunting.

JPN said:
We also have a group that goes every thanksgiving. Id like to take the dogs out more but I usually choose to go deer hunting.
Click to expand...


I was just down there yesterday... Had a cup of coffee and a pancake with COB at the Bob Evans off 541.... We'll be out this Thanksgiving not sure of the numbers this year it's who ever shows up in the mornin... Some like me and my son make it every year some not so much lol...
R

stopped raining long enough for dad and I to get out for an hour or so. We ended up getting one, it was good to get out with the dog again.

JPN said:
stopped raining long enough for dad and I to get out for an hour or so. We ended up getting one, it was good to get out with the dog again.
Click to expand...


I can always tell when rabbit season comes in cause they always leave the yard.:smiley_chinrub:

I have a 10 year old that used to run with the best of them. She has it in her spirit still, but her hips are bad.
I'll get a pic up later. She's now just a loyal lap dog.

cotty16 said:
I have a 10 year old that used to run with the best of them. She has it in her spirit still, but her hips are bad. .
Click to expand...


It's a mixed blessing when they get older like that, they've earned their keep as a companion and in the field and when they retire you wish you had another year in the field with them.... I've had to put my fare share down due to illness and it's not the easiest thing to do, but you have to do what's best for them not you.... She looks like fine dog there Cotty... I bet you have a lot of good memories with her :smiley_clap:

Well Bluedog I finally made it out today and boy did we make a day of it.... I left the house at 0730 and just got back and finally finished up the cleaning up of the meat... Dogs are fed, watered and are probably sleeping right about now in a bed of cedar chips....
First stop netted one run into a swamp and no sightings.... One and only run there but we didn't have a good feeling about the place anyway... Stop #2 we talked to the owner and he's been seeing a lot all summer and fall, and they're doing a number on his berry bushes and wants them gone.... We had six runs and I went 4 shots netting 3 rabbits (first time out with COBS old O/U that I purchased off of him) My buddy went 0 for 3 and wasn't happy but sometimes it works out that way... We were there for about 3 hours and the dogs were running them the whole time... Last stop of the day, we had 2 very long runs and they brought them around 3 to 4 time each but do to the thickness of the area we couldn't get any good shooting in... I threw lead at one of them twice with no luck, both were really stretching the capabilities of the old .410 but I was on a role and went for it lol... No luck, but they live for another day :smiley_clap: :smiley_blackeye:
But for the first time out this year we had a good day and the dogs did exactly what they're supposed to do, we probably could of done better in the getting dept but oh well that's hunting... Can't wait until the next go around, there were only two of us due tothe OSU/Mich game noone wanted to miss it, although I am a big OSU fan what the heck that's why I bought a droid, I can get updates... We did talk to all three land owners and they were happy we were back for another year to thin out the heard..

The picture is from the second stop and I had the first one on the ground and they jumped another and it ran about five feet from where the the first one was down so two rabbits in a matter of 5 feet apart in less the five minutes... The dog on the left is Penny, a red bone mix and the one on the right is Katey who is a bluetick mix, Pennies in her 9th year and Katey in her 6th and both are doing a good job for us :smiley_clap:

Sounds like a good day out there J. Glad to see Penny back out and working hard knowing the mishap from last year.

Give her an extra treat from us here :smiley_clap:

Will do Adam, last year was a bad one as far as that went, Bluedog helped out a lot feeding information on what to expect and put a lot of fear at ease because of her background... Penny is non the worse for wear on that one and doesn't show any ill effect from it... She hasn't missed a beat and seeing the picture today from when we first got her, man she's showing her age lol... But she doesn't show it in the field, although she has gotten less patiance with Katey this year lol...
You must log in or register to reply here.
Share:
Facebook Twitter Reddit Pinterest Tumblr WhatsApp Email Share Link