So yesterday I was driving down the road, in between inspections, and noticed an old farmhouse with a bunch of old shit in the front yard with for sale signs on it. As I get closer, I notice an old spike harrow laying there. My eyes got real big and I immediately turned around and went back. The old man that owned the farm was there, and he and I had a great conversation for about 15 minutes. There was only one laying there, but he said he had another one in the barn that goes with it. I asked what he'd take for both of them. I about shit my pants when he said, "Oh I don't know... How's 25 bucks sound?" Naturally, I said I'd take them, handed him 15 bucks to hold 'em, and that I'd be back later in the afternoon to pick them up.

Now mind you this is a steal of a deal, IMO. I borrowed one of these from a buddy last year, and he said he paid almost $75 for it at an auction... for just one! And believe, it was the cat's ass for prepping and finishing food plots.

So anyway, I go back yesterday afternoon and he asks me if I'd be ok with only taking the one harrow instead of two. As my luck would have it, another guy seen it after I did and about cried when the old man said he sold both for only 25 bucks. Since I didn't really need both, I said that was fine and he said the 15 bucks was good for the single harrow.

She's a rusty old bitch and has definitely seen the weather, but she's soaking in PB Blaster right now and I think it'll be just fine. For only 15 bucks, I think it was a hell of a find. These things are great for dragging behind the quad over a freshly tilled or disked food plot.

Good deal JB even if it only ended up being the one.... Years a service a head of you with it....

That'll work real well for ya.

Very nice! Heck of a deal TOO!

Gotz damnit JB!!! You had my hopes up you'd have an extra to bring to the shoot so I could haul it back to SE Ohio!!! :tantrum:

A couple weeks ago we welded everything together and made it so that all the bars and framework is in a fixed position. I just throw some weight on top of it and drag it behind the 4wheeler and it does a nice job working and smoothing the ground.

Jesse said:
Gotz damnit JB!!! You had my hopes up you'd have an extra to bring to the shoot so I could haul it back to SE Ohio!!! :tantrum:
Click to expand...


Believe me buddy, this is EXACTLY what my intentions were. When he first told me I could have them both, I thought of you raking all those fucking plots by hand, and was going to give one to you. Sorry bud. lol

Still have one.. All i need to do is carry it up the hill. 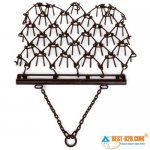