Looking forward to following along!

I did most of the reporting for the last hunt in the 2021 Muzzle loading thread - which was lots of fun - Thanks Denny.

Ma and I came up and we had a couple days to ourselves at the cabin before Zak drove in. He had some things to get done after New Years so he showed on the afternoon of the second day of the ML season - I tried to stay off the property as much as I could to not blow them out of the county and keep them in the rhythm of AM and Afternoon feeding. So we reviewed the weather, wind and picked stands, up and out before light. Now I had finally pulled the trigger on some great gear before Xmas with the thought to hand Zak a set of med or heavy weight bibs and jacket Xams - We'd both wear them and he'd pick which set he wanted for Xmas. I'd keep the other and replace in 2021. We pulled the tags off the night prior to hunting and were like kids in a candy store.

I have always just made due with whatever might happen to be on sale or not disintegrated over use and time, that is .. until after this fall. Decided that > 55+ y/o I don't need to shiver to stay warm, I'll burn some of those $ before Biden taxes them away and get some good stuff.

We headed out and got our butts handed to us, that 3rd day AM hunt of the season we sat till noon or so and came in ate with the Mrs. and and went back out about 1430. Sleet, drizzle half assed snowing but the gear worked! Nothing to showed till last light and we got busy, both knocked down does and spent a bit getting them back and hung-up. My little fawn doe was partially blocked by brush and was acting like a older doe, at 55-60 yards in dim light and some fog I mistook her for older doe and finished out the season with some veal. Zak took a mature slickhead. For whatever reason I didn't get any shots of the deer hanging -next year!!

While we were out blowing holes in Does Monday night - Niles came in at last light as well, just not where Zak was setup. Once I showed this Zak - he got serious about trying to get a buck - he's not tagged one with antlers yet, this would have been a dandy #1..... 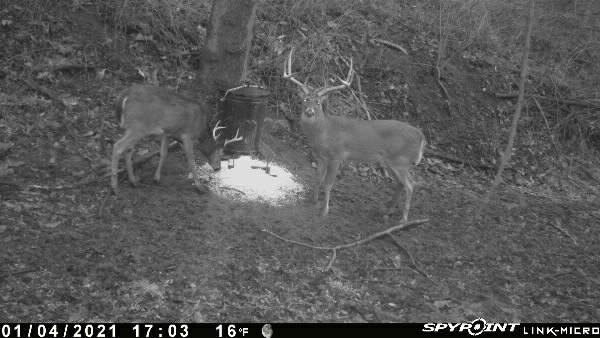 I got up Tues but was tagged out, Zak ... slept in and I let the lad sleep and just made some coffee and went and sat on the deck and chilled in a great sense of an accomplished season. Zak had brought his new compound but wasn't fully checked out in it for hunting. He sat the afternoon evening but only a couple fawns rolled past. And that was a wrap for the 20-21 whitetail season. I missed the mature doe cull by 3 on the 100 acres. We'll see how it turns out next year - I'm moving a number of plots to principality fall/winter food sources to try and move the does out off the land during summer. We got the deer processed Friday, perfect weather for hanging, and packaged for his trip home. I donated mine to him as my daughter is in out West an hour for him. He gets the short meat supply run. 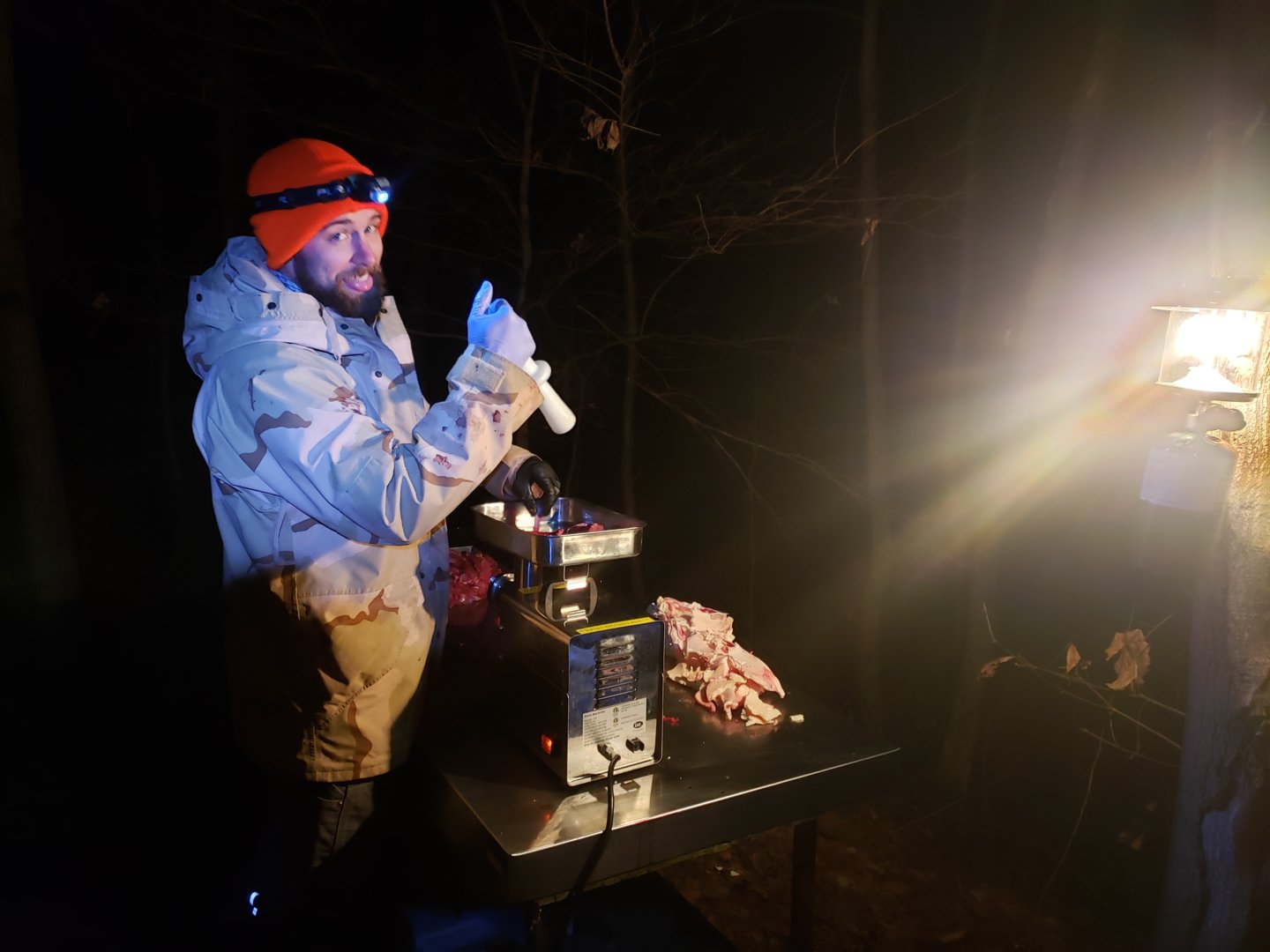 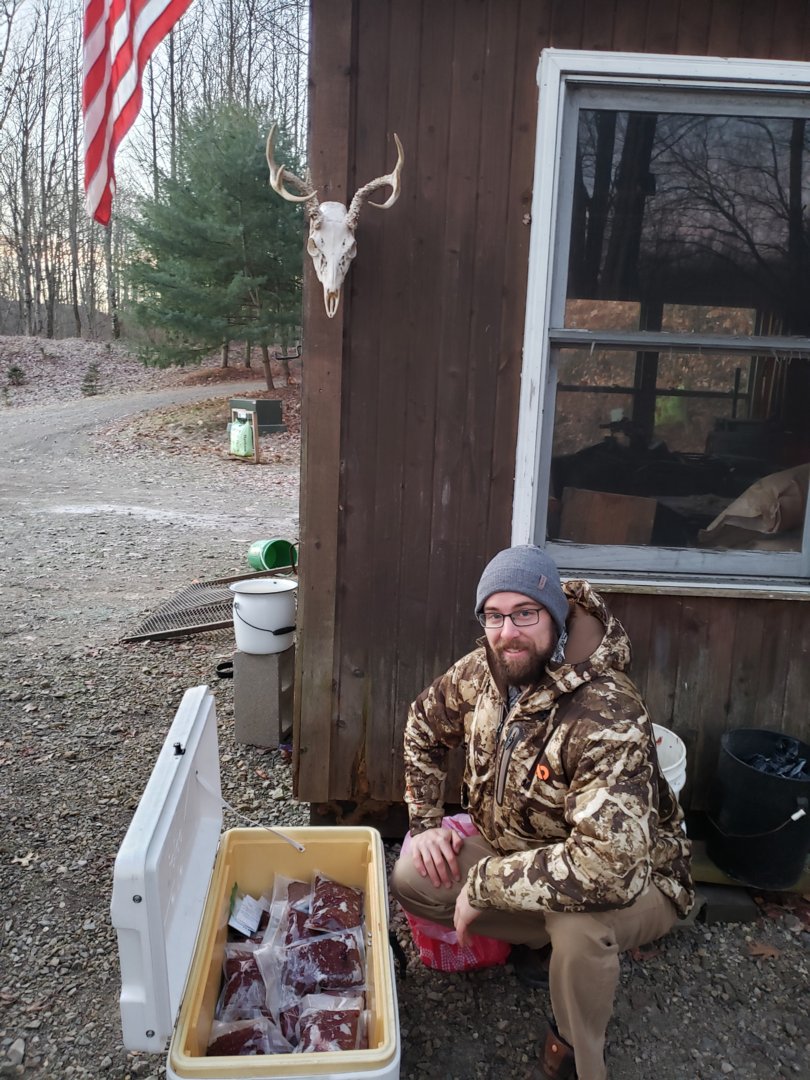 The cereal rye fields we created this fall did very well. The South side (right side on photo) of the field had been getting shade so I took a note to get after that... Note the ditch that runs the length of the field. 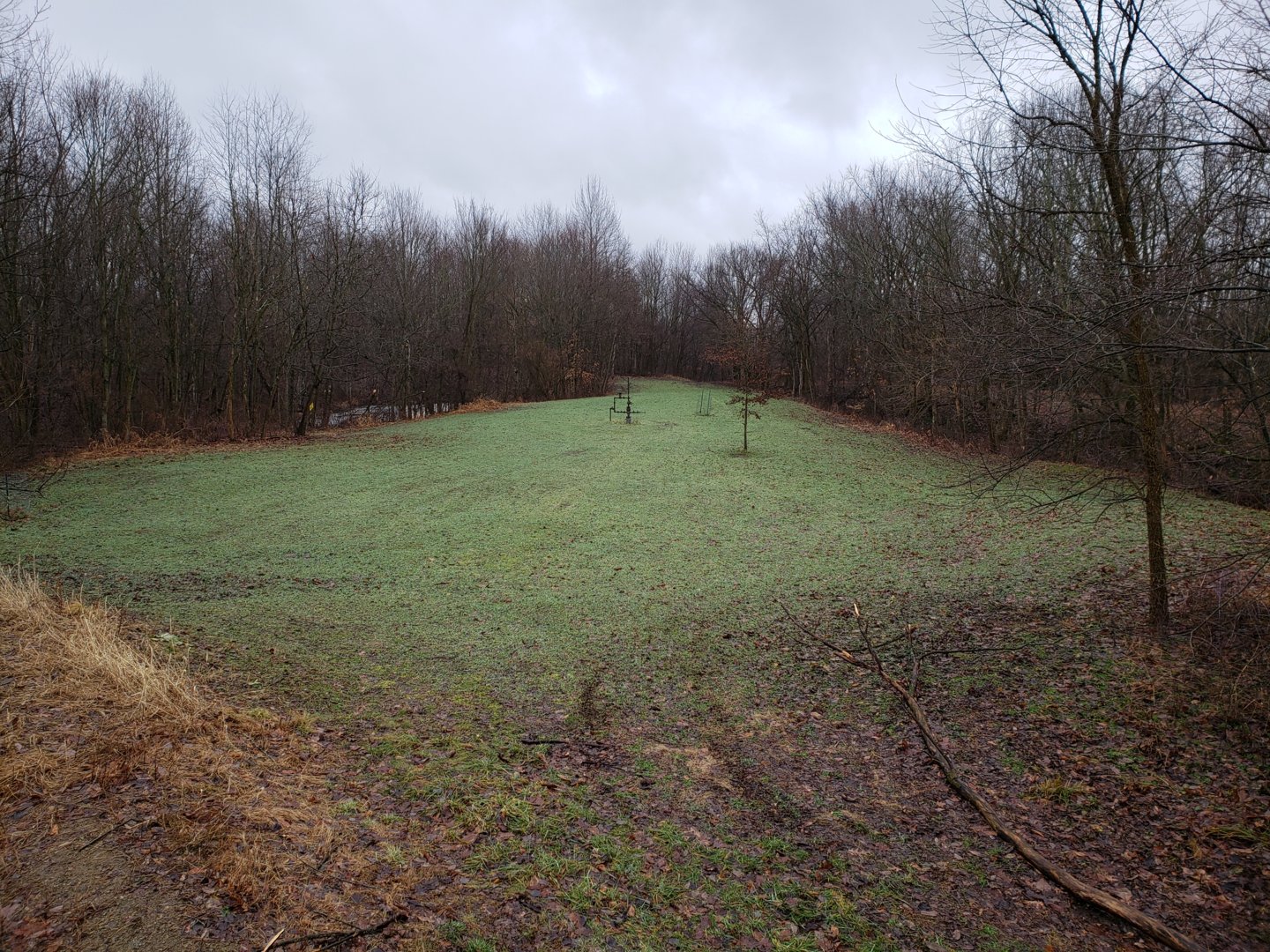 So once again my buddy Chris rolled in and we got after the junk trees that had been slowly overtaking the field. A good shot to give perspective of that gully. Got my new bike involved, I call her Red, and winched some big ones over the hinge right down the middle of the gully. 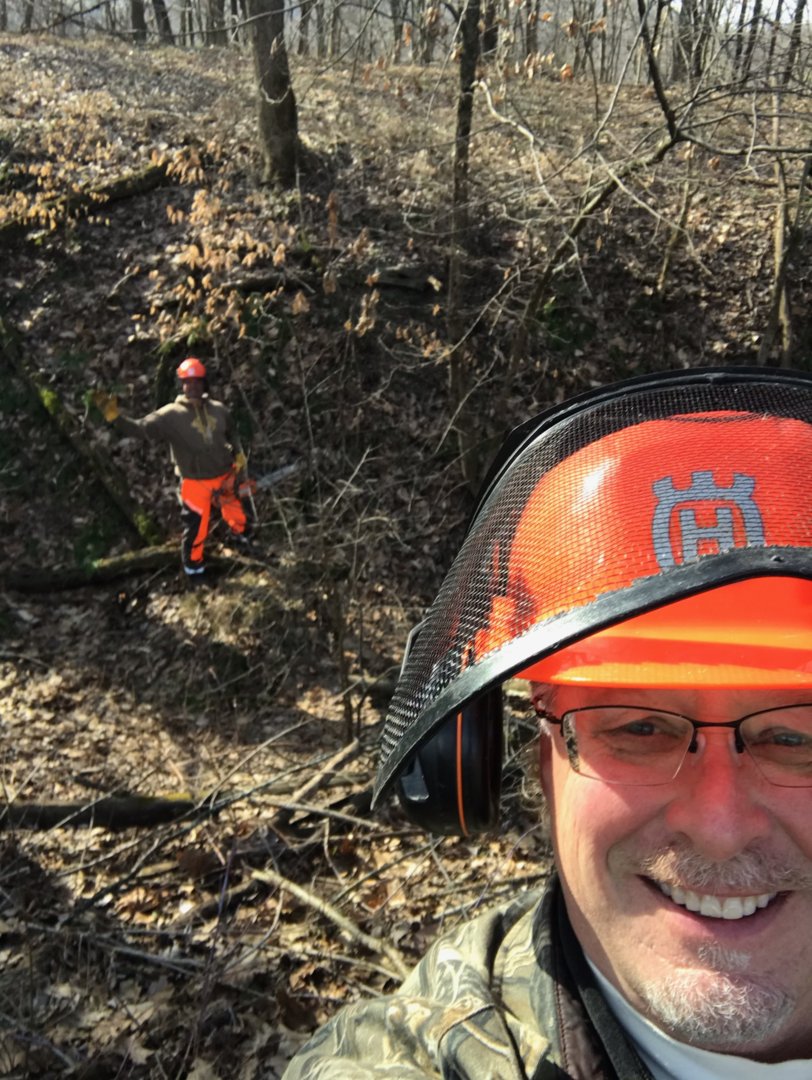 We spent about 5 hours on it, lots of breaks water and beer for our old butts and got about 80% done. 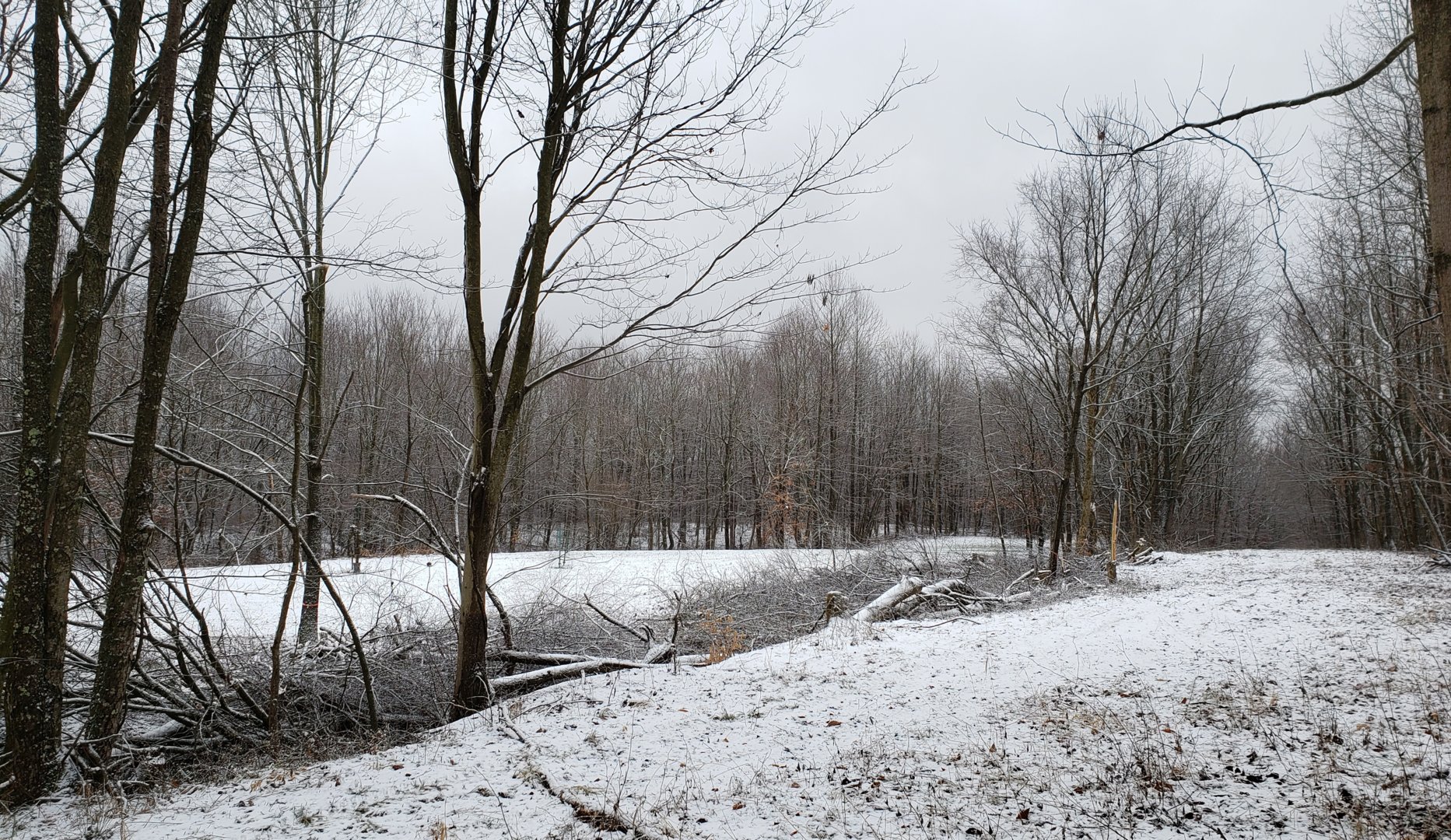 I left the oaks. I think in a number of years it'll be a beautiful hunting spot, productive and a fence of oaks. Still have about a 4 manhours of work to get it done but that's for a nice afternoon during turkey season. Gonna lime and fertilize the strip to the right and get another 1/4 acre of plot with the gully growing up and a 8' switchgrass strip on one side of the gully ... should be grand.

No time at camp is complete without a good fire and we had pyro's aplenty around. Took the young man and we got the rest of the old beech on the fire and had the yule logs going for days.

Put some work into "this old farm' in 2020, hunted in the first week or so of 2021 and it still produced some meat for the table, with an awsume opportunity at a quality buck that must have 50 lives!

Thanks to everyone that tagged along on this Stressless Compendium. I took the video below, after putttin the Mrs on a plane home and the boy left for his home a week ago Sunday, while in a great mood, I love my camp alone time, I felt quite an accomplishment in this crazy year of 2020. I'm quite sure the clip may not bring quite the sense of awe to you that I feel, but I like to sit at home, turn down the lights pour a tumbler of whisky and put it on loop... I hope it does bring a smile and that you can, in your own way enjoy it.

The end of 20-21 season is here. I was able to confirm some named bucks made it through the season. 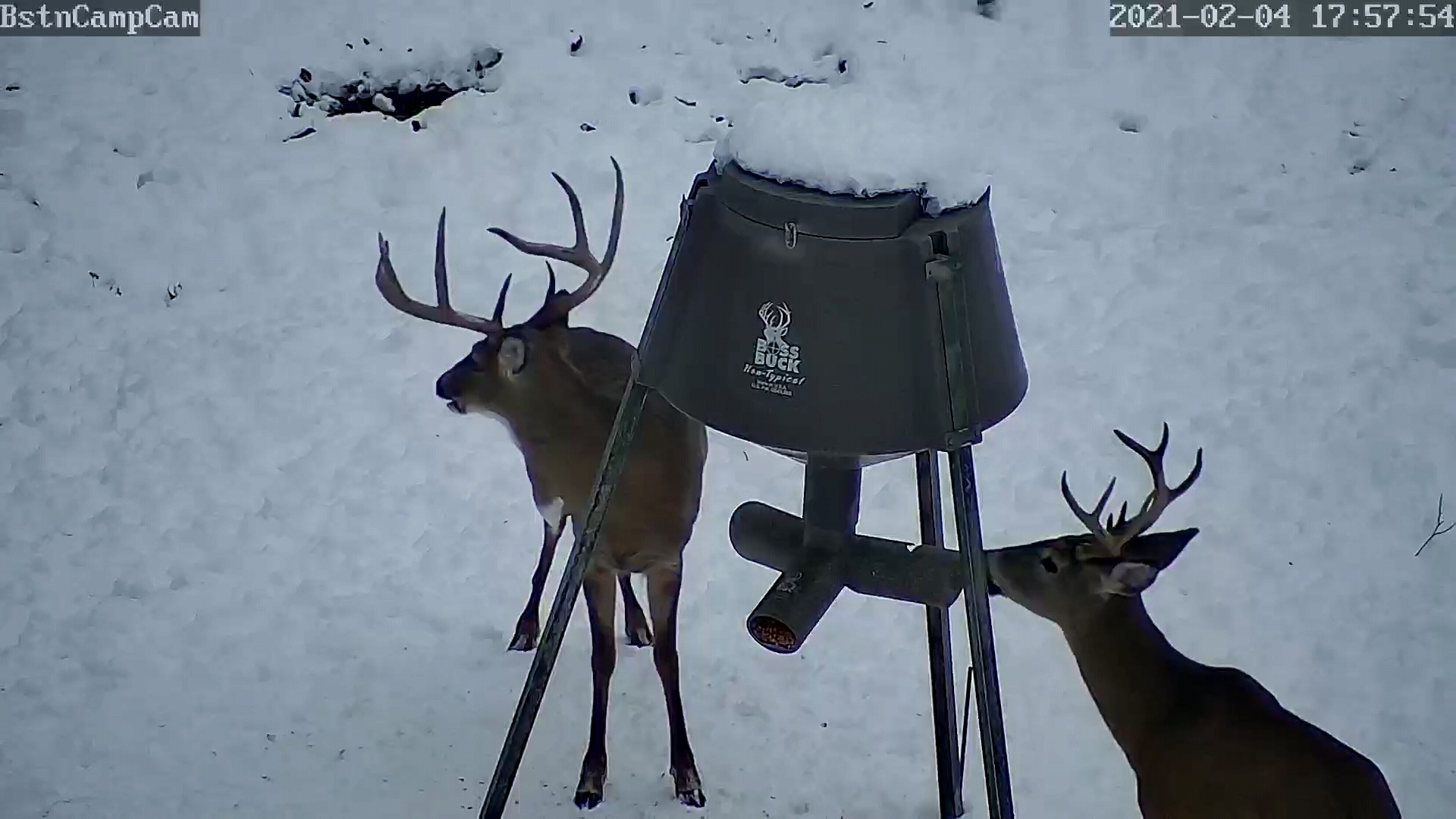 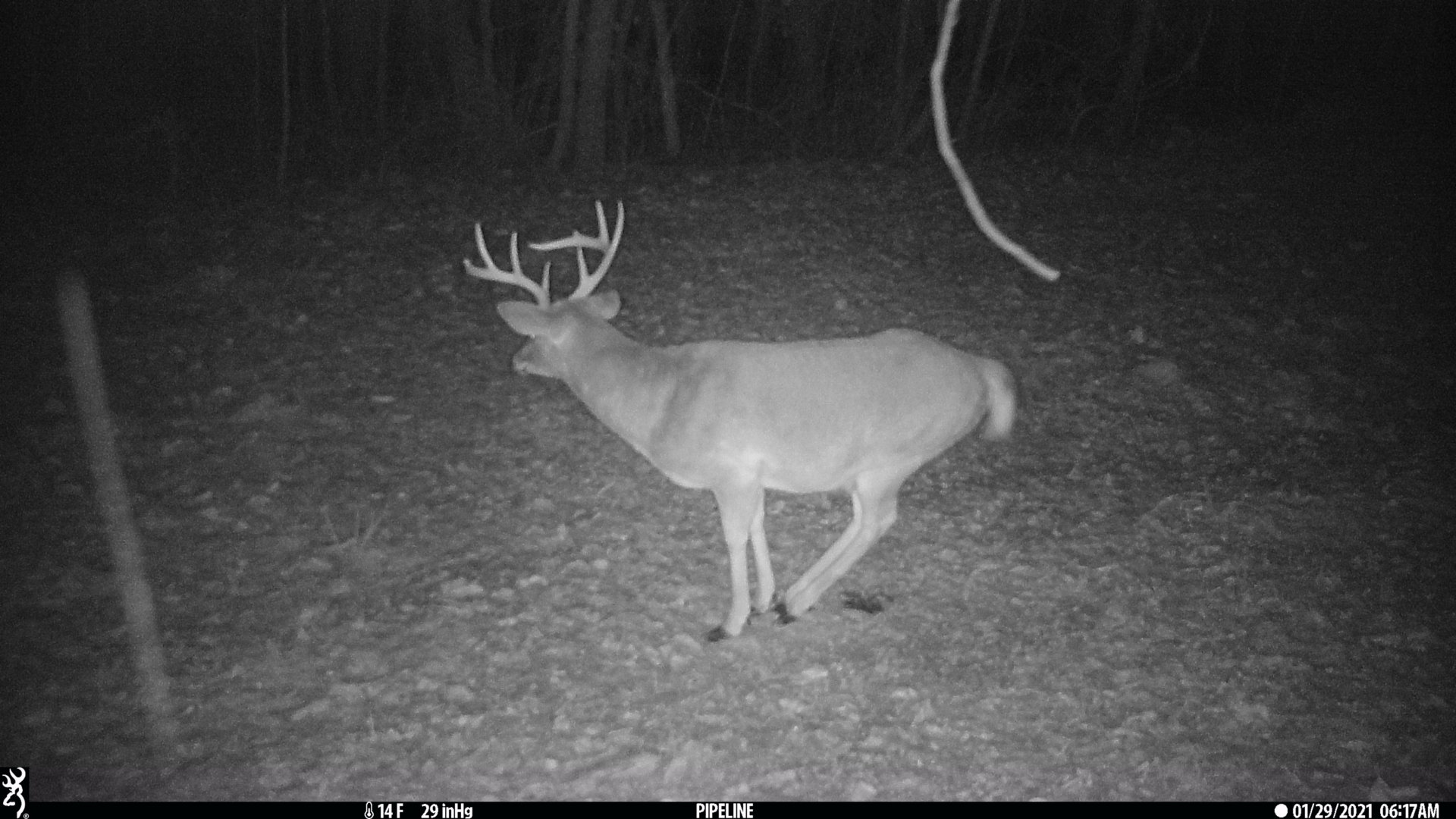 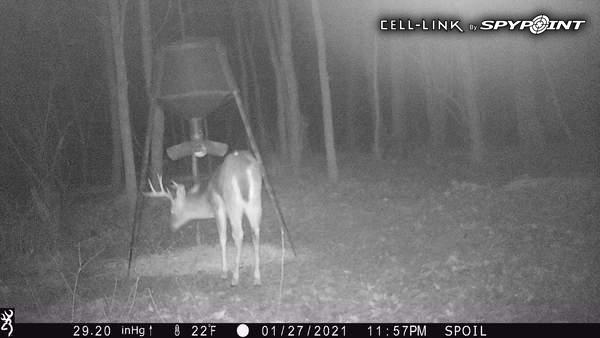 Sheds will be dropping over the next month, so we'll pick this back up again with any any returning gents keeping their year/name and new bucks coming in getting their moniker from the "Seinfeld" list of characters in velvet say about August.

Been a bunch of fun keeping up with this thread, reading everyone's hunting woe's and success's thru the journals - looking forward to next whitetail season this fall and turkey season in a couple months.