I am sitting here at work this morning and was thinking. Ya... I know, sounds pain staking doesnt it? Anyway, as many of you know deer corrupt my brain 99% of the time. I truly believe I have a sickness. For some reason I just am having a hard time swallowing this years events. Its almost as if it is to good to be true and I keep turning around and looknig behind my back, just waiting for something bad to happen.

Novemeber has always had a sweet spot in my Favorites. Although, after this year....It is deffinately on the top of my favorites.

I would like to take you one a walk through sweet November with me and the events leading up to it. Hopefully you will enjoy it as much as I have!


MY best friend brett is a good friend of mine that shares the same passion for whitetails as I do. Maybe....well deff. not to the extent as I do, but he loves to run cams and hunt them. He makes fun of me all the time telling me I have a serious problem and I need to go get helP! ha He and I run cams all summer in various spots through out our local area. HE started getting photos of a buck he named 2G4 for obvious reasons. 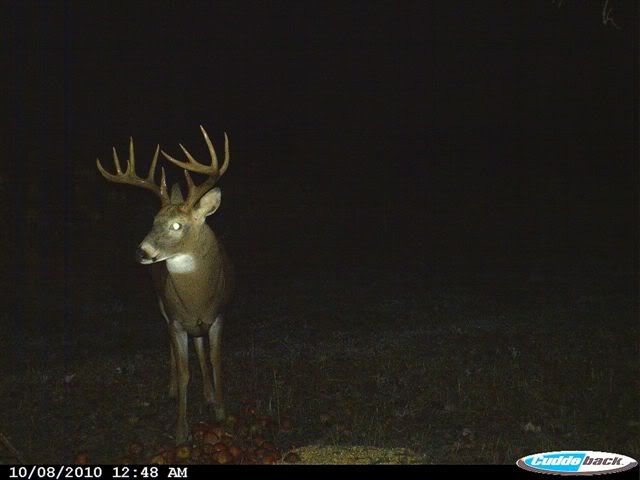 This deer was super elusive and was actually captured on cam by my good friend Jamie over a mile away. Jamie also happens to be who owns All American Outdoors in Strasburg, the shop I shoot for. Brett never once had a daylight photo of this deer. On nov. 1st I was driving home and saw a good buck in the field with my headlights at like midnight. I knew instantly who it was. I called brett the next day and told him 2G4 was in the area. We knew he was close, but agian, the deer was never around in daylight.

On November 2nd Brett posted up in a stand we call the "Spine Tingler." At about 6pm 2G4 made his first daylight appearance, only to be Raged by my good buddy brett! I got the call and was super pumped, glad to hear he put him down. He was actually a bit bigger than we had thought he was. Super mass and great beams and decent tines. 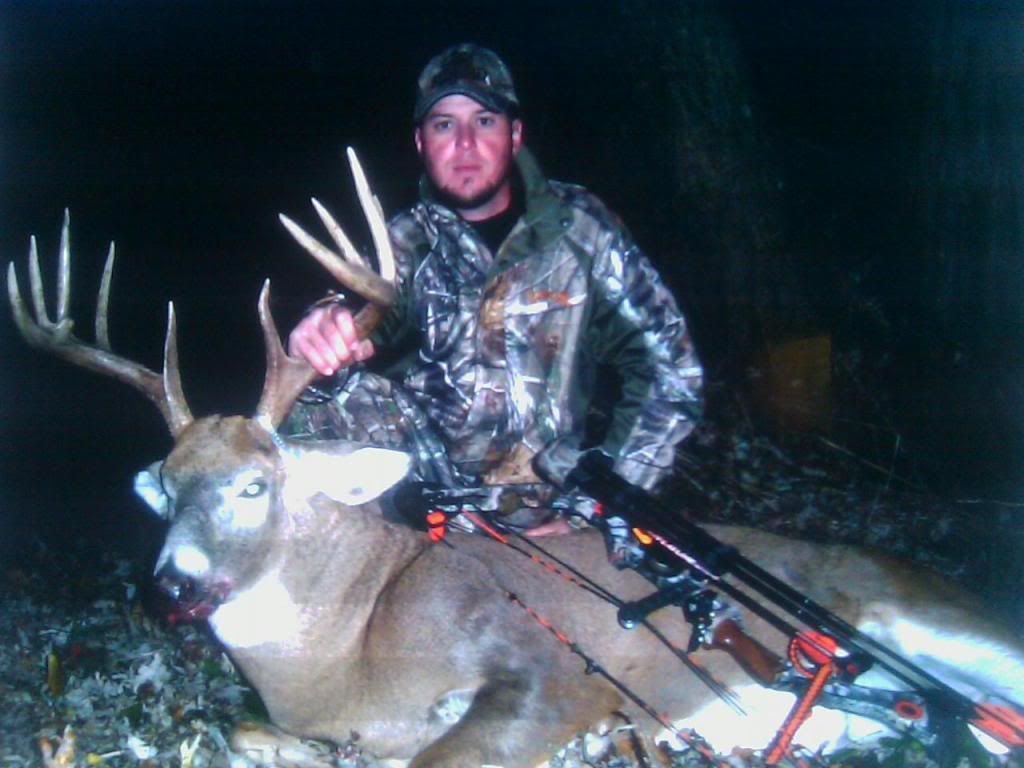 Little did I know that Travis, my good buddy who was in from Texas hunting with us also had a great night. HE then called me and say he just missed a giant. Although, we later found out he didnt miss it. THe buck he shot we had to history with. We had no trail cam photos of or nothing. He just showed up out of no where. The next day Trav and Brett went to find his deer, 500 yards later, lieing in a crick, travs deer was recovered. Unfortunately the yotes got to it sooner than they did! 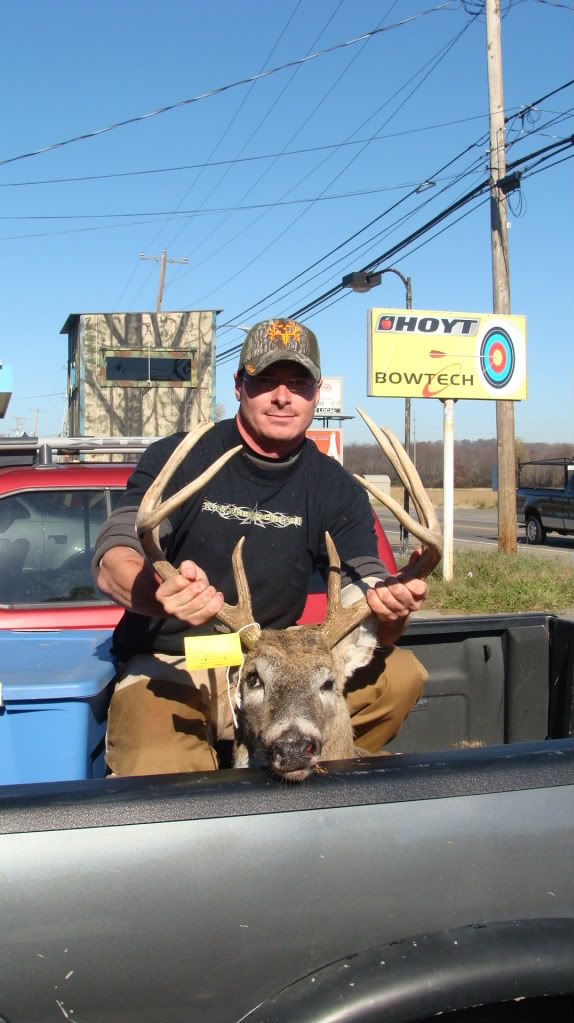 I am starting to get a little antsy at this point. Im seeing good bucks falling and Im not seeing anything I was wanting to shoot. That is until I checked the cam at the new farm I obtained this year. I had hung a stand for my dad and threw a cam out to see whta deer were there. Man were we surprised! 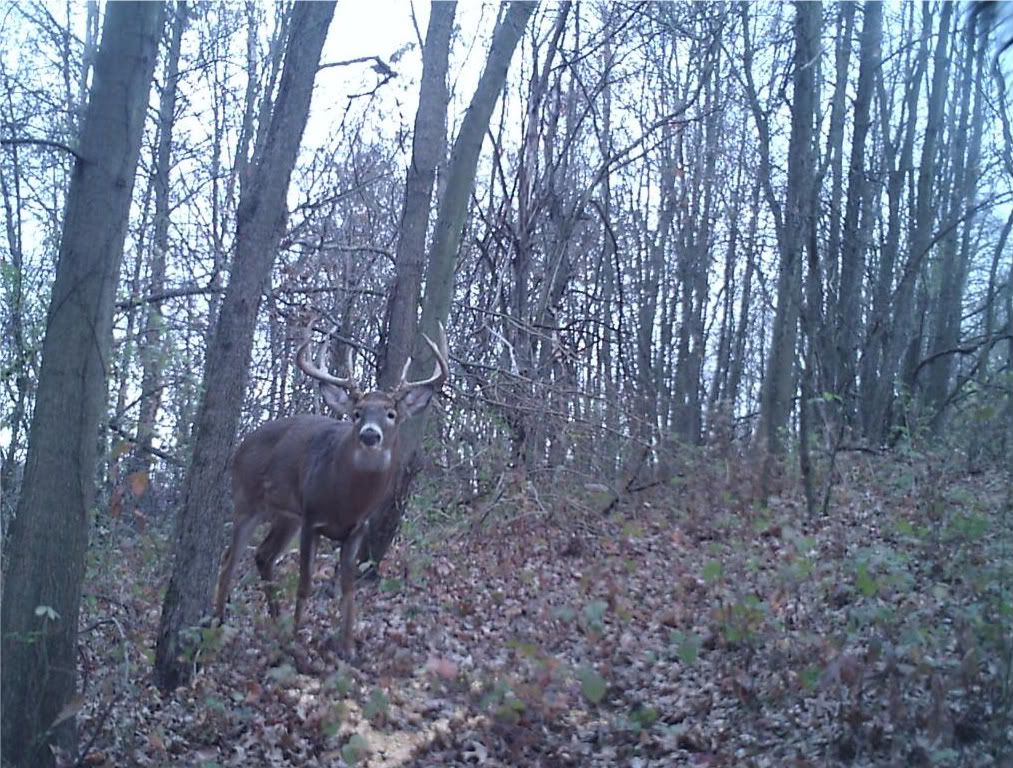 Instantly I knew this was a 140 inch deer. I had alreayd promised my dad this stand, so me hunting this spot was out of the question. Now I jsut had toget my dad motivated to hunt it. His week annual week long rut vacation started Nov.8th. He sat in the morning and didnt see anything. HE arrived early monday afternoon to the stand and began his hunt. Not a single deer came though. That is until 5 oclockrolled around, out of the brush came The Farm Stead buck. The rest is History

Then I started getting really antsy. As many of you know, and criticized me for me little girl like attitude! haha Thanks guys!

THe buck that I had drempt about all year had disapeared and was gone. That is until Monday Nov. 15. I had a great history with this deer. Last years photos and sightings. Passed him 2 times last year, along with my buddy passing him several times. We knew he had great potential, and we....well I am glad we both passed him last year. ha
HE first arrived in mid Ocotber this year, much like last year. 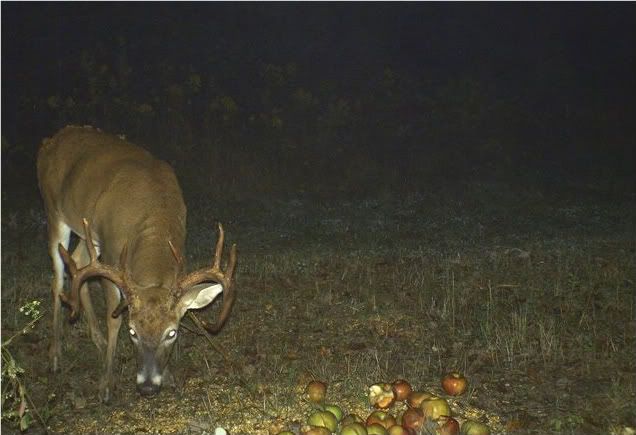 He made a very wiley advancement in wits this year. He becamse more nocturnal and was a diff animal mentally. His patterns changed and wasnt as predictable as he once was last year. Luckily for me on Nov 18th, we would have a interview, and Roamer was hired for a position on my wall! 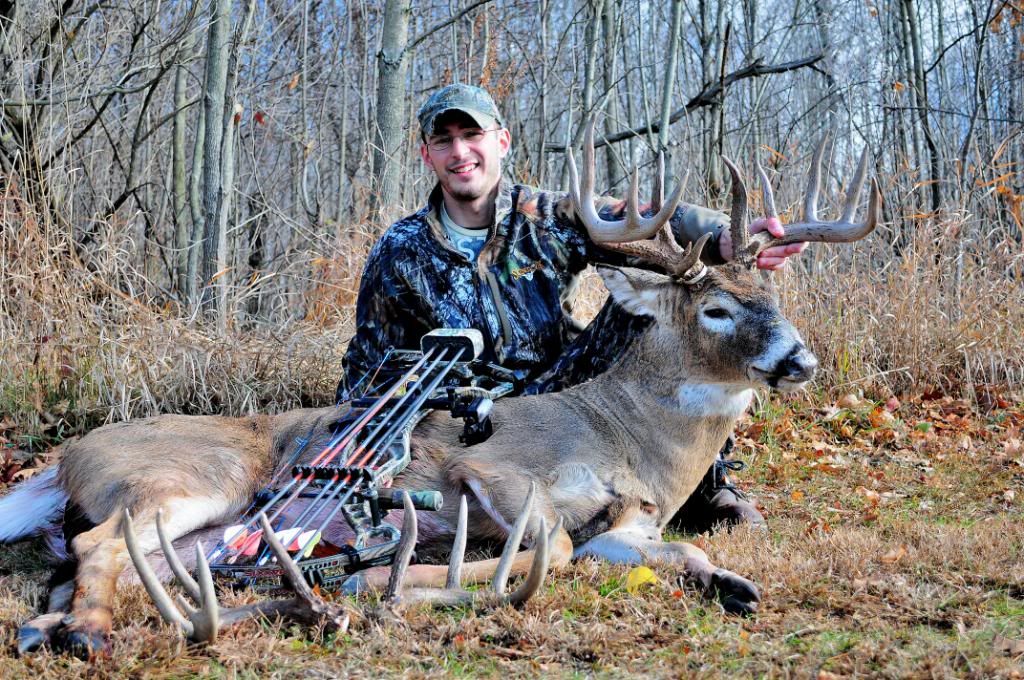 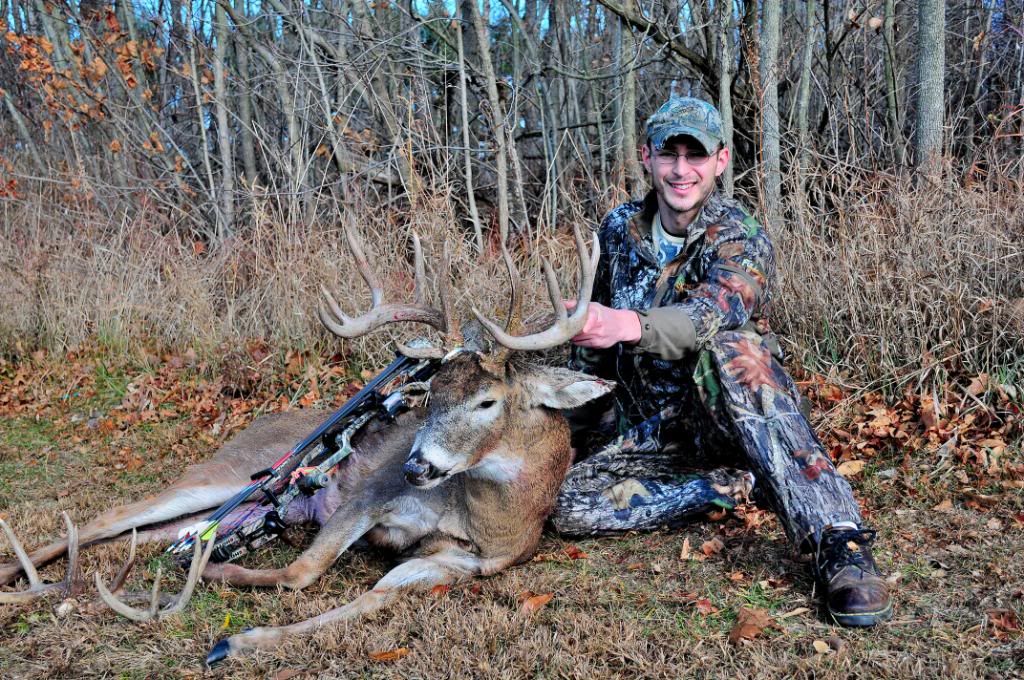 As I said before, this year has been a Dream Season. I have never witnessed anything like it. I am blessed to be in the middle of it and can only hope and pray that everyone of you someday get to experience the feeling that I have over the last month! I dont know why or how, but whatever the reason this year has been a god send. I will never forget the November of 2010, nor will the people involved. To say we are blessed is an understatement, we are very lucky as sportsman to be able to experience this luxury that we love and call the outdoors. Sorry so lengthy, but this year has been a very special one for me, and I wanted to share the time line!

Great read Kaiser. Lots of good bucks there. Really cool to see everyone being succsessfull.
What did all these bucks score?:smiley_blink::smiley_blink:
U

Awesome stuff there Kaiser. Great story and I loved the photos along with it. I can only hope to have a season like that sometime in my life. Awesome job...that hard work all paid off!

Great read Kaiser, and congrats on the Dream Season that you've had so far. I really enjoyed reading the recap, and the pictures you put along with it. Nice job. You guys have definitely put some great deer on the ground. Congrats again! :smiley_cheers:

Diablo54 said:
Great read Kaiser. Lots of good bucks there. Really cool to see everyone being succsessfull.
What did all these bucks score?:smiley_blink::smiley_blink:
Click to expand...

You'll enjoy this season for years to come! Great pics and story:smiley_beard:

Thanks for rubbing it in, man...

Congrats and a great season brother. You definitely live in the heart of it all!!!

Way to go man, super nice deer. IMO if your deer scored 158...then it's 158!! Deductions are stupid...but then again thats just my opinion :smiley_blink:

Nets are for fish.

Hell buddy that's awesome.. Awful good of you as a friend and a son to put your buddy and father on deer like that before your own. I'm happy that you had a fulfilling season. Good to see some pics of you with a monster that didn't have that goofy hobo sock on your head.. He'll for a while i thought it was your natural hair.. :smiley_blink: Congrats to all again.. BTW.. You still have that 6pt tied to a tree for me don't ya? :smiley_confused_vra:smiley_blink::smiley_blink: