First a little background. Alex (TripleA88) and I've been watching and listening to birds on my place and his for the past month. Both properties the birds were flowing a script. Mine shut up and disappeared Saturday of youth and haven't been see since. Alex's bird continued and met his demise Monday morning. So Alex goes back out yesterday to listen at his property and hears a bird gobble 4 times on the back side of a wooded hill across a green field. "He's back there" he told me.. "But I bet he's with hens, we can get in there maybe 150 yards from him and try to fire up his hens, He can go north or south, worth a shot."

5:00am this morning i met Alex at Speedway, and we make the drive to his property. As we walk through the green field towards the woods the wind is calm and it's misting rain. A perfect turkey killing day. We start down a small logging road that enters the woods in the direction the bird was roosted the previous morning. I had been to this spot before with him scouting pre-season, and once roosting birds. We're maybe 50 yards down the path with another 100 to go before reaching a small green clearing in the bottom that will be our setup.. Keeping our eyes in the trees Alex stops and kind of shifts his head around then points... "Bird" he whispers.. We take a moment and scan the surrounding trees.. "I mention that's a big bird and looks to be a tom" "You wanna back out and try to call him up to the field, or keep going" Lets keep going i said, try and get those deeks where he can see them..

Alex starts sneaking slowly down the path, i let him get 20 yards out front and follow, the idea is to appear like deer in the night. We literally have to walk DIRECTLY under this bird roosted 50 feet above our heads.. We reach the field and get the deeks out where we think he can see them.. A jake and a hen.... We pick a spot about 20 yards up an opposite rise. Alex tucks back against a big tree under a Amur Honeysuckle bush. I'm on a telephone pole sized tree maybe 4 feet to his right with a good lane to the deeks.. The deeks are to out 12 o'clock the bird 100 yards to our 10.

The sun starts to rise and alex gives some ever so soft tree yelps. Nothing. The thought "hen" goes through my mind. Then Gobbbbbble. Alex waits and he Gobbles again.. More soft yelps.. nothing. Eventually Alex coaxes a response gobble.. As the sky get lighter the bird gets more interested. He's answering, and Alex is just reeling him in, slowly turning it up.. I can't see the bird, but Alex can. By this time i am regretting that in my excitement i forgot to spit my dip before donning my facemask. Ad I've got about a half mouth full of spit.. Decision time. Hold it, Or just spit in the mask and let it run... ughhhh fuggin nasty.. I hold out longer.. By now Alex is cutting at the Tom then shutting up.. And that tom is reading the script. Alex would hush and ole tom would gobble, double gobble, and just choke in mid gobble.. Alex would wait and turn it up again.. This tom had to have hammered a minimum of 50 times in that 20 minutes... HOOKED! Later alex told me he was strutting the limb.

The wind picked up and a brief one minute rain came.. But calmed right back down.. Damn.. The bird went silent.. We wait... Alex calls.. Nothing.... Then... I see the bird pitch! But not directly to us. Double Damn. The next thing i see is 15 yards in front of us a bird in a high bank turn not 20 feet off the deck.. Spread out, fanned out plum sideways coming in hot! He's making the curve around a small bushy tree in the clearing that's maybe 20 foot tall.. He hooked a Big J shape and landed between us and the deeks.. But he's behind some blackberry bushes and not in my lane.. "Bust him" Alex says with a hint of "NOW" in his whisper. The bird spins on a dime, Stands straight up tall and is eying the jake fiercely.. He takes two steps and i can see his neck in a small clearing in the brush.... BAM!!! The gun barks, brush and feathers fly, and i swallowed half the wintergreen spit reserve i was hording like a chipmunk.... 6:55 am!

Alex tries to say "There is you bird and that 13 year monkey off your back" But really it just comes out as.. "Bird, monkey uhm bird, back, uhm 13, monkey" lol The bird is on it's back, feet straight up doing the dying cockroach flapping.. I jump up and throw my hat, face mask, and leafy jacket off. Spit the rest of the dip. I turned and just tackled Alex right there in the field, damn near landing us in the briers when we hit the ground.. lol.. Textbook..

Alex read that bird the script and he came sailing in like a B-52 into a hot LZ. He was 20 feet off the ground! Spread out, fanned out sideways, making a big hooking J for his landing! All 20 yards in front of our face! They don't all happen like that boys, but when they do, it's one you'll bore your grandkids with 1,000 times. 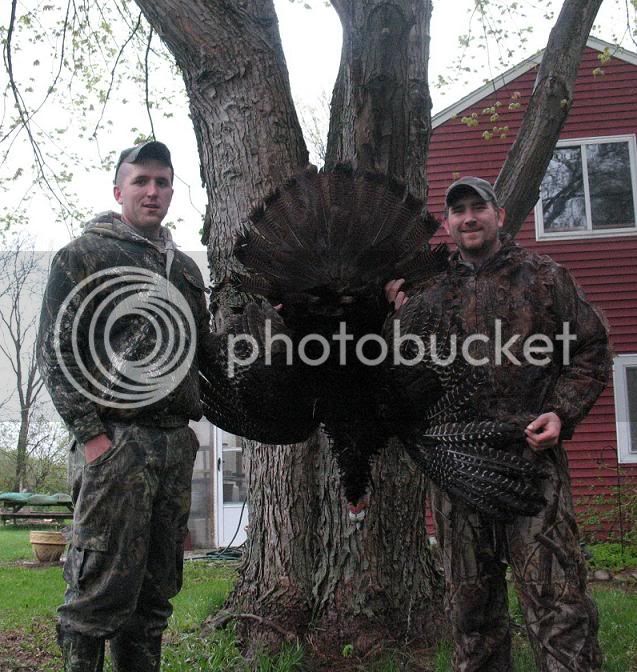 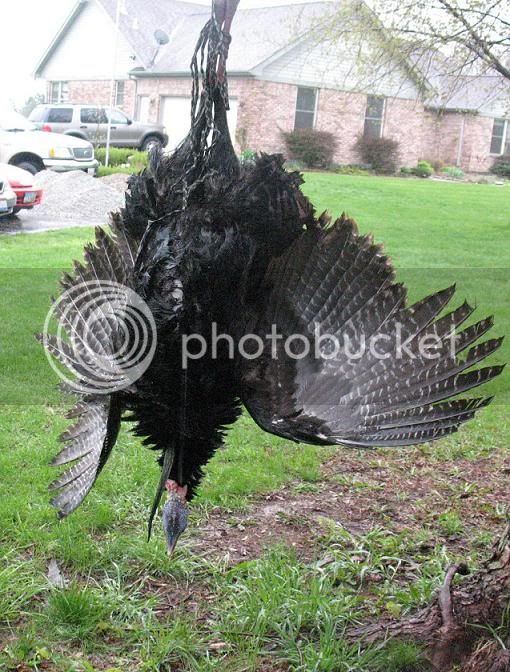 Congrats on the bird Joe and Alex! Great recap.

freakin nice guys!!! congrats to you both!!

sent from my HTC evo

Hell of a story man! You gotta love it when everything happens just right like that. Great bird... great story... great pics... great hunt. Congrats!!!

Nothing beats a textbook hunt. Congrats to you both.

Conrats Joe!! Great read followed up with some good photo's.

Awesome hunt fellas. Sure hope mine can go half as well tommorrow morning. Congrats on an awesome bird.

Outstanding..... Glad to see Alex and you get it done.... Memories of a lifetime are times like that.....

Man that was an awesome story! Congrats man!