Thoughts on what this "scar" could be?

Just wondering if anyone has seen anything like this before and what the cause could be. This is the first time to see this small buck... 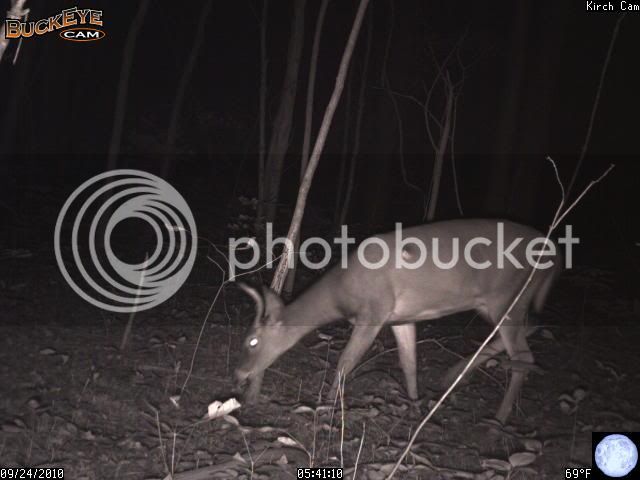 if you are in a tree at about fifteen yards and he is quartering away, looks like a target to me.

dante322 said:
if you are in a tree at about fifteen yards and he is quartering away, looks like a target to me.

BTW... hes pretty bulky for a spike. lots of potential there.

dante322 said:
BTW... hes pretty bulky for a spike. lots of potential there.
Click to expand...


I was thinking the same thing, he has got some bulk to him.

Could have come from someone holding to high and just cutting the far side of his back.

I would say its an old arrow from a bad shot or a cist of some kind. He definately doesnt look unhealthy from it. Hes got someserious body mass.

Could be an arrow wound, but I doubt a deer would survive a shot that hit there... from a treestand at least. IMO, it looks like a bug flying in the air between the cam and the deer. To me, it looks like there is a shadow behind it. I could be wrong, but I know I get a lot of flying insects in my trail cam pics at night. Hopefully you get some more pics of that deer. It's tought to confirm anything after just one pic.

An infected cut from crawling under a barb wire fence.

A moth flying straight up slightly to the right. There is a shadow being casted on the deer about 12 o'clock. It appears it's pretty close to the deers body, less than a foot. IMO:smiley_bril:

I tried to throw a spear at him last season...didnt throw hard enough. I hoped i didnt hurt him too bad. Good to see he made it.:smiley_bril:

I copied the pic and brought it up on a LCD/LED screen (4 color) and then split the color and you can see its a bug of some kind (a big one)lol
Last edited: Sep 24, 2010