I made it out this morning. I saw a half dozen antlerless deer. I did see a solid buck as I was driving along the creek an hour before sunrise.

Mason pulled a card today and found that his target buck went through the fence gap numerous times over the last few days. Twice in daylight. There have been a pile of does in there and we expected to see him show up there. If I hunt in the morning, that’s where I will be.
Likes: finelyshedded, hickslawns, Sgt Fury and 3 others

I had not planned to tell any long-winded deer stories this year....

Mason and I had no giants on camera all year. Good deer but nothing great. We have one that is maybe 160 that has been regular and has probably become killable in the last week or so, but we are kinda hoping he makes it another year or two. So Mason asked if we could hang a camera on a piece we pheasant hunt this week. I’ve never deer hunted the property simply because it does look like a great place for a giant to live. I don’t want to miss out on pheasant hunting because I’m worried about bumping off a big deer. Anyway, I can’t walk well right now and can’t pheasant hunt so Tuesday he and I went to the property to hang a camera. From several years of walking the massive CRP fields and drainages I knew exactly where I wanted the camera. We got it hung and headed for the house. By the time I’d reached the top of the first hill the low air indicator light came on. I told Mason I knew I was going to bust a tire on a freshly bush hogged tree stump and it appeared I did. I called our local tire shop, Bucks Tire Service and told em I was on my way since it was close to quitting time for them. I ran two red lights going through our little town but made it in the bay door before destroying my wheel. The tire however was trashed and needed a new one ordered. Oh well.

Friday afternoon Mason went to check the cam. He brought the card into the pizza shop as I told him not to be late for work. He was late and we were already busy as heck. He snuck away to check the card while no one was looking and found the camera had captured three good bucks, one was exceptional. First time hanging a cam here and we have a really good one to chase!

I have an intimate knowledge of the piece due to having stomped all over it for several years. As soon as I looked at the pics I told Mason we would kill that deer either this weekend or during the regular firearms season. I knew exactly where we would set up, how we would get in, just the whole plan. Cut and dried.

I couldn’t sleep last night. I was out of bed before the alarm, Mason was too. We gathered our gear and headed out. We had made the hike and were settled in by 620, light rain and wind from the NE. Perfect. Mason was positioned 20 feet or so in front of me, looking north into one of the many drainages. I had told him while walking in I suspected we might see the deer cross at a certain point and pointed to a drainage to our south where I expected the deer may come from. I also told him to get his mind right because he was going to get a shot at that giant buck today.

So we sit in silence waiting for the gray light of dawn. As soon as it was light enough to make out what the shadowy figures in the drainages were I started glassing. I had just taken my binoculars down and looked to my left and saw a deer. It was still too gloomy to see well even though we were a full 16 minutes into legal shooting light. I thought I saw antlers but didn’t know for sure. I start the whisper-yelling thing that dad’s know... Mason. Mason. Mason... we’ve done this before so he didn’t turn around and say, “what”, he just started scanning his head left. I knew he saw the deer when his head stopped turning. I looked through the binoculars and sure enough, it’s our deer. I exclaimed, “it’s him” as Mason popped the cover from the scope. The deer started walking down the hill. Mason gave him a “meh...meh”. He stopped while I watched him through the binoculars. The gun blasted as I saw the deer mule kick and take off on his last dash. He was dead within seconds. Mason had made an absolutely perfect shot, blowing the deer’s heart into two nearly equally sized pieces and turning the lungs into jelly.

We watched him flip end over end after a short sprint. We high fives and hooted and hollered. We celebrated like we always do. Even stopped for a couple bottles of celebratory Pepsi on the way home.

Due to social media, Masons squad of red neck buddies and even a couple of mine were waiting for us when we got home. There have been people stopping by all day. In fact, Ed Waite, a Buckmasters scorer, even made the hour and a half drive from Dayton to our home to score the deer. It’s been a wild and fun filled day.

Masons and I shared our last youth hunt together today. It netted his largest buck to date, which is also his first buck ever killed with a firearm. By Buckmasters scoring, he has 24 scorable points and a final score of 234 5/8”!

It’s funny that we spent three entire seasons chasing similar deer to no avail and I. This case, we only knew this deer existed for 15 hours before putting him on the ground. Whitetail hunting can be funny like that. 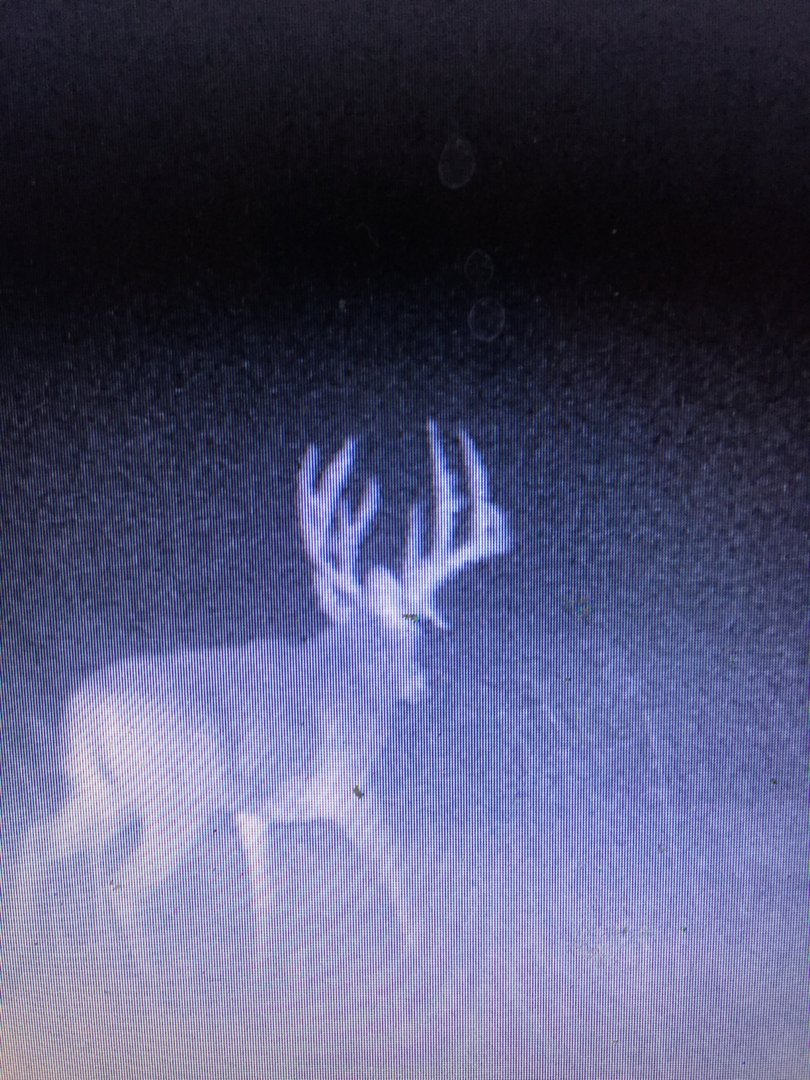 Holy Chit Brock..... Hats off to you and Mason for a SLAMMER of a buck...... Only problem is you know its all down hill from here.... CONGRATS BUDDY....
Likes: xbowguy, finelyshedded and brock ratcliff

Amazing stuff Brock! It's awesome that it happened like that and almost like it was payment for all the hours spent chasing other giants. Hell of a deer!
Likes: xbowguy, finelyshedded and brock ratcliff

Congratulations! Thank you for sharing the story
Likes: xbowguy, brock ratcliff and Outdoorsfellar 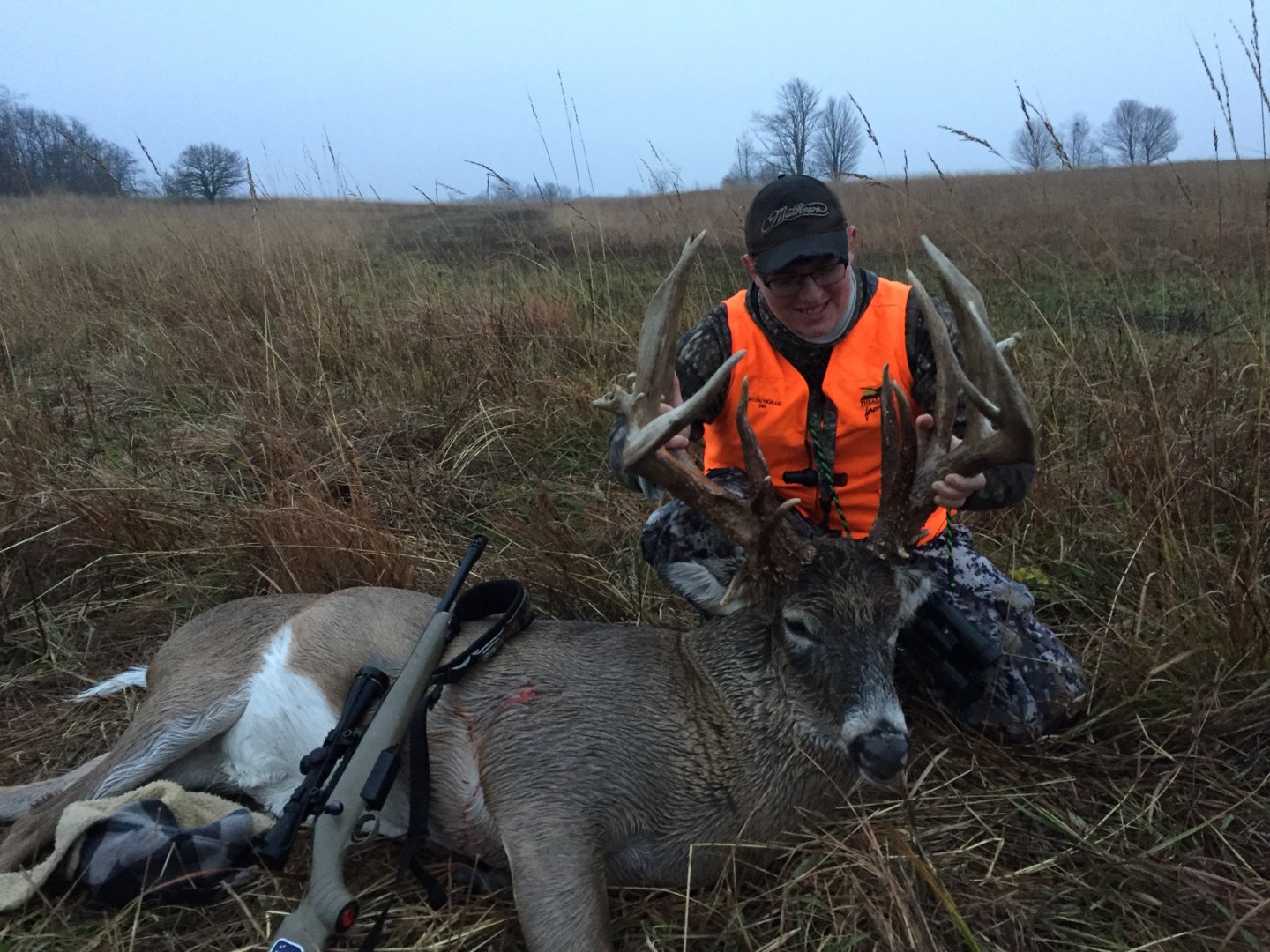 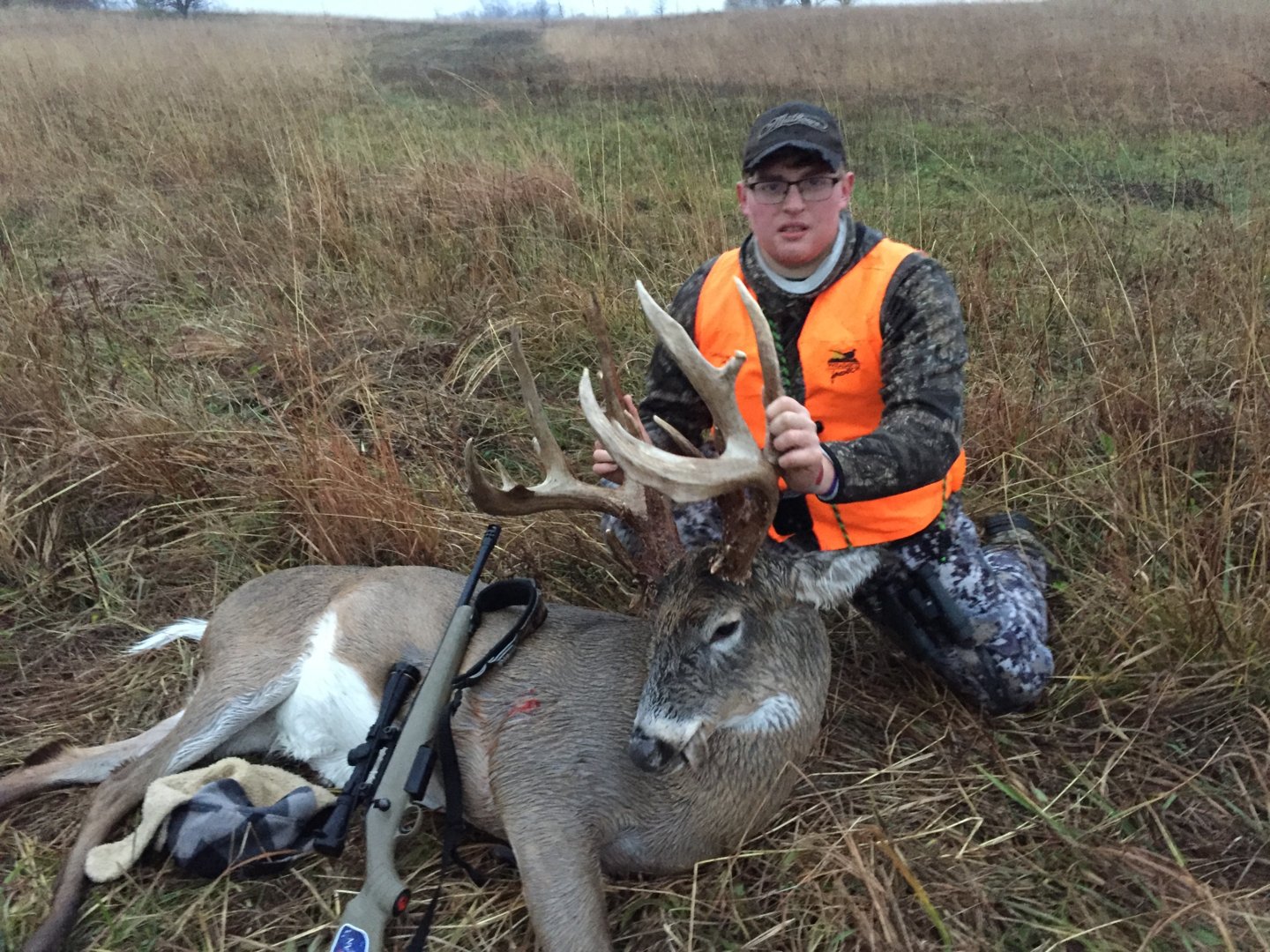 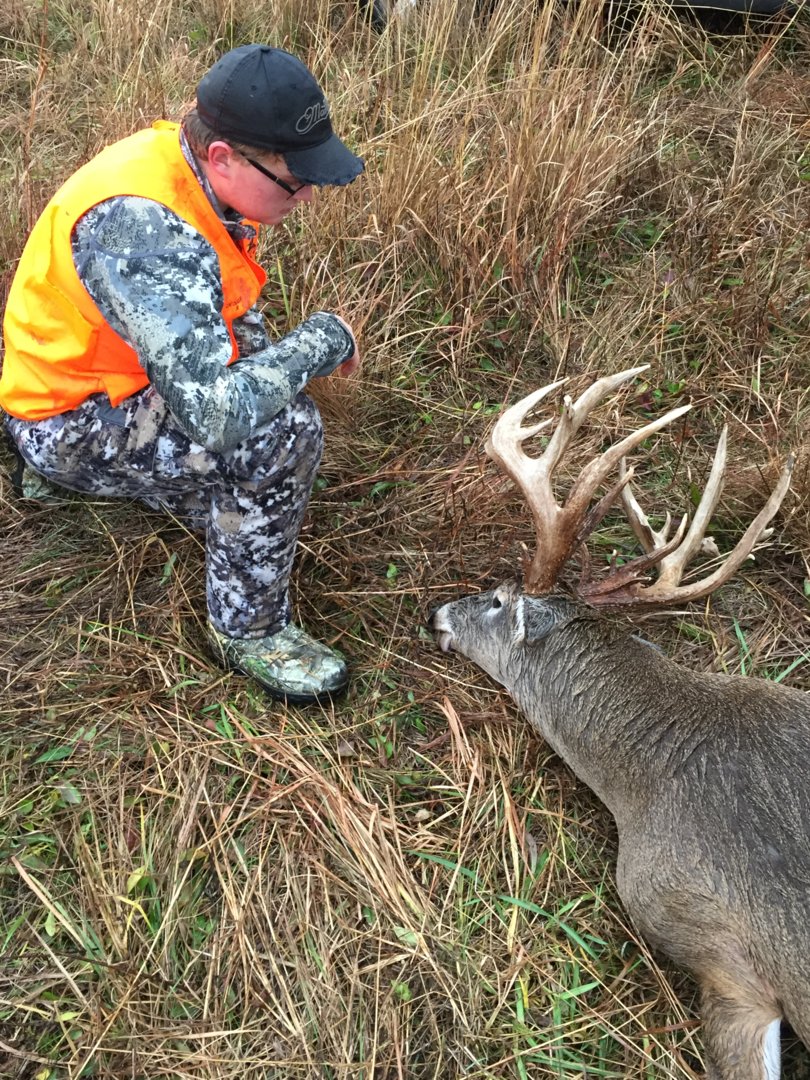 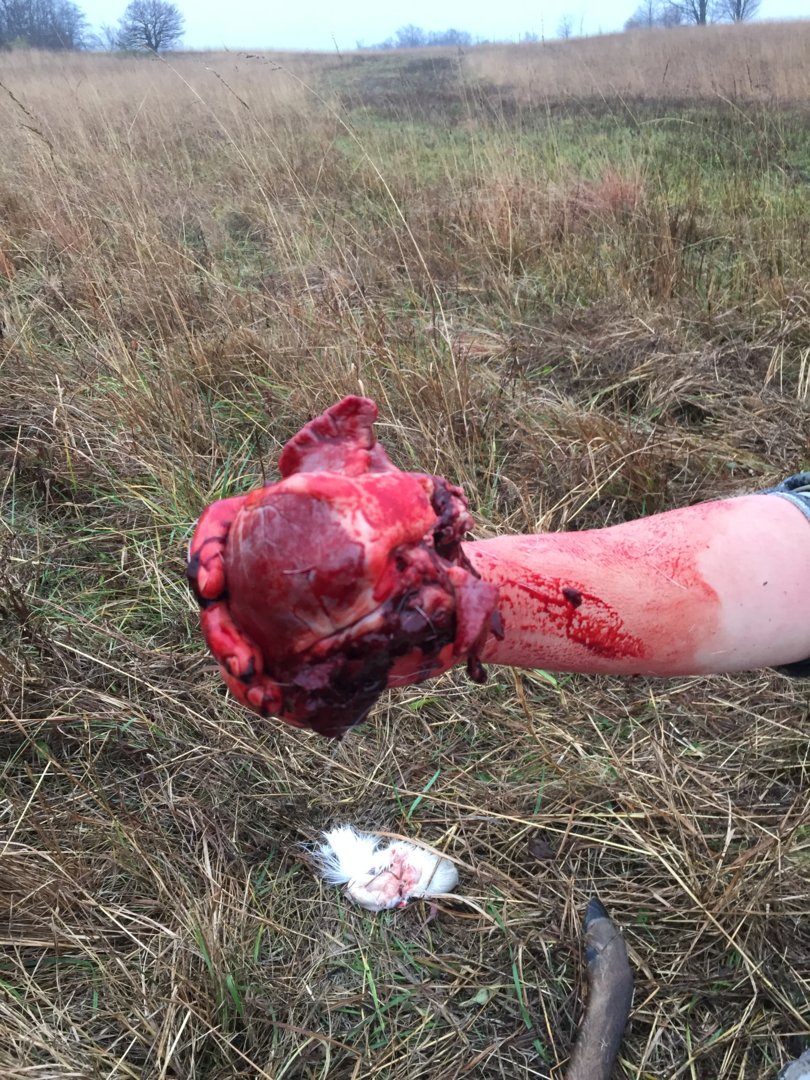 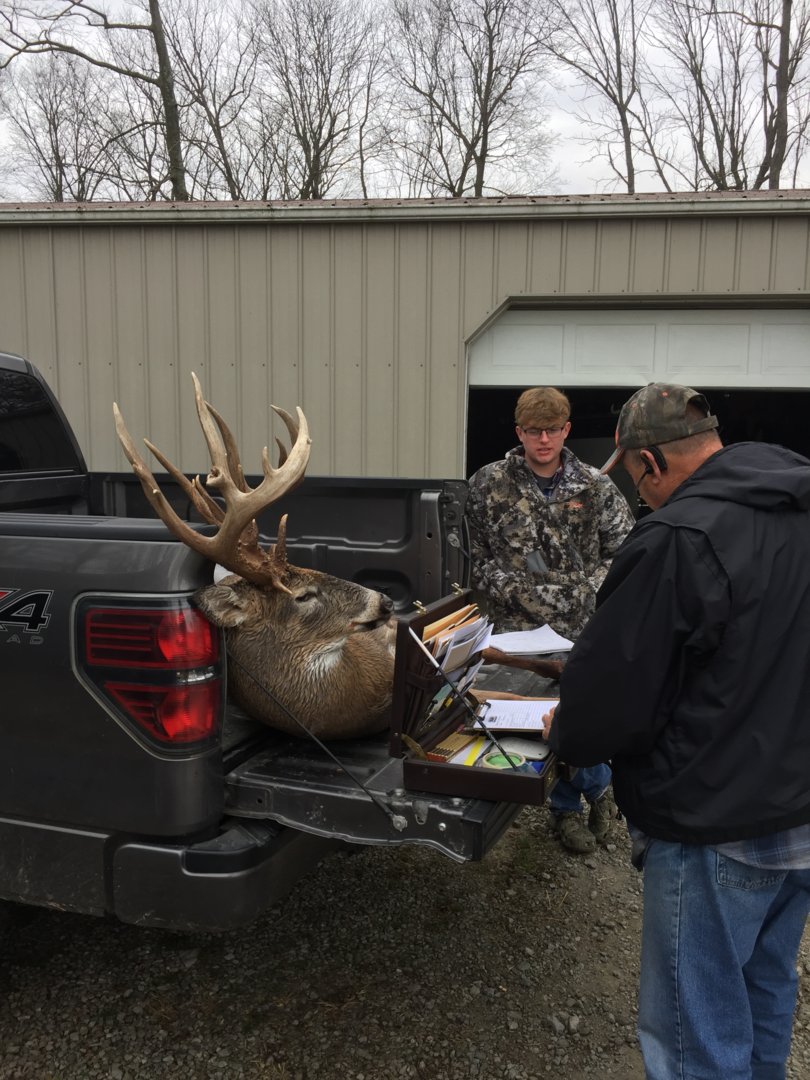 Holy crap what a deer. Congrats!!

That is a true monarch!!! It’s really amazing the outdoorsman Mason has become through your teaching. Just all around impressive man big congrats to you and him! Unbelievable deer!!
Likes: bowhunter1023, finelyshedded, Mike and 1 other person

WTH my lands!!! Any relationship with Tines or Beans??? Awesome for both of you! You both worked your asses off and deserve all of this!
Likes: bowhunter1023, finelyshedded, hickslawns and 1 other person

Congrats to both of you. Outstanding deer mason, you will hunt long and hard trying to top that one.
Likes: brock ratcliff and Mike
S

Wow! What a story and buck!!! Congratulations
Likes: brock ratcliff

aholdren said:
WTH my lands!!! Any relationship with Tines or Beans??? Awesome for both of you! You both worked your asses off and deserve all of this!
Click to expand...
The property is 15 miles from where those two were.

That is so awesome,was excited for you guys when i saw the pics this morning!
Congrats to Mason on taking a giant buck!

Holy smokes! That deer has everything! Long points and mass all the way through...and points coming out everywhere! Congrats to you and Mason on a deer of a lifetime!