Thanks Rich. I can’t hunt him until Sunday evening. Mason was in there this morning and saw just one doe. He did shoot a gray squirrel through the head at 37 yards though. Lol. He had his buddy with him so they got it on video.
Likes: Mike, triple_duece, hickslawns and 1 other person

Mason went back in his target buck’s bedroom tonight. Third time in a row he’s had that deer close enough to kill and did not get him shot. Tonight he was 14 steps to Masons right. He is hunting from a saddle and was not able to turn to shoot him. He’s going back in there tomorrow with high hopes of setting up a little better for a shot. He’s having a lot of fun chasing this deer.
I rode around at dark Spotted three small bucks in a cut bean field near where I’ve been hunting. Mason dropped a camera in there on a scrape line for me before going to his stand today. Can’t wait to check that one
Likes: Jackalope, Bankfish, Isaacorps and 10 others

Mason and I enjoyed a short hunt this morning. He didn’t dress appropriately for the stand he was in. It’s our most productive, but a north wind there is brutal. I had seen five does/fawns, he had seen eight. He said he wanted out of the wind and headed towards me. Soon after he texted I heard a buck grunt. I tried to stop him from walking to me but he didn’t check his phone. The buck was right under me when he noticed Mason walking towards us. He split. He was a really pretty six point. Good times! I hunted from my old saddle today, only 12 feet up. I had one big old doe that is at least 7 ( we’ve known her for years), look up at me but it never occurred to her that I might pose a danger. Hiding behind a tree is awesome!
Here’s some pics I snapped from the phone videos... 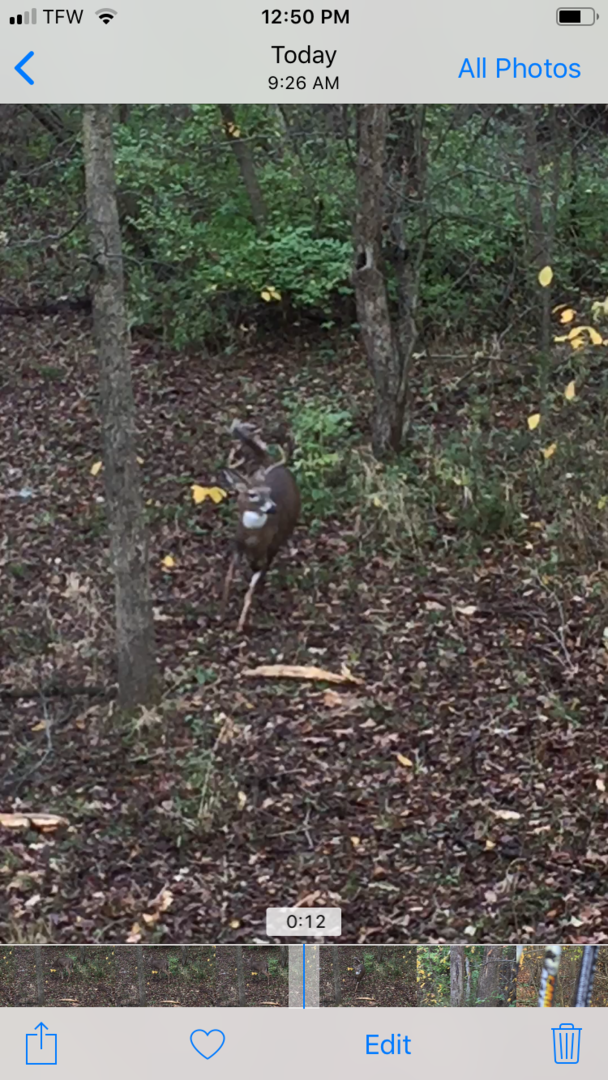 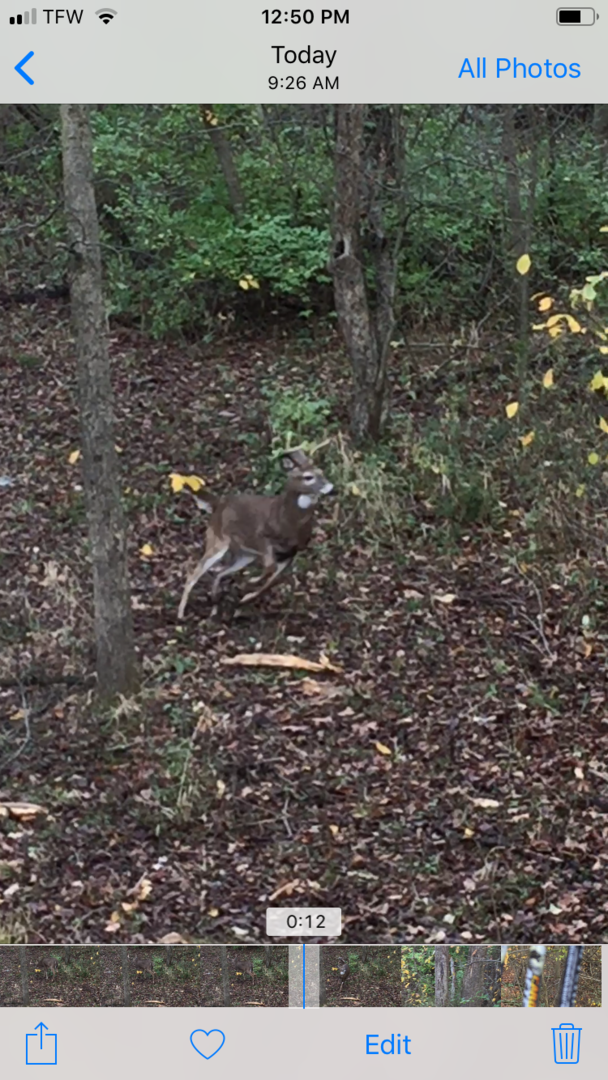 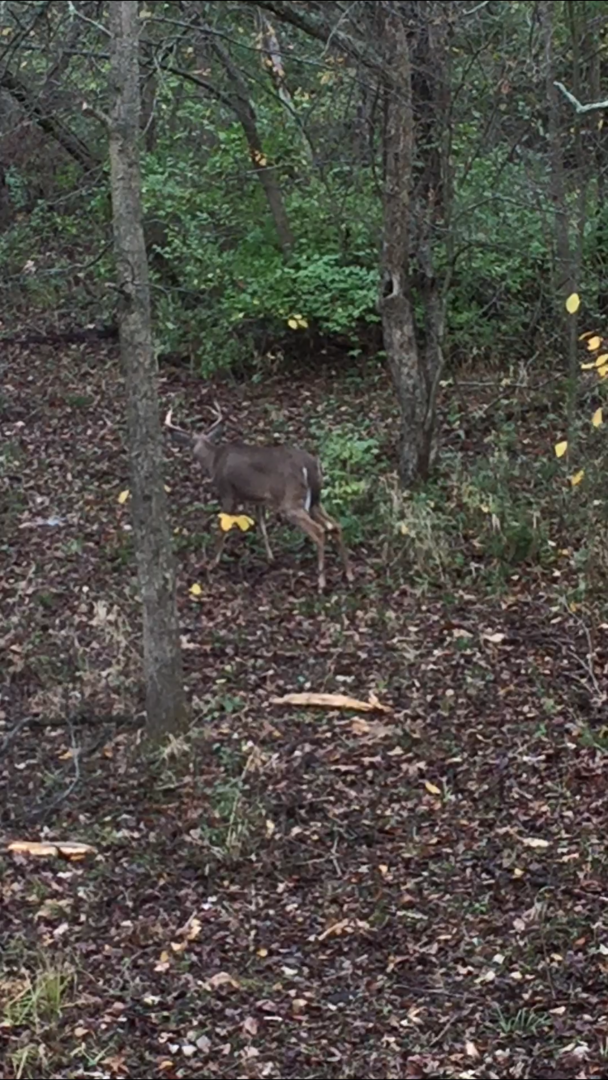 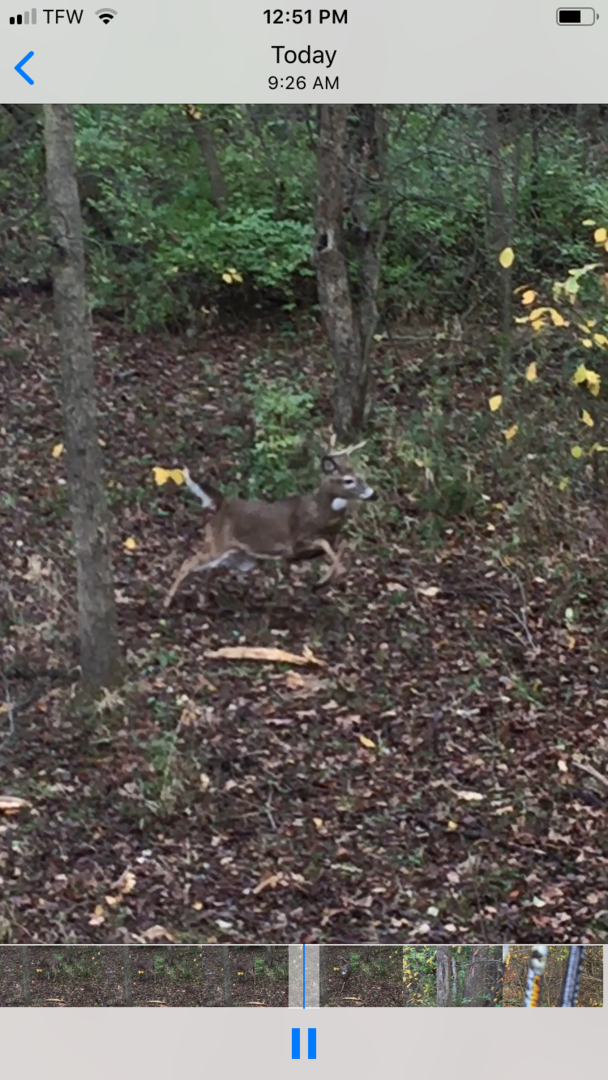 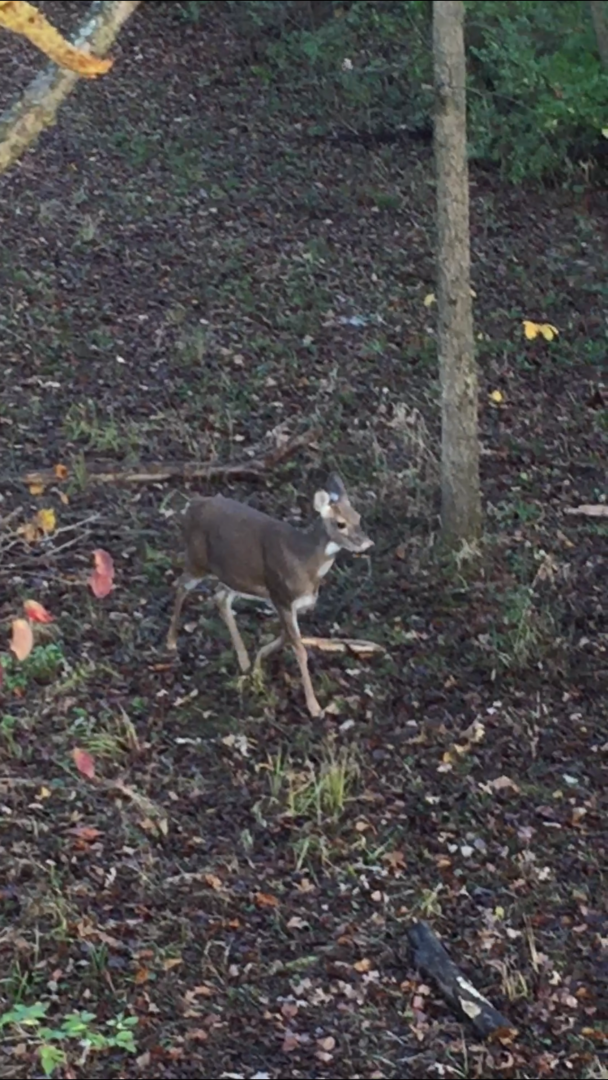 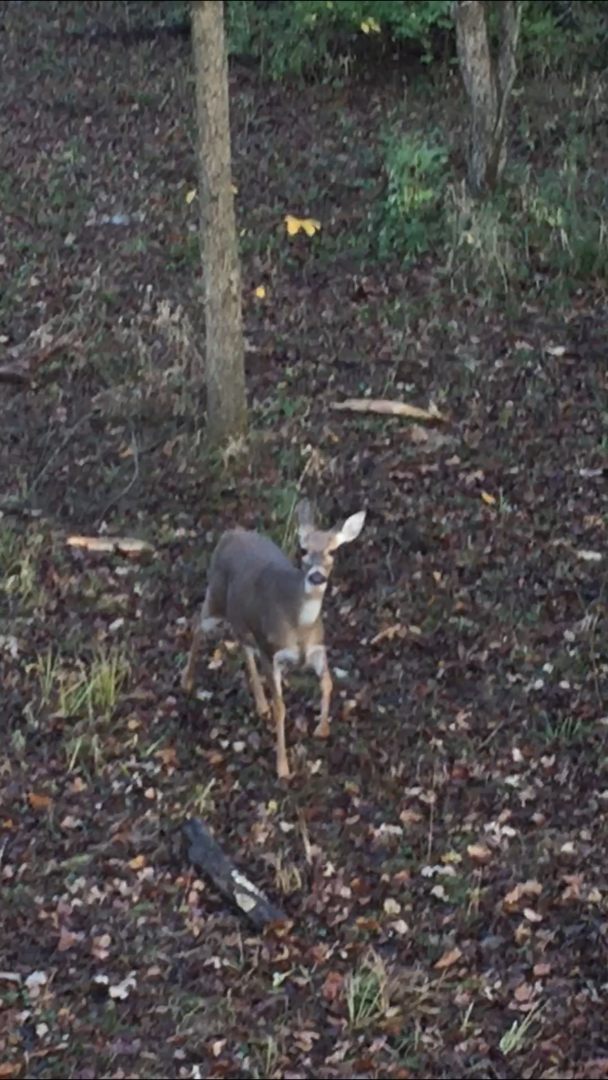 Nice pics Brock.... Sounds like you had a great day... And as a wise man once said: All the fun and no mess.....
Likes: finelyshedded, triple_duece, brock ratcliff and 1 other person

Sounds like you guys are on them buddy. Only a matter of time.
Likes: finelyshedded and brock ratcliff

Made my first sit of the year in the fence up in Fayette. It didn’t disappoint. First light found a doe feeding at the landowners corn pile. An hour or so later I noticed a nice buck locked down with a doe in a patch of crp 350 yards north of me. I got real excited at the first glimpse of his rack. After looking at him through binoculars it appeared he had just one side. Bummer. I saw a couple more young bucks and a couple more does, buck harassing them.
I had texted Mason about the big half rack and that I didn’t know if my video of him would be worthwhile. He suggested I walk over and kill him but I wasn’t interested in shooting a half rack, regardless of how big that half was.
Bored of being in the stand, I figured I’d put the sneak on him to get better video. So I made my move. Circled around and snuck within 75 yards or so. Holy crap, he’s a much better deer than I’d originally thought! And he’s old. Ok maybe I will shoot him... I waited for him to bed down to make my final approach.... I was just retry sure I was within thirty yards or so but couldn’t pick out his antlers in the crp. I though about blowing a grunt call as I was getting tired of looking after 45 minutes or so. About then, two younger bucks had apparently caught wind of the doe and moved in. As I saw them coming I knew he would stand to walk them off. He did, but he was not where I thought he was. As quickly as I could I ranged him 60 yards. I draw, settle the pin and broke and good shot. The arrow was beautiful, but it fell short. Under him. Perfect. So much fun and excitement and no one got hurt! The three bucks bounded away. I assessed the situation and took my best guess as to where my arrow might be in the crp. I was certain I’d never find it but somehow I did and it was clean as new, I don’t think I cut a single hair off him but it was indeed pretty close. I was using my old rangefinder and it is accurate, but in the crp I was getting 60,65,63.... I held for 60 and it wasn’t enough. I’m happy as a clam it worked out that way, honestly. Fun, fun, fun... and I’ve still got my tag AND my arrow!
I’ll post pics from the video when I get around to getting a look at it. This deer is a stud! But I’m glad he’s still out there to chas.
Likes: Mike, Isaacorps, Boarhead and 11 others

A pic of his good side and one that shows a bit of the funky stuff he has on the other side. 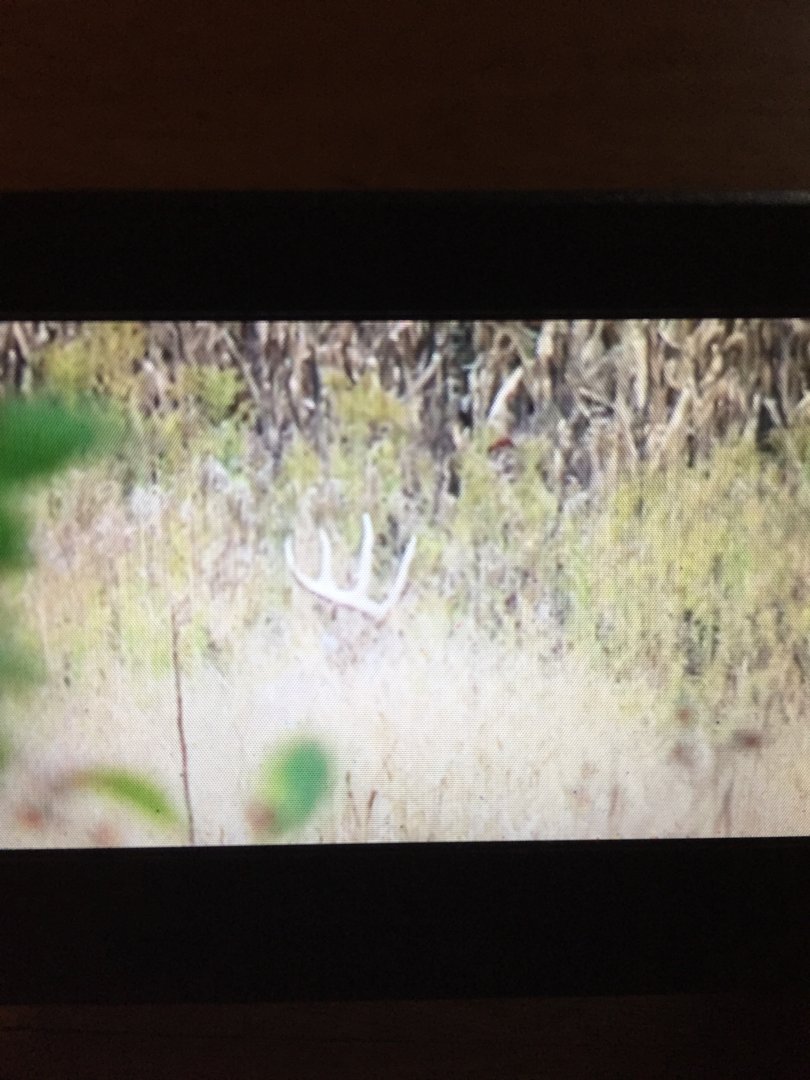 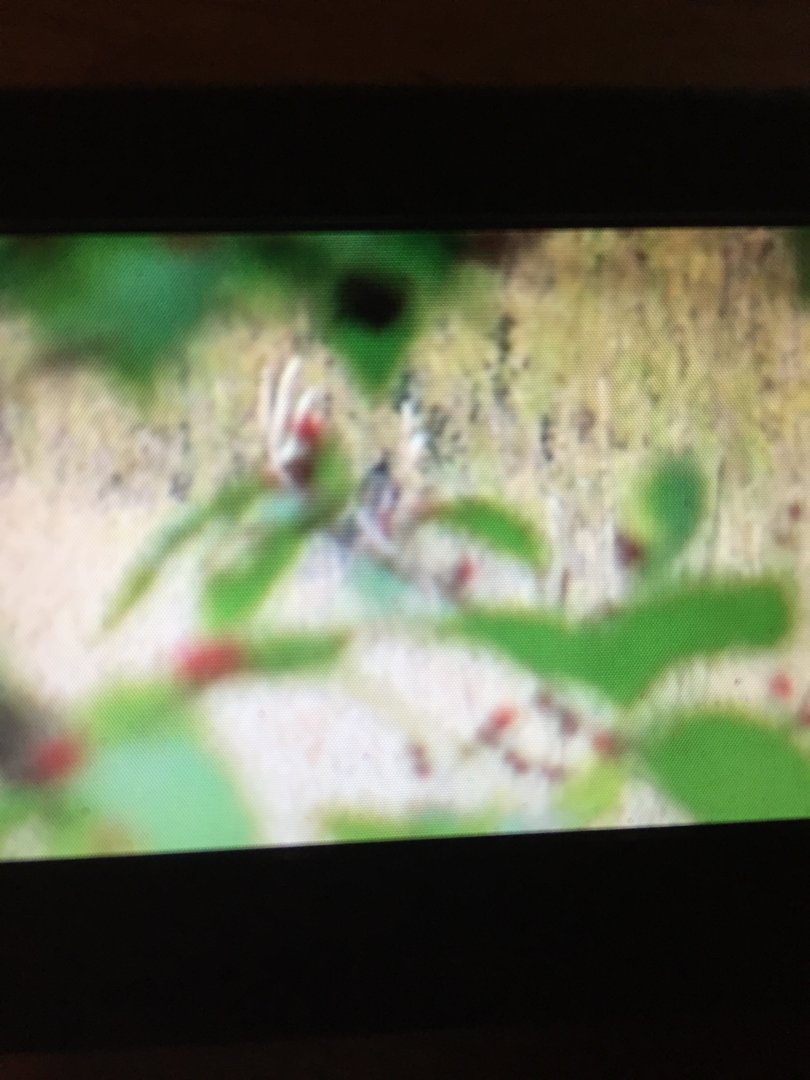 Sounds like an exciting hunt. AND the best is yet to come. Keep after it, Brock!
Likes: finelyshedded and brock ratcliff

Exciting hunt for sure. I expect it will only get better from here on out.
Likes: brock ratcliff

33 in a cut bean field is far easier... fun hunt tonight. 17 turkeys. Half a dozen deer. Two small bucks. Today was the first 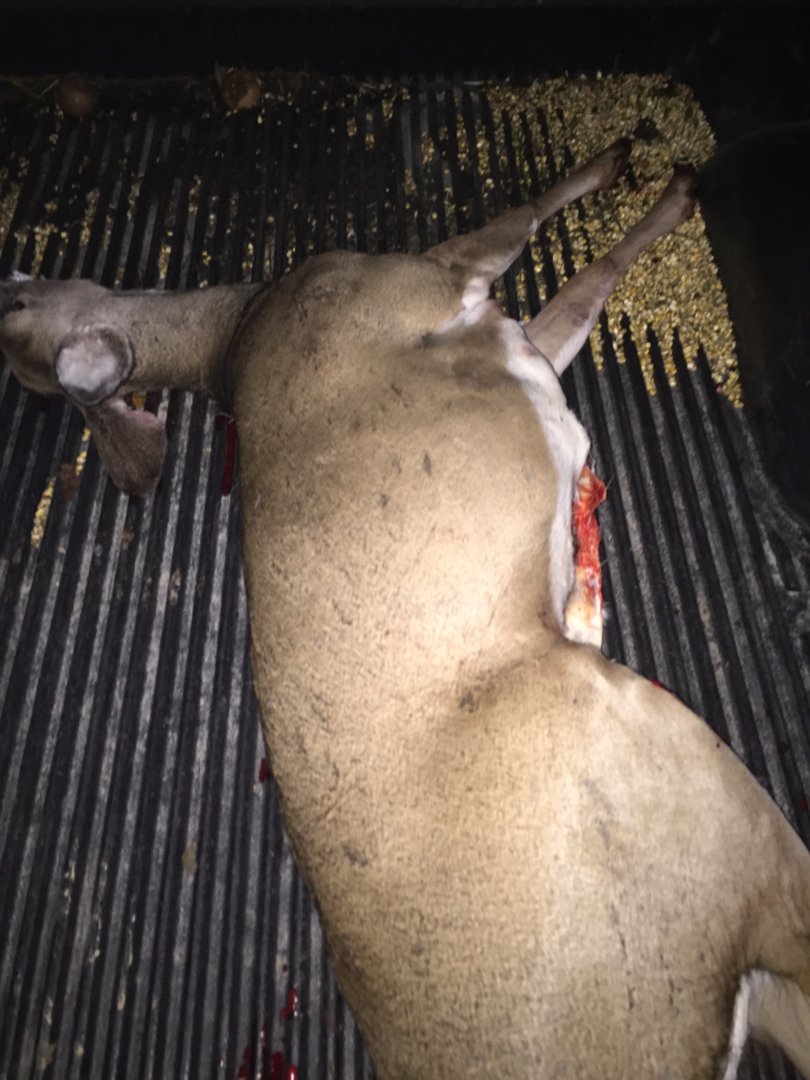 time I toted the old Mathews this fall.
Likes: Mike, OHIOOutdoors2, Fletch and 17 others

Awesome stalk Brock. You've always had a knack for sneaking up on mature deer. Great read too! 👍
Likes: finelyshedded and brock ratcliff