Jesse's thread about his food plot plans got me fired up, and since my planting is going to start in about a week I figured I'd share my plans as well.

Although I've been hunting this property for the past 7 or 8 years, last fall was the first time I've planted any food plots there. There were three plots total, one 3/4 acre and two 1/4 acre plots... all three planted with this blend: 100# canadian oats, 50# winter rye, 5# red clover, 3# ladino clover per acre. Even though I skipped soil tests and fertilizer (because cash was tight at the time), surprisingly these plots did really well. The deer enjoyed them, dining on the oats and rye throughout the fall and winter, and now they're hammering the clover.

Everything worked out great last year, so I should probably just stay the course and throw down the same blend this year right? Haha yea right! Now that I've got some devirginized soil and nitrogen-fixing clover established, it's time to mix it up. There is very little food near this property in terms of agricultural crops, so by planting an assortment of forages it should make the property more appealing to the deer.

This year I'm going to be adding Brassicas to the plots. In conjuction with more cereal grains and clover, these brassicas should add a significant amount forage to the property. Originally I had planned on buying all generic seed from the local co-op, but I found some deals on Evolved Harvest seed that I just couldn't pass up. Here's what I'm working with...

Now here's what I'm thinking... This amount of seed should be enough to plant about 1.5 to 2 acres of ground. My plan is to plant the entire bag of EH Rack Radishes in its own 1/4 acre plot. Then I'm going to mix the EH Trophy Forage, EH ProGraze, and PTTs which would give me seed blend consisting of 3.2# Rape, 5# Turnips, 2.7# Clover, and 0.3# Chickory. This should be about perfect for 1 to 1.5 acres worth. Now granted, the Brassicas are probably going to just shade out the clover and chickory, but whatever, they're in the bag so fugg it.

The property I hunt is around 100 acres or so, but I pretty much stay confined to about 80 of those acres. 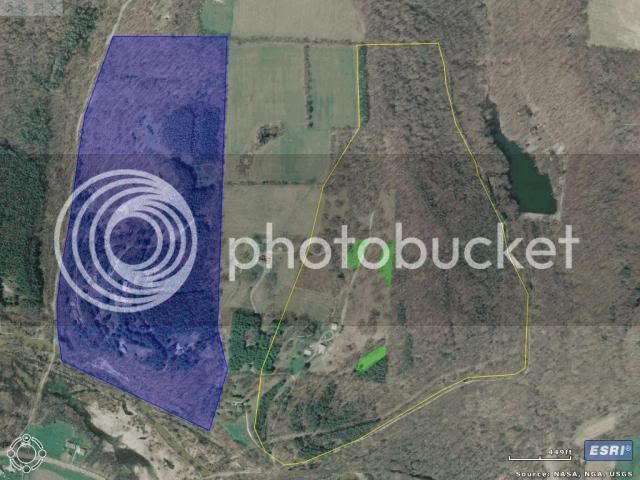 Here is an aerial view... yellow outline is 86 acres, green are the existing food plots, and blue is a 70 acre no-hunting property that basically acts as a sanctuary... this is where the bigguns spend most of their time. The pie-shaped piece in the middle is also ground I'm allowed to hunt, but it's not owned by my stepdad and I've gotten the feeling the last couple years that I'm stepping on the guy's toes. I've killed 7 deer off of that pie-shaped section, but as of last year I'm trying to stay off it as much as possible... Hence the reason for the food plotting.

Another view, tipped at an angle to show the contour of the land: 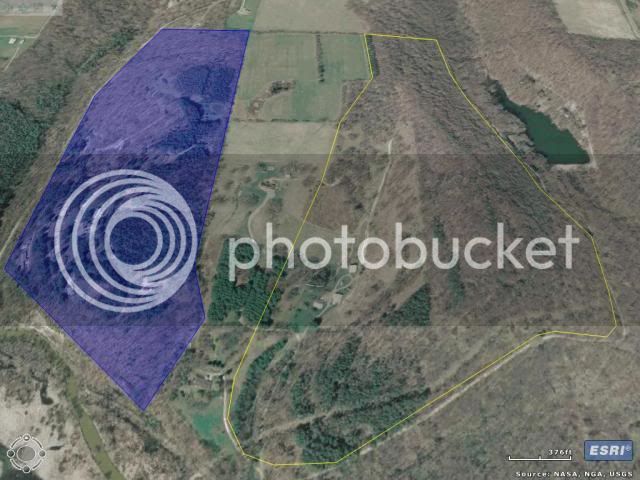 A close-up of the two north plots: 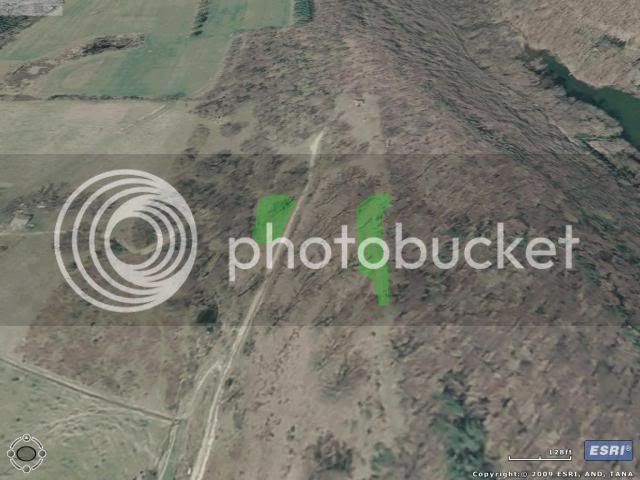 The long, narrow plot to the east has been the most productive and is the biggest of the three plots. It's got a great establishment of clover going right now, so my plan is to till only half of it right now for the brassicas... maybe even expand it a bit if I have the room... and leave the clover for another couple months. Come September, I'll till the other half and replant the cereal grain/clover blend as I did last fall. The smaller plot downslope to the west of this one has still got me scratching my head as to what to do with it.

Here are a couple views of the south plot:
Looking north... 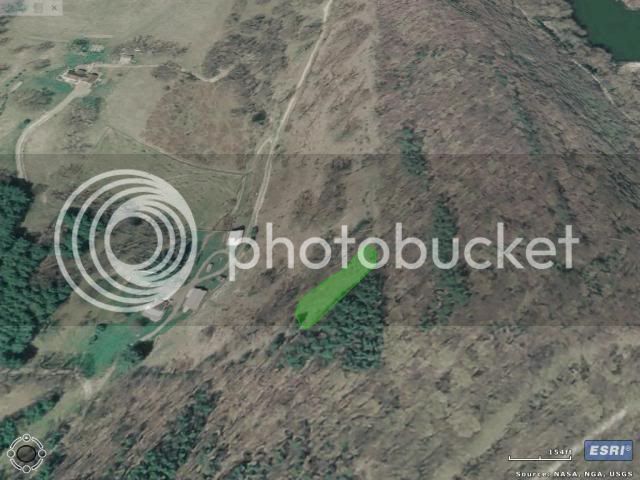 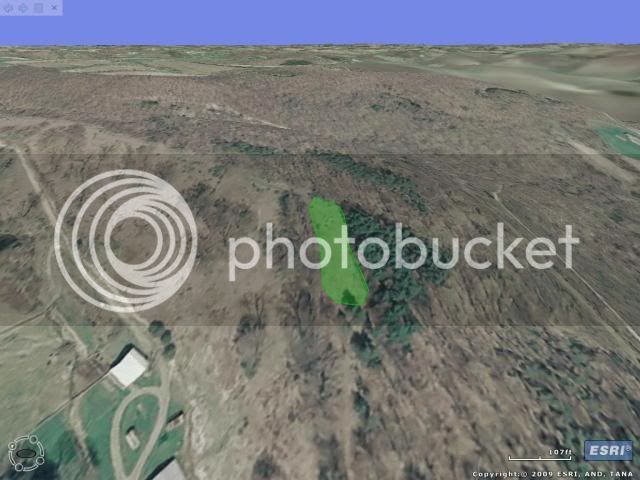 This is a pretty good plot. Even though it's fairly close to the house, this plot is deceivingly secluded. A thicket on the west side and the pine stand on the east side really box this one in. I've got a stand that sits 30' up in a pine, looking right over an entrance trail to this plot. I'm going to split this one in half also... Leave half for cereal grains and plant the other half to either the Rack Radishes or the Turnips.

Since I changed my hunting strategies at this property last fall, I'm still trying to figure out the deer's tendencies. I've always seen deer travel the east/west fencerow, going to and from the sanctuary, and to feed in the hayfield... and I've always just assumed they were bedded down in the gully just along the west side of my plots. Well earlier today a lightbulb went off in my head while looking at these aerial photos. I don't think they're bedding in the gully now... I think they're coming from the hillside well to the east of my plots! There is an inside corner there next to an old barn, and it's perfectly in line with that east/west fencerow. Due to this potential revelation, I'm going to try to till up a new plot either right on this inside corner, or just inside it a bit.

Here's a view of the inside corner with the potential new plot(s) in orange: 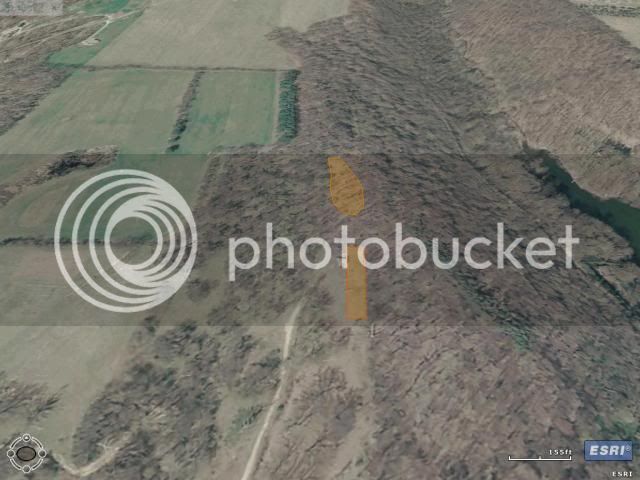 Now a view of the same spot, but looking west toward the sanctuary: 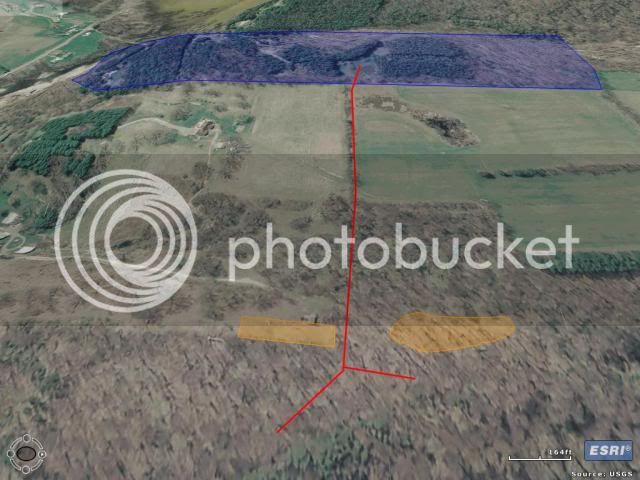 Look how the fencerow, the inside corner of the woods, and the ridgetop funnel behind the barn all line up perfectly. It's just a hunch so I'll have to set the cameras up to confirm it, but right now I'm sitting here thinking, "How did I not see this before?!?!?" If my hunch is correct, a food plot right near this corner could be absolutely dynomite. Only time will tell.

Thanks for taking the time to read through this. I know it's pretty long-winded. As of right now I'm shooting for the 24th of this month to put my Brassicas in the ground. I'll try to take as many pictures as possible and share the progress with you guys. I'm really looking forward to turning some ground over and stirring up the dust!

Looking at the first picture while reading your thread I had that inside corner by the fence row as my first choice of stand location. As I read on through the post and saw the other maps I could see exactly what you are talking about and I think you are spot on. That has got to be an old natural inside corner by that barn. I am very interested in seeing what you come up with.

Just look at the red square that looks like an old natural pasture that got divided by property lines at one point in time.

I think you're probably right, Hoyt. I'm glad you were thinking the same as I about that spot. It just blows my mind that I've never thought to hang a stand there... Usually I'm all over stuff like that. Before last season, I always had a stand in the middle of that fencerow, overlooking the hayfield. I killed 5 deer from that stand so I knew it was a good spot but I never really had the thought to backtrack where they were coming from. It's pretty strange, really... When you hunt a property the same way for a number of years then all of a sudden you're forced to stay away from a certain area, it's like starting all over with learning the patterns.

Good news... I planted some test seeds in my garage a few days ago, to see if the "expired" seed would have any problems germinating. So far I have a 90-100% germination rate, and the little brassicas are sprouting up nicely. Moral of the story, don't rule out expired seed if you can find a good deal. I'm gonna be a busy mofo next weekend!