My son, Dane just turned 8 in November...he wanted to go deer hunting this year for the first time so I got him an apprentice license and youth deer permit. I got him set up with a single shot H&R 20 gauge, scope, and shooting sticks to steady the gun. After practicing a few times we were dialed in. We went out during the youth season. The first morning we had a 130" 8 pointer standing broadside at 35 yards for almost a minute....he wouldn't shoot because he was afraid the gun was going to hurt him! Well, the buck didn't stick around long enough for me to talk him into shooting it. The rest of the weekend was uneventful, we saw some deer, but nothing in range ( 50 yards or less is what I wanted him to shoot). I took him out during shotgun season a couple times and nothing again, so this bonus weekend was our last chance.

With the weather being as cold as it was last weekend I opted to not hunt the mornings and just hunt the afternoon and evenings......No chances on Saturday, so we went out about 2:00 on Sunday afternoon and had 2 nice does in at 80-90 yards, but I wouldn't let him shoot, I felt they were a little too far. Well, as luck would have it a group of 15 deer came out of the woods and to within range of our brush pile blind with about 10 minutes of legal shooting time. I cocked the gun for him and told him to take his time and he made an awesome shot at this doe at about 60 yards, double lunged her, she ran about 75 yards and piled up on the run!!

He was about as excited as I have ever seen him when she fell over and I was excited too, as you can imagine. I think he is hooked on hunting now, he has been asking if we can go again soon.

I am going to get this doe mounted for him, actually I'm heading for the taxidermist tonight! 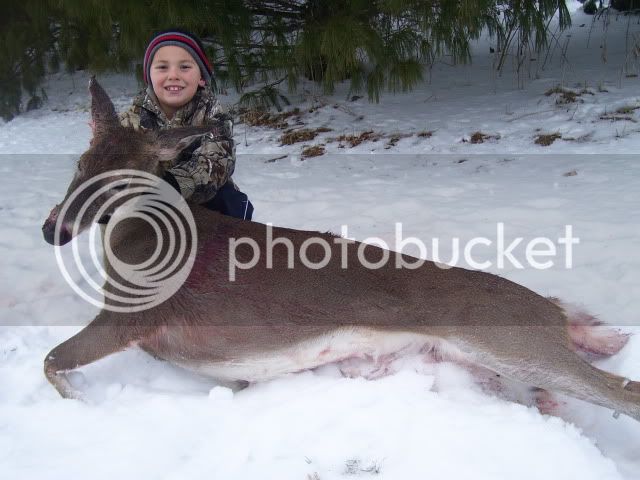 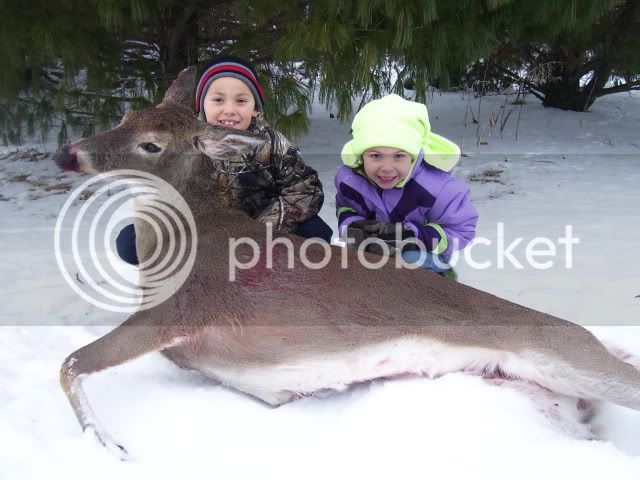 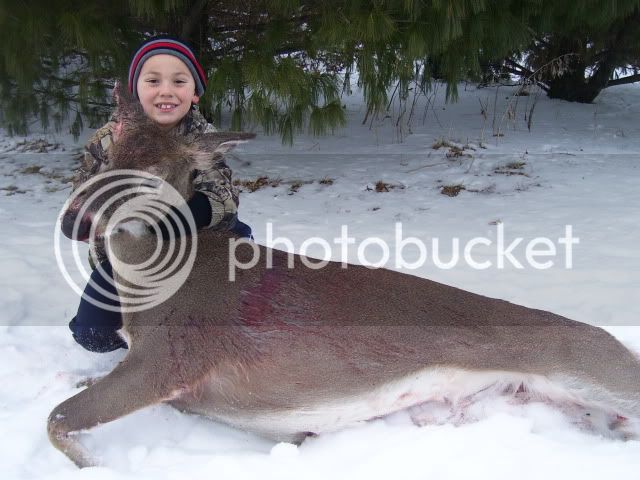 Great job. Looks like you have your new partner next year. Twice the fun now.
:smiley_clap:

AWESOME!!!! Way to go Gern. Bringin' him up right. That is so dang cool.
U

congrats , start em young and youll have a hunting partner for life

Congrats to both of you!! That is great!!!

Congratulations to both of you!

congraqts gern....bet you couldn't wipe that smile off his face all night...

That's great Gern! Congrats to you and Dane.

Awesome job Chad! She'll make a beautiful mount. Congrats TOO your son and yourself buddy!

Way to go the young feller!

Congrats to your boy again...,those are some great pictures.

That's awesome Gern. He is a better shot than I am.

Awesome story and congrats to your son. He is hooked now Dad. :smiley_clap:

That is pretty awesome, Gern. I can't wait for the day that I get to have an experience like that TOO!
R

Thats just awesome. One day I would like to take my kids hunting too but first I gotta make some though lmao

Congrats to Dane. That is a huge doe he got.