When I first started looking into trad archery, I'll never forget the first bowyer site I found myself on...Stalker Stickbows. I remember thinking how amazing the guy's work was, but it was way out of my price range. I'd never spend that much on a bow. Funny how thing's change. I have since become completely obsessed with shooting a traditional bow, and still shoot my cheap $130 starter recurve every day. I had every intention of upgrading to a nice bow after Year 1 if it was something I felt strongly enough about. Throughout the year, I gradually sold a lot of old gear that I no longer used, as well as some custom turkey slate calls to a family friend. I kept tally of how much I was sticking away, and quickly realized that I had accumulated enough to cover nearly 2/3 of the cost of a bow like a custom Stalker. In December, I decided on a bow and wood combination, and placed the order with Stalker. The wait began.

I touched base with South Cox, the bowyer, when I placed the order. He indicated a roughly 3ish month wait on a Wolverine like I ordered. The clock was ticking in my head and I had a general idea of when to expect a shipping notice. In the meantime, I picked up an arrow test pack of Black Eagle Vintage arrows, additional string silencers, and weighted brass inserts so I was ready to get running when the bow arrived. I admittedly did the tuning process wrong on the last bow and was shooting an arrow that flew well, but was really too light for my poundage. I've been watching my email like a hawk lately, but nothing. Then, on Thursday, Mr. Postman brought this box to my door. 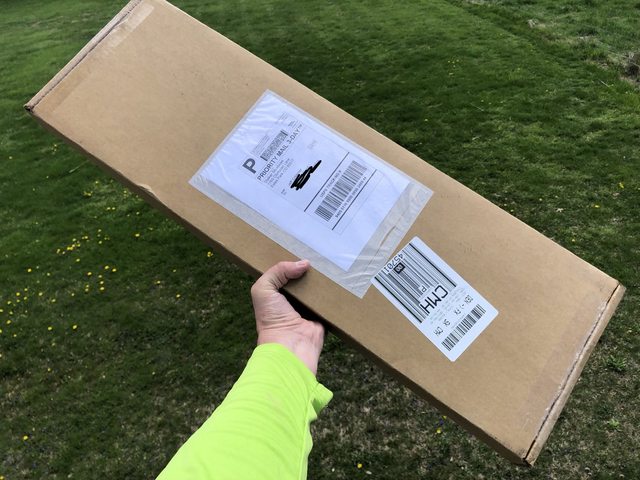 That was an "oh shit" moment when I saw the box, because I wasn't expecting it. I never got a shipping notice so I had no idea it was coming. It was Christmas in April for me. When I started unboxing, I was in awe of the craftsmanship and beauty of this bow. 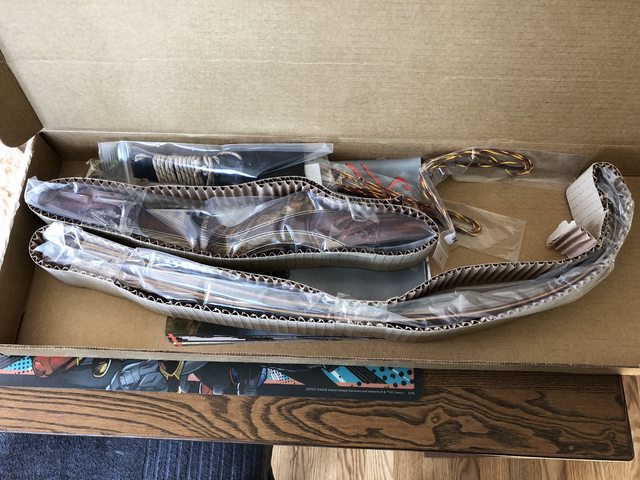 The bow I ordered was a 60" Wolverine FXT, with cocobolo and bocote in the riser (my two favorite woods), cocobolo veneers on the limbs, 45lbs at 28". It came out at 46lbs at 28". I shot 50lbs last year, and although I could handle 50lbs without any issue, I wanted to shoot a slightly lighter weight to allow me to hold at full draw a little longer, and 46lbs is plenty for a whitetail. 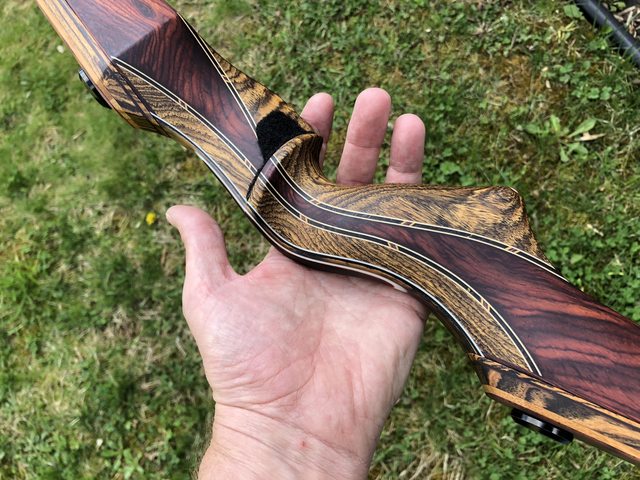 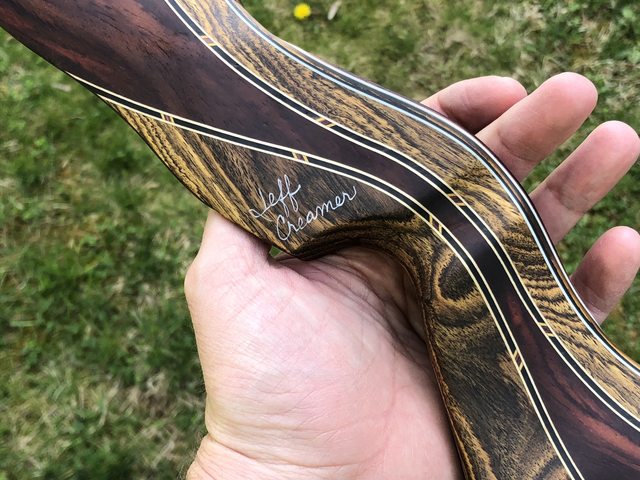 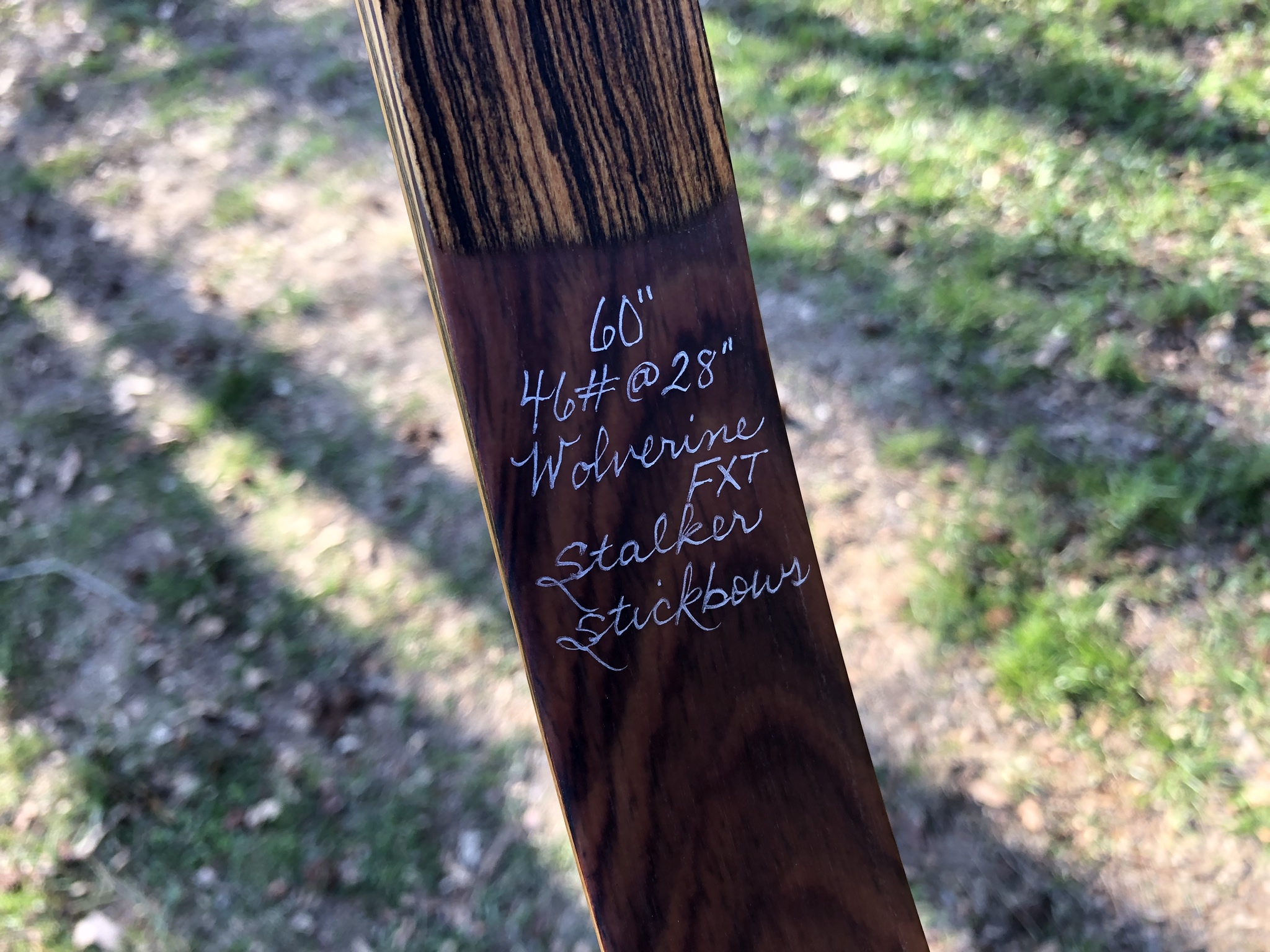 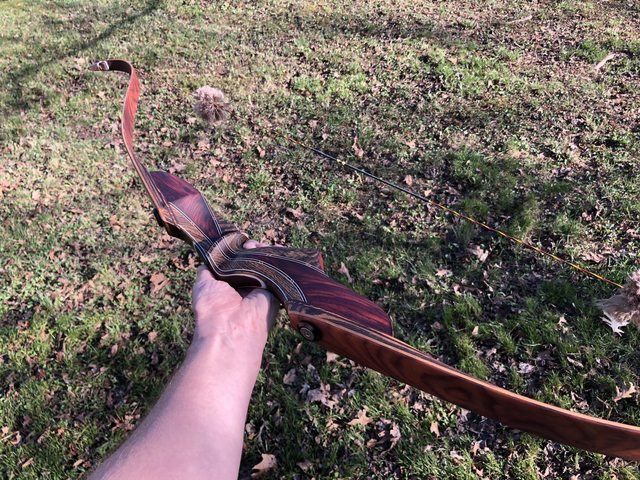 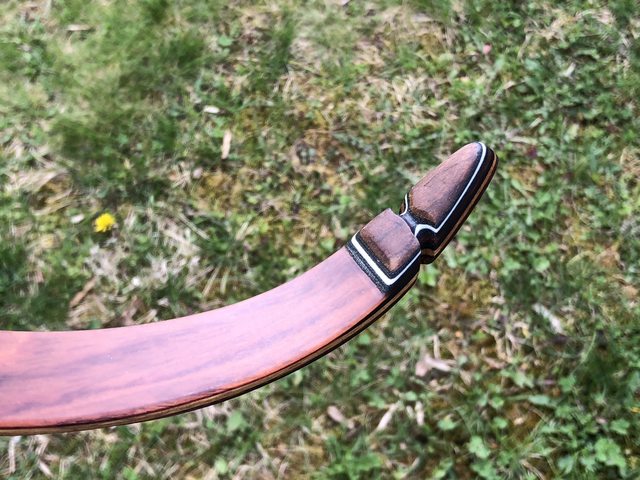 I got busy tuning yesterday, playing with both a 400 spine Vintage and a 350. I wanted to use a brass insert this go-around, so I used a 50 grain brass insert. Playing with arrow length and point weight, bare shafting slow-motion videos with my phone over the shoulder, I settled on the 350 spine at 30.5" long with a 145 grain tip. All told, with arrow wrap, nock, and Trad Vanes installed, my total arrow weight is 508 grains. I tried shortening the 400's and lightening the point weight, but I still was getting a weak spine result, and the 350's were tracking pretty darn straight as bare shafts. I had some nock-down, but played with my nock height and took that out. 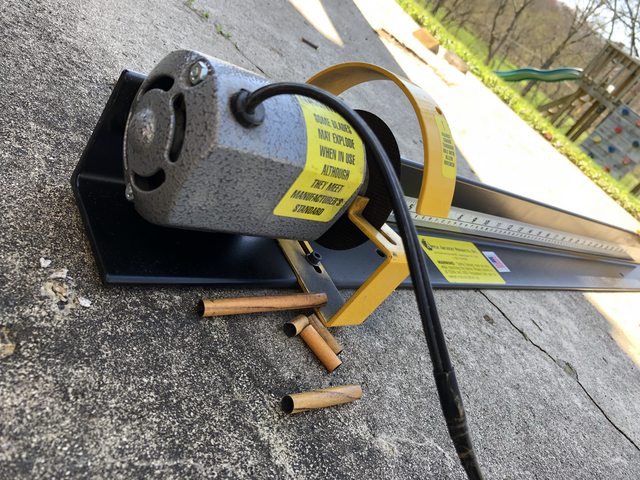 I took my test shaft inside, added a wrap and got it fletched up, and went back later to sling a completed arrow. The new girl is throwing some darts already. The bow feels great in my hand and I LOVE the grip style. It's a little higher than the Sage, which was what I wanted. So far, there's absolutely nothing I don't like about the new bow. I've got a dozen 350 Vintage shafts coming Monday so I can get to work building more arrows. For now, I'll shoot the one I have. When it comes to fletching, I still like feathers more but I see the pros in the Trad Vanes. Mainly, I just don't like gluing them up. Feathers and fletching tape is just so stinking easy and fast. I'll give the vanes a shot, though. I think I'll fletch up a half dozen with them and maybe do feathers on the other half. 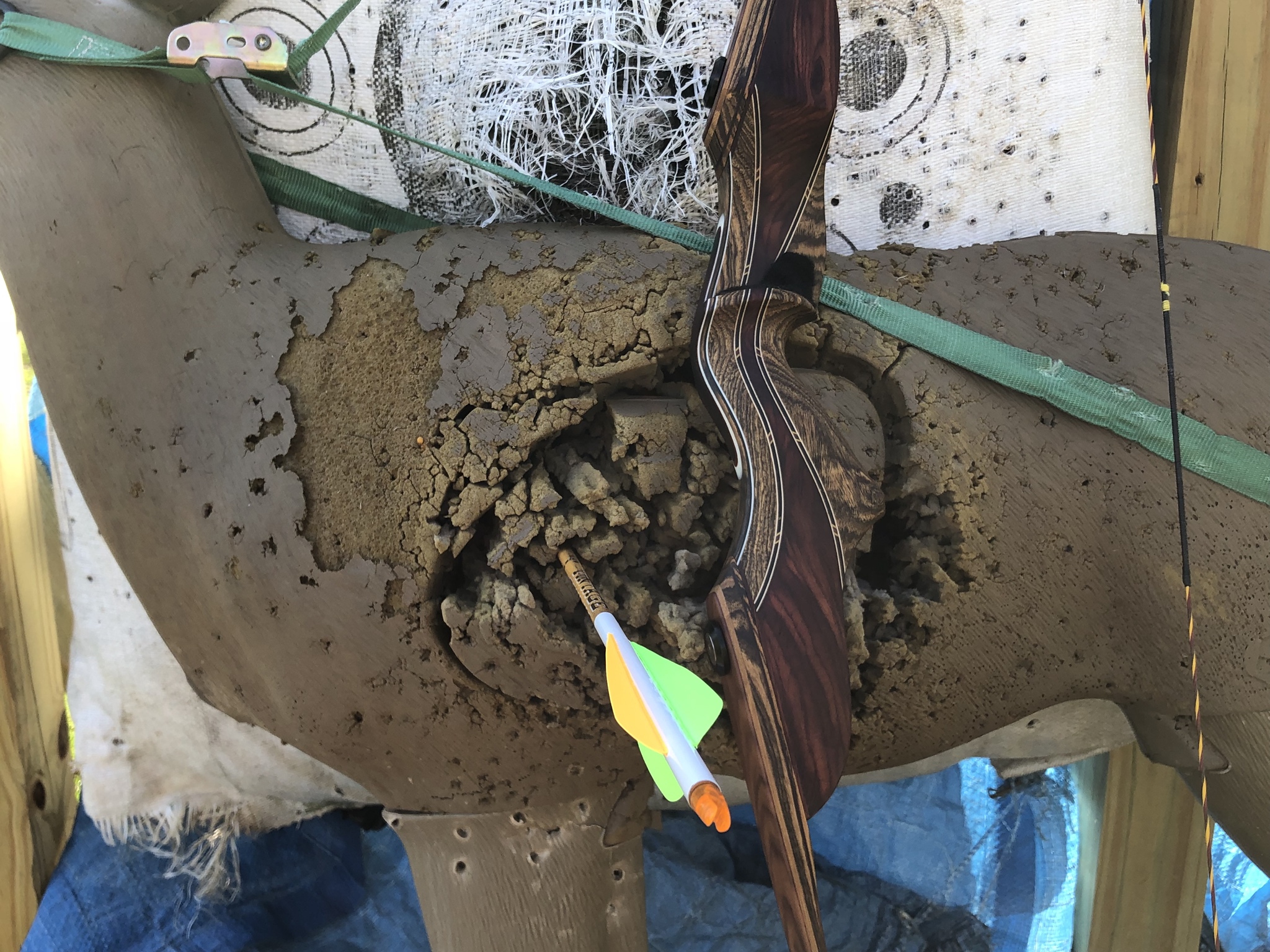 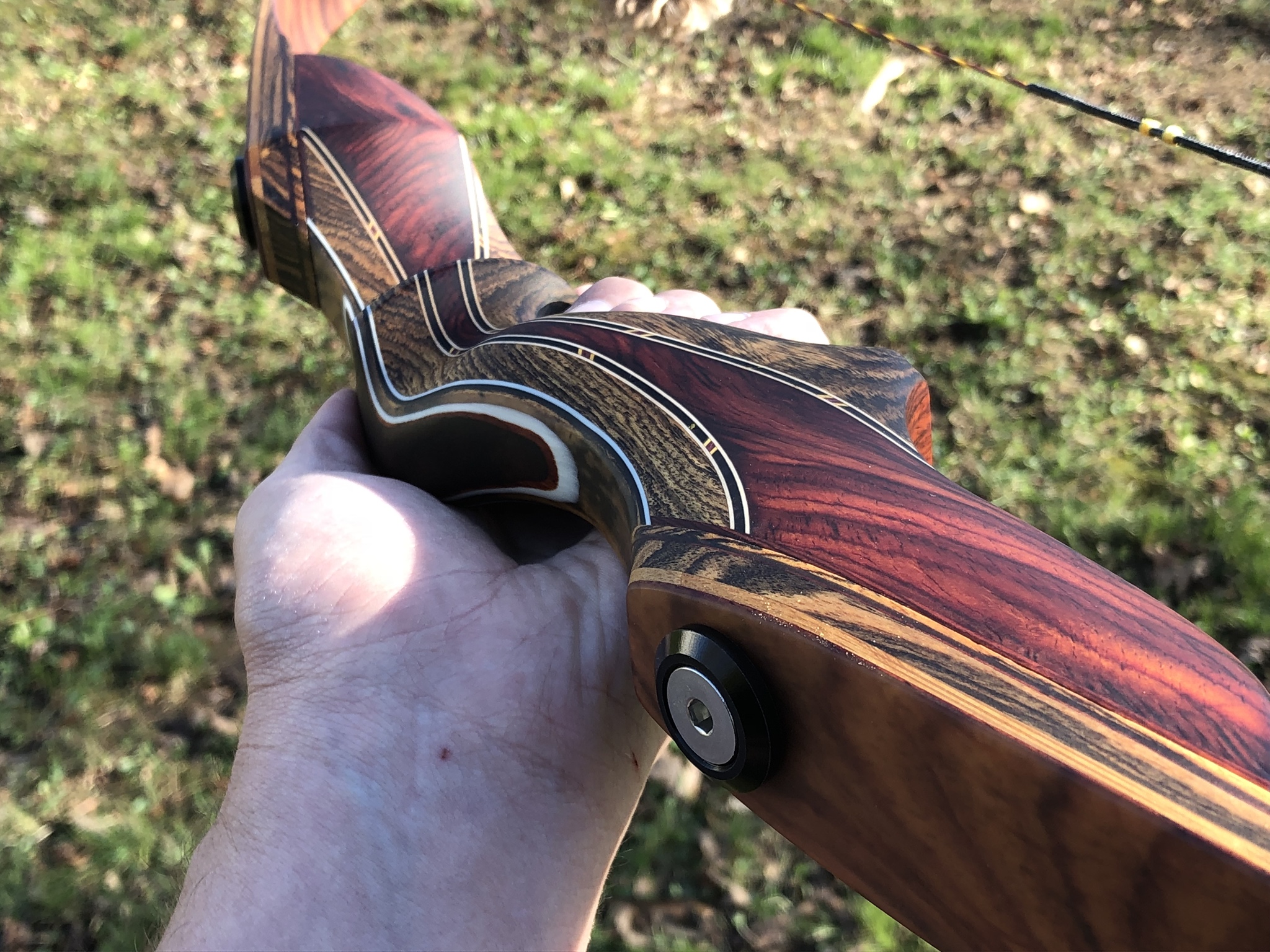 That this is beautiful 😍
Likes: Creamer

It's a beaut, Clark! I'm happy for you. Enjoy it.
Likes: Creamer

there just isn't anything like your first custom bow. very sexy.
Likes: bowhunter1023, finelyshedded and Creamer

Simply awesome man. Those Stalkers are some of the nicest custom bows out there. Congrats!
Likes: bowhunter1023, finelyshedded and Creamer

Congratulations
That is a real piece of craftsmanship and art

We are getting along quite nicely at the moment. 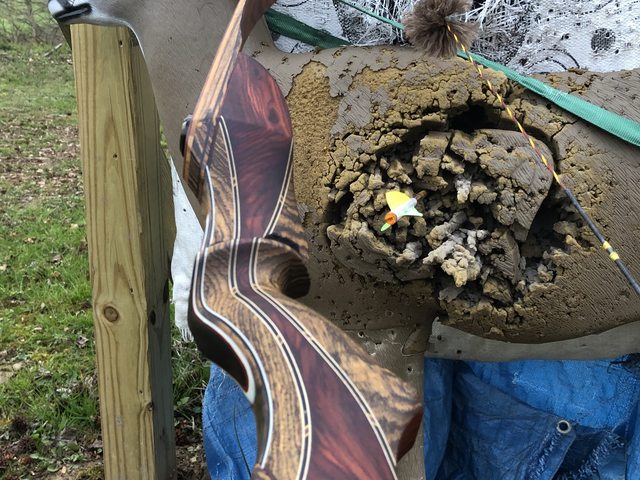 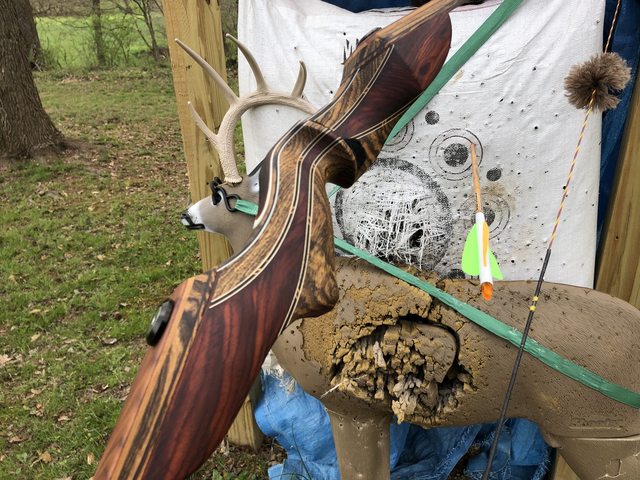 I made one more minor adjustment on my nock height, lowering it just a touch. Arrows (well, arrow, since I only have one at the moment) seem to be flying really well. My fresh dozen shafts come later today. Right now I think the plan is to do a half dozen in Trad Vanes and I'll leave the other half for feathers once I pick up some more chartreuse feathers.
Likes: bowhunter1023, twireman and MoonLab

Your concentration level must be over the top. I would’ve shot that damn strap a long time ago.
C

giles said:
Your concentration level must be over the top. I would’ve shot that damn strap a long time ago.
Click to expand...
It's been hit several times. Funny thing is, from long distance when I have hit it, the arrows literally bounce off. Close range they penetrate it. The first time it happened, it was a 40 yard shot from the house and I saw the arrow bounce back and I had no idea what happened. Then I saw the tiny hole in the strap where it barely poked a hole in it but the entire field tip didn't make it through. Weird shit.
Likes: giles

It’s the weave in the build. Much like Kevlar.

WOW that bow is beautiful!!
C

Nothing too difficult here, just wanted to try slow motion with a water balloon. 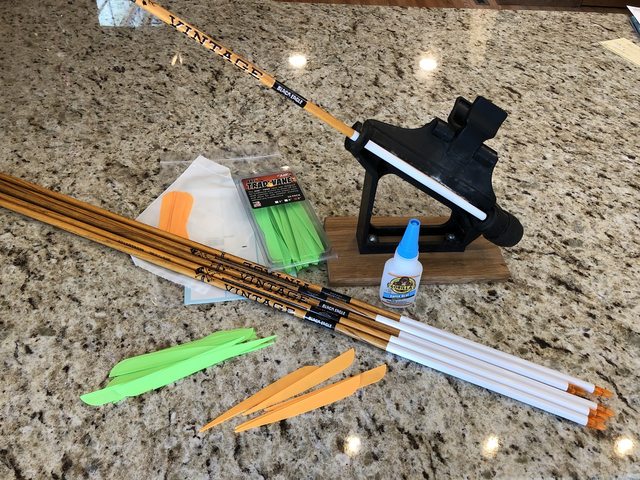 I decided I'd do half the dozen in Trad Vanes and the other half in feathers. I'll be ordering the feathers today. With tape and feathers, it's ridiculous how much faster arrows can be done. 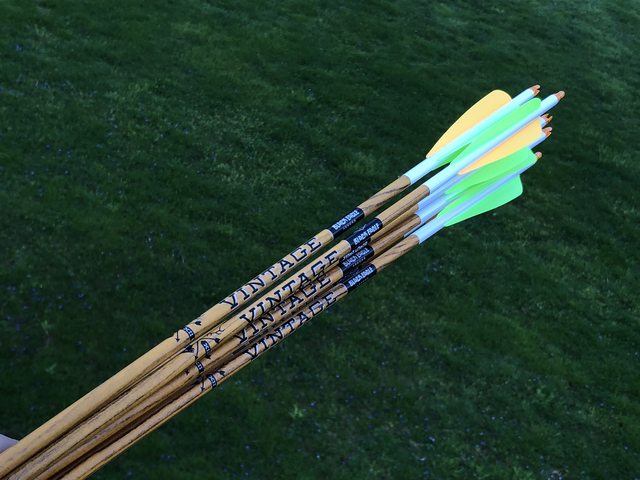