Jackalope said:
Hey butthole. Where's my thanks for an honest and fair assessment of the defense?

Hey butthole- go read the post again. Lol. Been there the entire time.

bowhunter1023 said:
We're young and that wasn't the easiest opening game we could have had. Still, the defense is once again alarming. It's like once we built a 40+ PPG offense, we let the defense go. Worst ever OSU defense last year based on PPG and they're already worst than that after Game 1. I sure hope that's due to nerves and young LBs and CBs, but there's an element of coaching in there too. I went to bed at halftime, so I'll watch the later to get a better feel, just basing my comments off the first half and the box score.
Click to expand...

I stayed up till 11:30 for this and I agree with you and Ryan both BIGTIME.
We’ve not recruited very well in the LB position for sure but got tons of speed and talent in the DB and Safety positions BUT they’re being coached wrong, IMHO. Ryan is 1000% correct that KC isn’t anything more than a great recruiter for the SW part of the state or anywhere else for that matter. He is the ex-head coach for a powerhouse Colrain team here outside Cincy but dude can’t be teaching these super talented DB to faceguard and rape opponent receivers! That first Minnesota TD Burke(#29) coulda picked that TD if he’d just turn his head around, IMO. Ever since the NCAA allowed faceguarding it seems Coombs has embraced this technique and PREACHED it to his talented players! THIS will not help them going into the next level and will only hurt their draft status…..ask Shawn Wade how that went this spring! Dude had talent and skills but KC killed his progression, IMO.
I’m sooooooooo glad to see Tuff Boren and Pete Werner gone!!!’ Two slowest LBers I’ve ever seen at OSU in ALL MY LIFE!!!!! God Bless them for wanting to be Buckeyes but DAAAAAYUM! Hairston,Browning and especially Hilliard last few years were the only NFL talent we had at the LBer positions, again IMHO. Hilliard if he stays healthy can really help SF’s D! Really has a nose for the ball.
We finally have some talent and SPEED at LB position but they need coaching and help from the DE’s. Love the DT play but our DE’s need work. WATCH FOR JACK SAWYER #33 in the future! This kid is SPECIAL! Katzenmoyer, Chase Young or Boza bros. Type of talent. He’s a true freshman but he really shined in the Spring game and has tons of promise.
We have a loooong way to go to be a true top 4 team but plenty of talent and time to eventually get there if we make adjustments and coach them up.
Stroud put too much pressure on himself last night but I think he’ll be just fine. He just needs to take care of the ball and get the ball into his massive amounts of talent he has ALL around him and not make ill advised throws that could lead to TO’s. He also needs to show us how he can pick up some crucial yards with his feet and not tip toe out of bounds behind the LOS.
Season has just started, talent looks great and I’ve got high expectations for the program again this year. I gotta admit though, can’t wait till I see what this early enrollee QB from TX does, dude looks to be the real deal!

Pfffft. I didn't see any thank you.

Jackalope said:
Pfffft. I didn't see any thank you.

I acknowledged and offered credit. Plus you know I like redheads so Ryan got more love. 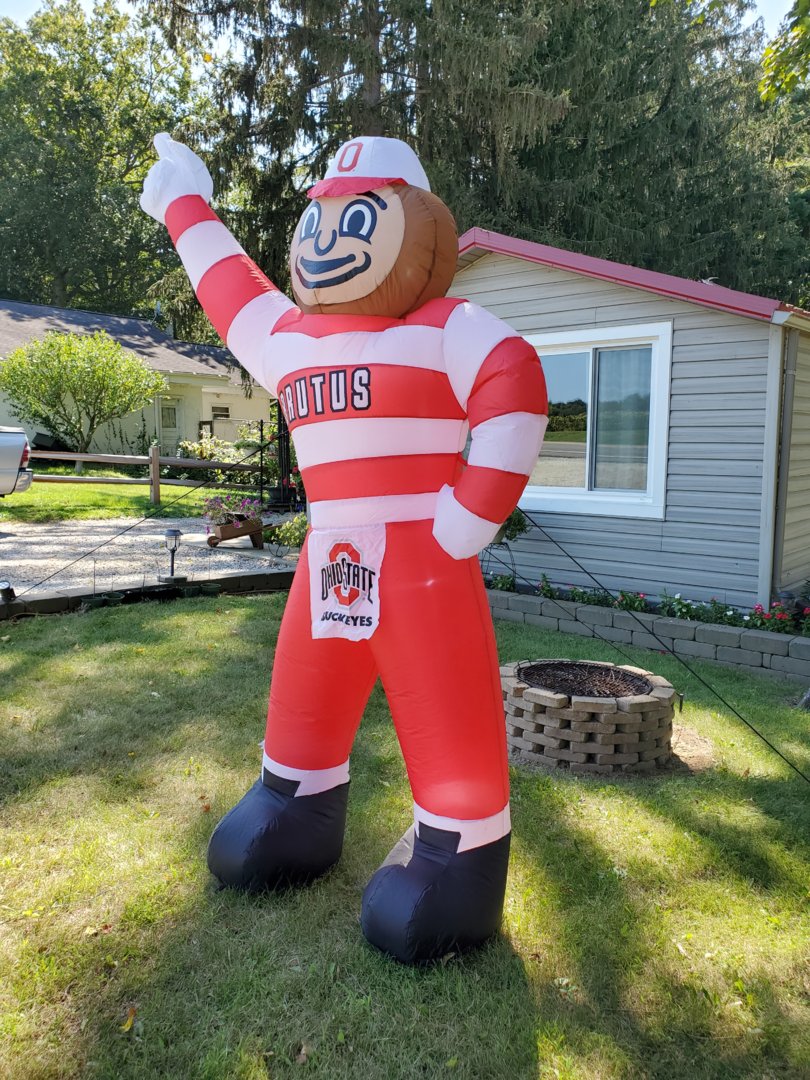 Time for a new defensive coordinator.
Reactions: MoonLab and tracker 6

Damn a lot of penalties on us and a lot of refs are sleeping on the bad calls. Good win, Oregon .
Reactions: Mike

Rare I agree with the hate, but all things considered, we were/are overrated. It's a rebuild year and today proved it. We're young. Ask me again in 2023 what I think of this team and I'll say it's our year.
Reactions: Mike, Tipmoose, tracker 6 and 1 other person

Glad I missed most of it. Sounded like we out up yards but not enough points. I don't know because I'm only reading and hearing about the poor defense. Guess I will see in a replay eventually. Who knows? Sometimes a loss like this is needed to make changes happen. Maybe a good thing in the long run?
R

The announcers were all but telling the audience how terrible a DC that Coombs is
Reactions: bowhunter1023

What he do, win a bet on the game or somethin

Bruh bruuuhhh.. 600+ yard game is enough to win any game. Great looking Stats. Didn't get that defense cleaned up though. 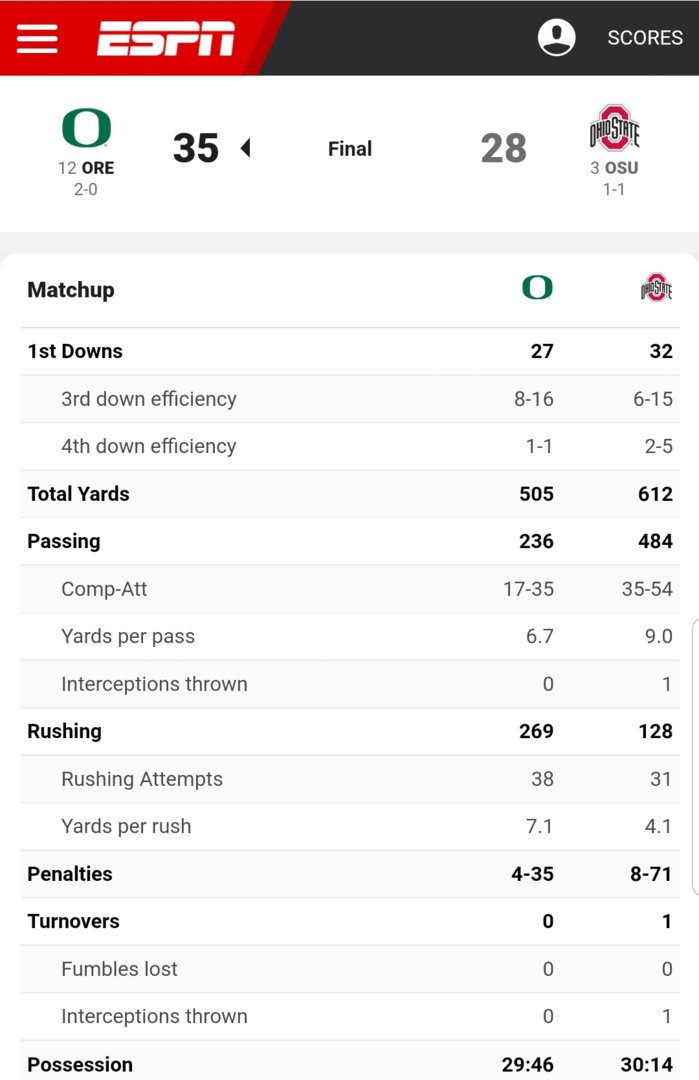 How do you have 600+ Yards of offense and still lose?

Clay Showalter said:
How do you have 600+ Yards of offense and still lose? 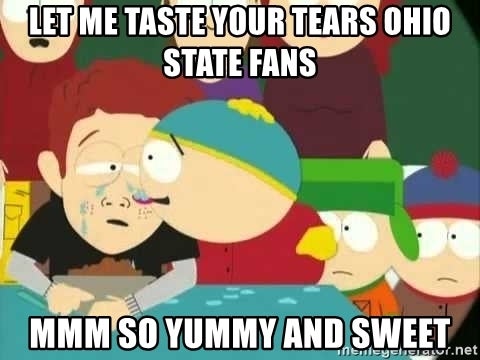 Reactions: giles, Mike, Wildlife and 3 others

Clay Showalter said:
How do you have 600+ Yards of offense and still lose?

4 turnovers. 1 int and 3 failures on 4th down.
Reactions: Mike and finelyshedded

Tipmoose said:
4 turnovers. 1 int and 3 failures on 4th down.
Click to expand...

…………..and a DC who doesn’t know how to change formations or make adjustments. He’s waaaaaasy out of his league and should have stayed coaching Colrain HS football here in Cincy. He’s just a good recruiter for this area but other than that just give him some pom poms and let him coach the cheerleaders. Lmao
Reactions: Jackalope, hickslawns, Dustinb80 and 1 other person
You must log in or register to reply here.
Share:
Facebook Twitter Reddit Pinterest Tumblr WhatsApp Email Share Link