Swing and a miss: I shot at a buck and missed him clean. The 3" solid copper Remington sabot slug did a number on this tree though

Been taking pictures, saw this and thought it was cool.... A little plant, no big deal?

If you look closely at the one leaf, there is a blade of grass growing up through a hole in the leaf. The plants are intertwined for the rest of their short lives

Awesome stuff, Dan. Glad to see you're down there having a ball!

Man this looks like you are having a great time. Keep the updates coming brother. Congrats on the deer harvested so far!!!
Likes: TinyTucky

So this morning I took deer number three out of the Kentucky Woods, a doe. A very very small Doe. I've been told that Ohio deer are larger and when you go to other states the deer are smaller but I didn't realize the difference. There are no egg fields around this property all they can do is browse and eat nuts. It felt weird dressing out such a small deer. But hey, tiny is tender!

I put a good shot on her with my 357 Max Handi rifle, she jogged about 25 yards wobbled and fell over. It was weird, she didn't jump and mule kick, she didn't run she just took off jogging and then fell over

So I did the regular field dressing job and hung her from a gambrel and skinned and quarter that way.
It let me get the heart that way. We've talked about it and other threads, if you're not harvesting and using the heart you are really missing out. 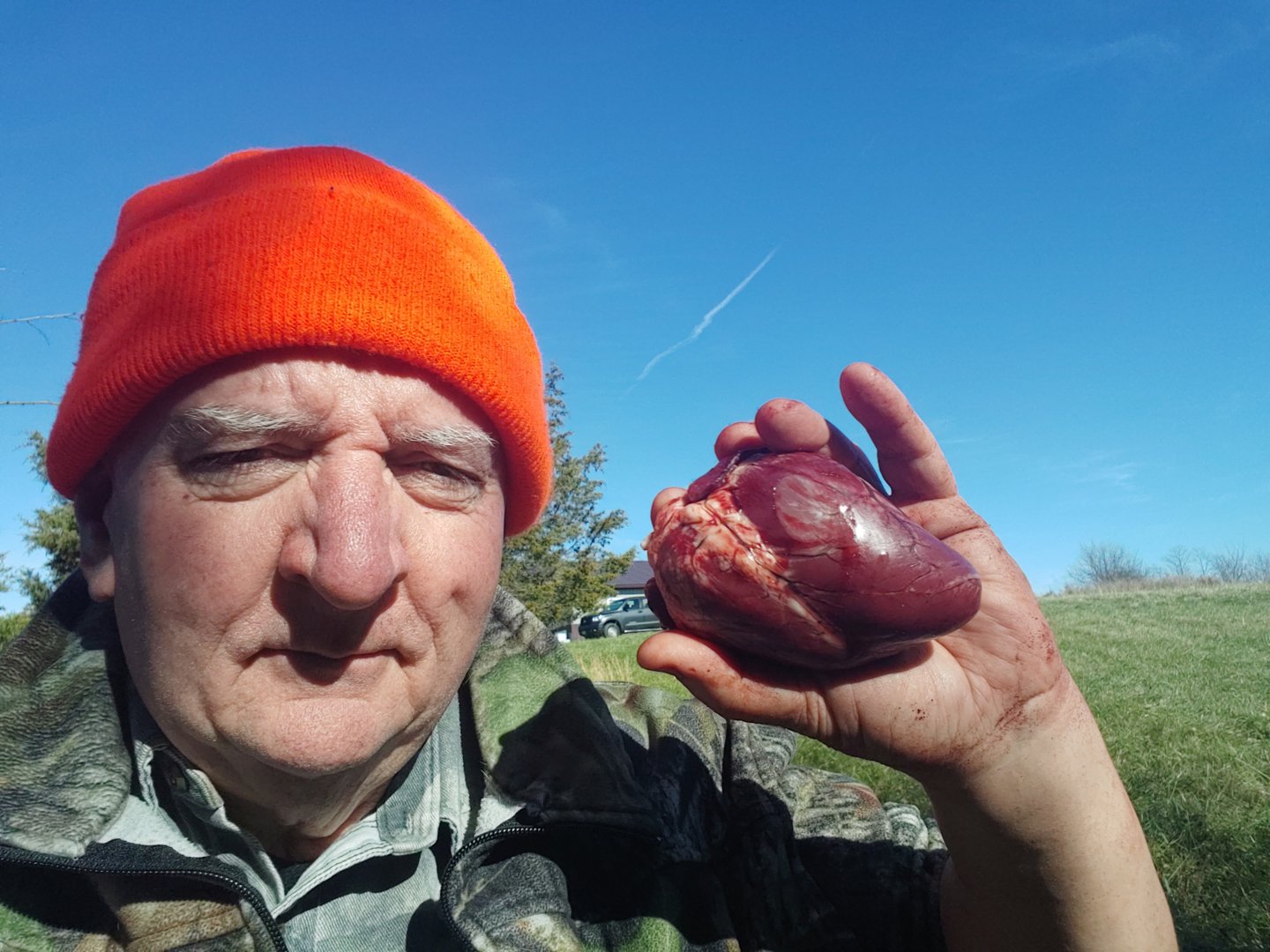 This is what happens if you accidentally cut the tendon on the rear leg as you're trying to skin your deer, that's some Looney Tunes looking shit ain't it?

I've been blessed to see some beautiful sunsets this week, God's paintbrush at work

The first doe I shot on Tuesday I was using my 12 gauge with a rifled barrel, and shooting Remington 3 inch copper solid sabot slugs. She was quartering too, and I hit her in the chest with a good shot. She took off like a freight train running down hill on the game Trail she was on and piled up 40 yards later. Huge holes entrance and exit, I can't believe she ran that far that fast. And of course, she runs straight down into this hollow where I can't take an ATV. Thankfully I had my game cart with me. I use that to get her up the hill to where I could get the ATV in and took it from there. I'll say it again, a game cart is a game changer.

Dan, you are living the dream this week in the land of Boone. Thanks for taking the time to share the details and pictures. I’m enjoying opening this thread every time you post.
Likes: Sgt Fury, CJD3, giles and 1 other person

This is what it looks like from my little brushed in hidey-hole. Well, s*** is not uploading now so I'll have to try this again tomorrow maybe if I have better reception. I'm going out again in the morning for the last time looking for Mr Big Buck, hope he shows up

Get that buck, good luck!

Good luck this morning. Sure hope to see a pic of a dead buck next. Either way it sounds like you have had a great hunt sir.

Nice week you’re having Dan, you deserve it.... Congratulations buddy....

What a week Dan! Well done brother. I'm super jealous of the experience and the full freezer!

Well Gentlemen, I'm here to report that at 8:42AM this morning -
Big Buck Down!
I've never put down a buck this big before - his neck was the first thing I saw....
And he walked in slowly, stood broadside and offered me the shot, didn't have to rush, just laid it on and squeezed....
knocked him over, BAMM! He lay there, legs twitching, and I thought "Excellent, that's a short tracking job..."

And to my surprise, the sumbich jumped up and started running down a gametrail (the same one the doe took earlier in the week), running on 3 legs and his left front leg just dangling. Big Buck back up!?!?!?! What the fuck? I heard him running, then it stopped, but I didn't hear a crash.....

So my plan for the day was to hunt until 10:30, be out of the woods by 11:00, then load the truck and be on the road by 1pm. I was on stand at 6:30. Just enjoyed the morning, then at 8am I remembered something - yesterday I'd filled out my game log, but when I went to town (where reception is better) I'd forgotten to do the telecheck for the deer I took. I looked at the phone and saw that i had a single bar of reception. AND...i felt a bowel movement coming on....so I decided to leave the stand and hot-foot it back to the cabin, where I could multi-task, doing my telecheck while in the bathroom. Mission accomplished, so I fast-walked heel-toe back to the stand. Made it back, sat down, and not 15 seconds after settling in, I saw the buck. I was coming down the lane on one side of the fenceline and he was coming in from the other side, I just beat him. What timing! Amazing! He did exactly what he was supposed to, right up to the point where he jumped up and ran out of my life.

I waited 30 mins then went to the spot where he went down - no blood anywhere!?!?! I went back to my blind and replayed my motions, then went back to look for first blood, I was in the right spot...nothing. So I went down the trail....no blood until about 30 yards, then a little, then a little more. I followed the blood down, down...and it stopped. I circled, circled, nothing. Then I turned it into a grid-type search. Got excited when just by chance I found more blood about 30 yards farther downhill, but alas, that was the last blood I'd see. Long story short, I searched high, I searched low, I searched thru cedar thickets and every blowdown I came across. I gave up a little after 4pm.

Needless to say, I'm disappointed. It's crazy. I think I must have shot him too far forward, in the shoulder. Maybe the shoulder blade deflected the .357 bullet. But still, a 180grain Hornady XTP shoulda blown right thru there. I just don't get it. He went straight down, BAMM. What the actual fuck? I gotta believe he's still walking.

What have I learned? I need to adjust my aim point back a little bit. I've been very hesitant of gut shots, but I gotta get away from that shoulder. I also think I might need to consider a new cartridge, something with more knock-down power.