Show us your wood (pile)

finelyshedded said:
Well, I went and picked up my neighbors splitter this morning but it was having issues. He said he was experiencing some sputtering with the engine the last time he used it and thinks he might have gotten some bad gas or water in the gas/engine somehow. I tried using it anyway but only got 20 minutes or so use of it before having it conk out on me. He’s letting me keep it at my place and will be over soon to help me get it going again so I can finish my run. I added some gas additive that’s suppose to get water out of the gas so I hope it helps but if not we’ll prolly just drain the tank and lines and try running some higher octane through it. Anyway I managed to take a few videos of me running it when I did get this beast running but don’t know how to upload videos here to share but here’s a few pics.
View attachment 100484 View attachment 100485
Click to expand...
Any chance he just got a new fuel cap for it? After I got a new cap for my pressure washer (old one cracked), it would run for a while, sputter, then conk out. Seems the new cap wasn’t letting air in to release pressure in the tank. It be worth a shot to loosen the cap and see if it fires up?
Likes: Big_Holla, giles, Jamie and 2 others

Check the oil? Sometimes you get a finicky low oil switch. If they get close to the add mark, as the engine gets hot it will be on the edge of the low oil tolerances.
Likes: Big_Holla, finelyshedded, giles and 1 other person

Take some seafoam spray carburetor clean and run some through the carb. Spray enough in there too stahl it a couple times when you think it’s had enough....
Likes: Big_Holla, finelyshedded and giles

I suggest grabbing the plug wire and checking for good spark.😂
Likes: Bankfish, hickslawns, Big_Holla and 1 other person

Ric also after you drain the gas spray a little carb cleaner at wide open throttle directly into the carburetor. Do this to 2 or three times after it regains its composure LOL. Another quick thing is to take a bowl off the carburetor and make sure there’s no water in it and clean it good

Those little Honda engines are pretty bulletproof. I agree with everyone else it’s probably just old gas. Change the oil just as a routine maintenance as well
Last edited: Apr 26, 2020
Likes: hickslawns and finelyshedded
B

Heating with wood this time of year sucks. Friday My wife loaded the stove at 3pm before leaving. She closed all the dampers. I didn't check temp in the house but ended up sleeping with the window open. extreme slow burns day after day with no clean out burn are the worst for chimneys. I'm tired of it. I let it go out that night. It's April 26th I'm done burning wood. My wife is cold blooded she's going to be pissed with the house being 59 degrees this morning. I'm guessing I'll here enough bitching form her and 3 kids another "ok this is it!" will be lit.....
Likes: hickslawns, giles, finelyshedded and 1 other person
B 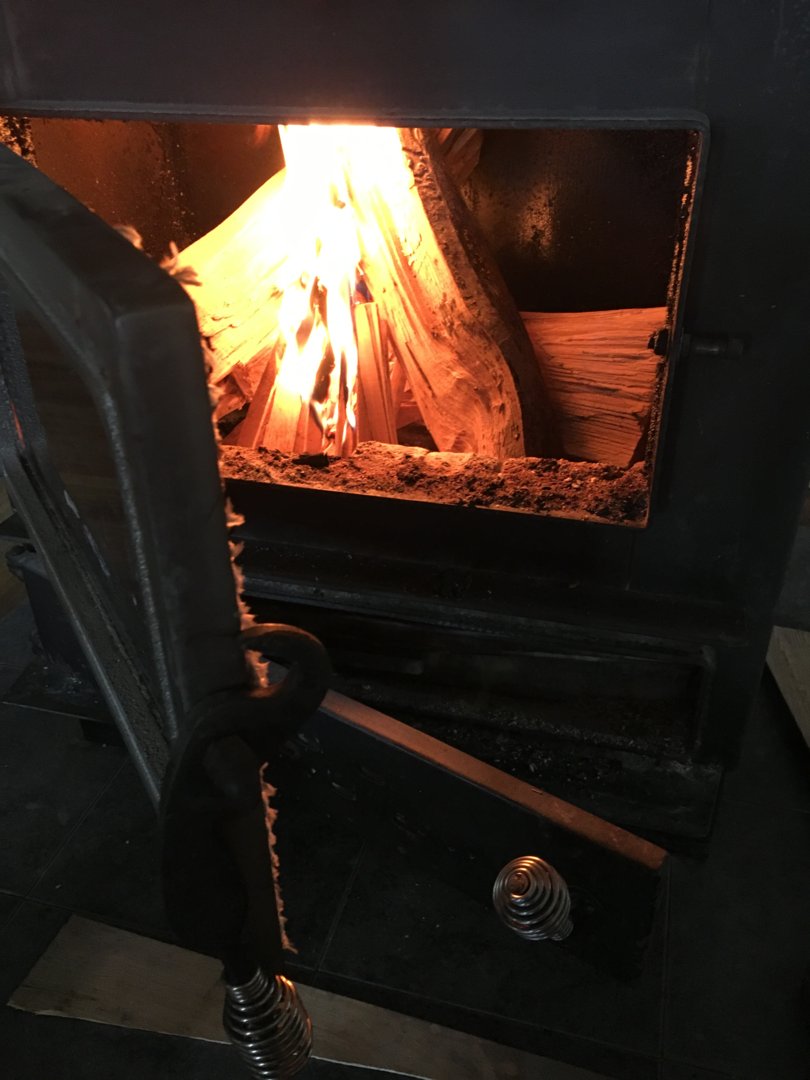 i looked closer it's 56 it here and I don't want to get bitched at on a Sunday. The end has to be near though....
Likes: MoonLab, Bankfish, hickslawns and 4 others

Thanks for all the suggestions fellas! The beauty of having an outdoor water boiler is I never have to clean the 3 ft section of stove pipe cuz when it’s gunked up or corroded I just toss it and replace. The fire hazard is outside and away from the house and I don’t have to carry wood inside to stack then have to deal with debris, bugs or critters inside. Another plus is it puts out radiant heat that that keeps the air moist and you don’t get all that static electricity and dryness we had with other forms of heat. It’s nice having propane as back up in case of emergency or wood shortage.
Likes: MoonLab, giles, Jamie and 1 other person

I got started on putting my firewood up yesterday. carried the log splitter over in the trailer, and it will stay out there until I've got all the wood split and brought home to stack. log catcher is welcome addition and does make the work easier and faster when you are by yourself. shoulda put one on my splitter years ago. my small 5'x10' trailer with some makeshift sideboards that that my neighbor put on when he borrowed the trailer many years ago can only safely carry about 100 cubic feet of wood on the highway. I need to put some better, taller sides on it so I can carry a full cord or more. with tandem axles, this trailer can carry twice the weight of a full load now. takes me about 1 1/2 hours to split and somewhat carefully stack it in the trailer by myself. about the same amount of time to unload and stack it at home. goes a little faster when I have help. 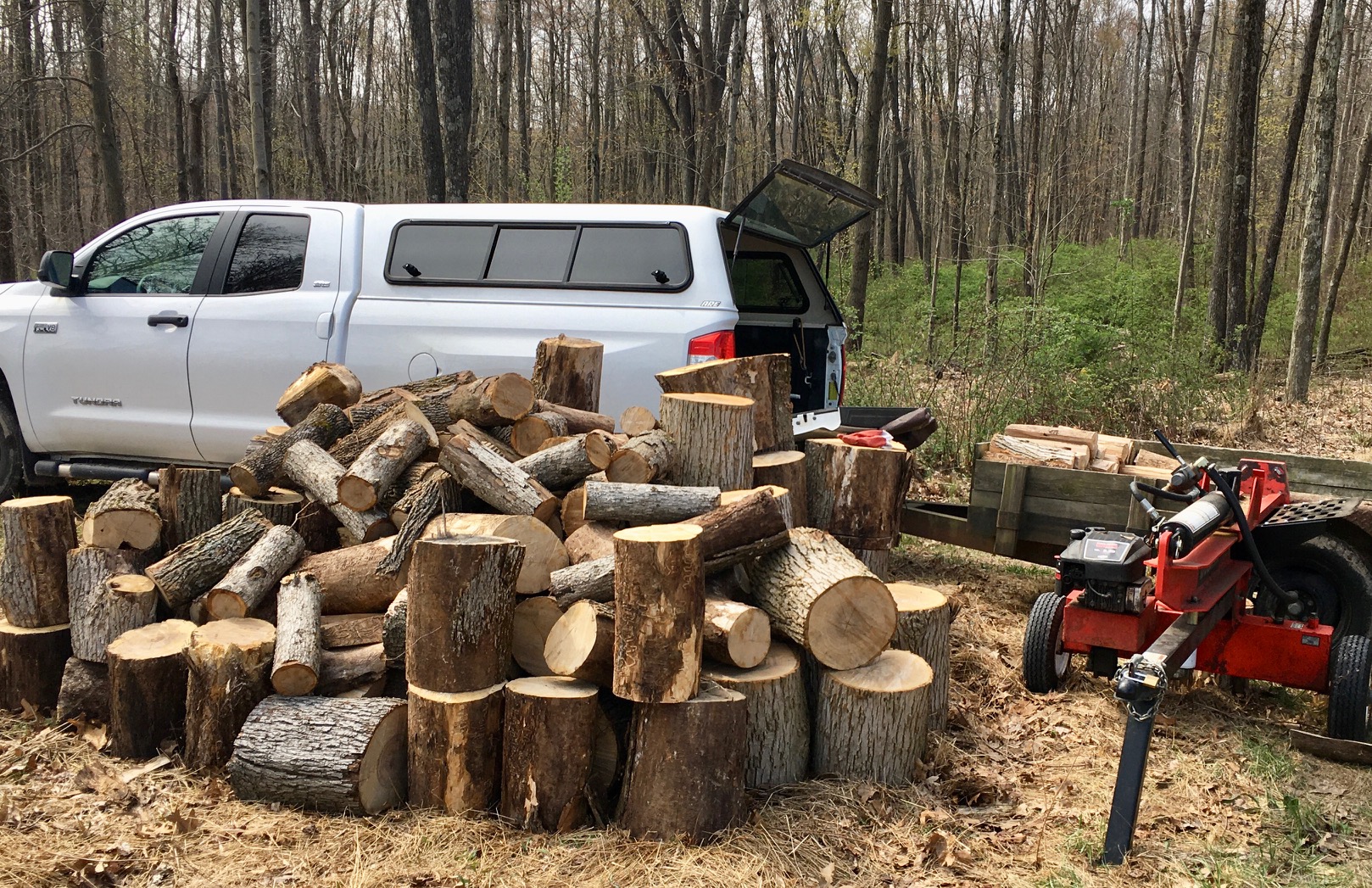 one full load was about 1/3 of this pile, maybe less. there is at least three cords of split/stacked wood in this pile. 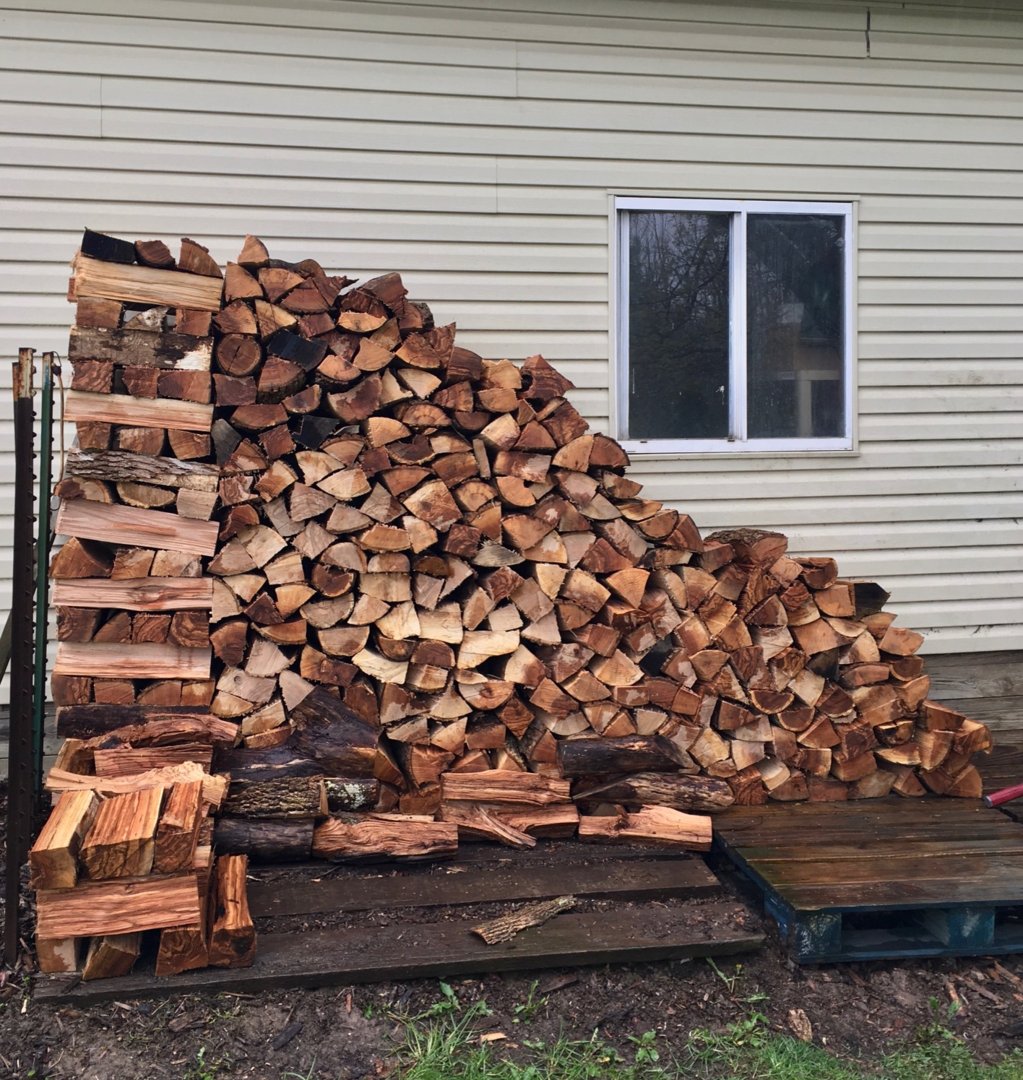 this is what 100 cubic feet of firewood looks like stacked. the end of the stack is 6' high. pieces are 18", give or take a couple. I'm gonna run out of space. will need to make a new stack somewhere or just leave the wood where it is until I have room for it here. I'm gonna have about 10 cords of wood to burn once I get all of it split and stacked. more than I've ever had at one time by a wide margin. we'll end up burning about 3 cords this year. probably have to build Nancy a fire tonight. this shit has got to stop. I refuse to run the wood stove after April 30. but burning wood in my burn pile while sitting in a lawn chair and sipping on a cold drink just to watch the flames is perfectly fine, lol.
Likes: MoonLab, bowhunter1023, finelyshedded and 5 others

I suggest grabbing the plug wire and checking for good spark.😂
Click to expand...
Stick your tongue on it.
Likes: giles and twireman

Well, my boiler sprang a leak a few days ago and I had to add a little water but today I decided to shut it down and go with our backup propane from here on out which shouldn’t be too much longer anyway.
This boiler is 15 years old and I’ve been running regular maintenance on it so I don’t think it’s anything major prolly just this gasket going bad around this portal where an anodizing rod extends into the bottom of the water tank. 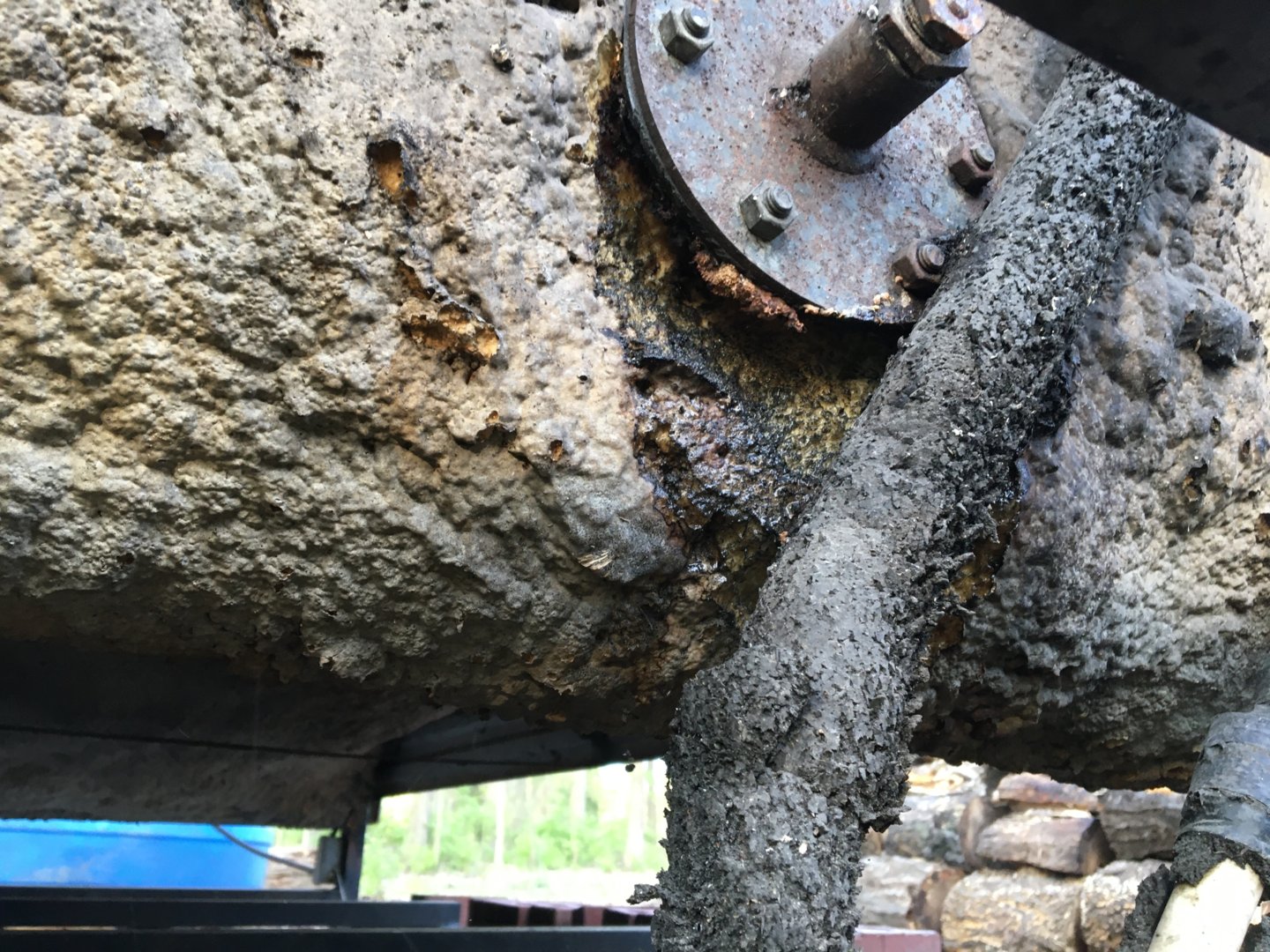 I guess it was bound to happen eventually but I’m glad it happened now instead of earlier when it was colder. Anyway, I’ve got a new gasket on order, along with a new rod and 3 more quarts of chemical in preparation of this fall. I’ll just let the water drip on out and I’ve already switched thermostat over to emergency heat. I hope it doesn’t get below freezing from here on out but if it does I’ll just blow out the lines inside the boiler.
Now I’ll just continue replenishing my firewood reserve and make sure leak is fixed before firing it back up in October.
Likes: MoonLab, Big_Holla, hickslawns and 5 others

Hoping for the best outcome Rick. Can't complain about that after 15yrs!
Likes: MoonLab and finelyshedded

Ric, your outlook on things is amazing! Never let that change👍🏼
Likes: MoonLab, Big_Holla and finelyshedded

Sitting out with a fire tonite.still burning overnight to keep chill down. 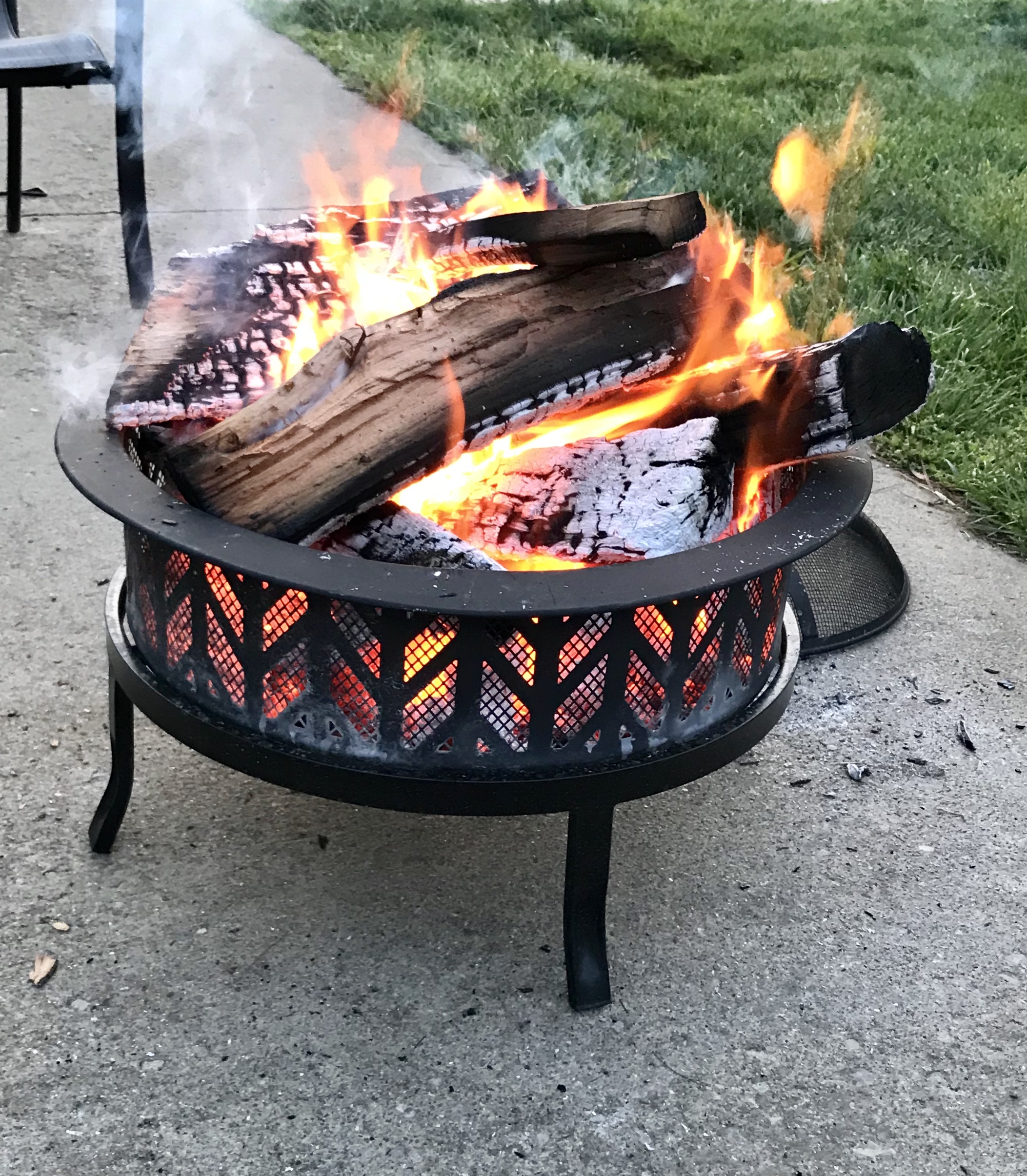 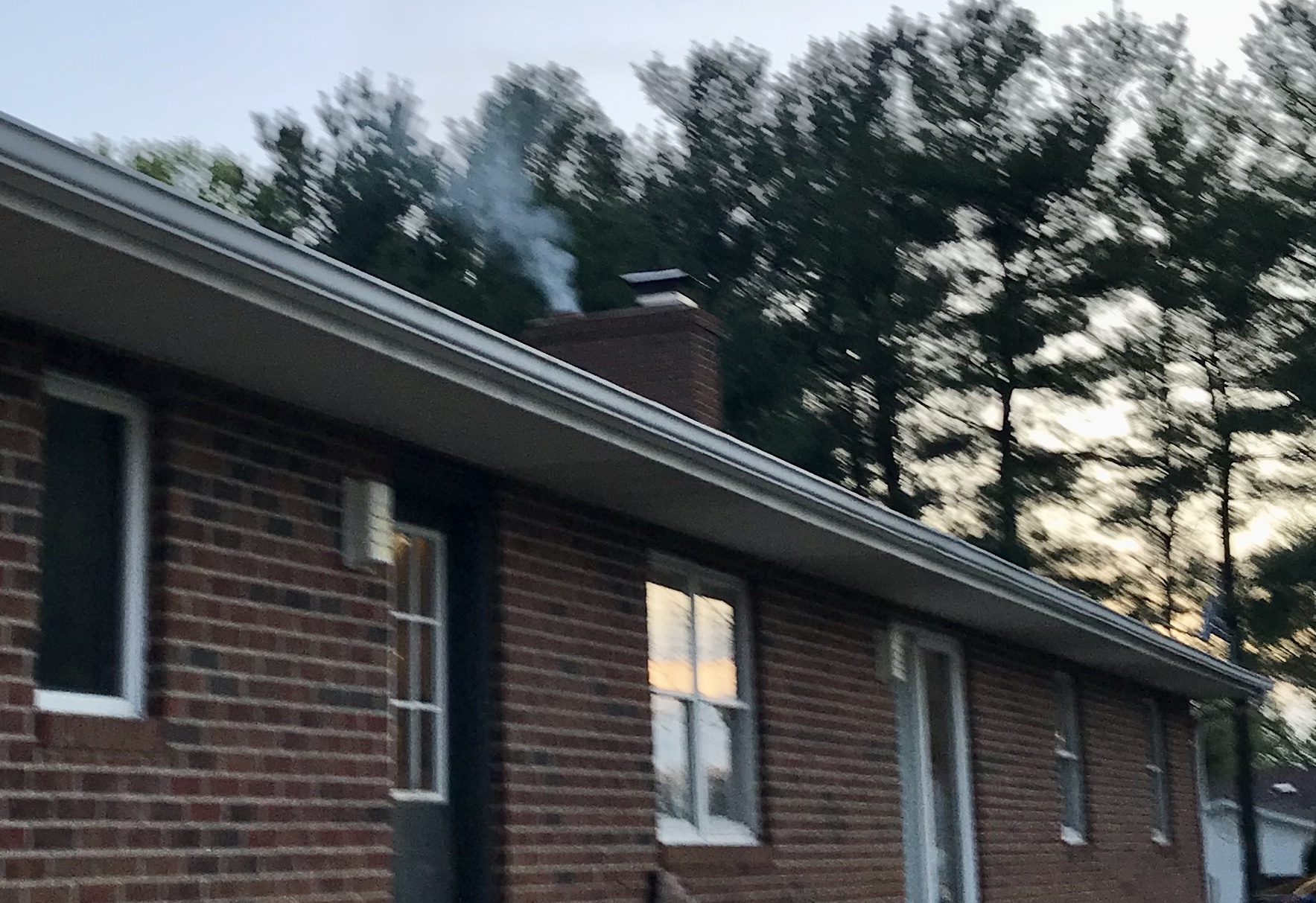 Likes: bowhunter1023, hickslawns, Big_Holla and 5 others 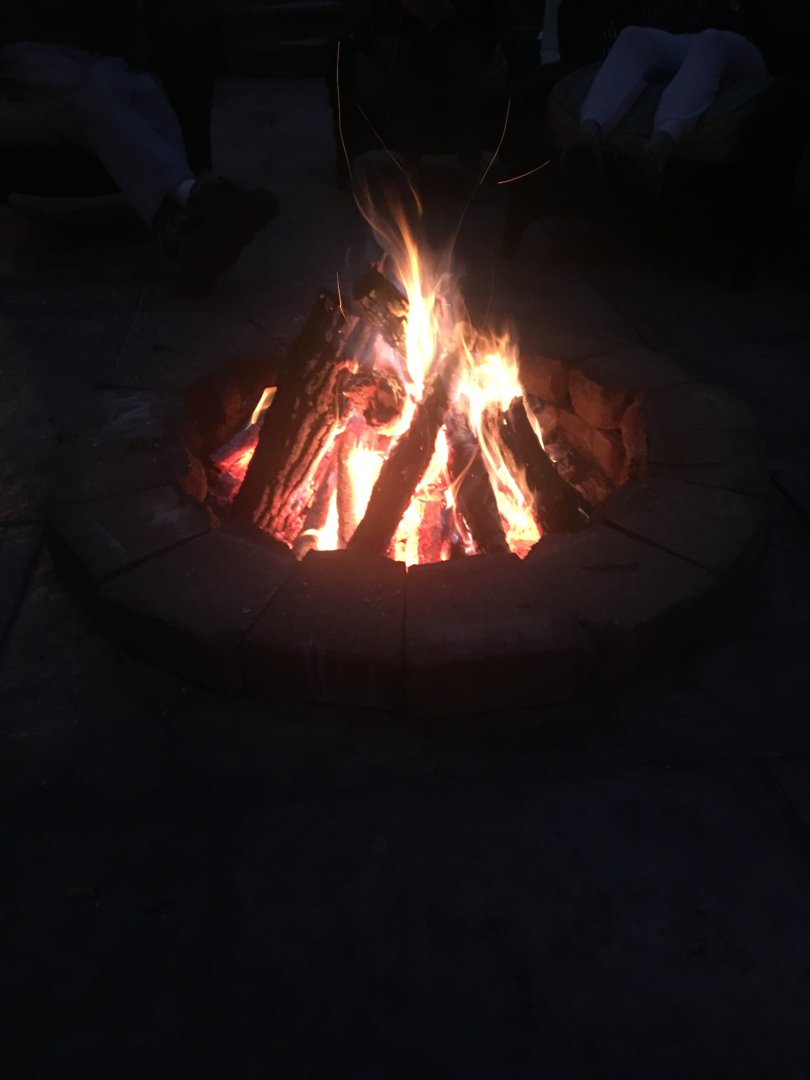 Likes: Jamie, Big_Holla, MoonLab and 5 others

"J" said:
That’s one relaxing photo right there!!!! Good job, Ric...
Click to expand...
We had K out there most of the afternoon till 9:30 tonight and I believe the sunshine, Johnsonville brats and fire reenergized her spirits some. 👍🏻🙏😎
Likes: Jamie, Dustinb80, hickslawns and 5 others

Been waiting for this. BIL was here earlier. Fire going. Perfect weather. Some of the wood brutus split up. The smell of wood burning are the best 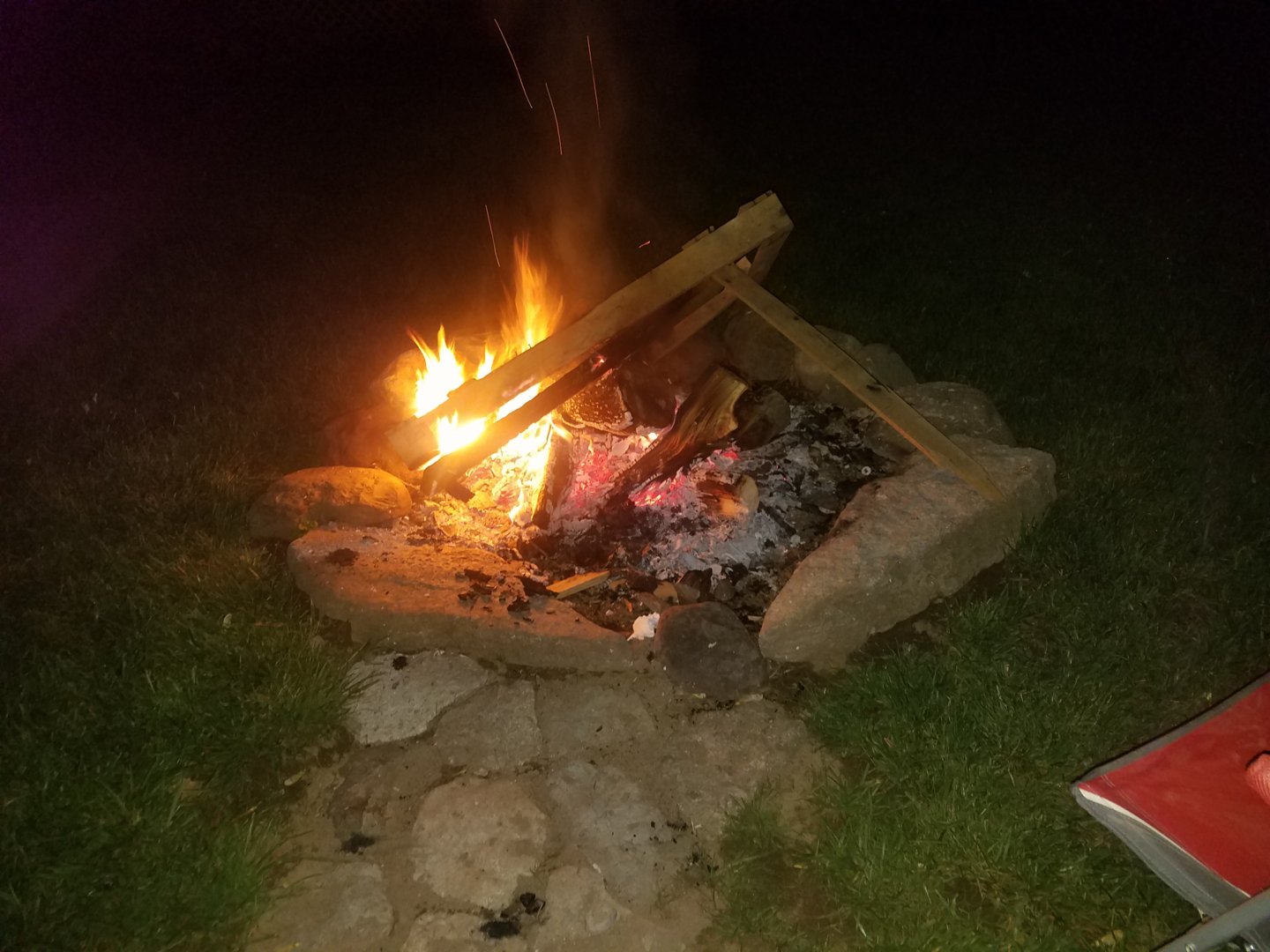 Likes: Jamie, giles, twireman and 3 others

finelyshedded said:
We had K out there most of the afternoon till 9:30 tonight and I believe the sunshine, Johnsonville brats and fire reenergized her spirits some. 👍🏻🙏😎
Click to expand...
That’s a good update right there, buddy!!!!
Likes: finelyshedded and MoonLab